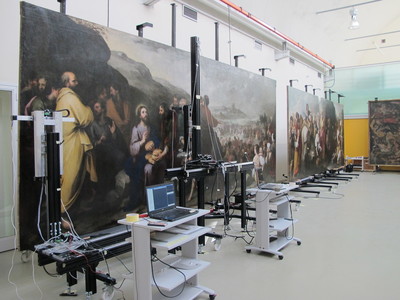 In February and March 2018, Factum Foundation digitised two large paintings by Bartolomé Esteban Murillo – The Miracle of the Fish and Bread and Moses drawing water from the rock – at the Instituto Andaluz de Patrimonio Histórico in Seville.

The Lucida 3D Scanner was employed to scan the surface relief and colour information was captured using a technique known as panoramic photography, a method of obtaining high-resolution data by taking multiple images that are then stitched together. The data will become part of a multi-layered digital archive encompassing other analyses carried out at the IAPH. As part of the project, the paintings' two ornate gilded frames, made by Bernardo Simón de Pineda, one of the preeminent altarpiece sculptors of 17th century Seville, were also digitised with close-range photogrammetry. Given the problems many 3D recording systems have with shiny objects, the digitisation would have been considered almost impossible a couple of years ago.

This project was carried out in collaboration with the Hermandad de la Santa Caridad, the Caixa Foundation and the IAPH. Both paintings are currently on view at the exhibition “Murillo cercano: Miradas cruzadas” at the Hospital de la Claridad in Seville. To learn more about Murillo's work in Seville click here. 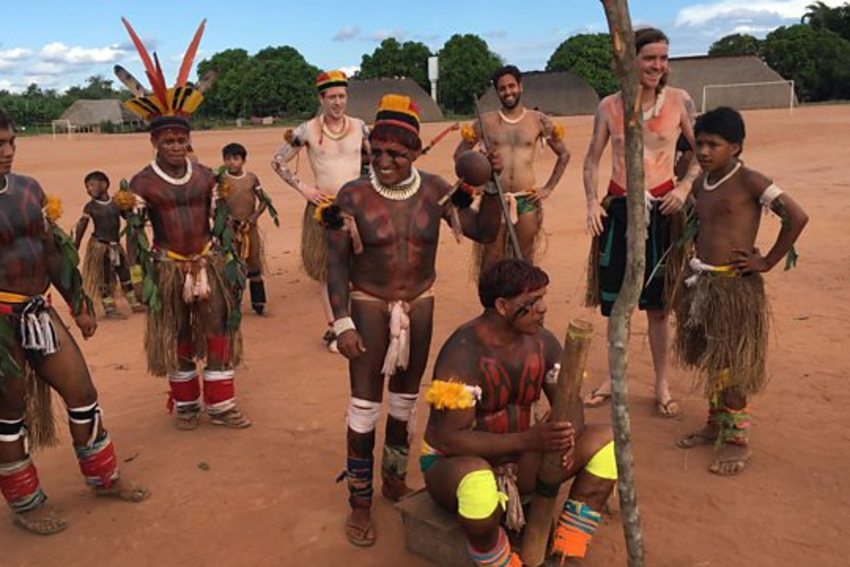 The Voices of the Amazon

A radio programme that explores the culture of the Kuikuro people and is presented by one of Factum's long-term collaborators, Jerry Brotton, is now available on the BBC World service. The programme was recorded alongside Factum Foundation's work with People's Palace Projects and Takuma Kuikuro in Xingu last May. 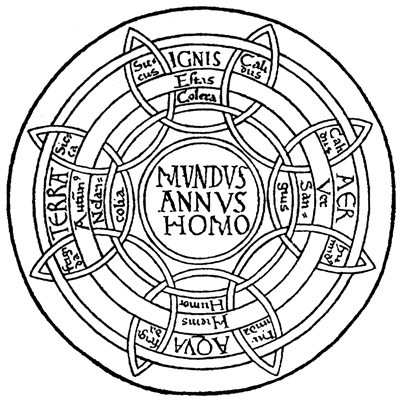 Mediation and Transformation - Alchemy and New Technology: Adam Lowe at the Warburg Institute

On May 9th, Adam Lowe is talking about Factum Foundation's work at the Warburg Institute, London, as part of the lecture series Re-Opening the Workshop: Medieval to Early Modern. The talk will provide a contemporary perspective on the series' focus on workshops and artists' studios as sites for the transmission of ideas and skills. 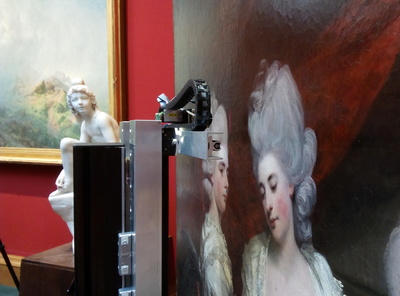 In January 2018, Factum Foundation and Strawberry Hill House renewed their effort to restitute Horace Walpole's art collection to its original location. Factum Foundation recorded Joshua Reynold's The Ladies Waldegrave (1780), which was commissioned by Horace Walpole, the great-uncle of Laura, Maria, and Horatia Waldegrave, the three sitters depicted in this work. The painting originally hung in Walpole's house in Strawberry Hill but it was sold 1842 and it entered the collection of the National Gallery of Scotland in 1952. 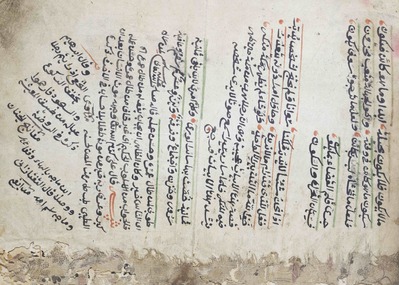 Digitising a collection of oriental manuscripts in Makhachkala, Dagestan

Factum Foundation's Photographic Manuscript Scanner was installed at the Institute of History, Archaeology and Ethnography in May 2017. Since that time, operators at the IHAE have used this scanner to record over 109,000 manuscript pages with resolutions of 800 dpi at 1:1. This extraordinary project to record and conserve the IHAE's collection of oriental manuscripts is ongoing since late 2015 and has been developed in conjuntion with the Ziyavudin Magomedov Charitable Peri Foundation (Moscow, Makhachkala), the Juma al Majid Centre (Dubai) and the IHAE (Makhachkala).

Read more about the project on the Factum Foundation website. 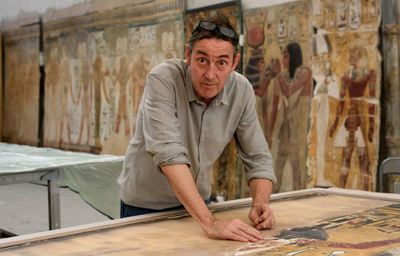 Recently, various news outlets have published stories about the different projects carried out by the Foundation. On December 3rd, the programme Guardians of Heritage of the German History Channel broadcast a show about our use of technology and craftsmanship to help save heritage. Newsweek, CNN, PBS and El Pais have also written reports and videos about the Foundation´s projects. See what they said about our work. 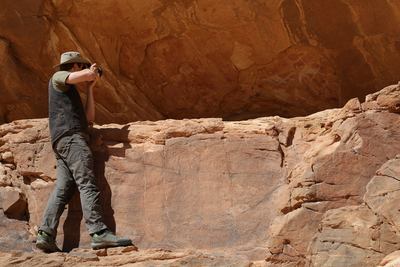 Factum Foundation has returned to Chad

Ferdinand Saumarez Smith and Arthur Prior have returned from a three week expedition in the Tibesti region of Northern Chad, continuing Factum Foundation's collaboration with the Trust for African Rock Art (TARA) to document prehistoric rock art sites in the region. For further details of Factum Foundation's work with TARA see: http://africanrockart.org/ 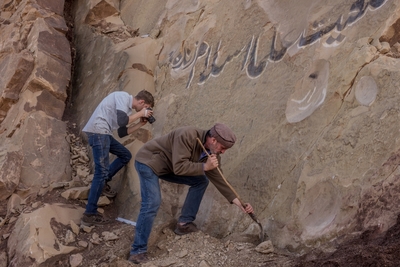 As part of our first practical collaboration with Iconem in Pakistan, Factum Foundation´s Ross Davison and Luke Tchalenko carried out the high-resolution recording of a fossilized footprint in motion. The imprint was captured using a combination of systems, including photogrammetry and drone recording. The high-resolution information obtained will be used to make an exact facsimile for the Pakistan Museum of Natural History in Islamabad. While the team recorded these footprints in Pakistan, the BBC reported that vandals damaged an ancient dinosaur footprint in Australia. This sad news demonstrates the obvious need to train local teams and transfer technologies to record heritage in danger. 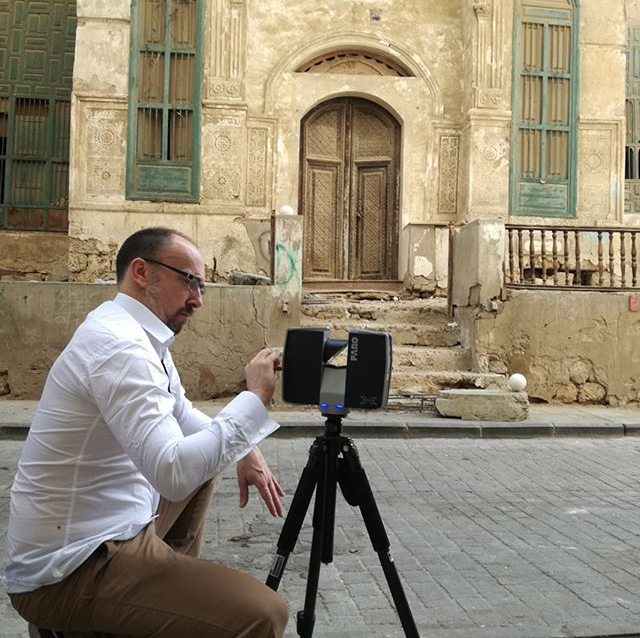 Factum Foundation’s Pedro Miró and Otto Lowe traveled to Jeddah (Saudi Arabia), as part of a pilot project with Art Jameel documenting vernacular architecture and training Saudi students in photogrammetry for cultural heritage preservation. During their time there, they recorded the surface of three traditional buildings in the old city by taking more than a 3,000 photographs at each site using both photogrammetry and the Faro Focus laser scanner. Preliminary processing demonstrates both the precision and adaptability of these two technologies. They also recorded trained students from Jameel House of Traditional Arts located in Al Balad, Jeddah and practiced recording architectural details details with them. 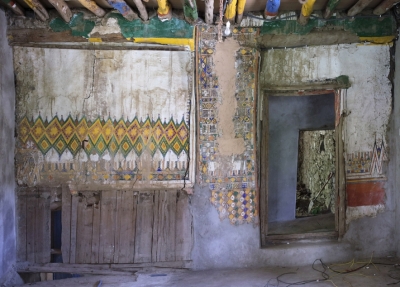 The Foundation, working with Art Jameel, has been on a fact finding mission that has involved the recording of some of the remaining examples of the delicate and discrete qut wall paintings. This image from Rijal Alma was recorded just before rebuilding was about to take place. As the country modernises and builds, the preservation of the remaining evidence of its deep cultural history is of great importance. Ali Moghawi was the guide for the visit. As always, in depth local knowledge is critical to an understanding of the specific challenges facing the protection of cultural heritage in the region. The artist Ahmed Mater accompanied Adam Lowe, Gabriel Scrapa and James Macmillan Scott and provided a unique insight into the needs of contemporary artists in the region. 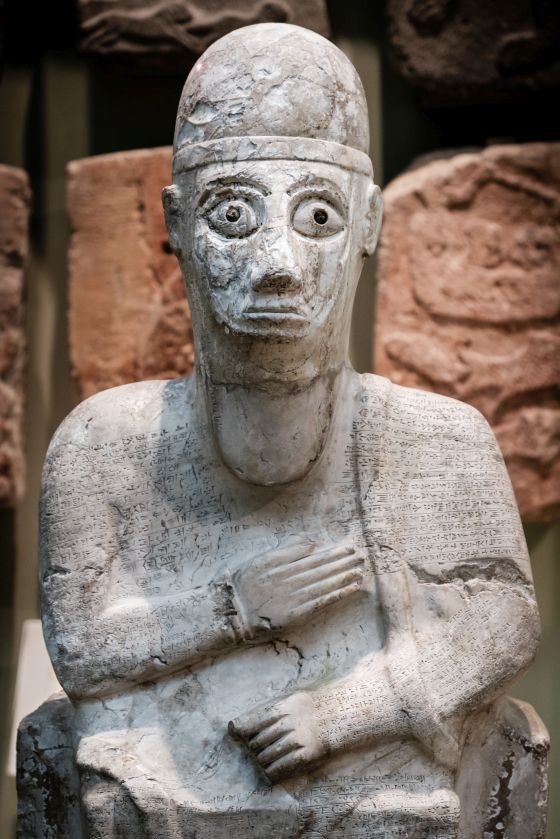 3D model of the statue of Idrimi

The statue of Idrimi, a refugee from Aleppo who rose to become the king of Alalakh in southern Turkey 3,500 years ago, was recorded and scanned last February at the British Museum. A 3D model of the recorded data is now available on Sketchfab. The Factum Foundation will make a facsimile of the statue and donate it to to the UK charity Making-Light to be part of its exhibition Syria Past and Present. The statue of Idrimi has never left the British Museum because of conservation concerns.

Click on the link to read a review of the project published on Current Archeology. 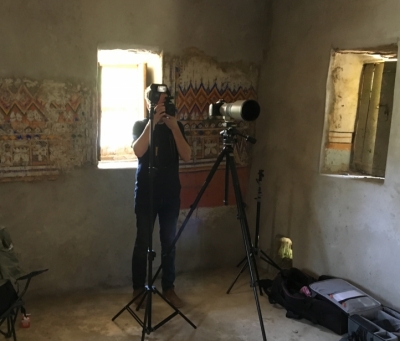 Adam Lowe presented a talk at Project Space Art Jameel in Dubai entitled Traditional and Digital Artisans Meet, exploring the ways in which new technologies are being used in both architectural conservation and contemporary art. Using Stoppelaëre House in Egypt as a case study in technology transfer, training, and the use of non-invasive means for preservation, the discussion focuses on the importance of sustainable tourism. The talk also describes a more recent collaboration with Art Jameel, training students at the Jameel House of Traditional Arts (Jeddah) techniques in scanning and documenting the architectural heritage of Al-Balad, a UNESCO World Heritage Site. 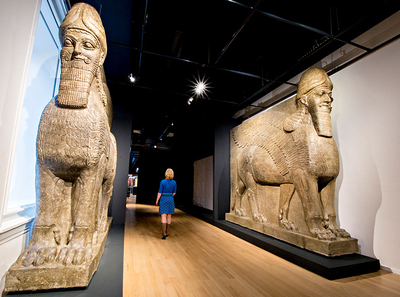 The exhibition Nineveh: Heart of an Ancient Empire at the Rijksmuseum van Oudheden has on view two Lamassu re-materialized by the Foundation. The originals were recorded at the British Museum in 2014. The Lamassu will be donated after the exhibition to the Ashurbanipal Library in the University of Mosul, as a gift from the British Museum, the Rijksmuseum and Factum Foundation to replace the plaster casts donated in 2014 and destroyed or sold by IS. See how these Winged Lions were digitized and re-materialized. 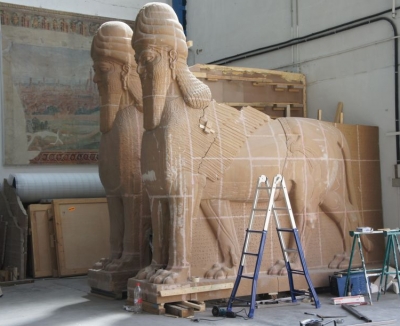 Jeffrey Brown from PBS NewsHour visited Factum last March to learn more about our work both at Factum Arte and the Foundation. His piece focuses on our approach to understanding and preserving the integrity of cultural objects and heritage. Click here to watch the video. 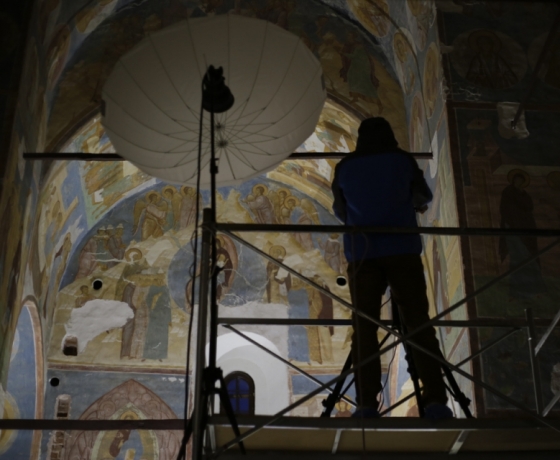 Following a long journey to a landscape of pristine lakes and forests in northern Russia, the 11th of May marked the beginning of a three-month recording session at the Ferapontov Monastery, a UNESCO world heritage site. Teams from Factum and the Peri Foundation are working every evening in the Cathedral of the Nativity of the Virgin to photograph over six-hundred square meters of frescoes painted in 1502 by the renowned icon painter Dionisy. High up on a wheeled platform, which will eventually reach more than ten meters for the recording of Christ in the cupola, Peri and Factum photographers have already captured a number of scenes from the southern wall, including the miracle of St Nicholas expelling the devil from a fantastical tree in bright ochres and reds, and light greens. After data processing, the high-resolution 'snapshot’ will aid the monastery museum in its ongoing conservation effort to maintain the delicate condition of the frescoes and will also provide an invaluable resource to historians of Russian and Byzantine art around the world. 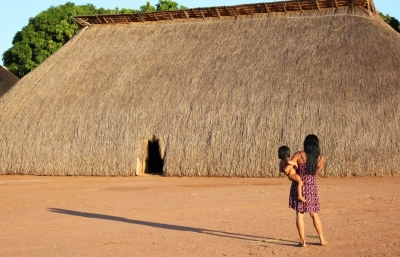 A team from Factum Foundation has just returned from the upper Xingu region of the state of Mato Grosso, Brazil, where they participated in People’s Palace Projects collaboration with the indigenous filmmaker Takuma Kuikuro. Factum’s team made a complete LiDAR scan of Takuma’s village, Ipatse, photogrammetric recordings of human artefacts and features of the natural environment using a drone. The work is intended to contribute both to Takuma’s filmmaking and Ipatse’s planned cultural centre in the nearest town, Canarana. 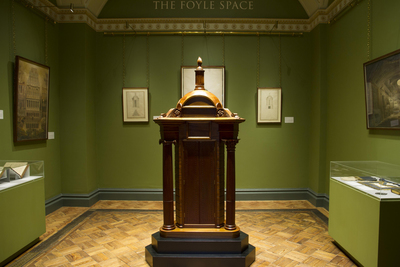 Factum Foundation's Ferdinand Saumarez Smith has written a new article exploring the conceptual background to the exhibition 'Soane's Ark: Building with Symbols' as a 'Think Piece' for the Architectural Review. Click here to read it.

The exhibition closes on the 21st of January. 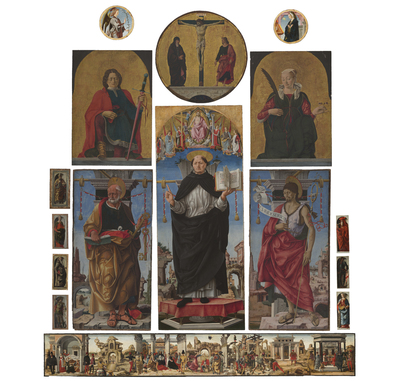 On October 1st, 2017, the facsimiles of all known panels of the Griffoni Polyptych were installed in the St. Vincent Ferrer Chapel in the Basilica of San Petronio in Bologna, their original location. The altarpiece returned to San Petronio after a 200-year absence in time for Pope Francis visit to the Basilica. The panels were removed from the Chapel in the C18th and were sold as separate paintings. The original panels of this altarpiece are now preserved in various collections including the National Gallery, Pinacoteca di Brera, the Palazzo Cini, the Vatican Museum and the National Gallery of Art. For more information about this project, click here.