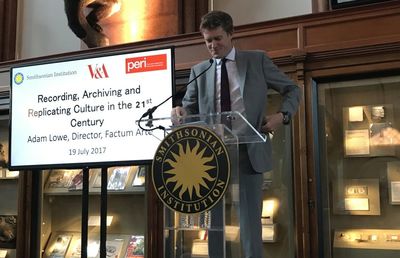 Factum Foundation will participate this September in the “Reproduction of Works of Art and Cultural Heritage” (ReACH) roundtable at the Hermitage Museum with the V&A and Peri Foundation. ReACH celebrates the 150th anniversary of Henry Cole's 1867 Convention for Promoting Universally Reproductions of Works of Art for the Benefits of Museums of All Countries by establishing a recording strategy that benefits local institutions while ensuring public access to heritage data. ReACH is organising a series of international symposia to discuss new approaches to digitizing and reproducing cultural heritage. Tristam Hunt, Director of the V&A, spoke at the second event at the Smithsonian and introduced Adam Lowe’s presentation. 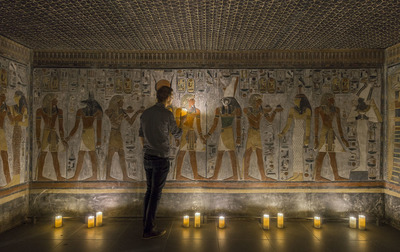 Scanning Seti: The Regeneration of a Pharaonic Tomb is exhibited at the Antikenmuseum Basel and will remain on view until May 6th, 2017. Scanning Seti is a presents the evolution of the tomb of Seti I since its discovery in 1817 by Giovanni Battista Belzoni to the present day. The exhibition features a full recreation of the Hall of Beauties as it looked in 1817 based on Giovanni Battista Belzoni´s famous watercolours. The public can also walk through a 1:1 facsimiles of rooms I and J. These replicas incorporate the facsimiles of fragments removed from the original tomb in the XIX century and now preserved at the Louvre, the British Museum, the Archeological Museum in Florence, and the Pergamon Museum.

Discover the exhibition Scanning Seti: The Regeneration of a Pharaonic Tomb. or click here to learn how these facsimiles were made. 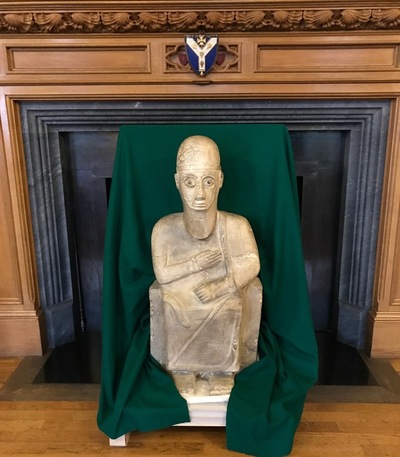 On September 27th, at Lambeth Palace, the Archbishop of Canterbury and Making Light launched an initiative to present new voices of Syrian refugees. Factum Foundation supported their efforts by recording the statue of Idrimi at the British Museum and creating a 1:1 replica. Idrimi was forced to flee Aleppo about 3,500 years ago. The re-materialized statue of the King of Alalakh is the embodiment of the resilience and determination of all Syrian refugees.

See the 3D model or read a review of the project published by Current Archeology. 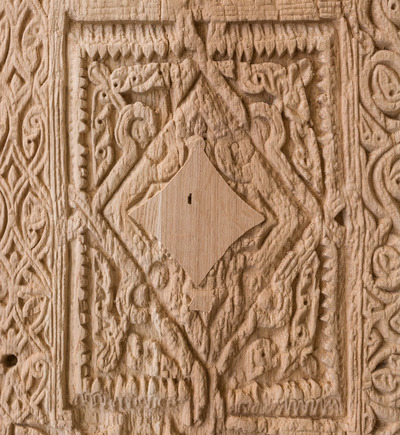 The State Hermitage Museum in St. Petersburg is hosting the exhibition ‘IDENTIFICATION’ to coincide with the third event of ReACH, a series of international symposia led by the V&A and the Peri Foundation to discuss the digitisation and reproduction of cultural heritage.

Organised by the Peri Foundations the exhibition traces the history of Kala-Koreysh, one of the oldest Islamic settlements in Dagestan, through interpretations of the inscriptions and ornaments on the tombstones in the mosque cemetery. It is designed as a journey of discovery in which the viewer is encouraged to use different techniques, materials, and data to ‘scan’ the layers of information in these objects. Factum Foundation participated in the recording of Kala-Koreysh in 2016 and has now produced facsimiles of two of the most important tombstones and a pair of doors from the mosque. The tombstone facsimiles were digitally carved in limestone and the doors, intended for eventual installation at the mosque, in oak. 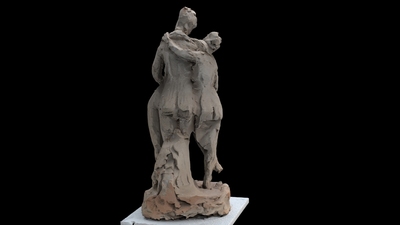 The Civic Museum of Bassano del Grappa has partnered with the Factum Foundation to digitize the work of Antonio Canova. The collaboration began with the digitization of Canova´s Three Graces using a combination of recording techniques including photogrammetry and a white light scanning. The Foundation will continue to digitize more than 2000 drawings donated by Giambattista Sartori, the brother of the sculptor. The aim of this project is to promote the study and access to drawings that under normal circumstances cannot be exhibited to the public because of conservation issues. 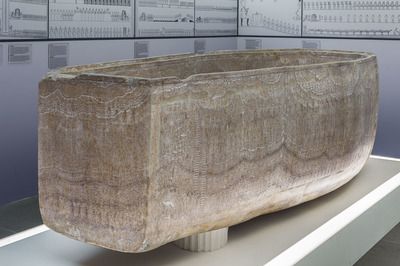 On Monday, November 27th, Joanna Tinworth, Curator at the Sir John Soane's Museum, and Adam Lowe, discussed the importance of recording the sarcophagus of Seti I and the role this data in preparing the exhibition Egypt Uncovered: Belzoni and the Tomb of Pharaoh Seti I currently on view at the Soane Museum in London.

As part of the events marking the bicentennial of the discovery Seti's tomb by Giovanni Battista Belzoni, they discussed Soane's engagement with this important object and its continued appeal to visitors and researchers alike. The Foundation has also produced a facsimile of the sarcophagus for the exhibition Scanning Seti - the regeneration of a pharaonic tomb at the Antikenmuseum Basel. Adam Lowe will discuss the technologies and processes used to create this replica and how this facsimile can help visitors understand the sarcophagus in a different way. 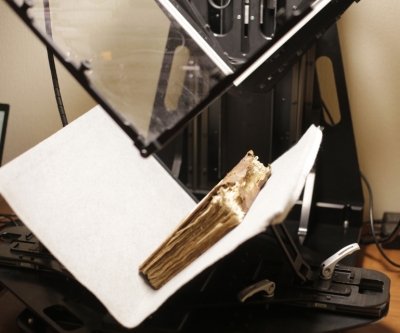 A new book scanner in Daghestan

With the support of the Peri Foundation, the new Factum Foundation book scanner was installed at the Institute of History, Archaeology and Ethnography (IHAE) in Makhachkala (Dagestan). The IHAE will start using this scanner to record their collection of over 3000 Islamic manuscripts, but this transfer of technology marks only the beginning of a long-term project that will eventually see the digitisation of an estimated 25,000 manuscripts held by private individuals, mosques, and madrasas in the region. Whilst the Factum team were in Makhachkala, Shamil Gadzhidadaev and Gennady Viktorov, two Dagestani photographers who learned 3D digital recording at Factum Arte (Madrid) in 2016, were themselves training two new photographers for another Peri/Factum project that will take place in northern Russia this summer. 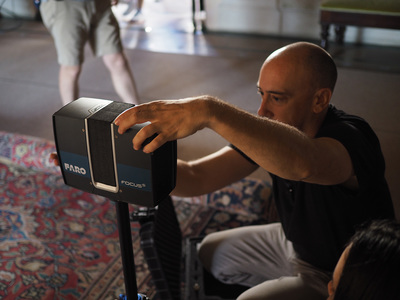 In early October, a team from Factum Foundation spent three days in Seville for the recording of various elements of Casa de Pilatos. As part of our collaboration with the Fundación Casa Ducal de Medinaceli, which started with the recording of Cardinal Tavera's tomb, this project aims at applying digital technology to the recording and preservation of one of Medinaceli's great treasures. The Casa de Pilatos, one of the main Renaissance palaces in Europe, contains a unique collection of Cuenca-style azulejos from the 16th Century, as well as an impressive collection of art and archaeology artefacts. Various non-contact methods were employed to obtain high-resolution 3D and colour information of a selection of elements, including the Lucida 3D Scanner, close-range photogrammetry, Lidar 3D scanning and panoramic colour photography. The team was formed by Pedro Miró, Gabriel Scarpa and Carlos Bayod with Abhijit Dhanda, an intern from Carleton University. This initiative will provide a comprehensive digital archive of the current conservation state of the Casa de Pilatos and will lead to further collaborations to disseminate the importance of the site. 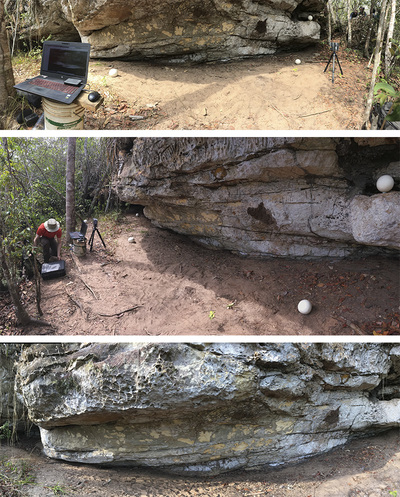 A team from Factum Foundation has returned from the Xingu region of the Amazon where they discovered the destruction of a uniquely important petroglyph site.

The vandalised cave is home to the mythical hero Kamukuwaká, an extra-human entity that travels up into the sky villages to bring the ancestral knowledge associated with the ethical standards of traditional leadership to the Xinguan people. Concurrently, Upper-Xinguan tradition situates the first Pohoká ritual of ear-piercing, the ritual of initiation of young leaderships, in the archaeological village adjacent to the cave.

Widely reported in the Brazilian media, the tragedy highlights the importance of preemptive 3D recording and will form the centrepiece of Factum’s upcoming project for the Venice Biennale in 2019. 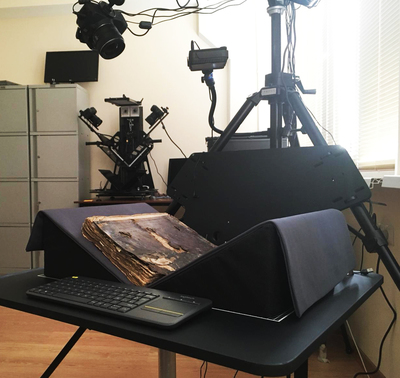 A team from Factum Foundation is in Dagestan to install a new portable manuscript scanner for the Institute of History, Archaeology and Ethnography in Makhachkala. The scanner will be taken on expeditions into Dagestan's mountains as part of a long-term campaign to digitise and study the thousands of Islamic manuscripts held by private collections in the region.

Factum, in collaboration with the Peri Foundation, has been working with the IHAE since 2016. The project has involved the creation of high-resolution book scanning systems integrated by means of custom-designed software for sustainable data storage and preservation.

Read more about the project here. 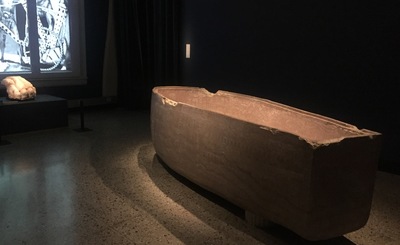 The exact facsimile of the sarcophagus of Seti I, produced in 2017 by the Factum Foundation and initially part of the exhibition "Scanning Seti: The regeneration of a Pharaonic Tomb", is currently on view at the Museum of Cultural History in Oslo. The objects in the new exhibition "Images of Egypt" intend to reflect an ancient landscape in radical transformation.

"Images of Egypt" shows the monumental book Description de l'Égypte (1809-1829) with the amazingly detailed illustrations of Napoleonic drawings, but also the image flood that followed the wake of the French invasion and which made ancient Egypt a part of western modernity. Temples, obelisks and sarcophagi were exported to the whole world; followed by newspaper reports on groundbreaking logistics and engineering, sketches and prints, panoramas, paintings, photography and postcards. "Images of Egypt" shows works in this tradition; among them exclusive Sévres porcelain, commissioned by Napoleon, architect Karl Friedrich Schinkel's scenographs to Mozart's Magic Flute (1815) and David Hockney's sensational scenarios for the same 1977 opera, recently excavated plaster antiques from the film set of Cecil B. DeMille's biblical epic The Ten Commandments (1923) and Factum Foundation's facsimile of Seti's sarcophagus (in collaboration with Arte). 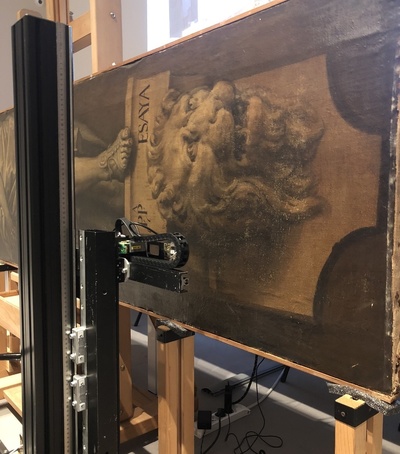 During the exhibition Homo Faber: Crafting a more human future (14-30 Sept. 2018) at the Fondazione Giorgio Cini in Venice, two works by Italian Renaissance painter Paolo Veronese were digitised with the foundation's Lucida 3D scanner. In collaboration with Open Care's Department of Conservation and Restoration (Milan), Factum Foundation is scanning Veronese's diptych, depicting the Prophet Isaiah and the Prophet Ezekiel, owned by the Gallerie dell'Accademia. The data, gathered before and after the diptych's restoration, will be used to inform and document the cleaning of the paintings.

As part of this initiative, a practical workshop on surface 3D scanning was carried out by a team from Factum Foundation on September 21st - applications open here. 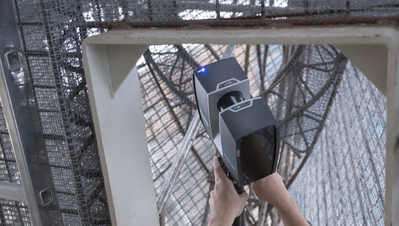 Over the last few weeks, we have started the recordings of Raphael's cartoons at the V&A Museum in the UK, the ferroconcrete Research Vessel Heraclitus in Spain and a rock art cave under threat from flooding as a result of deforestation in Brasil... The beginning of September 2018 preludes amazingly busy months for the Foundation's team, with a clear focus on demonstrating the importance of documenting, monitoring, studying, recreating and disseminating the world’s cultural heritage through the rigorous development of high-resolution recording.

Stay informed by subscribing to our newsletter. 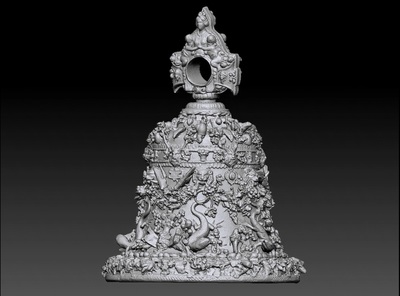 Recording the Cellini Bell at the British Museum

The extraordinary 'Cellini Bell' by Wenzel Jamnitzer (1507/1508 to 1585) was recently recorded at the British Museum in London. This highly intricate cast and chased silver bell was amongst the most difficult objects Factum Foundation has ever recorded. It is now being replicated in silver using several techniques to try to retain the extraordinary level of detail that characterises Jamnitzer's work. It will be included in the exhibition Lost Treasure of Strawberry Hill (20th October - 24th February 2019) in Twickenham. 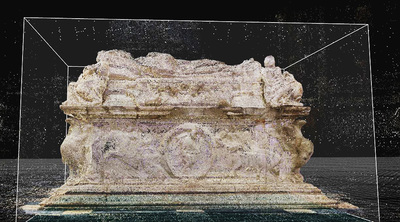 The recording of the tomb of Cardinal Tavera initiated a collaboration with the Fundación Casa Ducal de Medinaceli that is a great example of what is possible when different foundations work together to record, archive, analyse, preserve and communicate the importance of Cultural Heritage.

The first stage of the work, the complete high-resolution recording of the tomb is now finalised. The captured data was processed using the photogrammetry software Reality Capture.

The registration is now open for the Digital Transformation teaching programme that will be given by Carlos Bayod Lucini, Project Director at Factum Foundation. The programme is an initiative from the Fundación Amigos Museo del Prado and will be held in Madrid from 6 to 27 March 2019.

About the programme: Digital technology is changing methods and results in both artistic creation and heritage conservation. The growing advances in software and capturing systems (3D scanning, photogrammetry), visualization (virtual reality, augmented reality) and manufacturing (3D printing) are making possible a different interaction with our cultural environment. The diffusion of new technologies and their combination with traditional techniques greatly increase the creative and productive possibilities. The figure of the digital craftsman appears, a mediator between the physical and virtual world, while multidisciplinary teams are increasingly necessary for the development of innovative artistic projects. The new technologies favor, in short, the development of complex creative processes in which digital allows a more direct access to the material. 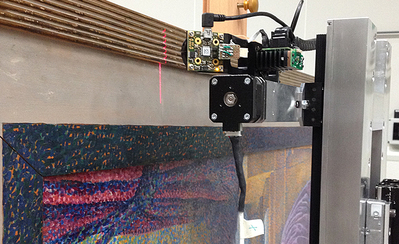