Over recent years 3D scanning has become part of a coherent and non-contact approach to the documentation of cultural heritage and its long term preservation.
High-resolution 3D recordings of sites, monuments and artifacts allow us to monitor, study, disseminate and understand our shared cultural history – it is essential that the vast archives of 3D and colour data are securely archived. An integral component of this work is to record surfaces and forms at the highest possible resolutions and archive them in raw formats, so the data can continue to be re-processed as technology advances. In some cases the data will need to be re-materialised as a physical object - and this is where a great deal of misunderstanding exists.

Digital used to be associated with virtual but now the ability to re-materialise data as physical three dimensional objects is demanding new explorations into the types of information the data contains. The levels of damage and destruction of heritage sites caused by mass tourism, wars, iconoclastic acts, the ravages of time, commercial imperatives, imperfect restoration and natural disasters has led to a re-evaluation of the importance of high resolution facsimiles. This approach is helping visitors understand the complexity involved in preservation and is leading to a renegotiation of the relationship between the original and the authentic. Exact facsimiles are being made possible through advances in 3D recording, composite photography, an assortment of multi-spectral imaging techniques, image processing and output technologies.

A number of different 3D scanning methods exist, each with their own advantages and limitations. The challenge is to identify the right system for the right application. No one system can do everything. The diverse methods of capturing 3D data evidences this. Time of flight, triangulation, photogrammetry and a host of different approaches are redefining the relationship between image and form. The 3D data can be on a vast scale, recording the topography of a landscape from great distances or it can be close range and accurate enough to document the surface of a carving; marks that are not easily visible to the human eye can be visualized for epigraphic study or condition monitoring.

While some systems can obtain colour data as well as 3D information, currently no 3D scanner is able to record colour to the standard required for the production of an exact replica. All 3D recording is based on metrology; the science of making measurements. Outlined below are the main techniques and scanners used at Factum Arte and the reasons they are used in the way they are.

The Long-Medium Range 3D Scanners are used to record the general shape of large objects and surfaces with the aim of getting accurate metrological information.

What we use it for: Topography and the recording of buildings: We have used the FARO Focus3D X 330 in conjunction with ScanLAB Projects, London to record the façade of San Petronio in Bologna, The Last Supper by Leonardo da Vinci and the whole of the refectory at Santa Maria Delle Grazie, Milan. It would have been ideal to record the walls of the Citadel in Aleppo, Syria before they were seriously damaged by a tunnel bomb.

We don’t use it for: Recording the subtle detail of surfaces that is required to make an accurate facsimile or for epigraphic study.

Long-medium range scanners use time-of-flight or laser-pulse based systems where a laser light is bounced off the target at a distance. A laser range finder calculates the distance to a surface by timing the round trip of a pulse of light using the known value for the speed of light. In cultural heritage documentation, long-medium range scanners are normally used in combination with close-range 3D scanners to generate models with both global metrological accuracy and high resolution surface detail.

The Close Range 3D Scanners (more than 8cm and less than 1m working distance) are used to record the shape and surface of objects in great detail. Close recording distance is usually associated with higher resolution.

What we use it for: Scanning the surface of paintings and reliefs like the Hereford Mappa Mundi and Goya’s Black Paintings. Recording shape and surface of sculptures and complex forms like the tomb of Tutankhamun, the hieroglyphs on Tutankhamun’s sarcophagus, the decay on the surface of the sculptures on the façade of San Petronio or in the crumbling Romanesque cloisters in Tudela. The output can be both for study using screen-based applications or to be re-materialised for a range of purposes including tactile objects for the blind and partially sighted, facsimile production and exhibition display.

What we don’t use it for: To record large structures for screen viewing. Close range scanning is slower than long-medium range scanning or photogrammetry. 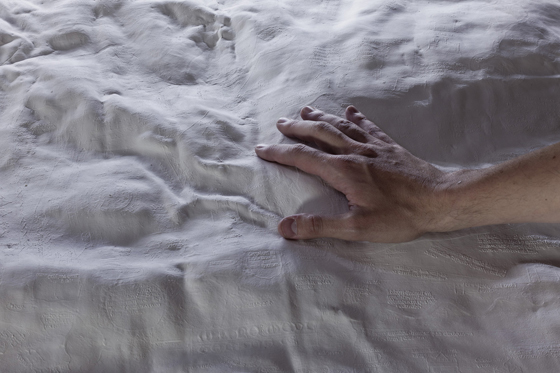 A re-materialisation of the Hereford Mappa Mundi, recorded with the Lucida 3D scanner 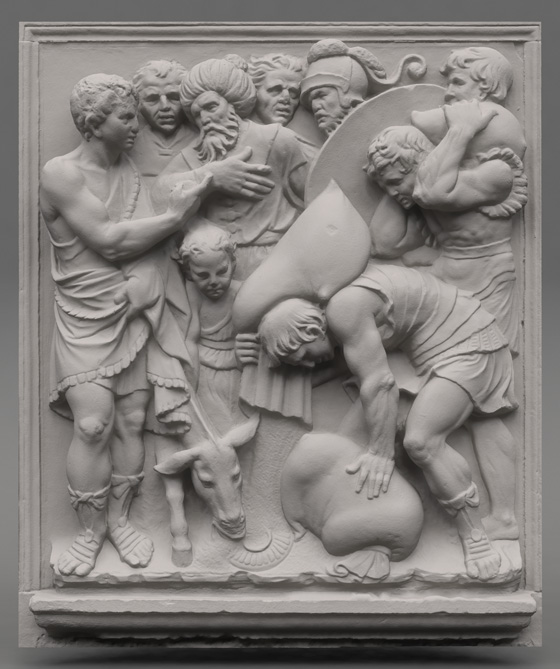 A render of a relief from the Basilica of San Petronio in Bologna, recorded with NUB3D SIDIO structured light scanner

Close-range scanners use either laser or a structured light system. Triangulation based 3D laser scanners use a laser light and one or two cameras to record a subject. Through trigonometry, the distance of the object to the scanner can be calculated thus creating a precise map of the surface. Structured light scanners also use triangulation but use projected patterns of light instead of a laser. The camera(s) records the projected patterns and calculates the distance of every point in the field of view. Close-range 3D scanning in its many variations is essential for recording ‘at risk’ heritage. To meaningfully document the past it is essential to be able to document not just the general shape but also the subtle details of the surface of the object. This is why Factum Arte has been using several different close-range 3D scanning systems.

Photogrammetry is the science of making measurements from photographs.

What we use it for: The quick recording of vulnerable and inaccessible sites. Photogrammetry is the ideal way to obtain 3D information in situations where it is not possible to use 3D scanners (inaccessible locations, conflict zones), or when high-speed recording is required (scanning people, living organisms, liquids in movement). It is ideal for the recording of translucent surfaces like alabaster and marble. Due to the composite nature of the image capture, colour and form can be extracted from the data. Factum Arte has applied this technology to record the Stelae at Nahr el Kalb in Lebanon and is currently perfecting both the technique and the software in order to record the Sarcophagus of Seti I in Sir John Soane’s Museum. We have recently completed the construction of a 9 camera system capable of recording objects up to about 50 x 50 x 50 cm in about 4 seconds.

What we don’t use it for: The highest resolution recording of surface for facsimile production and featureless, reflective and dark surfaces. It is possible that with software improvements photogrammetry will soon become the dominant method for recording at risk cultural heritage in 3D and colour. 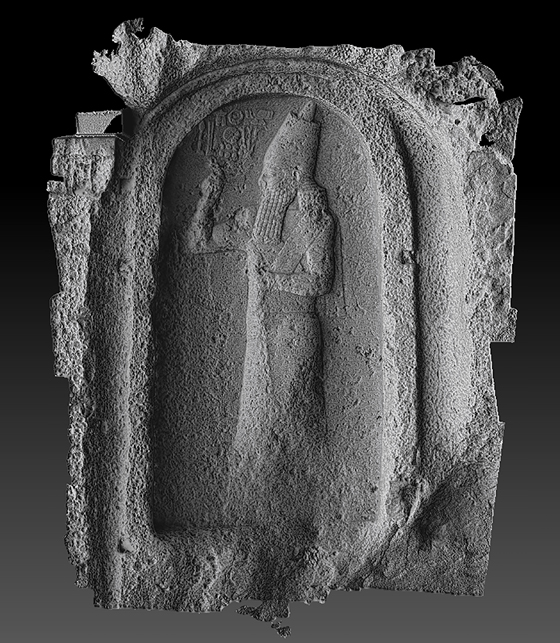 3D rendering of the Stelae to Esarhaddon 688 - 699 BC in Nahr El Kalb, Lebanon; recorded and processed with photogrammetry. 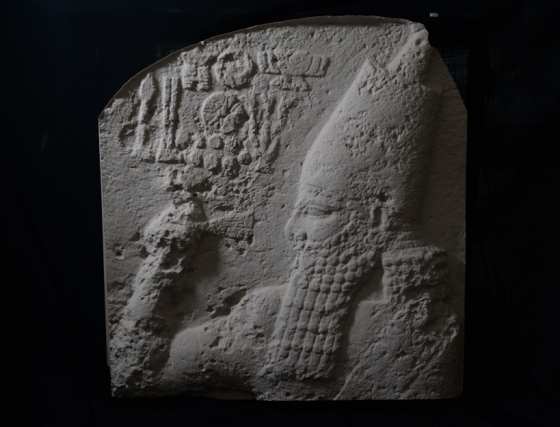 Detail of the Stelae after being routed in high-density polyurethane in Factum Arte.

Photogrammetry has been used since the birth of modern photography in fields such as topographical mapping, architecture and archeology. Factum Arte’s work and research is focused on close range photogrammetry as a means to record the form and texture of surfaces and objects. Recent developments are based on advances in computer vision technologies and SfM (Structure from Motion) software.
The data can be recorded with commercially available cameras that capture multiple shots of the entire surface of an object. Close-range photography can result in high-resolution data. Basic processing is required in the field to ensure that no areas have been missed. Post processing is time consuming. Factum Arte’s agenda at present is to record as many sites as possible at the highest practical resolution.

A note about resolution

There is a great deal of misunderstanding about accuracy and resolution. The way we are using the term resolution refers to the level of detail a 3D file holds. We evaluate the resolution not just by a theoretical or mathematical description of the sensor of the scanner but by the correspondence between the scanned data and the original surface. Close range scanners have greater correspondence to the surface of the object than long-range scanners.
The main variables that affect the resolution are the lenses, the sensors, the area that is being scanned and the software algorithms that process the data. Somewhere in this mix of elements is the sweet-spot that will result in data that passes the 'mimesis test' - If it looks like a sweet that has been sucked it has failed - if in direct comparison with the original it looks the same it has succeeded. 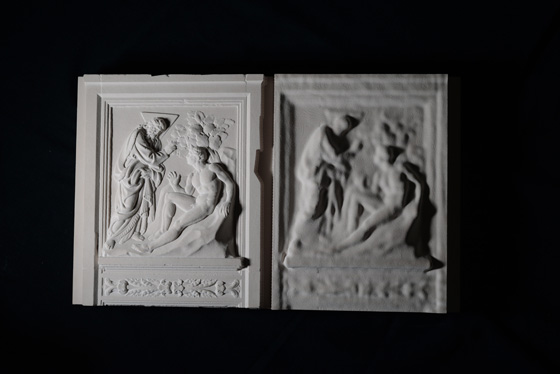 A routed sample from the façade of the Basilica of San Petronio in Bologna illustrating the difference in resolution and accuracy between close-range and long-medium range scanning – in this case the NUB3D SIDIO (Left_Captured at close range) and the Faro Focus3D X330 (Right_Captured at a distance). Scanners Used in Factum ArteFARO Focus3D X 330 The FARO Focus3DX 330 laser scanner (a LiDAR scanner) records a 360° enviro

The FARO Focus3DX 330 laser scanner (a LiDAR scanner) records a 360° environment of wherever it is placed. In Factum Arte we use the FARO, in conjunction with ScanLAB Project, as a complimentary tool to create an accurate digital canvas on to which we can place higher resolution surface scans. 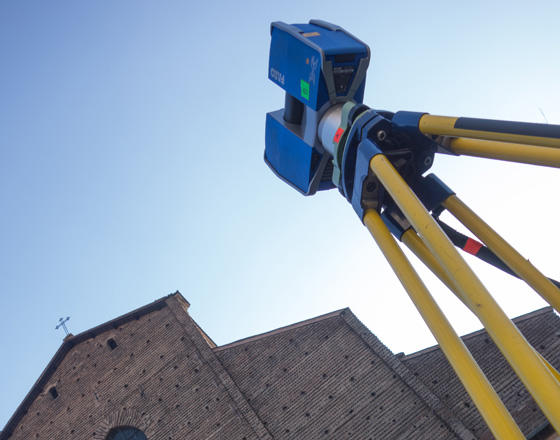 The FARO Focus3DX 330 scanning system: used at an average resolution of 0.6mm scanning in 360° from 14 different positions when scanning the Basilica of San Petronio, Bologna 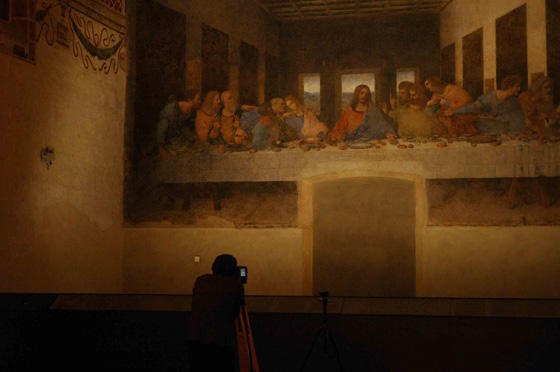 Lucida is a 3D laser scanner designed and developed by the artist Manuel Franquelo and custom built by Factum Arte. It obtains high resolution recordings of the surfaces of works of art and low relief objects. This system has been developed to obtain 3D information of surface and texture, not colour. 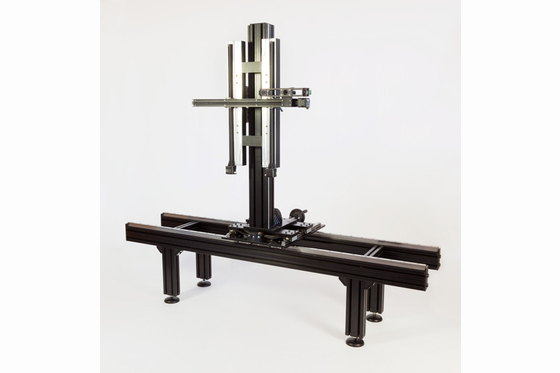 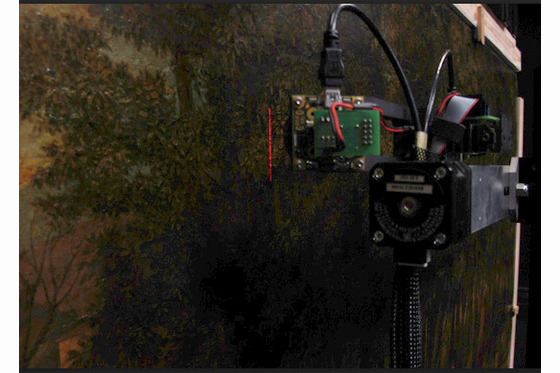 Kreon Zephyr 50 3D scanner is a handheld scanner secured to a robotic arm that can be used to scan a variety of structures and objects. The early handheld scanning systems (like this Kreon) required a 6 or 7 axis arm but due to the amount of research and development resulting from the games industry systems are now available that are completely hand-held. 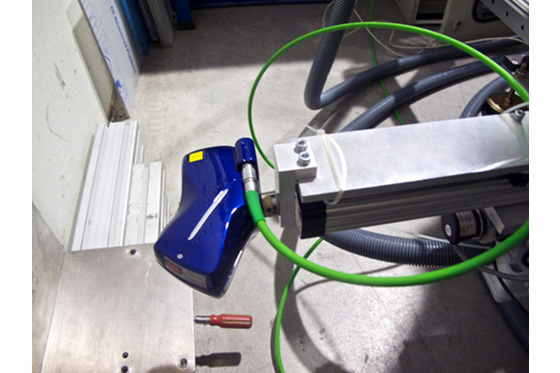 The Kreon Zephyr 50 3D scanner head mounted on a robot 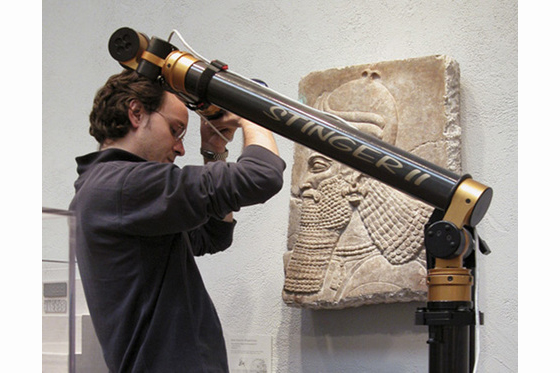 Factum Arte has worked with Nub3D, a company based in Barcelona who developed the SIDIO scanner, since 2006. The SIDIO is one of our most useful systems as it captures the full geometry of objects with high surface detail and outputs the data in clean point cloud formats. 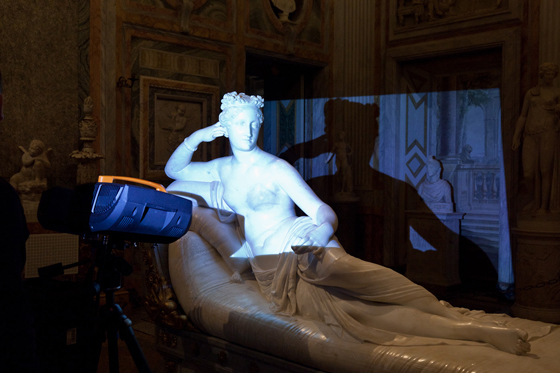 The Breuckmann scanner outputs high resolution 3D meshes and is used in Factum Arte for a variety of artistic and conservation projects. The Breuckmann, and similar systems, are used widely because of their accurate yet simple recording and processing methods. 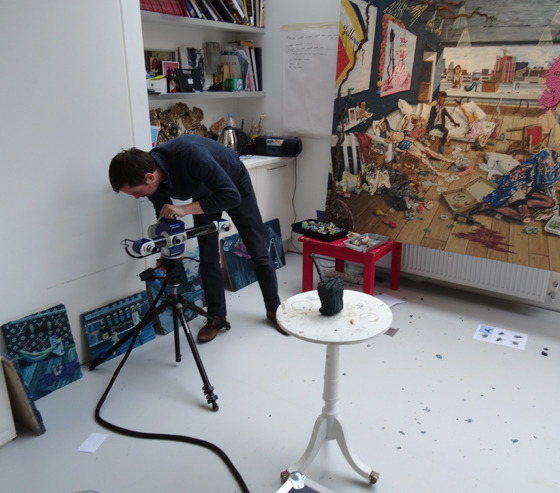 Photogrammetry is a way of extracting 3D information from 2D images using feature mapping software and a range of algorithms. In order to make a 3D model a camera takes multiple images with overlap of the surface of the object. The images can then be processed to create a 3D model for various applications. 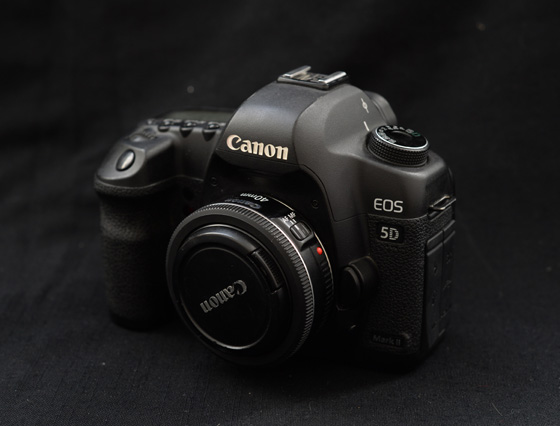