In the 1908 Arthur Worthington published A Study of Splashes famously capturing milk drops and popping soap bubbles. More than a hundred years later modern technology enables us to replicate his results with an added dimension. Factum Arte has recently began using photogrammetry to record moving liquids in three dimensions.

To capture moving liquids in three dimensions Factum has overcome two main obstacles: simultaneously photographing the liquid from different angles, and revealing a textured pattern along the liquid’s surface. A single instance of the liquid’s changing shape is captured with a multi-camera rig. Their exposure time is effectively shrunk to that of the high-speed flashes that freeze the motion of the moving liquid.
Revealing a texture along the liquid’s surface is more challenging. Photogrammetry software needs a textured pattern to recognize single points along the liquid´s surface. By triangulating thousands of these points the software creates a three dimensional mesh of the surface. However, most liquids do not display any texture impeding a straight forward photogrammetry scan. To solve this texture problem Factum Arte has experimented with two solutions: projecting patterns and using non-homogeneous liquids. Light projections are limited by their low point density and intensity. Obtaining non-homogenous liquids has been more successful.
Non-homogeneous liquids are composed of two elements: a body and a pattern. The body has to be opaque, have low viscosity and make no bubbles. The pattern has to form a high density array of dots evenly spread along the body´s whole surface.

The following discussion considers several liquids under the characteristics listed above.

Chocolate milk: opaque liquid that behaves like water but gives off too many bubbles. On a large scale these can be used as a texture. However, bubbles appeared popped and are not evenly spread along the liquid’s surface. 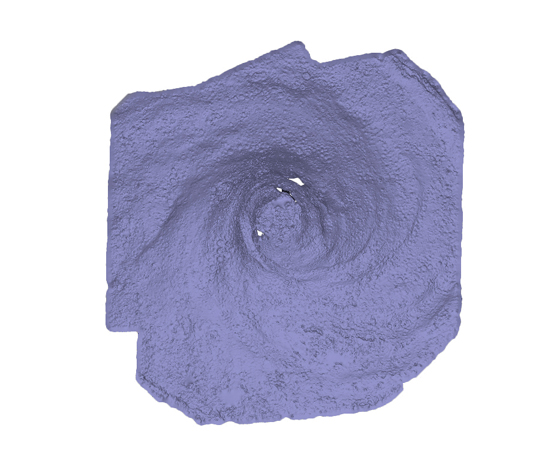 Water with paint: better alternative than Colacao since it only makes very small bubbles. These create a thin foam layer that can be used as control points. However, the foam disappears when not stirred, making it impossible to record slow moving liquids. 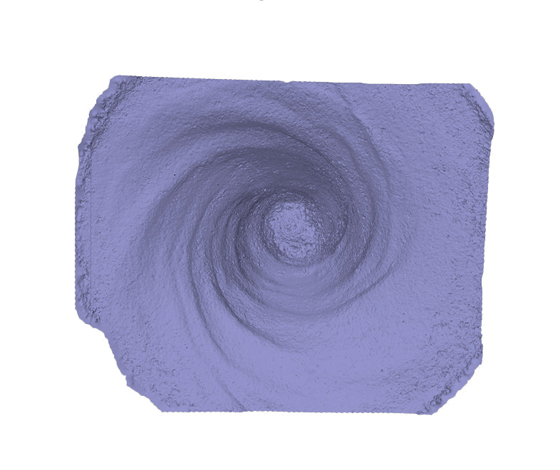 Water with paint and cork: although they give many reference points to triangulate, the cork tends to concentrate along certain parts of the liquid’s surface. Consequently, those parts with low density of cork result in noisy meshes. 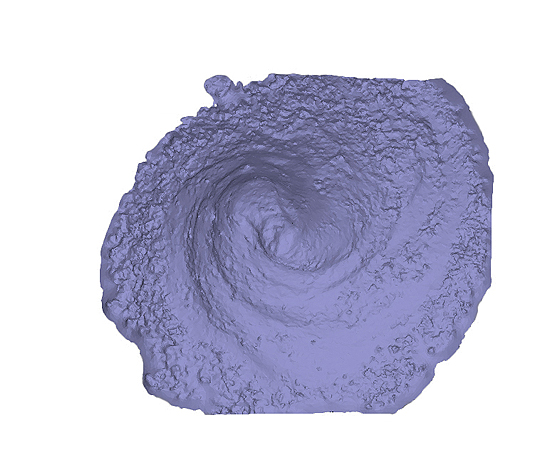 Water with paint and cork

Gypsum: watered-down gypsum yields high point density thanks to its graininess. In addition, its texture is spread homogeneously along the surface. However, gypsum is too viscous and therefore does not create the desired turbulence. 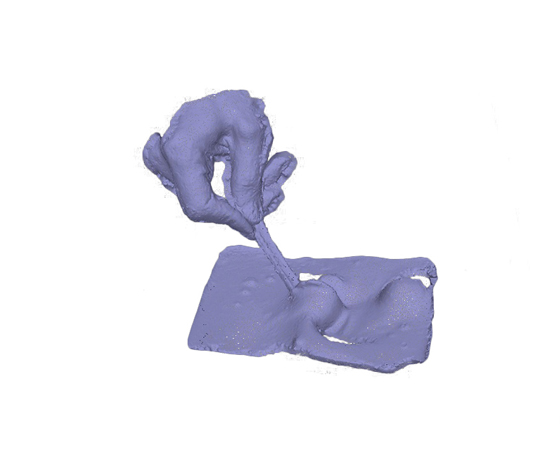 Oil composite: this mixture of tinted oil and alcohol gives the best results. Due to their density difference, the alcohol and the oil do not mix when stirred. Instead, the discrete alcohol drops form a texture. The oil and the alcohol are tinted to increase their contrast. The oil composite produces by far the best results. It is made out of tinted oil and alcohol. The proportion of oil to alcohol can vary according to the desired point density. 2:1 ratio of oil to alcohol yields good results. Both the oil and the alcohol have to be tinted to make them opaque and to increase their contrast. 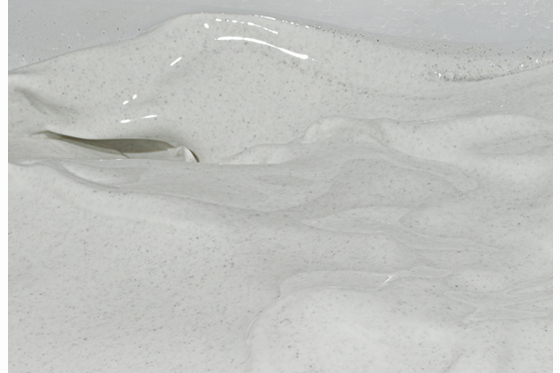 1 Get thin oil like sunflower oil.
2 Mix the oil paint with a solvent, like turpentine oil, to lower its viscosity. Avoid over-diluting the tint since it has to stay opaque. Choose a light tint.
3 Mix the oil with the tint. Add enough tint to turn the oil opaque.

4 Get half as much alcohol as oil.
5 Mix the alcohol with acrylic paint. Add enough tint to turn the alcohol opaque. Choose a dark tint.

6 Mix the body and the pattern. The two will not fully mix. Instead, the alcohol drops will remain visible displaying the desired pattern on the liquid’s surface.

Areas of high point density correspond to those with low mesh noise: 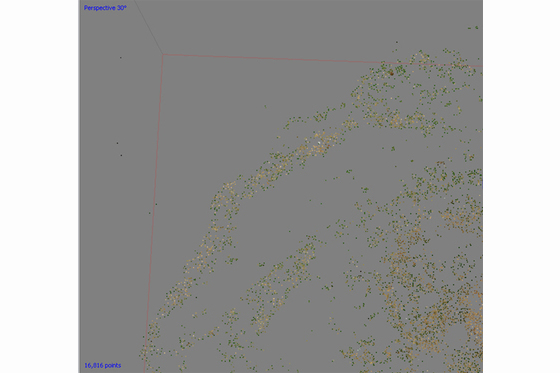 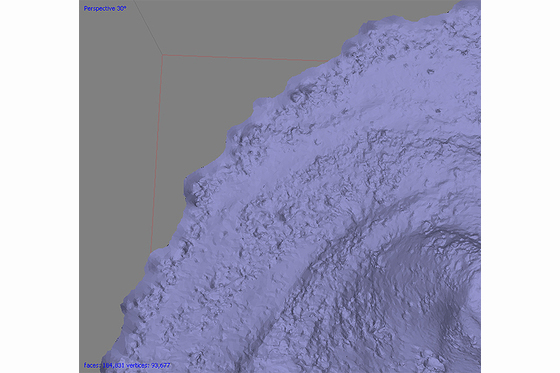 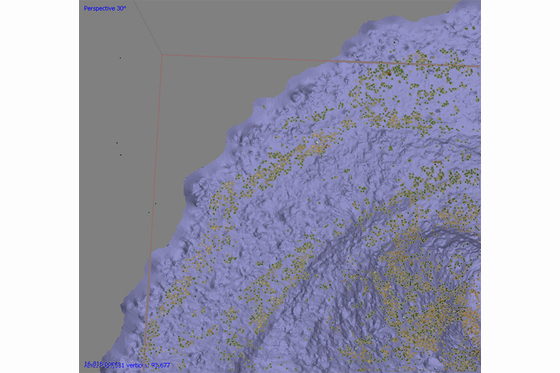 The sides of bubbles give control points, but their domes do not come out: 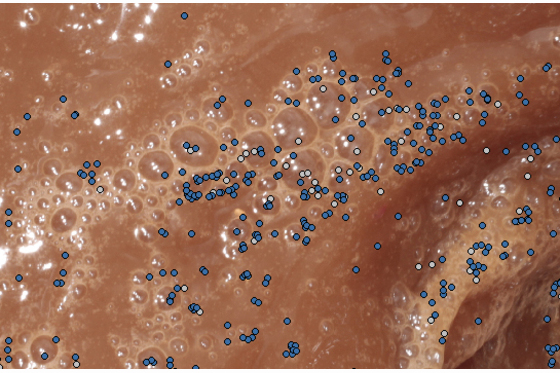 Some liquids, like water with mixed with paint, create a thin foam layer that acts like a texture. However, the foam disappears as soon as the liquid is not heavily stirred: 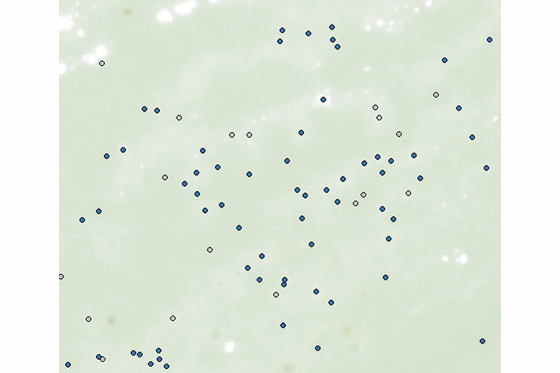 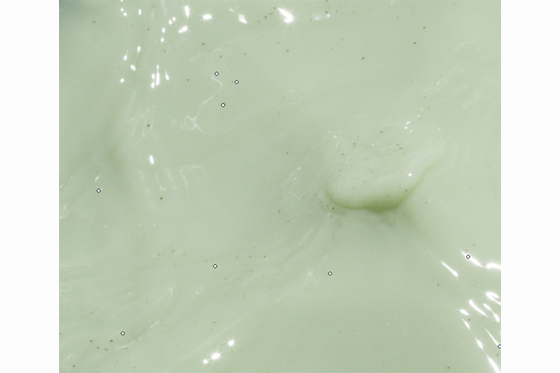 Floating particles like cork increase the density of points: 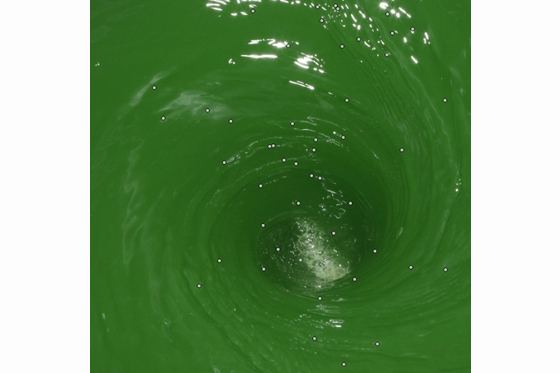 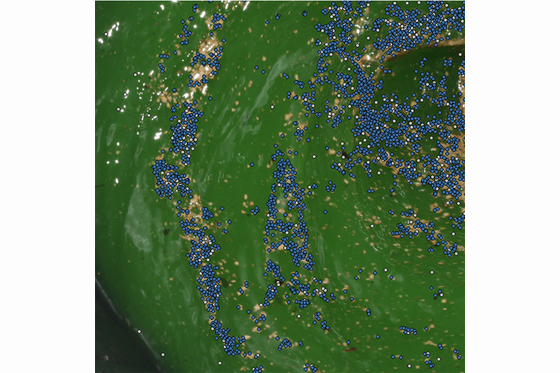 REFLECTIONS
Photogrammetry software ignore most reflections and highlights. These can be reduced with polarizing filters but their utility would be limited; since there are multiple light sources the reflections come from different directions. Softening the light with reflectors is a better alternative as long as the flashes are powerful enough to compensate for the intensity loss.

SPEED & SYNC
The effective exposure time of the photographs is set by the flash duration. The settings in the camera can set to a relatively long exposure time (between 1/5” and 1”), and the image is frozen by the flash.
The flash duration varies according to the type of flash and the settings. Studio flashes are too slow (tests here). Instead, speed-lights are better at freezing free-falling water drops at power settings of 1/16, ideally 1/32 (tests here). Air-gap flashes and other high-end quick flashes are better suited to freeze faster moving objects such as bullets in flight (tests here).

The best results are given by non-homogeneous liquids that are opaque, have low viscosity, make no bubbles, and whose pattern forms a high density array of dots that are evenly spread. An oily composite made out of tinted oil and alcohol has given the best results. Recording larger objects with larger features diminishes the importance of the material. Smoothing of the mesh with post-processing programs can compensate for low point density.
It is vital to synchronize high-speed flashes to freeze the motion of the liquid. Since the images have to be taken simultaneously, the number of captures will depend on the number of cameras that are used.