One of the most useful systems for Factum Arte is the White light scanning system. It was built by Nub3D, a company located in Barcelona with whom we have developed a close relationship. SIDIO is the scanning system we have been working with, employing the conjunction of optical technology, 3D topometry and digital image processing to extract 3D coordinates from an object surface. This technique is known as Structured white light triangulation and light is the only element used throughout the measuring process.

Three-dimensional information is accquired by analyzing the deformation caused when parallel lines are projected onto the surface of an object. A series of images are captured by a camera that is integrated in the measuring head. This process is performed within seconds. With these images, SIDIO integrated technology calculates a co-ordinated XYZ point cloud relating to the surface of the object.

The SIDIO sensor allows capturing full geometry of parts and pieces. Dense point clouds of millions of points or polygon meshes are generated describing the surface of the scanned object with precision. 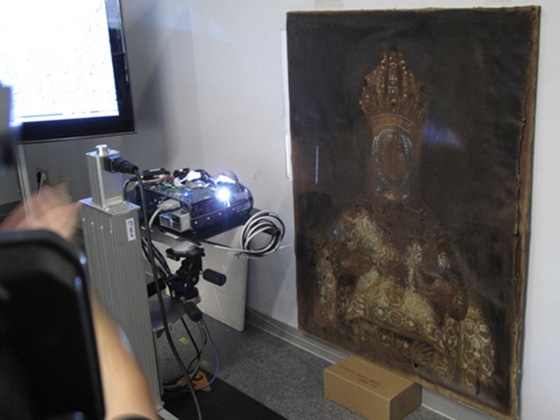 The prototype developed in collaboration between Nub3D and Factum Arte running tests over a particularly damaged anonymous painting.

The way it works is simple: the Sensor is freely positioned in front of the piece, and moves to cover all needed areas of the surface. These views are registered to the same coordinates system using any of the offered registration methods (best-fit, targets, photogrammetry or MML®).

The main difference with Laser scanning is a slower speed, as it captures surface areas but needs processing time to properly align the different views.

Factum Arte have been working with Nub3D since 2006 and have used previous models of their scanning systems. During 2010 we developed a specially designed prototype based on their technology which allowed to record paintings. This prototype took advantage of the possibility of recording areas and colour, and thanks to the tool that we designed it could export the 3D data as a tonal range image. This bit of software is called DALI software and it helps us generate data that doesn't need post-processing in order to output. It can be sent straight to the routing software, without triangulation. This means being able to send more data above the limitations of routing software. 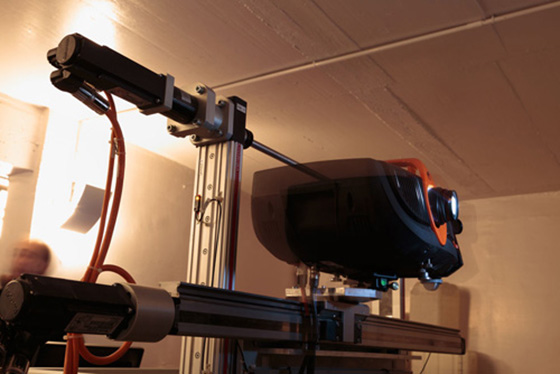 The main modification in this prototype was attaching the latest sensor from Nub3D onto a moving XYZ axis frame. The frame consists of 3 accurate linear guides controlled by a CNC machine that sends the moving coordinates in all axis and records the position of the scanning area. This way, post-processing becomes unnecessary as each shot is automatically placed on its exact coordinates. The frame was built by IPREM, another Spanish company specialised in machinery developments.

One of its strengths was the large depth of field, the speed and the automatic process. The prototype was a partial success. The system itself is a working tool that allows scanning semi-flat surfaces quickly and accurately, but due to the limitation of a single camera and some issues about the white light the system is not ideal for recording varnished, glossy surfaces (reflections are impossible to correct once attached to the moving frame). In a standard use of the system these reflections can be easily avoided by modifying the angle of the camera with the plane of the object that is being recorded, but not with an automatic process as described. 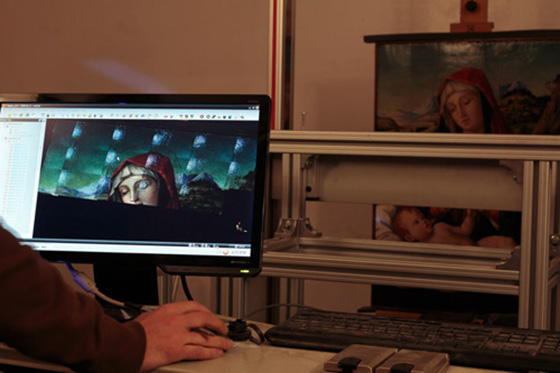 Testing the SIDIO scanner over a renaissance painting using the DALI module. Certain issues were detected on the scanning due to this paintings varnish.

Go to The Church of San Petronio project 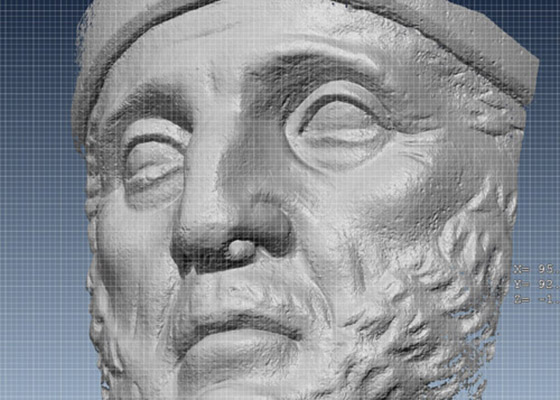 A detaill of the quality achieved with the new SIDIO that can scan at 75 microns. This scanner is ideal for 3D objects with all-around surfaces. 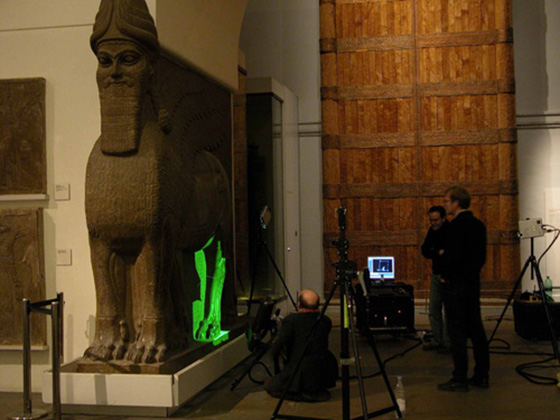 Scanning in the British Museum with SIDIO head at a resolution of 700 microns (0,7 mm)