Photogrammetry is a 3D recording technique that employs 2D images to create a 3D model of an object or surface. It involves taking hundreds of overlapping photographs of an object from many different angles and processing them using specialised software such as RealityCapture (RC) or Agisoft PhotoScan. The digital 3D model can be used for study or outputted as a physical object via 3D printing or CNC milling.

Photogrammetry is a fundamentally democratic technology: it can be done by anyone with a phone camera and access to free photogrammetry software. However, in order to produce the kind of high-resolution 3D models that accurately capture the geometry and surface detail of an object, a high level of skill is required for both data recording and data processing. In general, the better the camera sensor and resolution capacity of the lens, the better the data will be. The skill of the operator, the quality and number of images captured and the distance of the camera sensor to the surface of the object also play a large role in determining the resolution and detail of the 3D data. Under ideal conditions, photogrammetry can record 3D data of a surface to an resolution of 100 microns, on par with other close-range 3D recording systems available today. 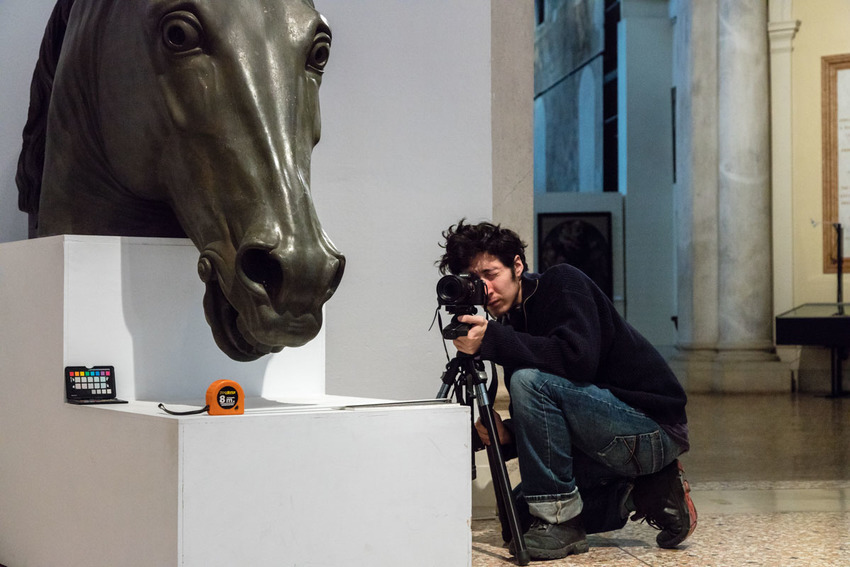 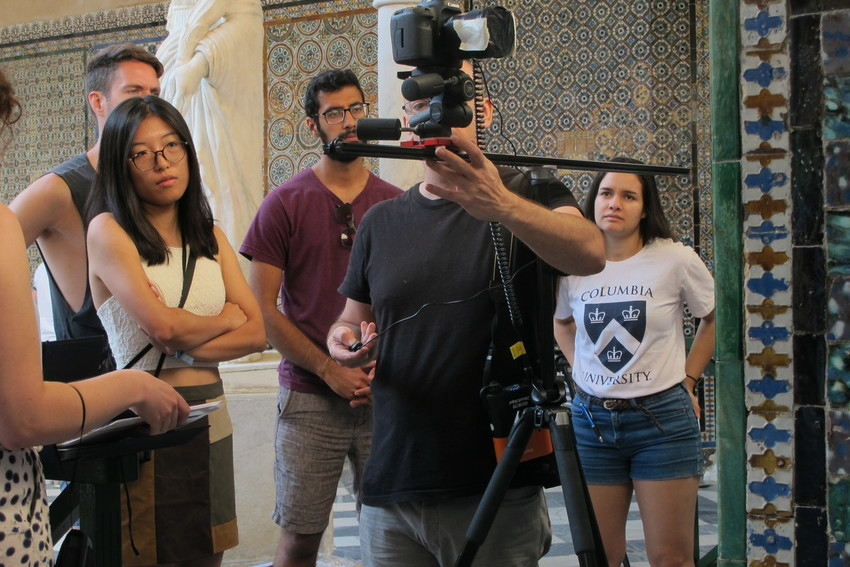 Pedro Miró during an on-site training lesson on close-range photogrammetry at Casa Pilatos, with students from Columbia University © Óscar Parasiego for Factum Foundation

Factum Foundation currently employs photogrammetry – sometimes combined with white-light or LiDAR data – to produce geometrically precise, but also highly detailed, 3D models of artworks. The technique has a number of advantages over traditional 3D scanning technologies, including the possibility of recording colour information at the same time as 3D data. Photogrammetry is also inherently ‘portable’ – in most cases the equipment (camera, tripod, flashes) can fit into a small camera bag, making it a particularly useful tool for recording at remote or dangerous sites.

Long-range or ‘aerial’ photogrammetry was developed in the 19th and 20th centuries as a cartographic tool to produce three-dimensional maps of the surface of the earth. In the 21st century, advancements in computer processing power have resulted in the rapid growth of close-range photogrammetry, which can be used to capture both the shape and fine surface detail of 2.5D and 3D objects. The technique continues to evolve: for example, long- and close-range photogrammetric recording is now being coupled with drone technology to facilitate the documentation of large cultural heritage sites – operators are able to photograph at heights and angles otherwise impossible to reach without scaffolding. 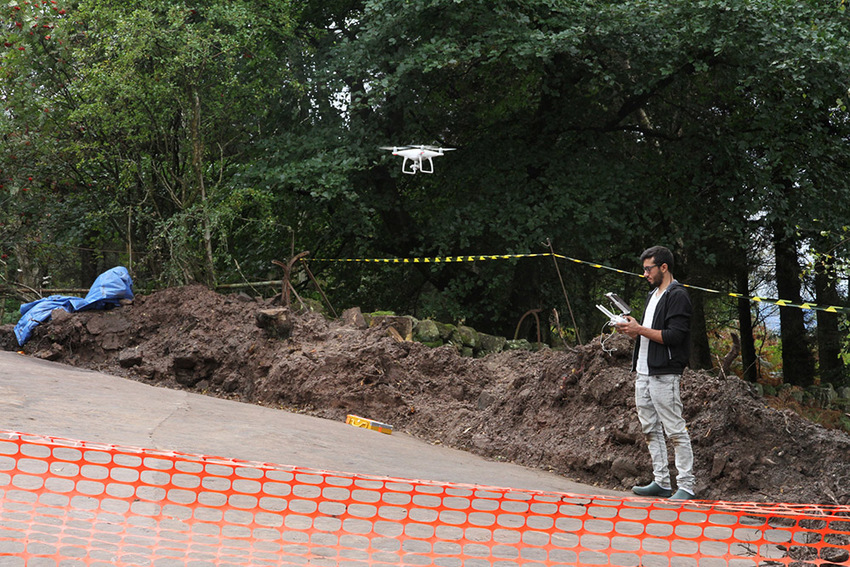 Photogrammetry software works by identifying common features on an object's surface across multiple images. Each of these ‘features’ can be described in 3D space by a series of coordinates (x, y, z). A grouping of such points is called a ‘point cloud’. During post-processing, the points are also triangulated (connected to one another by lines) and conjoined with flat planes to produce a 3D model – a 'geometric mesh’ composed of vertices, edges and flat planes. By applying digital colour management methods during a recording session, it also becomes possible to simultaneously obtain both 3D and accurate colour information about the surface of an object.

The images below show the process of producing a 3D model using the software RealityCapture: 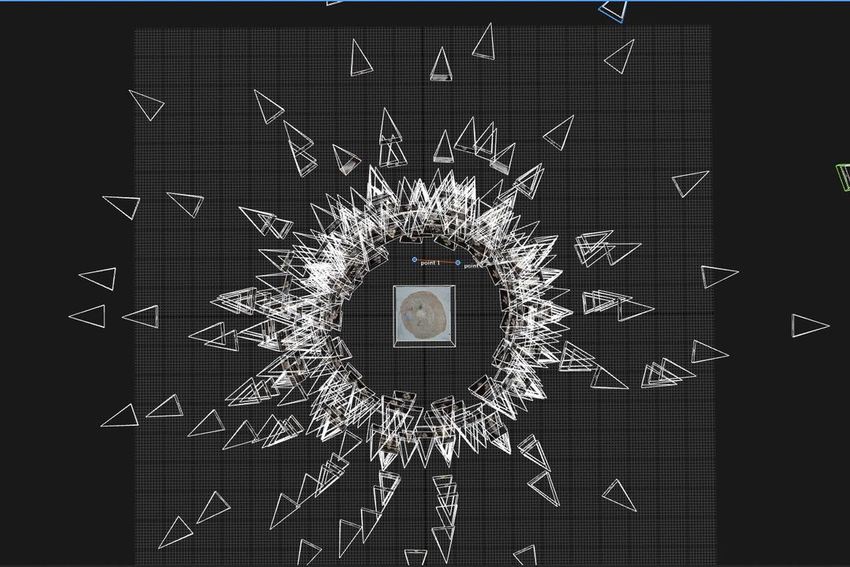 An object is photographed from multiple angles. The software detects the camera positions and plots them in 3D space as seen in the image above, where each triangle represents a camera position. Screengrab from within RealityCapture © Factum Foundation 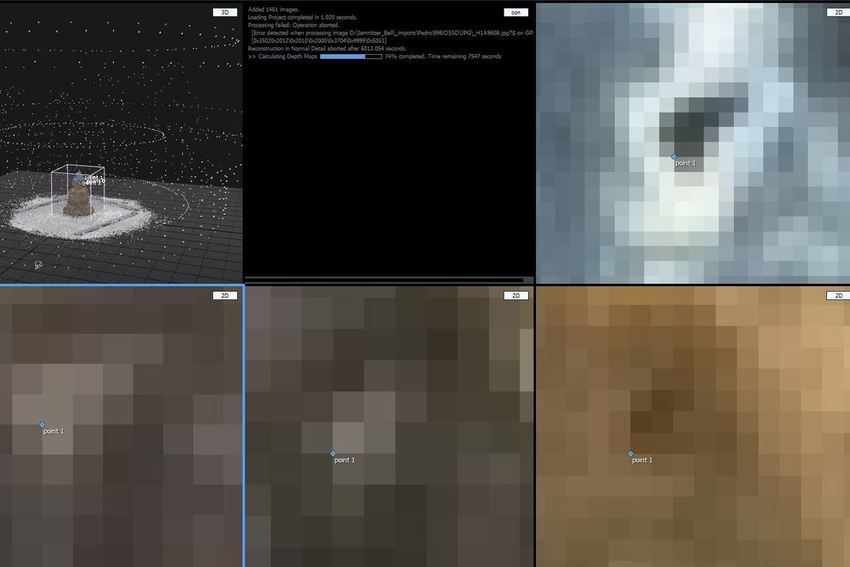 The screengrab above shows 'control points' that had to be chosen manually by the user inside RealityCapture in order to produce the 3D model of the "Cellini Bell" - the user located 'common points' in different images. Photogrammetry software does this automatically for millions of other points found across images of an object. Image © Factum Foundation. 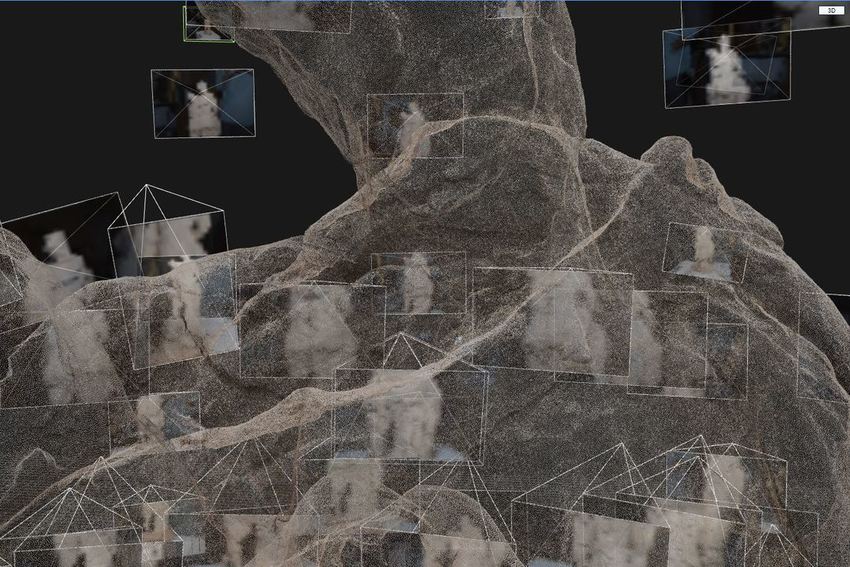 The point cloud up-close. Each individual point in the image above represents a common pixel found in more than one image. Screengrab from within RealityCapture © Factum Foundation 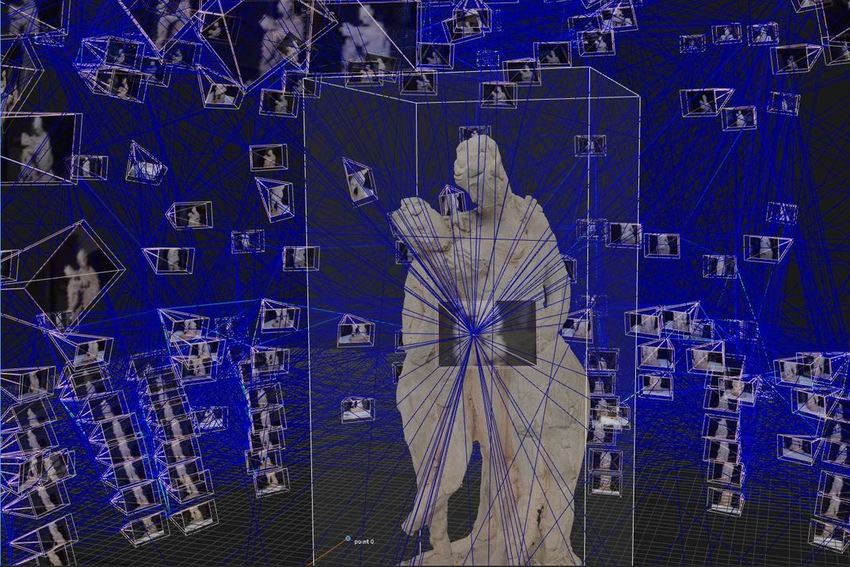 The blue lines represent how images are interconnected to create the point cloud. The software recognises common points in different images and plots them in 3D space. Screengrab from within RealityCapture © Factum Foundation 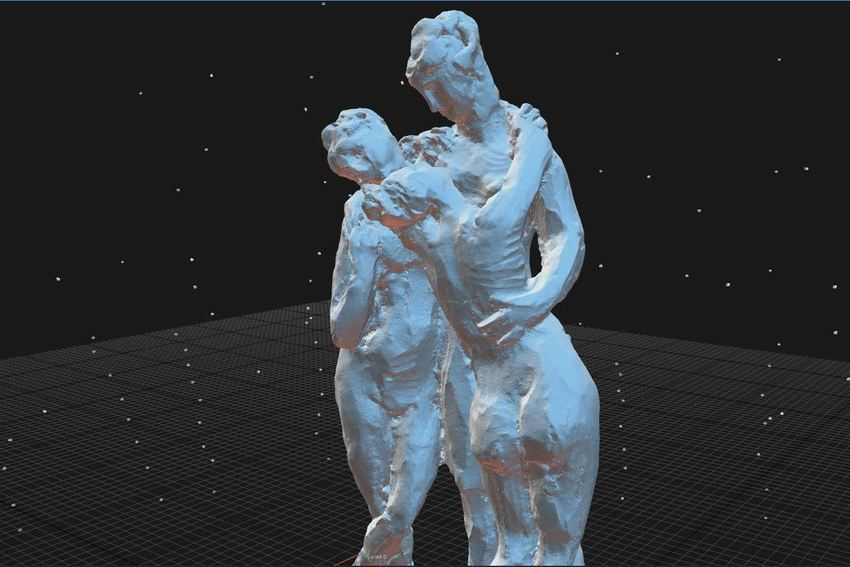 The mesh is produced through triangulation of the point cloud. Screengrab from within RealityCapture © Factum Foundation 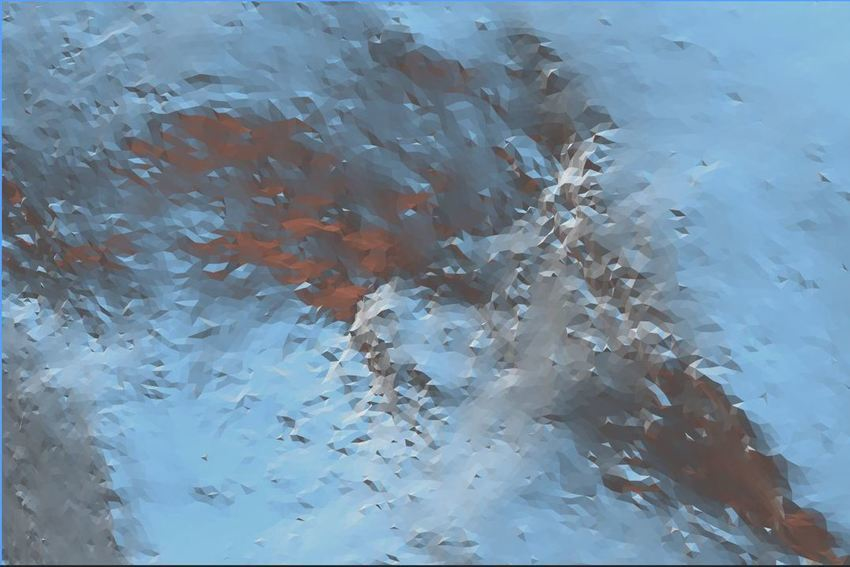 Close-up of 3D mesh. The triangles represent the flat planes that conjoin the vertices. Screengrab from within RealityCapture © Factum Foundation

Designing and imparting training courses in cultural heritage digitisation with local partners is a large part of Factum Foundation’s work. The Foundation has demonstrated the potential of photogrammetry as an adaptable, relatively simple technology with which trainees can produce excellent results even after brief training periods. Photogrammetry also represents a useful transferable skill that people can later use for different applications that do not necessarily need to include cultural heritage digitisation.

We have carried out training programmes in photogrammetry in Dagestan (Russia) and Saudi Arabia, amongst others. 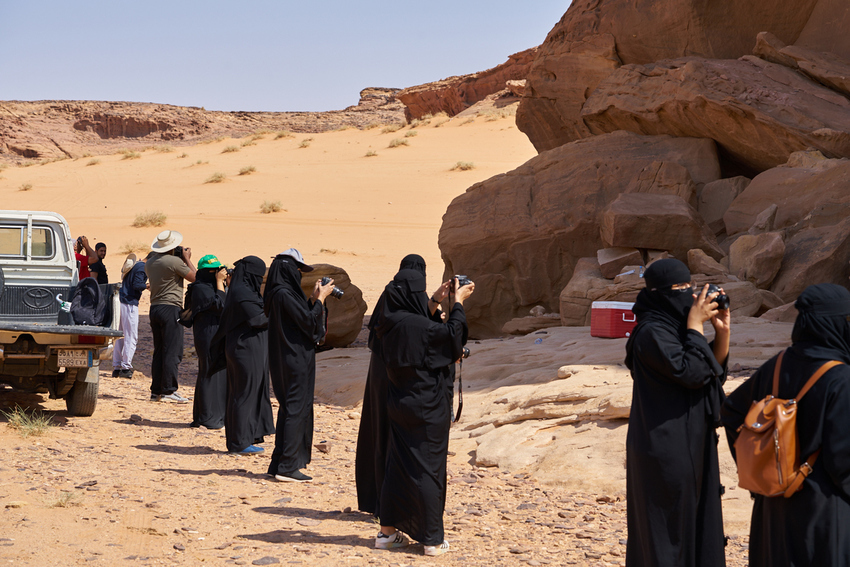 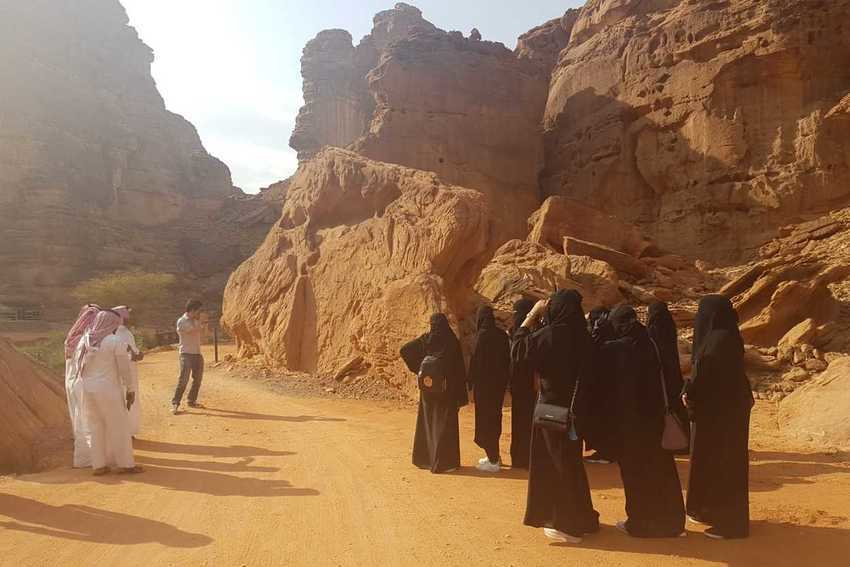 After a short photogrammetry training programme in Madrid, two young Dagestani photographers accompanied a Factum team to the Mosque of Kala Koreysh where they recorded tombstones with photogrammetry. Image © Ksenia Sidorova.

The Sepulchre of Cardinal Tavera at the Hospital Tavera in Toledo (Spain) was made in 1552 by Alonso Berruguete, one of the greatest sculptors of the Spanish Renaissance. As shown in the images below, it was badly damaged during the Spanish Civil War. The Sepulchre was recorded in 3D using a mixture of photogrammetry and LiDAR for a restoration project in conjunction with the Casa Ducal de Medinaceli. Marble has traditionally been viewed as a highly complex material for 3D recording and for photogrammetry in particular. However, with the right imaging equipment and processing experience, it is possible to obtain highly detailed, precise 3D models. The 3D model of the Sepulchre will be used to produce a digital restoration of the four Fates, whose faces suffered the most from the vandalism in the war. 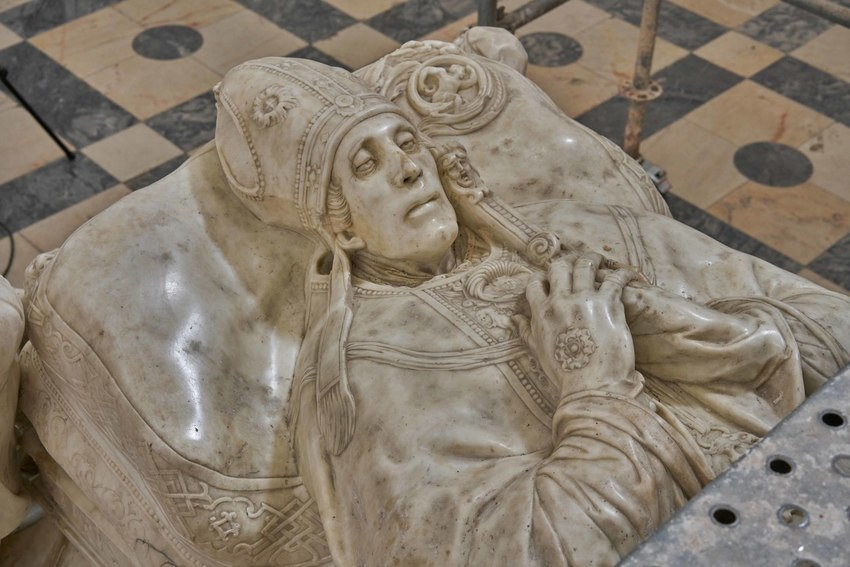 Cardinal Tavera's Sepulchre in Toledo. Marble has often been seen as an 'impossible' material for photogrammetry - we're showing that it is possible to get high-resolution data of marble objects. Image © Factum Foundation. 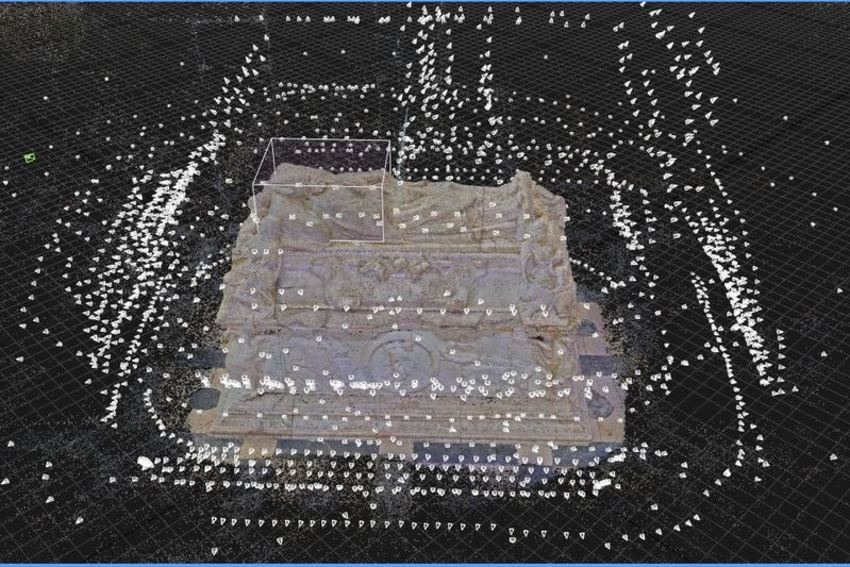 The Sepulchre's point cloud - note the camera positions around the object. These show how many images the photographer had to take. Screengrab from within RealityCapture © Factum Foundation. Textured 3D model of Cardinal Tavera's Sepulchre - the quality of the digitisation can be seen in the details. Image © Factum Foundation. One of the four Fates that sit on the corners of Cardinal Tavera's Sepulchre. These were damaged during the Spanish Civil War and the idea is to use this model to digitally restore them. Image © Factum Foundation.

The Jamnitzer or "Cellini" Bell is a tiny silver bell thronging with insects, lizards and all manner of plants cast in fine relief. Although once believed to have been the work of the Italian sculptor Benvenuto Cellini, the bell is now firmly attributed to the German goldsmith Wenzel Jamnitzer. Factum Foundation were commissioned to produce a facsimile of the bell for Horace Walpole's recently restored Strawberry Hill House. Recording small objects in 3D at high-resolution is fiendishly difficult. Photogrammetry makes this possible, but the process requires a huge amount of patience and precision. Recording the bell with photogrammetry was further complicated by its shiny surface and it had to be recorded twice: the first time using cross-polarising filters to reduce shine in the photographs, the second without to obtain true-to-life colour. A further difficulty was caused by the fact that, during the recording break, the object had to be moved back to its case - moving an object during a photogrammetry recording 'confuses' the software, which cannot use the object's surroundings to identify common points. In order to solve these issues, control points had to be added manually during post-processing. However, the results of the recording show the potential of using photogrammetry to record cultural heritage at high-resolution.

The digital model was later printed and gilded to produce the facsimile. 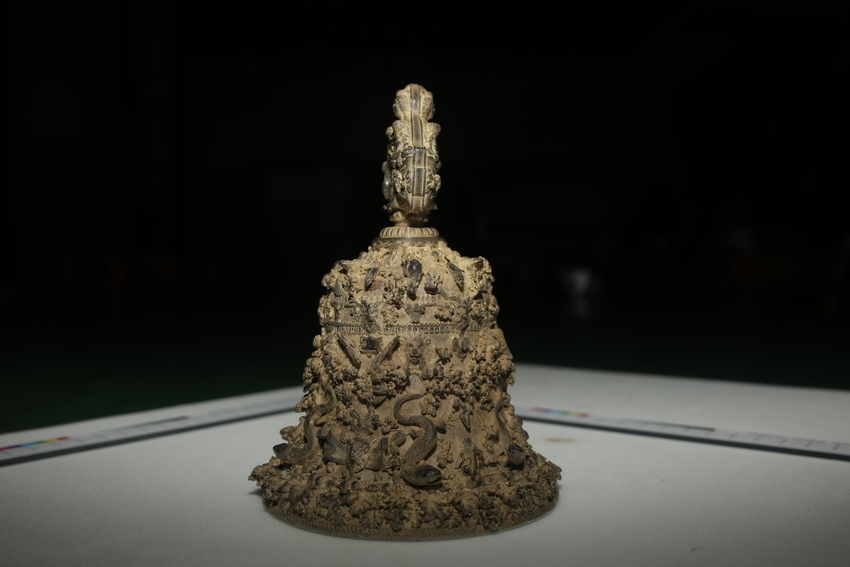 The "Cellini" Bell. A tiny bell cast in silver with intricate surface decorations of animals and plants. Image © Factum Foundation. The Cellini Bell in RealityCapture. Because the recording was interrupted and the object moved, the processing was more complicated than usual. Control points had to be set in order to 'join' the two models produced. Screengrab from within RealityCapture © Factum Foundation Point cloud of the Cellini Bell showing camera positions. Hundreds of images of the tiny object were taken over a full 8 hour working day. Screengrab from within RealityCapture © Factum Foundation. 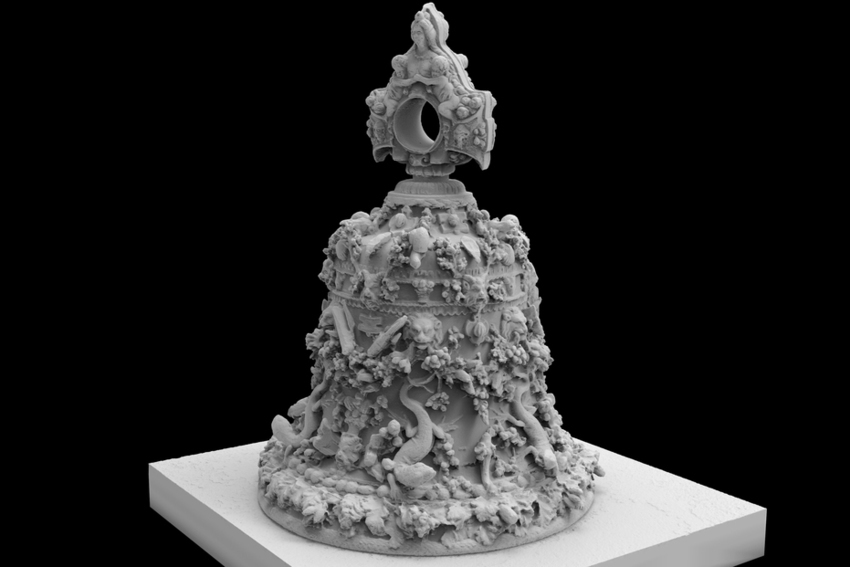 Detail from 3D model of the Cellini Bell. One of the main advantages of photogrammetry is the possibility of obtaining high-resolution 3D data for small objects. Image © Factum Foundation.