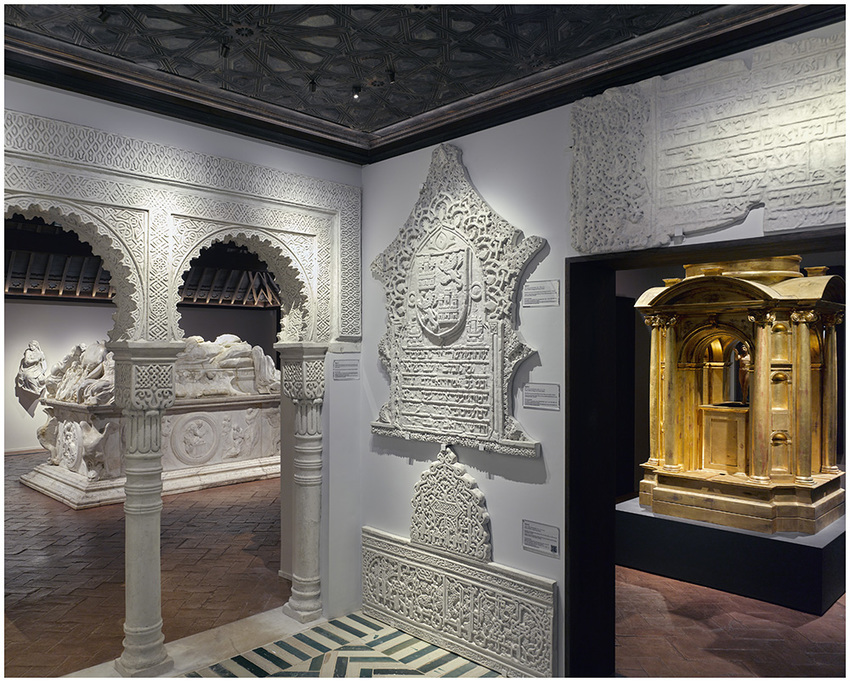 Yesería (ancient Greek γύψος, Latin gypsum and yeso in Spanish) is a term that describes carved or moulded plasterwork used for decorative purposes. Yeserías embody a specific aesthetic that arose during the cohabitation of Muslim, Jewish and Christian communities in Spain. The fusion of various cultural identities into a decorative art form is a critical feature of Spanish creativity that evolved to reflect political and religious change.

Yeserías are made using two basic techniques: in-situ carving or casting. The hand carving technique involves tracing a design onto an applied stucco layer and cutting-out with iron tools. This is known as the ‘naqch hadida’ technique. It was typical during the first period of Nasrid artistry (1232-1314). Casting, on the other hand, allows for more elaborate designs that can be replicated. It was introduced under the rule of Muhammad III (1302-1314), using wooden or plaster moulds. It was common to cast the shapes in clay that was then coated with a gesso mix.

Yeserías began to appear in Spain following the conquest of the Iberian Peninsula by the Umayyad dynasty in the 8th century CE. Evidence of carved plasterwork can be found much earlier in the Mediterranean region (e.g. in Egypt, Greece and Italy, etc.), but only during the Sassanid empire (3rd century CE) did the ornate features of the Arabic plasterwork develop to form geometric, floral, and symmetrical plant shapes.

With the continued presence of Moorish power on the Iberian Peninsula, the ornate plaster carvings were adopted by both Jewish and Christian communities. The most notable examples of yesería works arose during the Nasrid dynasty (1232-1492) when the demand was high and the technical skills of the craftsmen were at their peak. The Mudéjar yesería that cover the Palace of Pedro I in the Alcazar reveal complex interconnections that existed at all levels of society at the time. The word ‘Mudéjar’ literally means 'subjugated', a term coined in the nineteenth century by José Amadot de los Rios y Serrano to refer to the Muslims who remained in Al-Andalus after the Reconquista.

The yeserías displayed in the Spanish Gallery are from three sites in Toledo, recorded between 2020 and 2021 by Factum Foundation:
- the Convento de Santa Clara (carved in an Islamic scholar's house during the Moorish control);
- the Sinagoga del Tránsito (carved before the expulsion of the Jewish community);
- the Salón in Casa de Mesa.
The remaining yeserías are from the Palace of Pedro I in the Alcázar in Seville.

They were all recorded using photogrammetry, before being CNC-milled in high-density polyurethane, moulded and cast in plaster.

The building known as ‘Casa de Mesa’ is located in the historic centre of Toledo, at the highest part of the city near the Church of San Román (currently Museo de los Concilios y la Cultura Visigoda). The main treasure of Casa de Mesa is its 14th century Mudéjar hall which contains a unique arched entrance decorated with yeserías that are still in good condition. Owned by noble families since its origin, the house has hosted historic figures including Saint Teresa of Ávila who was a guest between 1562 and 1569. The Salón (hall) is all that remains of a sumptuous Mudéjar palace built a few years after 1357 (the same year that the Sinagoga of el Tránsito was built). The decoration is characteristic of Toledo’s Mudéjar style, consisting of a background of double palm leaves from which naturalistic, Gothic flora of oak and vine leaves stand out. A diversity of ornamental motifs of different origins coexist in this monumental arch. 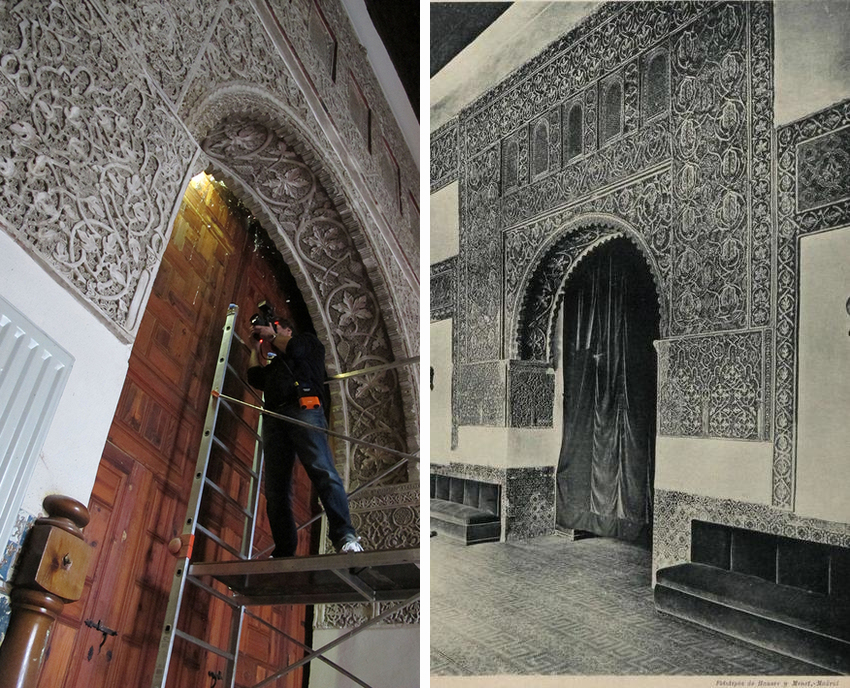 A historical photo of the arch in 1897 by Hauser & Manet. Courtesy of Toledo Olvidado by Eduardo Sánchez Butragueño 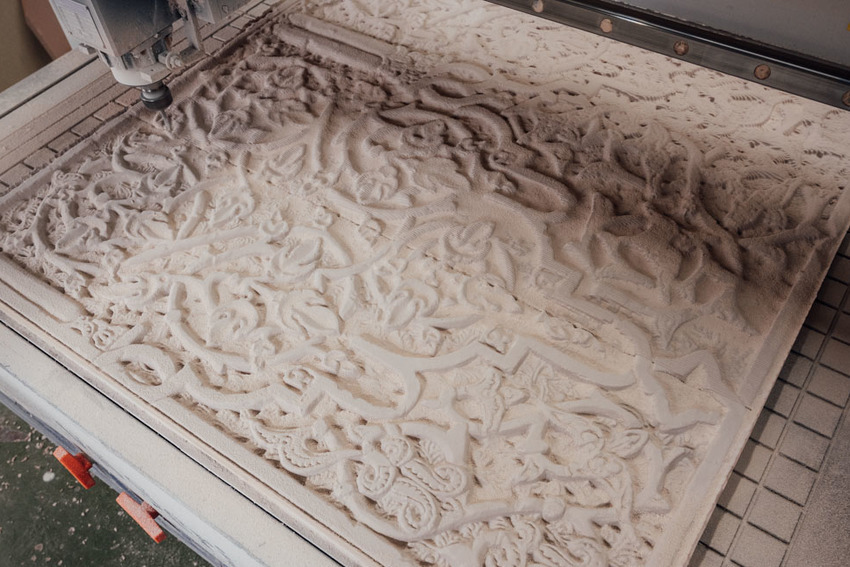 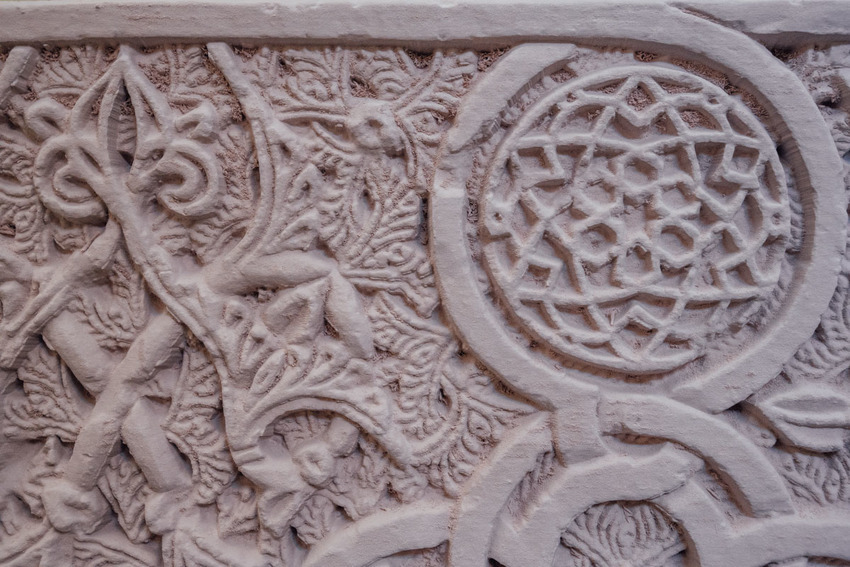 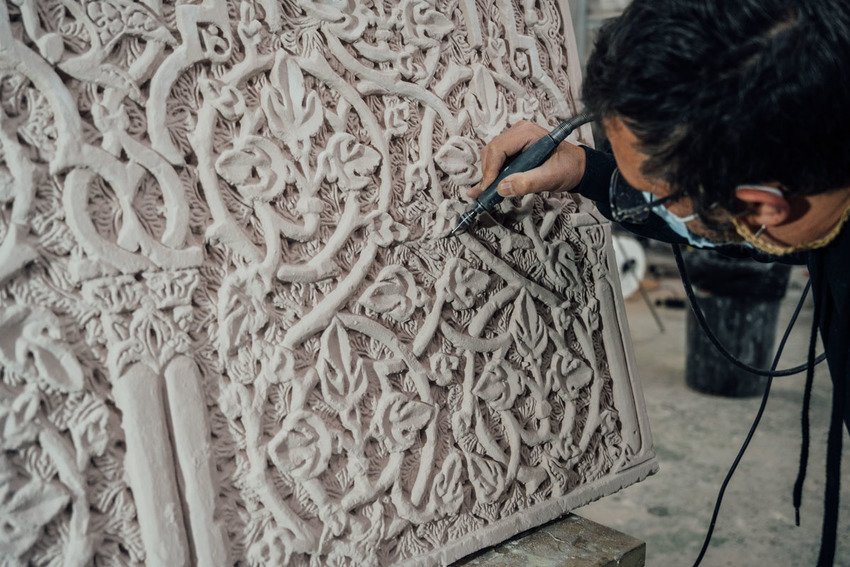 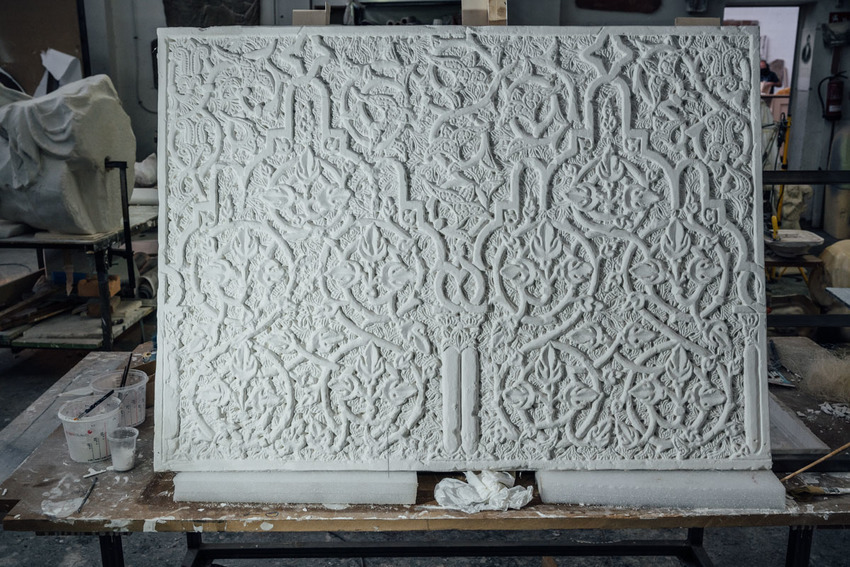 The Synagogue of Samuel ha-Leví, or Sinagoga del Tránsito (now part of the Museo Sefardí) is located in the old Jewish quarter of Toledo and is considered the most beautiful and best-preserved medieval synagogue in the world. Built between 1355 and 1357, it is named after Samuel ha-Leví Abulafia, an influential figure in 14th century Spain and Treasurer to Pedro I, King of Castilla y León (1350-1369). At this time the construction of synagogues was prohibited, but King Pedro wanted to acknowledge the support shown towards the Crown by the Jews.

In El Tránsito, heraldic themes are merged with Hebraic texts. A running frieze of text exalts the figures of King Pedro I, Samuel ha-Leví (described as a man fighting for peace and a great builder) and his architect, Rabbi Don Mayr. The frieze sits beneath the coats of arms of Castilla y León, set into ornate decorations of vines and leaves over geometric patterns. The exaltations are interspersed with Davidic psalms and praises to Yahweh, in gratitude for the protection they have received. The north wall, known as the ‘east heckhal’, is richly decorated with arabesque forms. 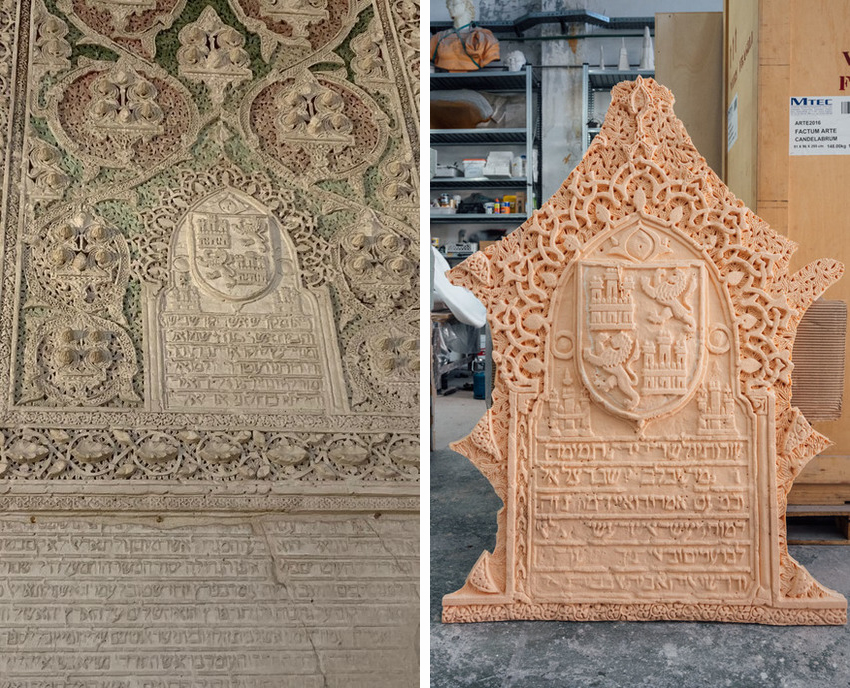 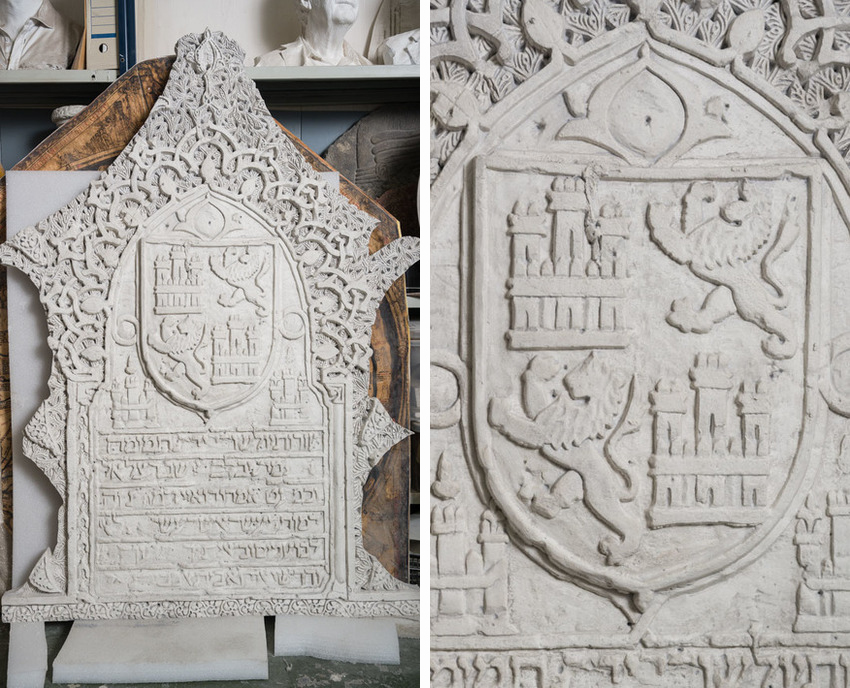 Detail of the shield 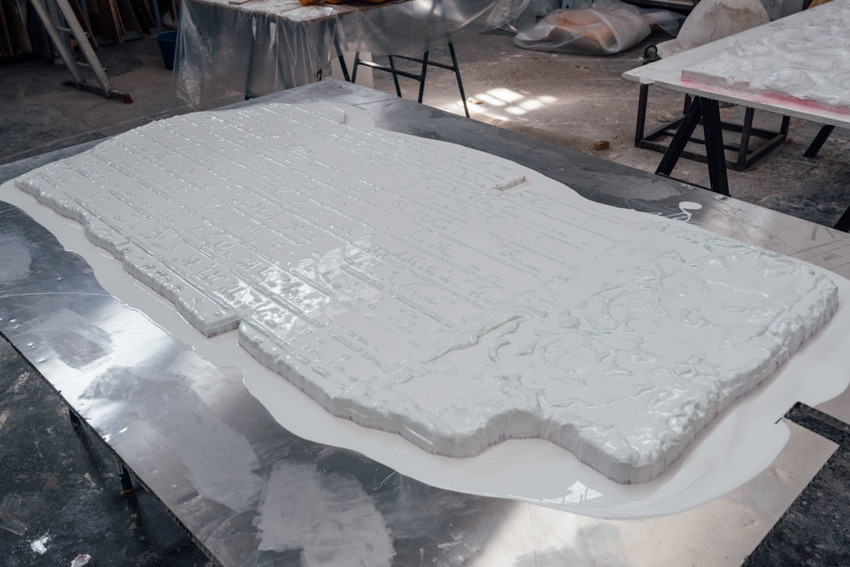 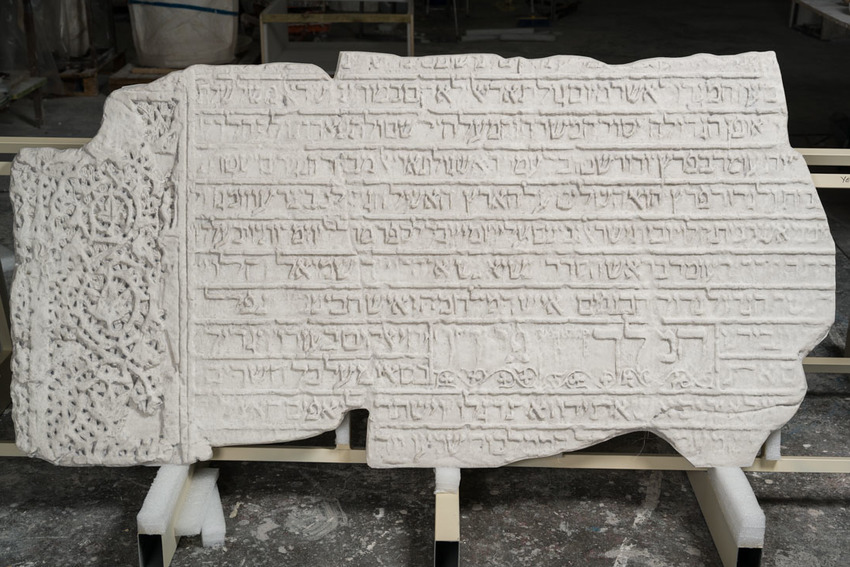 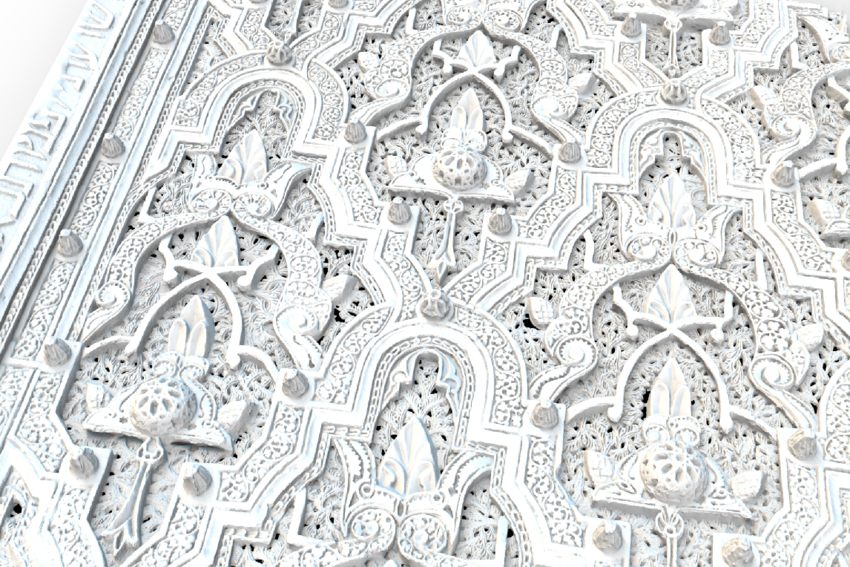 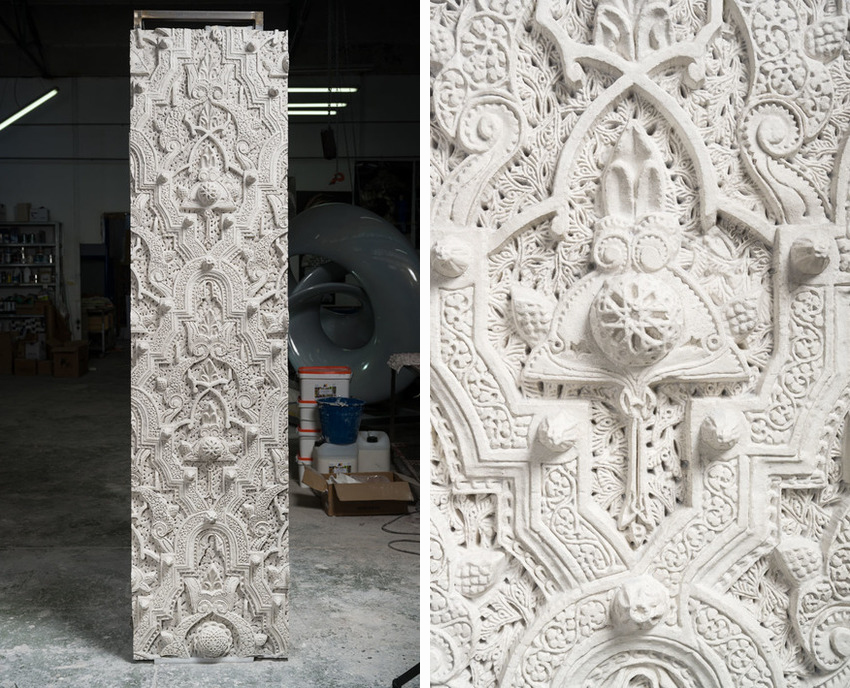 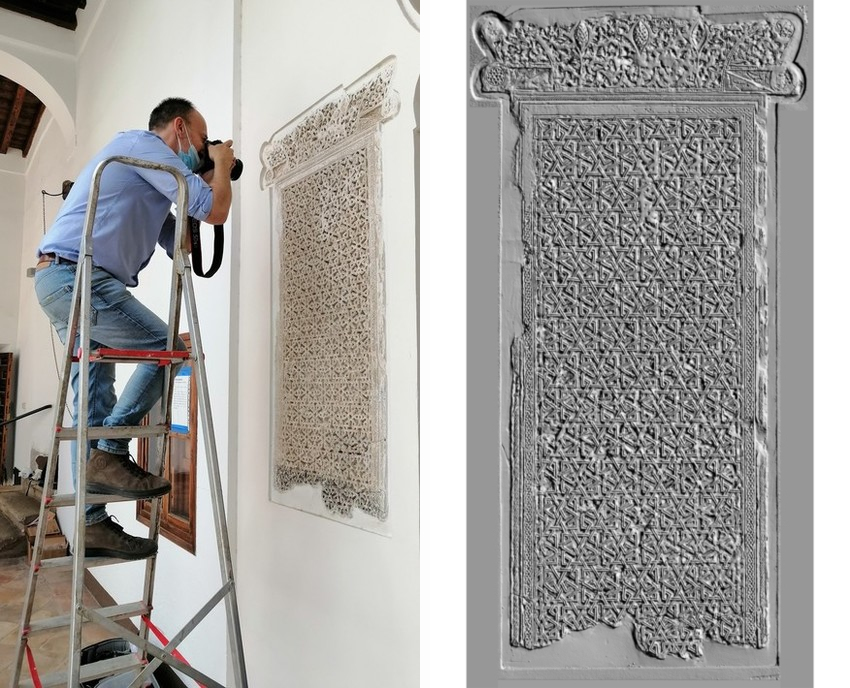 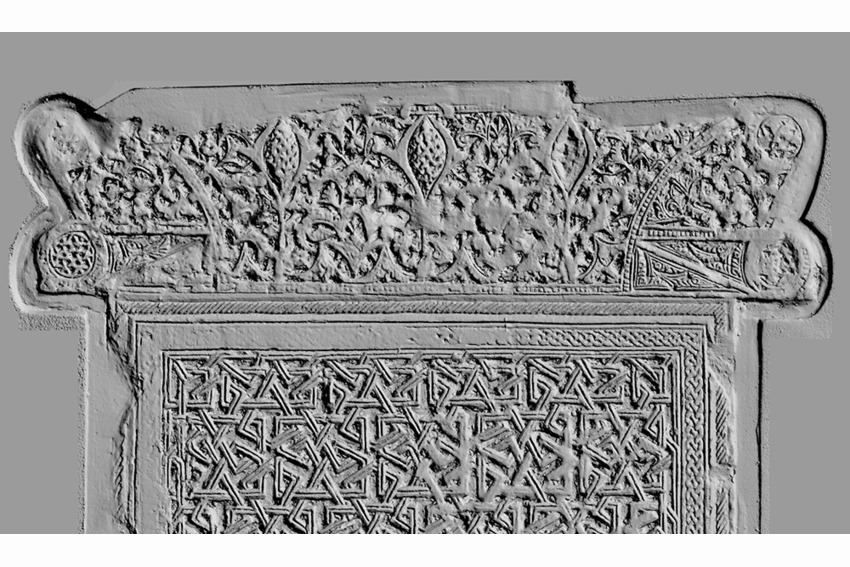 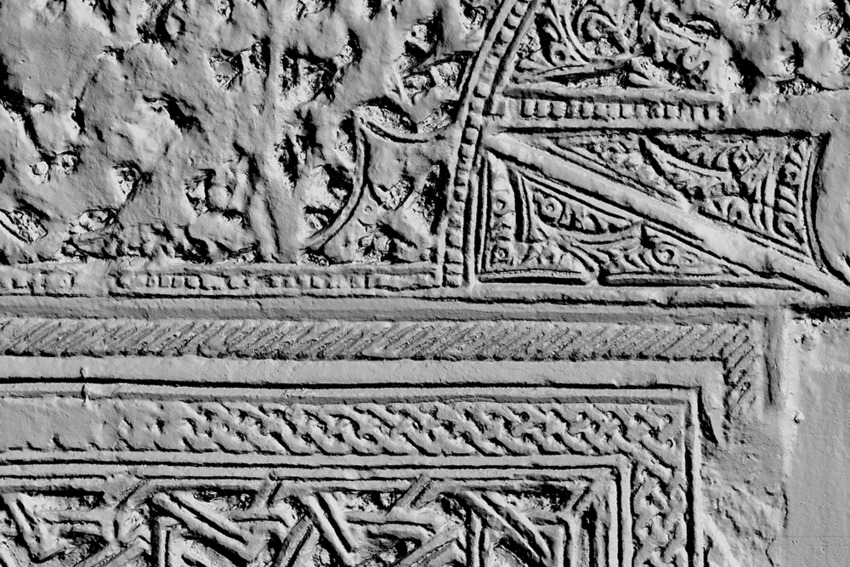 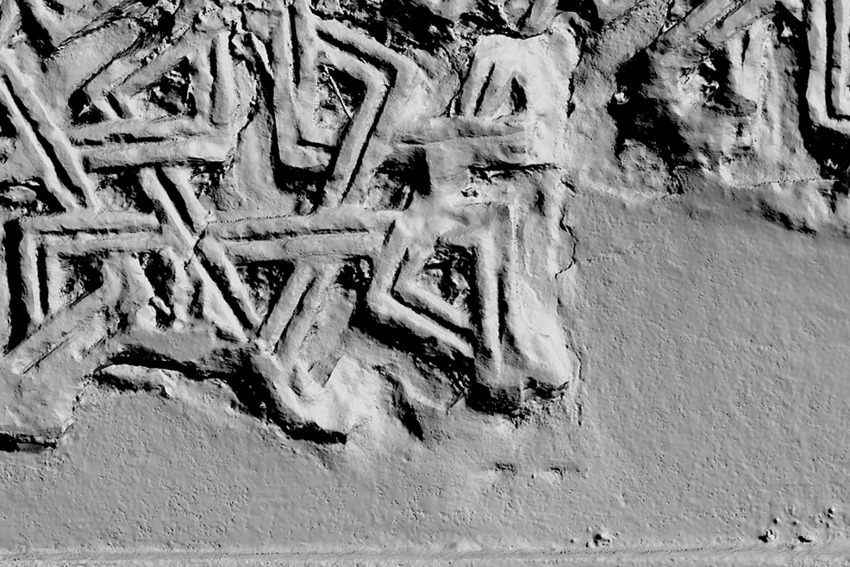 Palace of Pedro I, Real Alcázar, Seville
1356-1366, carved plaster
Recorded and reproduced with permission from the Real Alcázar de Sevilla and the Ayuntamiento de Sevilla

The plasterwork repeats the Arabic phrase izz li-mawlana al-sultan don birdu ayyadahu Allah (Glory to our lord the sultan Don Pedro, so help him God), asserting Pedro I’s legitimacy through epigraphic inscriptions and heraldic iconography. Pedro I, a Catholic King, was using the name of Allah, written in Kufic script by Islamic craftsmen, to enforce his earthly power.

The calligraphic style of Arabic used in these yeserías originated in the city of Kufa in Iraq and spread across Europe alongside the expansion of Islam and the Umayyad conquest of Spain (711 CE). It is sacred in character, as it was used to depict the Koranic text in mosques and Islamic manuscripts, identifiable in its use of square and angular lines with bold spherical forms embedding the text into the decorative embellishments.

The Palace of Pedro I, built between 1356 and 1366 is a masterpiece of Mudéjar art and simultaneously, one of the most significant monuments of medieval architecture in Spain. The Palace is structured around two courtyards, the Patios de las Muñecas and de las Doncellas, which distinguished the monarch’s private and public spheres. The Christian building was constructed on top of the remains of the Almohad structures, demolished and overbuilt as a political statement.

Today, Pedro I is celebrated as a patron of Mudéjar style associated with the Islamic culture of Al-Andalus. He developed a close friendship with Sultan Muhammad V, ruler of the Caliphate of Granada and his court was culturally diverse, with Jewish Ministers including Samuel ha-Leví. 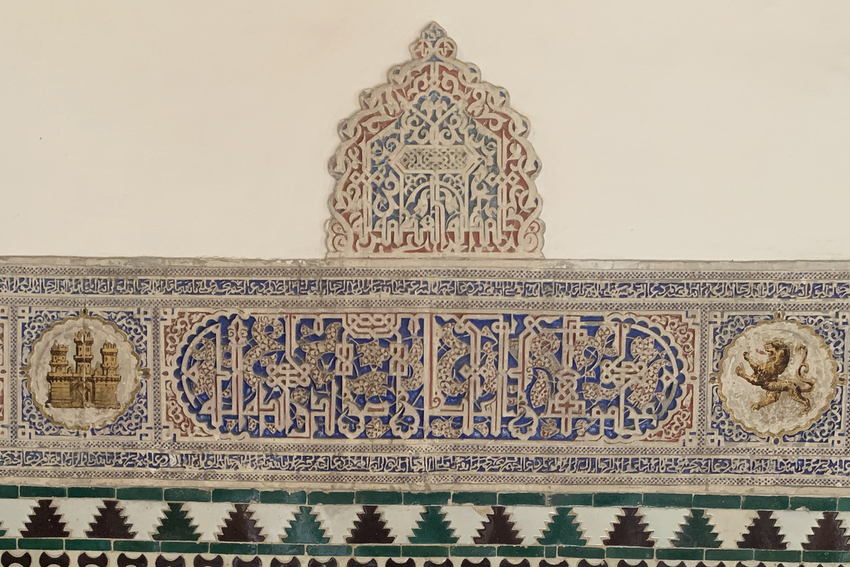 The original yesería in the Sinagoga del Transito © Factum Foundation 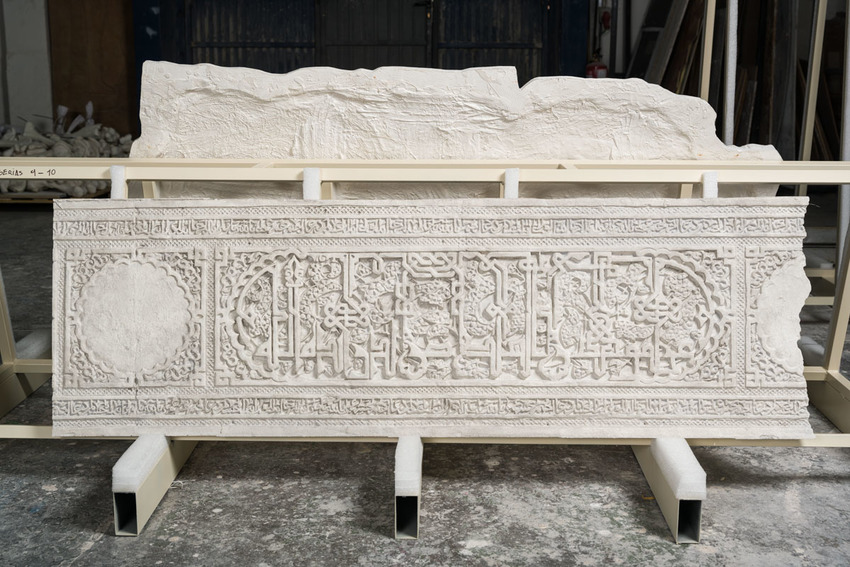 Back to The Spanish Gallery main index