Digitisation of Islamic Manuscripts in Dagestan

Factum Foundation for Digital Technology in Preservation has been working with the Institute of History, Archaeology and Ethnography (IHAE) in Makhachkala (Dagestan), in collaboration with the Ziyavudin Magomedov PERI Charitable Foundation (Moscow, Makhachkala) and the Juma Al Majid Centre for Culture and Heritage (Dubai), on an ambitious project to record and conserve an archive of Islamic manuscripts that belongs to the IHAE. The project at the IHAE is based on a model for sustainable cultural preservation that Factum is developing in other contexts, for example, with the Theban Necropolis Preservation Initiative in Luxor.

The model revolves around technology transfer and the provision of training initiatives with local partners, as well as guidance in data archiving and dissemination. The project also works within the bounds of the ReACH declaration, an initiative on standards and best-practice for the digitisation of cultural heritage spearheaded by the Victoria & Albert Museum (London) and the Peri Foundation.

The IHAE holds a world-class archive of more than 3000 Islamic manuscripts that date from the 11th to the 20th centuries, alongside an extensive collection of letters and early Arabic printed books. Private collections in Dagestan are thought to represent an even greater and almost entirely unstudied resource of over 25,000 manuscripts. The wealth of these collections attests to the importance of scholarship and the Islamic written tradition in the northern Caucasus from the Middle Ages onwards. The region’s significance, however, has not been reflected in Western scholarship, in large part due to the difficulty associated with accessing the relevant materials.

As part of a wider preservation effort that also involves the conservation of manuscripts in their archive, the IHAE is digitising its own collections and, looking forwards, is planning to record and make available for study as many privately-owned manuscripts as possible.

Since 2016, Factum Foundation has provided hardware, software and technical support to the IHAE’s Scanning Lab, which has recorded well over one third of the archive to date. This has included the provision of two custom-made photographic manuscript scanner prototypes and accompanying software, together with remote technical supervision and advice for scanner operators and staff at the IHAE. 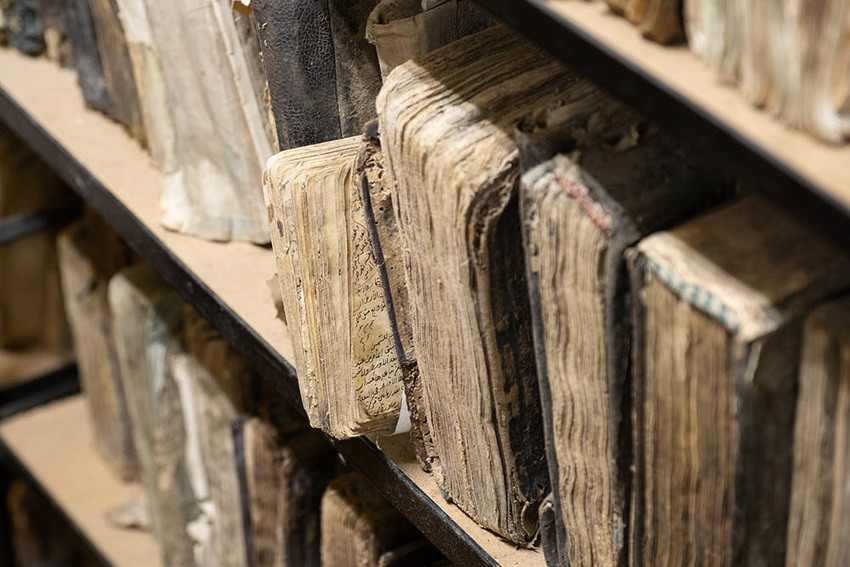 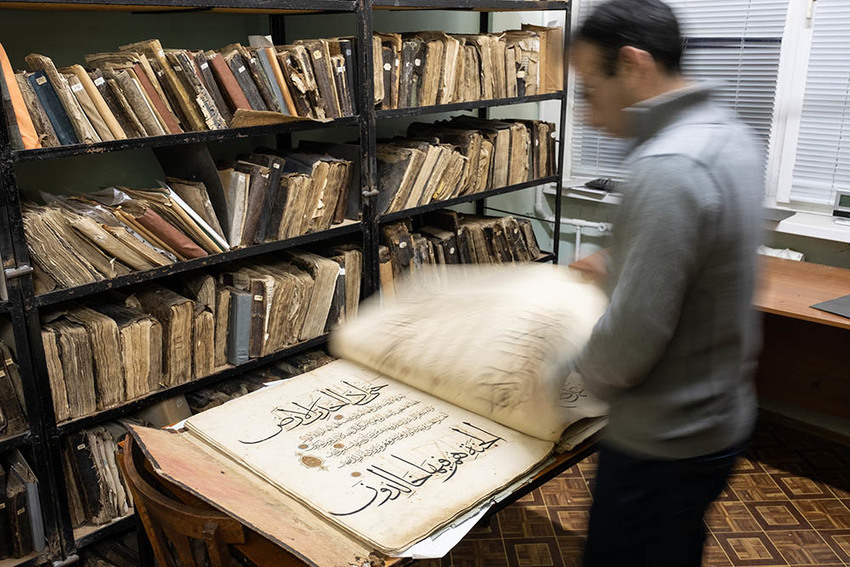 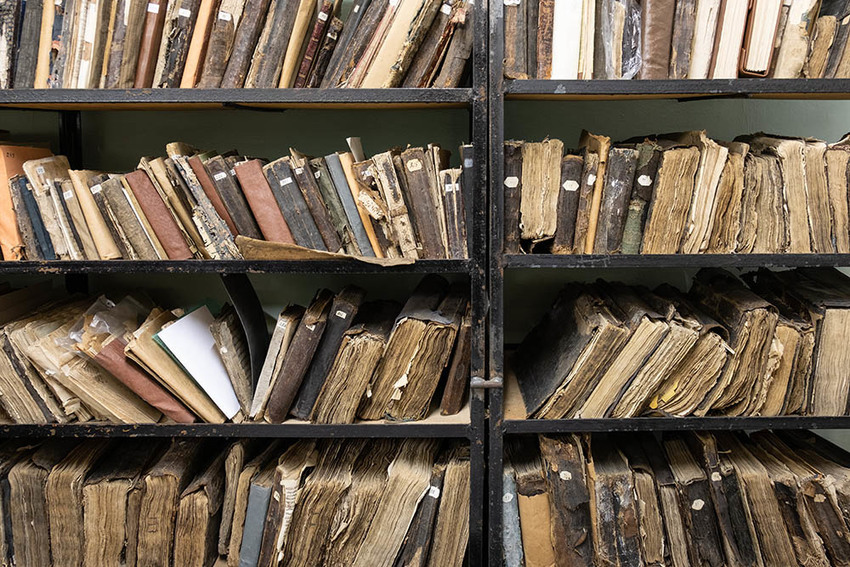 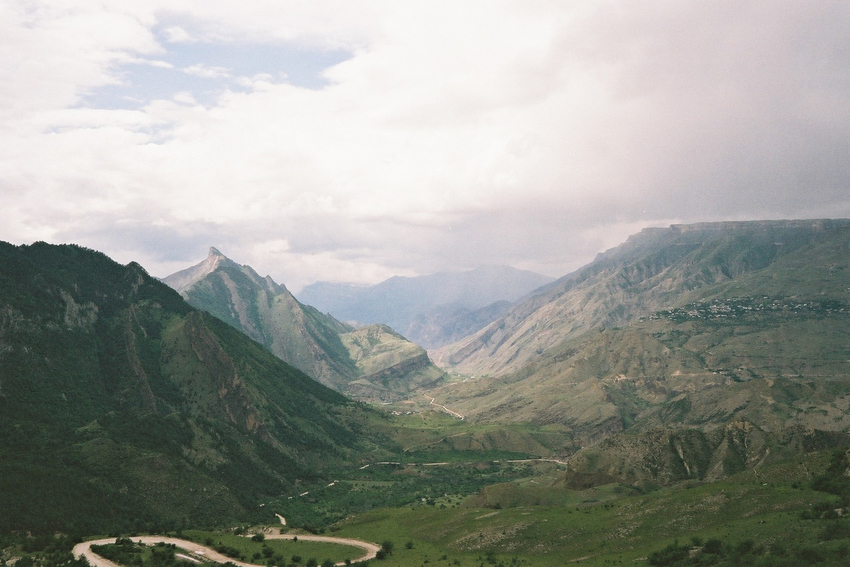 The Northern Caucasus in Dagestan. Private collections are thought to hold over 25,000 manuscripts © Factum Foundation

Manuscript Tradition in the Republic of Dagestan

Dagestan is in the Russian North Caucasus on the Caspian Sea. It is an ethnically diverse mountainous region – over thirty distinct languages are spoken within its borders. Its cultural and artistic heritage was shaped in part by its position at the crossing point of the Roman, Sasanian, Arabian, and later Persian and Russian empires. The relative isolation of the North Caucasus mountains also encouraged an individualisation of religious practice, which meant that Zoroastrianism, Judaism, Christianity and Islam were all adopted at various points in its history, often coexisting for several centuries. In the present day, forms of paganism and mysticism are still found together with Islam in isolated mountain villages.

This was a productive environment, one that encouraged a thriving manuscript tradition that developed alongside scientific, literary and religious scholarship. Following the adoption of Islam in the 8th and 9th centuries, manuscripts copied in the great Islamic centres of the Middle East and Central Asia were brought to Dagestan via silk trade routes. From the 14th century onwards, Dagestani scribes produced their own copies of well-known texts, and of works by lesser-known Dagestani authors. The Islamic cultural revival of the 19th century culminated in a period of immense richness for Dagestani literature and poetry reflected in the large number of manuscripts that were written and copied in this period.

In the early 20th century, cultural and religious life in Dagestan stagnated under the Soviet Union, and many of Dagestan’s manuscript collections were lost, destroyed or severely damaged. The decline was partially reversed with the establishment of an archive of Islamic manuscripts at the IHAE in the 1950s, the result of efforts by a number of Dagestani scholars interested in the tradition of Islamic manuscripts, in particular by the historian Magomed-Said Saidov. The IHAE collection is representative of the diversity in tradition, scholarship and language in Dagestan from the middle ages to the 20th century – the manuscripts in the archive cover a variety of subjects, including Arabic grammar and lexicography, logic, the history of the Caucasus, literature and poetry, ethics, astronomy, philosophy, and Islamic law. Religious texts include Korans, tafsirs and hadiths, as well as a number of works on Sufism.

In the image slider below are a number of pages recorded with the Photographic Manuscript Scanner. The images are taken are from an interesting Dagestani manuscript in the IHAE collection, the Al-Qawl al-sadid fi jawab risala Sa'id, which can be translated as 'A sensible speech in reply to Said's composition'. Dr Shamil Shikhaliev, an Head of Manuscript Collections at the IHAE , explains that it was written in response to the Dagestani scholar Sayid al-Arakani, who allowed Muslims to drink the locally produced fermented barley drink known as 'Buza. Inhabitants from the village of Zerani requested a clarification on this point from the scholar Jamaluddin Kazikumukhsky, who replied that since fermented barley juice is alcoholic and therefore intoxicating, Muslims should not be allowed to drink it. This type of information on Dagestani customs and religious scholarship in the Caucasus has rarely been available to international or even Russian scholars and it is hoped that the IHAE archive will become known to a new generation of academics as a result of this project. 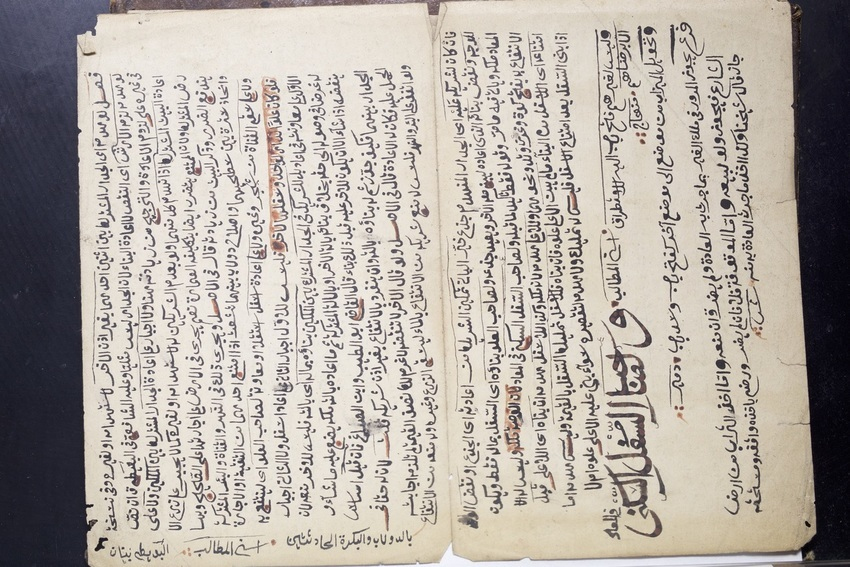 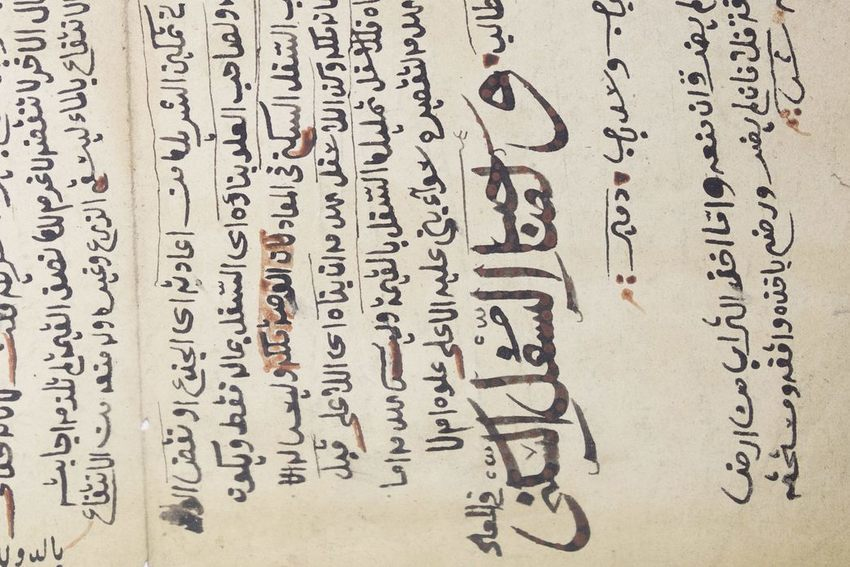 Loose leafs are photographed on white paper, front and back where they were originally found inside the manuscript © IHAE 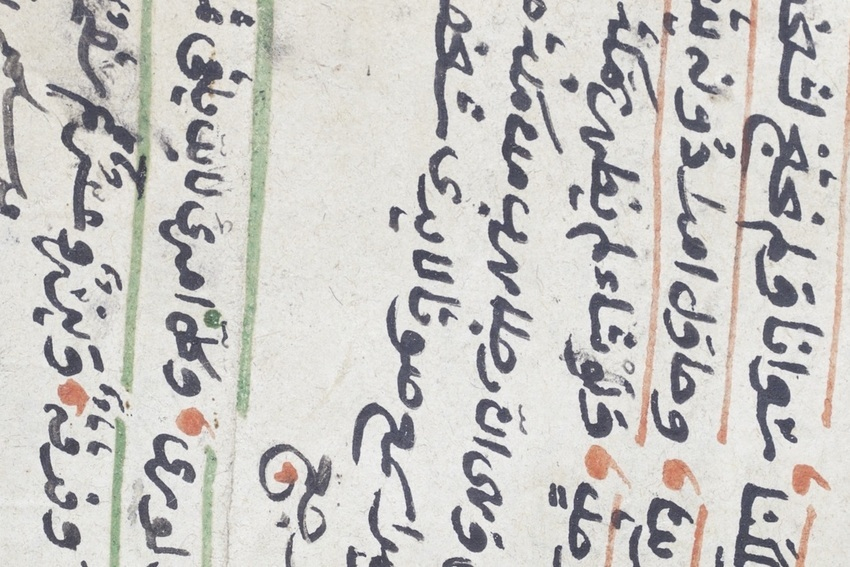 Recording the Archive and Technology Transfer

From 2016-2018, Factum Foundation designed hardware and software for two manuscript scanner prototypes for the IHAE Scanning Lab. A team from Factum gave short on-site training sessions for scanning operators at the IHAE and remote support has been provided to operators since the installation of the Photographic Manuscript Scanner in 2017.

With the installation of a portable system in 2018, the digitisation of private collections in the Dagestan mountains became possible. The data - over 1000 manuscripts had been digitised by September 2018 - is stored on a dedicated server and will be published online in future phases of the project.

Factum Foundation’s two prototypes supplement an older scanner – the ELAR flat-bed scanner, a user-friendly and stable system that employs its own software to produce images at 300 dpi. However, the scanner is slow and requires the operator to work in near-darkness. Moreover, its post-processing software - which outputs TIFF format image files - is opaque and produces image files that often do not reach the advertised resolution. 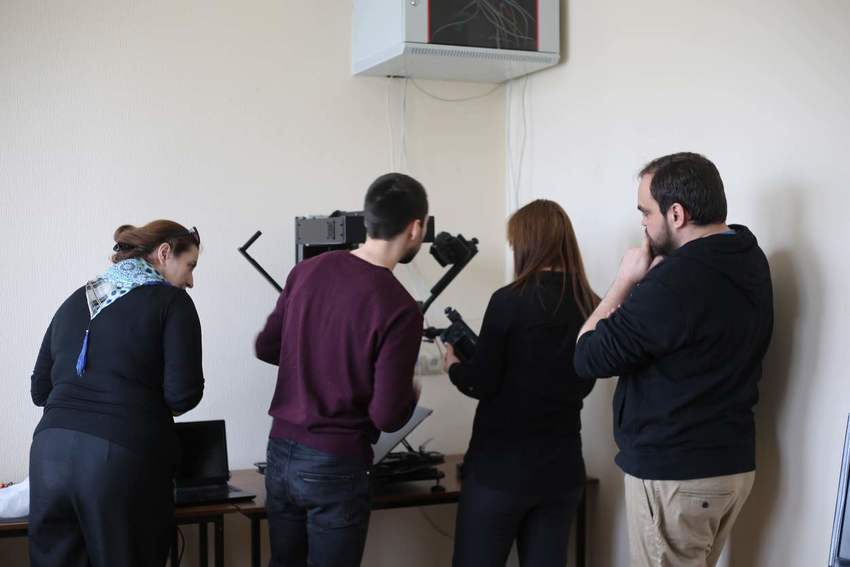 The Photographic Manuscript Scanner is a v-shaped scanner. The operator brings the methacrylate plates into contact with book, gently flattening the pages without risking the integrity of the paper or applying pressure to the binding. The Canon 5DSR cameras are activated through the custom-made ManuCapture software and the images (with resolutions up to 800 dpi) are automatically downloaded onto the computer. The operator lifts the plate to turn the page and continue the recording. Unlike many commercial manuscript scanners, Factum’s uses relatively inexpensive photographic equipment to produce very high quality images with a real material quality such that even fine details such as the type of paper fibre can be identified. 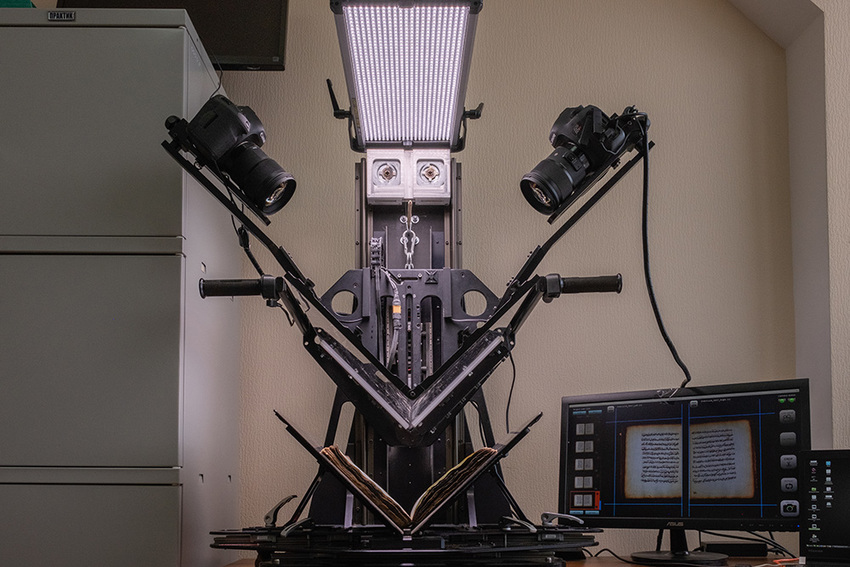 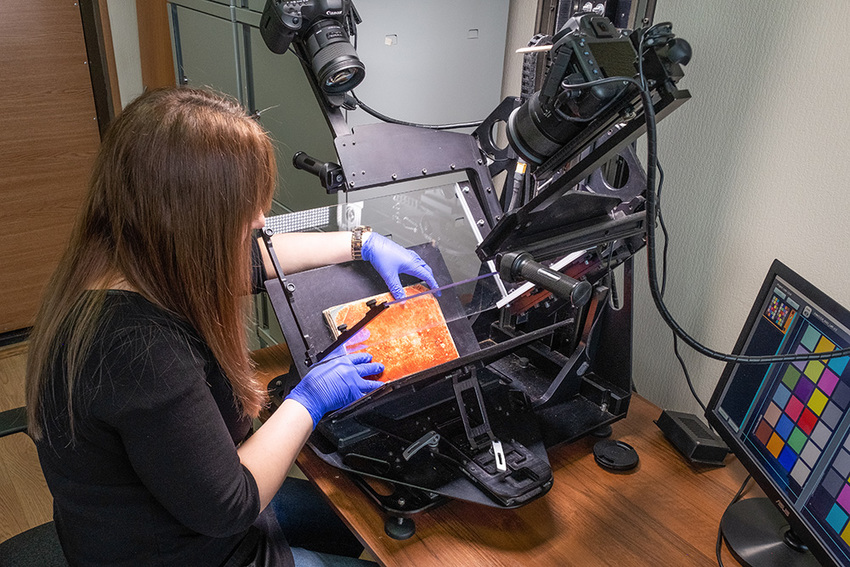 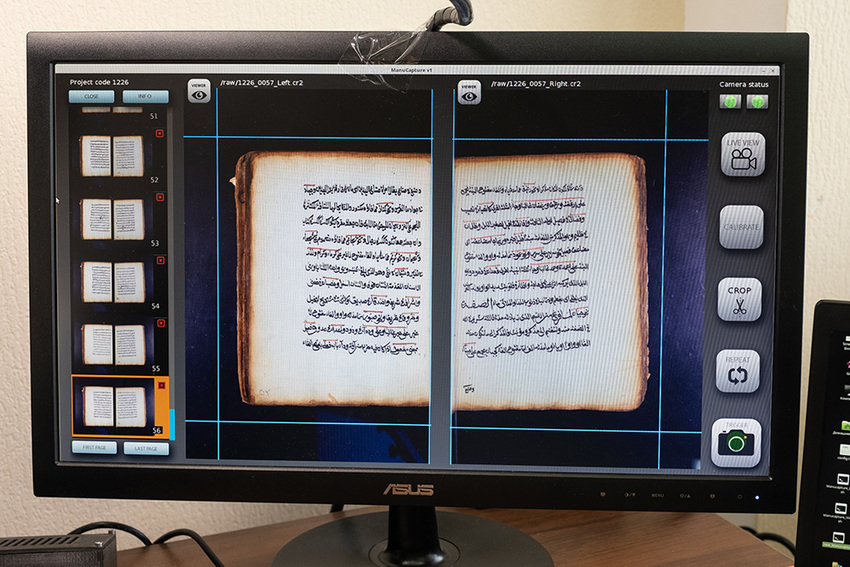 The portable manuscript scanner is lightweight, easy to assemble and fast. It uses two Canon 7Ds and flash-lighting to produce repeatable quality images at 300 dpi in any environment. It combines standard photographic hardware with custom made pieces, all of which are easy to replace or remake, so that components can be quickly and cheaply replaced without the need for specialist assistance. The scanner will be used to digitise private collections in the mountain villages of Dagestan and to speed up the process of recording the manuscripts in the IHAE archive. 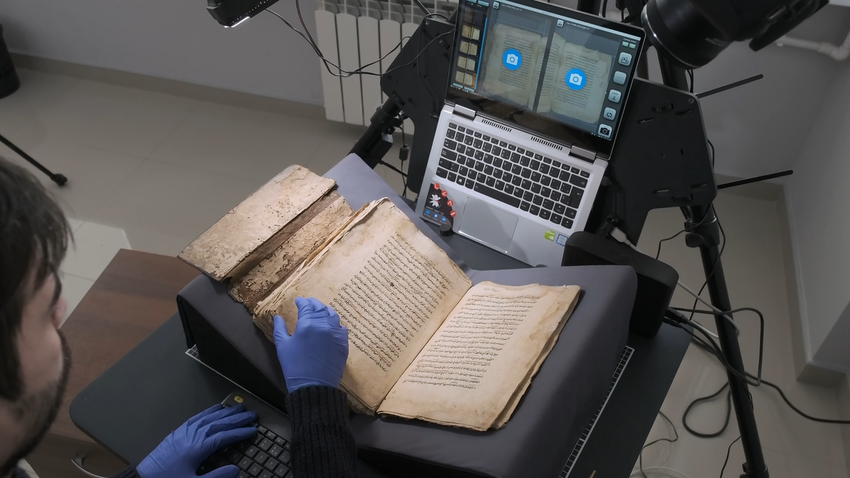 Conservation Laboratory at the IHAE

In 2015, the artist Rachid Koraichi introduced Factum Foundation to Bassam Dagestani, an expert in oriental manuscript restoration and conservation from the Juma Al Majid Centre for Culture and Heritage. As part of the collaboration, the Juma Al Majid Centre has supplied state-of-the-art paper conservation equipment to the IHAE and provided training in manuscript conservation and restoration to three young Dagestani women who have worked on books from the IHAE archive since 2017. 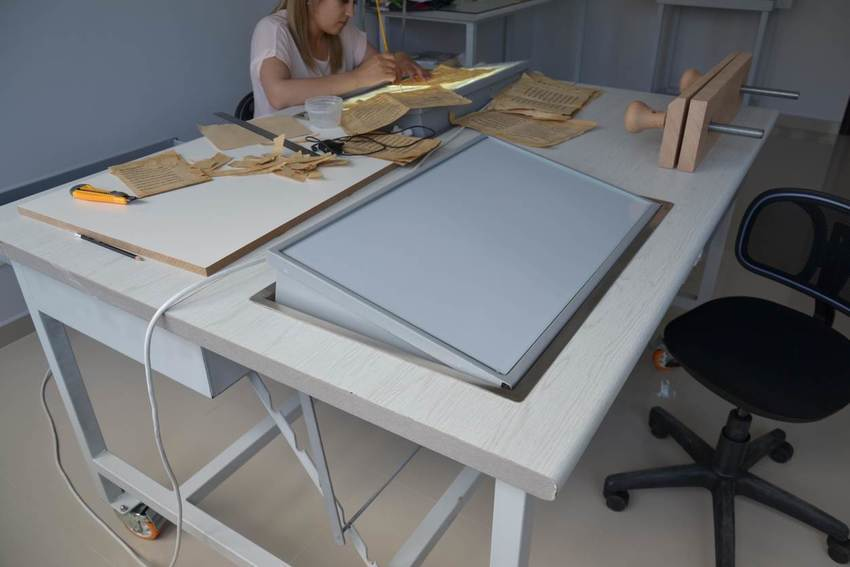 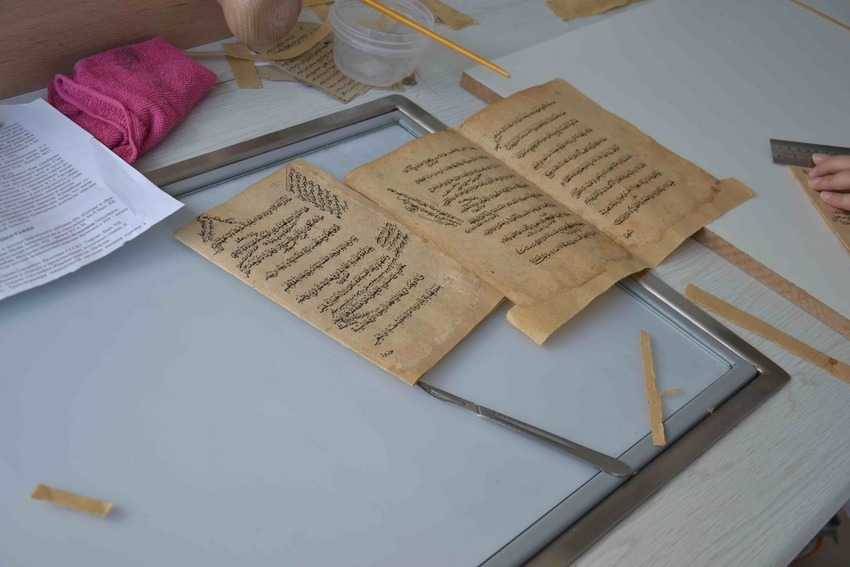 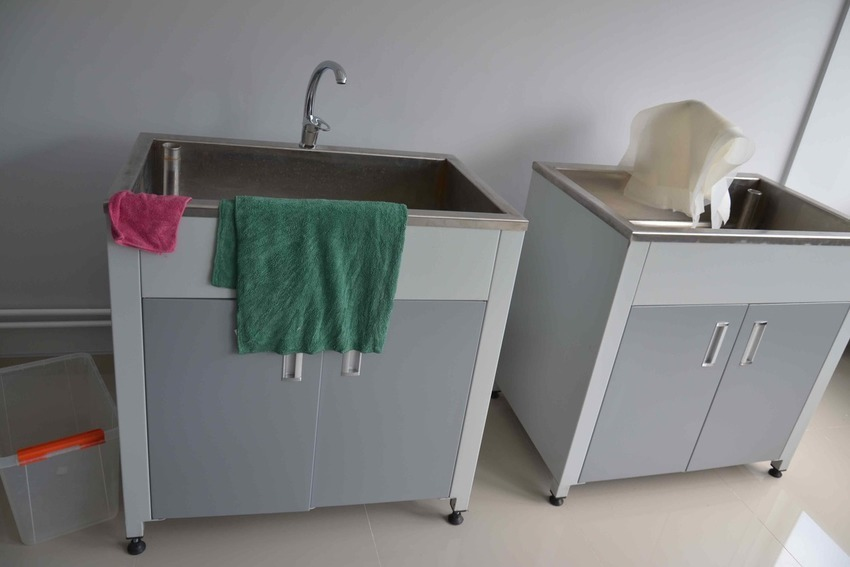 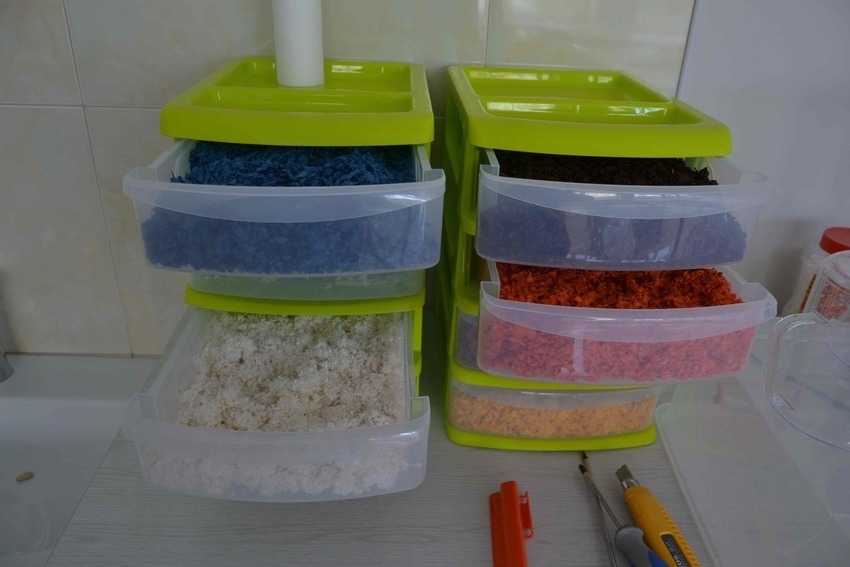 Special thanks to renowned artist Rachid Koraichi for his support and advice throughout the project.

Read more about the project in ALUMINA's October 2019 issue - in Italian or English.