Mindful Hands. Masterpieces of Illumination from the Fondazione Giorgio Cini

On September 16th 2016, Mindful Hands. Masterpieces of Illumination opened its doors to the public at the Fondazione Giorgio Cini, Isola di San Giorgio Maggiore in Venice. This large exhibition is another collaboration between the Fondazione Cini, Michele de Lucchi and Factum Arte, with music by Nathaniel Mann and support from the Helen Hamlyn Trust and Pirelli.

After the opening of the exhibition, Professor Sandra Hindman wrote:
"The exhibition Mindful Hands that opened last night at the Cini Foundation sets a new high standard for exhibitions on medieval miniatures…. The design by the architect (Studio Michele de Lucci) of the display is breathtaking, the miniatures themselves spectacular (some of the best in the world) and in great condition and beautifully lit to be appreciated. This collection is one of the largest and most important worldwide and it has never been exhibited or fully catalogued and only a tiny part ever studied. There is a video by Adam Lowe of Factum Arte that is a work of genius (on making medieval manuscripts), also breathtaking. It is, quite literally, the very best show of its kind I have ever seen, and I've seen them all for the last nearly 50 years."

For the first time in over 35 years, the Sala del Convitto at the Fondazione Giorgio Cini, will display more than 120 works from one of the most important collections of 236 Medieval and Renaissance miniatures worldwide - once acquired by Count Vittorio Cini from the Libreria Antiquaria Hoepli in Milan in 1939-1940, and presented to the Fondazione Cini in 1962, the collection is made up of anthologies of illuminated leaves and codices, including works from the main Italian schools of manuscript and some of the most pre-eminent illuminators from the 12th to the 16th centuries. 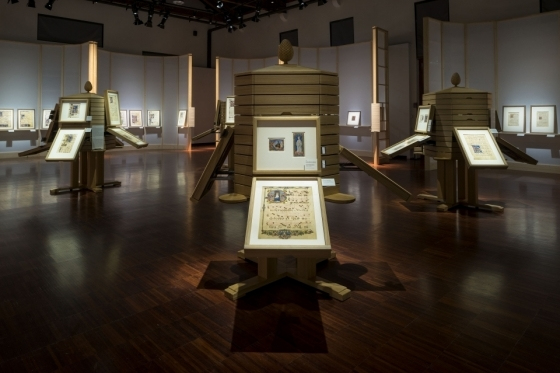 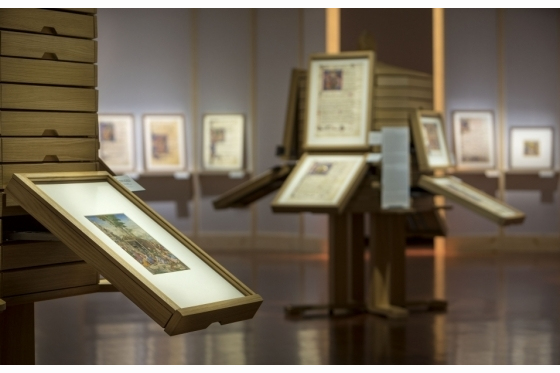 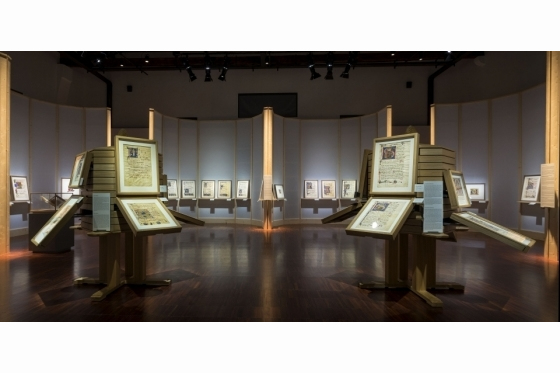 Comparable both in style and quality to collections such as the Wildenstein, now in the Musée Marmottan, Paris, or the collections of the Getty Institute, the Cini Collection presents mostly liturgical works (graduals and psalteries).

Factum Arte’s contribution to the second part of the exhibition, on the upper floor, begins with a video that follows the making of an illuminated manuscript: from the killing of the goat, to the preparation of vellum and different pigments, to the painting and binding of the book. The focus is always on the 'mindful hands' that give the exhibition its name. Cuttings was produced by Luke Tchalenko, working closely with Adam Lowe, Carlos González, Toni Catalá, Spike Bicklow, Sebastian Beyro and many other craftsmen from Factum Arte. 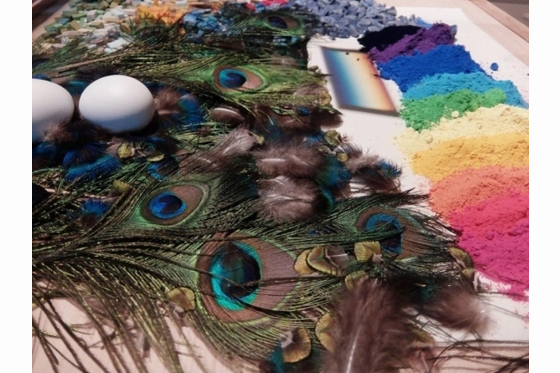 Pigments obtained through the most traditional techniques for Cuttings 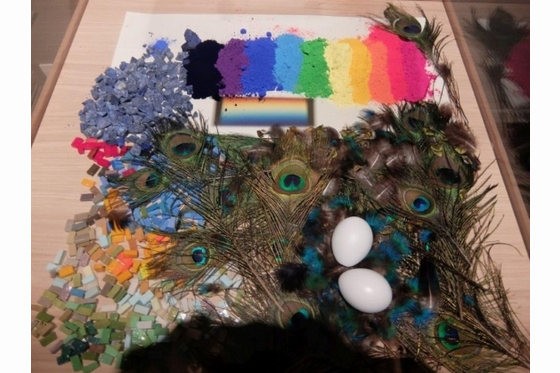 Among the works exhibited is a 1:1 facsimile of the Offiziolo di Carlo VIII, commissioned by Ludovico il Moro recorded using a specially designed book scanner and made by the team at Factum Arte. This miniature manuscript (6 x 3 cm) consists of 422 pages of exquisite illumination and inventive typography. The original prayer book (Book of Hours) was made in the late 15th century in the Lombardy region of Italy by the workshop of Giovanni Pietro Birago on the instruction of Frederico il Moro, the Duke of Milan, for Charles VIII of France. The display the facsimile of the manuscript is displayed so it can be handled by the public. On the walls are A3 sized enlargements of each illuminated text presented so the details of the craftsmanship can be studied carefully.

In order to record this highly delicate book, Factum Arte devised a system based on an LED-lit system with a mirror on one side to obtain high-resolution photographs of each individual page without it applying pressure on the original. 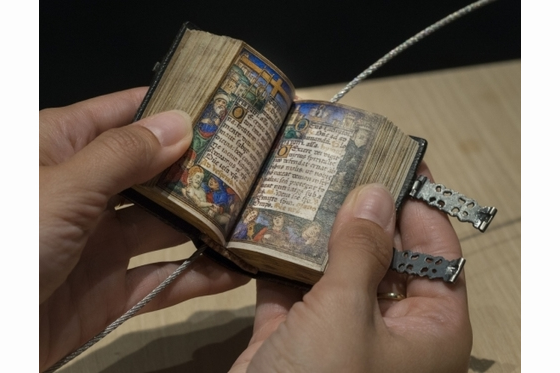 Facsimile of the Offiziolo of Charles VIII 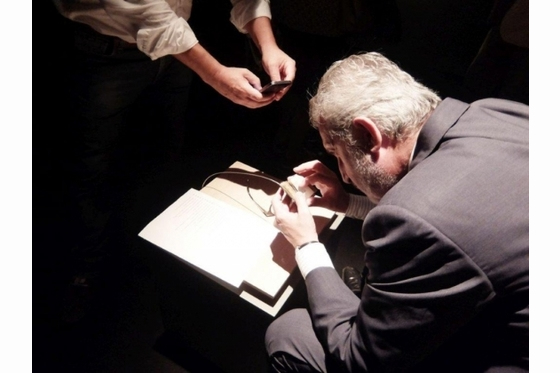 Alongside the Offiziolo are 10 enlarged facsimiles of pages from the Martirologio di Ferrara from the confraternity of Battuti Neri di Ferrara (1489). The Martitiologo was read to those sentenced to death, and in addition to depictions of Christ’s suffering, there are illuminations of the passion and martyrdom of the saints. Factum Arte evokes the penitential and meditative path accompanying the last steps of those condemned to death by producing an installation that brings out the profound sense of how the Martirologio was used by the Ferrarese brotherhood of the Battuti Neri - guiding visitors through the last section of the exhibition, dedicated to highlighting the techniques involved in making illuminated manuscripts. Factum Arte has commissioned Nathaniel Mann to conceive and perform a musical accompaniment to the Mindful Hands. Masterpieces of Illumination exhibition that emphasises the theatrical ritual value of the images within the logic of C14th and C15th forms of religious discipline. Nathaniel Mann has “purified” the sound of Gregorian chants, recorded by Father Pellegrino Ernetti (a Benedictine monk on San Giorgio who died in 1994) in the 1960/70s, by processing digital signals which at the time of Ernetti’s research were not available, improving the natural tones and revealing new music, alluding to the theme of martyrdom. 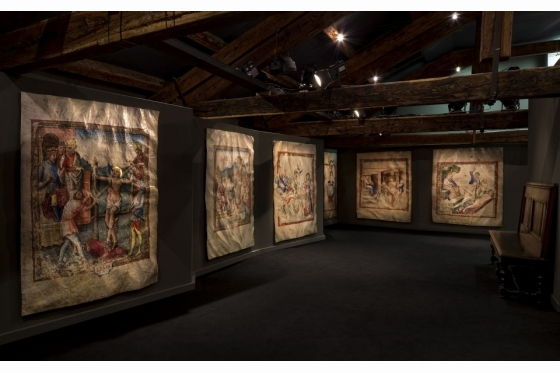 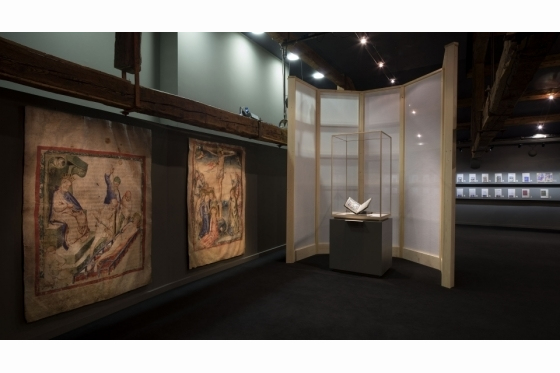 Included in Factum´s contributions is also a video, named filmed by Luke Tchalenko of all the stages of the reproduction of an illuminated manuscript. Cuttings documents the traditional production of a parchment sheet, the making of colour pigments, decoration and bookbinding techniques, from the killing of the goat to the highly toxic oxidation of lead with vinegar fumes.

This phenomenal exhibition, the result of over three years work involving over forty scholars and restorers, was curated by Federica Toniolo, a lecturer in the History of Illuminated Manuscripts at the University of Padua, Massimo Medica, director of the Museo Civico Medievale, Bologna, and Alessandro Martoni, Fondazione Cini Institute of Art History.

"Mindful Hands is part of the series of major exhibitions that the Fondazione Cini periodically holds to showcase its own collections, a remarkable heritage in historical, artistic and scholarly terms but little-known to the wider public”, explains Pasquale Gagliardi, Secretary General of the Fondazione Cini. “We have been working on this ambitious project focused on the collection of miniatures for years. The collection is unique in Italy and among the few of such high quality in the world. We achieved excellent results in terms of visitors and critical reception for the 2010 exhibition on the etchings of Giambattista Piranesi, for which all the works came from the archives of San Giorgio Maggiore. This encouraged us to continue the mission of promoting the so-called minor arts. And in fact the illuminators’ superb craftsmanship is in no way inferior to that of artists in other sectors of art.”