The restoration of the Basilica of San Petronio is a collaboration between Felsinae Thesaurus and the Basilica di San Petronio that started in 2010. The previous restoration took place between 1972 and 1979 under the supervision of the Superintendent of Bologna. An important part of the latest restoration work was to analyse the success of previous consolidation attempts and to remove the resins that were causing damage to the stone. One of the main tasks of the contemporary conservation practice is the high resolution recording in both colour and three dimensions in order to successfully monitor the rate of decay - both looking back over the past 30 years and looking forwards. 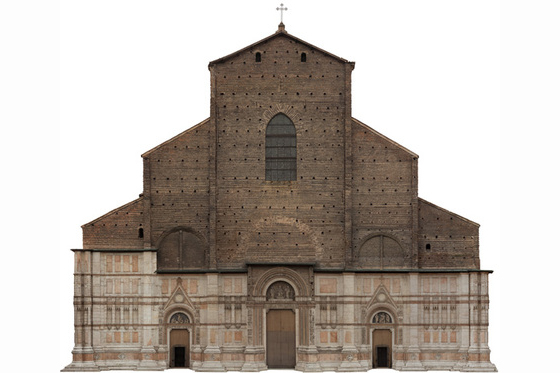 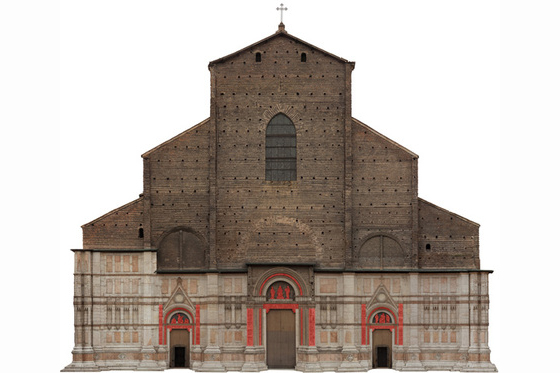 In red the zones that have been scanned.

It was for this reason that Factum Arte was commissioned to carry out high-resolution 3D scanning of all the sculptures on the three main doors of the unfinished facade. The recording work, both white light scanning and high resolution photography was carried out at the same time as the restoration work, which was undertaken by the Opificio delle Pietre Dure and the Bolognese restoration company Leonardo. 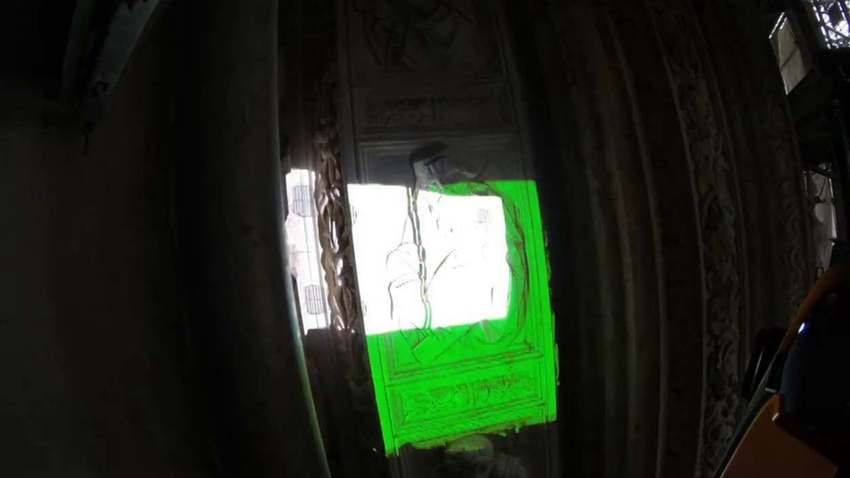 In this time lapse video one can see the 3D scanner in action, trying to go around obstacles (scaffolding and other architectural elements) to scan from different angles to reach undercuts.

The documentation began in April 2013, after a 2011 test scan of the figure of San Petronio by Jacopo della Quercia on the right hand side above the central door. The main purpose was to test the NUB 3D Sidio white light scanner, at various resolutions and to ensure that the scaffolding was stable enough for the relatively long exposures required to record data at 135 microns and 250 microns - from the start the intention was to push to the practical limits the potential offered by high-resolution scanners and to establish a protocol that would provide data for both virtual/screen based uses and for the production of exact facsimiles of the pieces if these were ever required (sadly this is required all too often!). A series of tests at different resolutions was carried out. 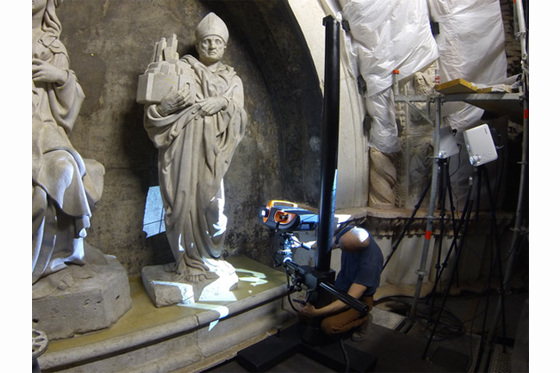 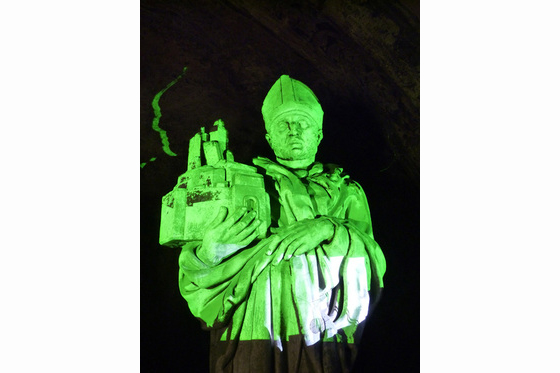 The city of Bologna cradled in San Petronio's arms

The data was processed and some physical 're-materialisations' were made. Many conversations followed with architect Roberto Terra and with the responsable of the basilica Father Oreste about exactly what was required. It was then decided to undertake a scanning project that would define 'high-resolution scanning' for the forseeable future.

The unparalleled accuracy of the recording carried out by Factum Arte's team wants to ensure that there will be a serious debate about the best way to preserve the statues on the facade of the church. A vast 3D and colour archive has been created that documents the beguiling beauty of work of the artists that adorn the facade; works by the great Jacopo della Quercia, the eccentric Amico Aspertini and a host of other artists: Niccolo' Tribolo, Ercole Seccadenari, Zaccaria Zacchi da Volterra and sons, Giacomo Silla, Lazzaro Casario, Giacomo Francia, Girolamo da Treviso, Diego Sarti, Antonio Solosmeo, Alfonso Lombardi, Properzia de' Rossi, Francesco da Milano. Everything was recorded at the same resolution. The recording does not discriminate between the celebrities of the time and the skilled artisans who gererated most of the works of the Quattrocento. 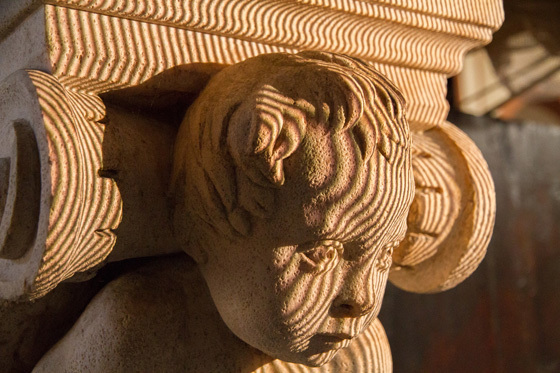 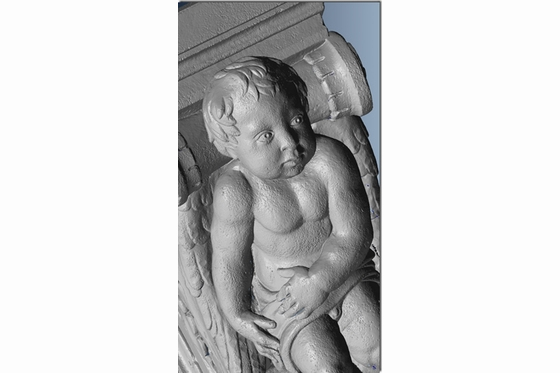 More than 20 carvers worked on the doors of the Basilica. The sculptural groups above each of the doors were carved between 1430-35 by Jacopo della Quercia (main door - the Virgin Mary and Bambino and the patron saint of the city, San Petronio.), Domenico di Varignana (Sant'Ambrogio) Alfonso Lombardi (left door, the “resurrection” of Christ) Francesco da Milano (two soldiers on left and right side of Christ) Amico Aspertini (central group on the right door depicting the Deposition of Christ with San Giuseppe d'Arimatea,) Nicola Tribolo (Madonna on the left) Ercole Seccadenari(San Giovanni on the right). 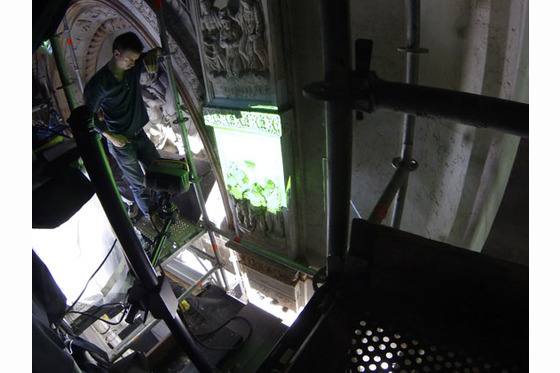 Factum Arte's recording work lasted over 6 months and involved a group of 10 people working in two shifts from late afternoon till early morning. Using 4 different 3D scanning systems: 3 white light scanners and a medium-range laser scanner. Since the recording has been completed a team of 3 people have worked on the post processing in Factum Arte’s workshops in Madrid. The data has been cleaned, merged, aligned, rendered and 3D printed.

A great deal of attention was paid to ensure every action is clear and that both processed and raw data are clearly identified. All the holes in the data were reconstructed using the photographic recording as a guide – this is essential if the information is useful for printing or making facsimiles. In the rendering of the data the aim was to produce an aesthetically pleasing surface that could encourage deep study. 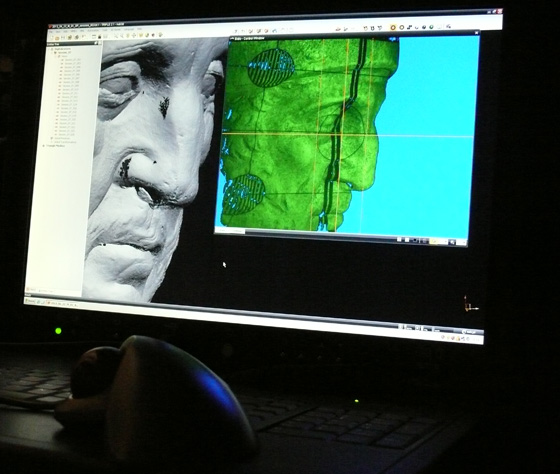 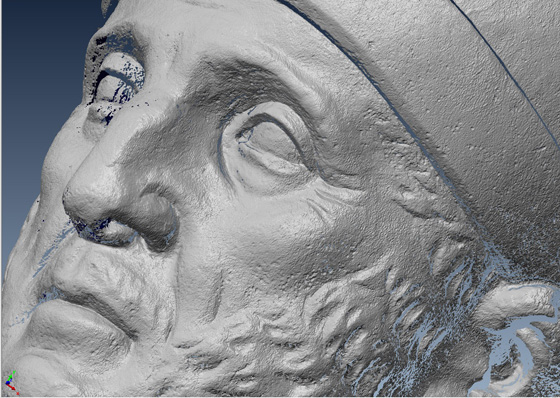 Scanning of the face of San Petronio scanned at the resolution of 75 microns.

Approximately 70% of the recording process was made using Sidio Pro 3D scanner but in some places that we couldn't reach due to the limitations of the recording equipment, other systems were used to extract 3D information, such as a Breuckmann Smart Scann 3D and a DAVID SLS-1. Thanks to the small size of the latter it was possible to reach even the back part of the statues in the niches. The data was then processed and integrated with the one of the SIDIO and Breuckman thanks to a workflow developed by Factum Arte's team. Every system has its strengths and weaknesses. No recording system can do everything. The NUB 3D Sidio was selected as the main recording system as it is a proven metrological device that can carry out non-contact recording and over the past 8 years it has been used extensively and successfully by the team at Factum Arte (often working in difficult conditions).

To keep a track of the recorded area and also for detailed documentation an intense photographic record was carried out at the same time by Greg Dupond and Gabriel Scarpa. Each detail of the sculpture was photographed from different angles recording all the hidden parts that were not accessible to the scanner. 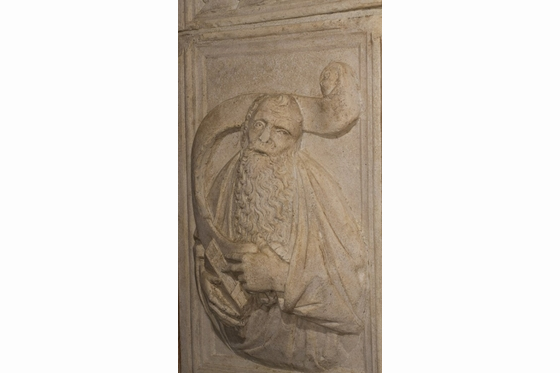 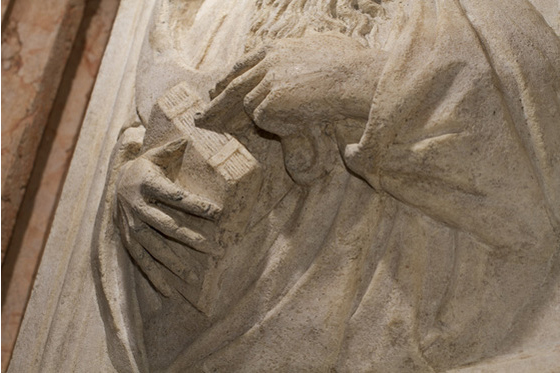 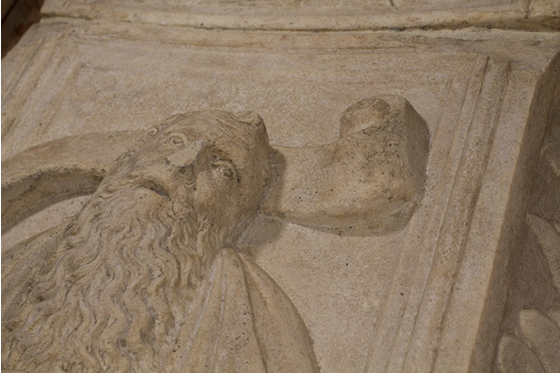 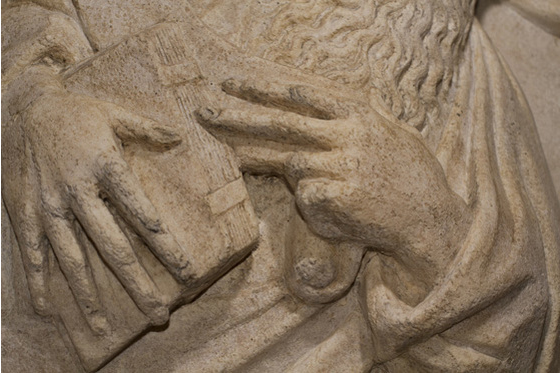 In addition Factum Arte used FARO Focus X330 system as a complimentary tool to produce a ¨digital canvas¨ for the high resolution scans and 3D models. Collaborating with ScanLAB, London we were able to record the whole facade and accurately position the high-resolution scans in their correct place. The result is a digital 3D model of the three doors of the façade of San Petronio. 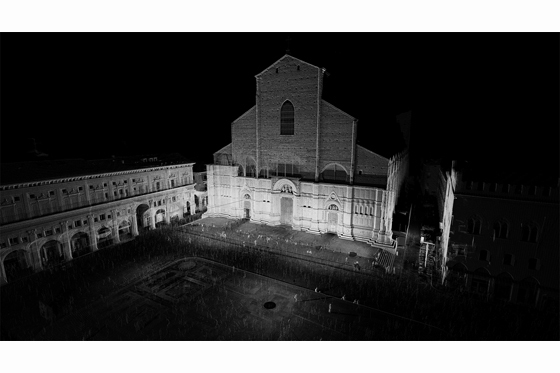 A visualization of part of the Piazza Maggiore and the facade of the church recorded using the data collected by FARO Focus X130. 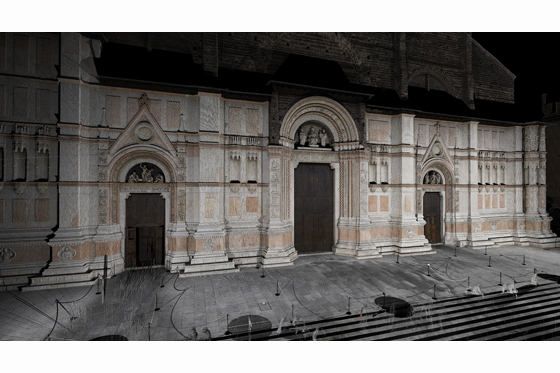 The ¨digital canvas¨ created by ScanLAB with colour information and accurate locations of the tiles and the statues. 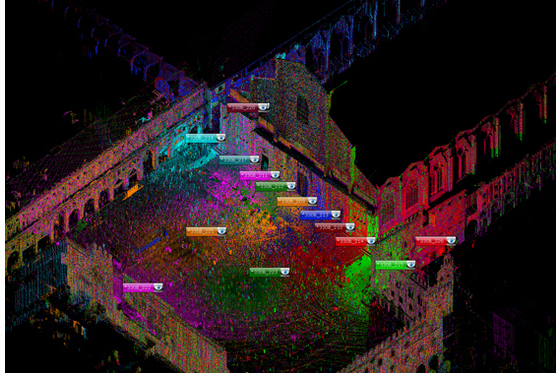 A map illustrating the different positions of the scanner.

The post-processing of the 3D data has been carried out both in Factum Arte’s Madrid and Bologna offices. It was mainly a question of aligning the many ‘image captures’ in a three dimensional space – this was done using the software PolyWorks, which allowed the user to align the data captured and generate a final meshed file in a standard STL format. PolyWorks has proven to be one of the most powerful tools capable of generating high resolution meshes, a standard STL file for each piece of sculpture would be around 4 gb. 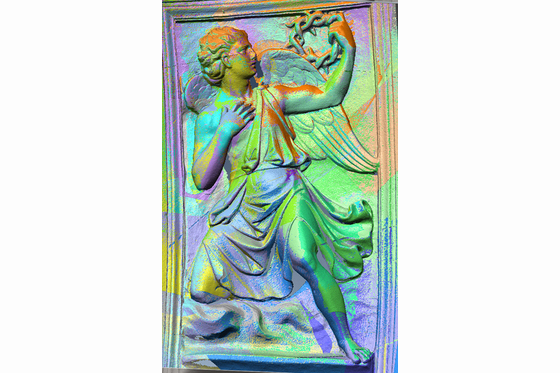 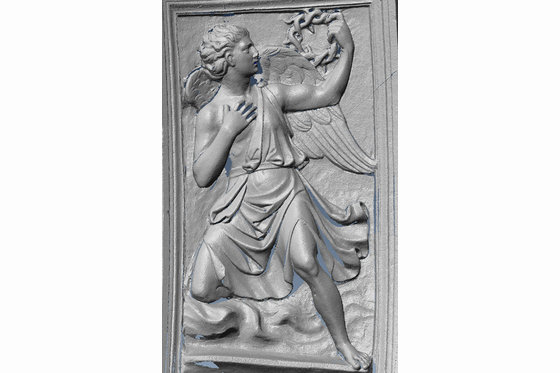 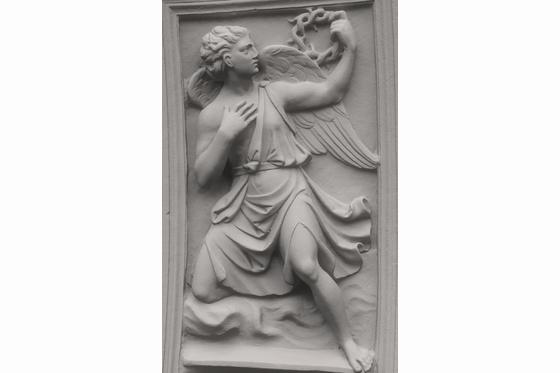 Rendering of the same figure

Point cloud: the direct output of the scanner. The positioned points in the three-dimensional space coincide with the scanned areas. 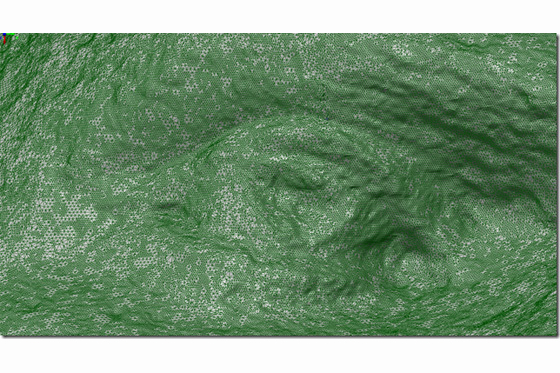 Mesh: The mesh is created by an algorithm using a triangulation system based on the point cloud. 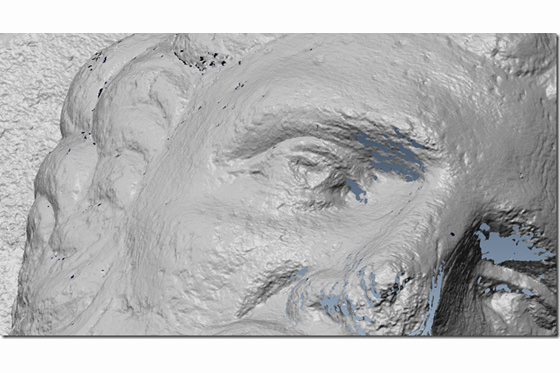 Some parts of the surface are invisible to the scanner and therefore in the scans some blanks/gaps remain while recreating the 3D model during the first part of the process. 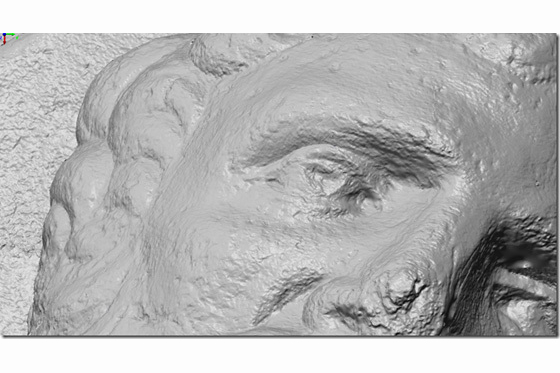 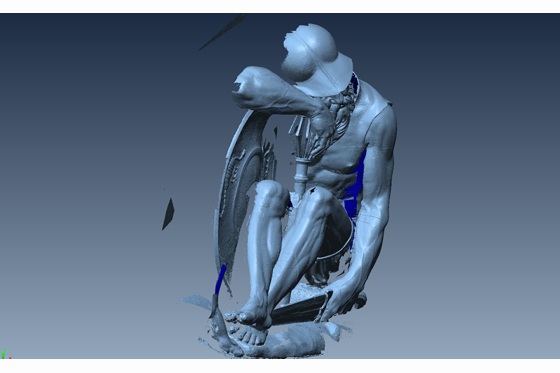 As a last part of the project Factum Arte has prototyped the reliefs and the statues of the Central Door in scale 1:5 using the 3D models from the data collected. With the help of a sintering 3D printer we created the physical models in white polyamide reaching a resolution of 100 microns. The 3D prints of the three statues of the central door: San Ambrosio, Madonna, San Petronio. The future applications of this data will be decided by the Basilica of San Petronio, the Superintendent and others with the responsibility to safeguard Bologna's rich heritage. But the important fact is that a high resolution archive of the 3 main doors now exists and it is an accurate record of the condition of the sculptures in 2013. It will be essential to monitor the condition of the original works and it will be used to help preserve integrity of the façade of the Basilica.