Factum Foundation´s Pedro Miró and Otto Lowe recorded the statue of Idrimi, a 3,500 year-old refugee from Aleppo (Syria), over two consecutive days at the British Museum. Idrimi fled Aleppo as a young man, and after seven years in exile, became King of the ancient city of Alalakh, in Southern Turkey. King Idrimi made a statue of himself, inscribed with 104 lines of cuneiform narrating his biography as well as a curse to anyone who might attempt to destroy the statue. 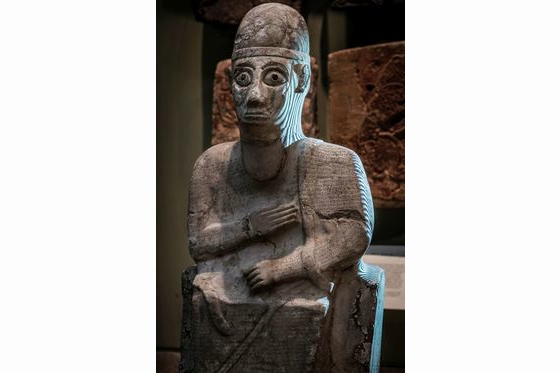 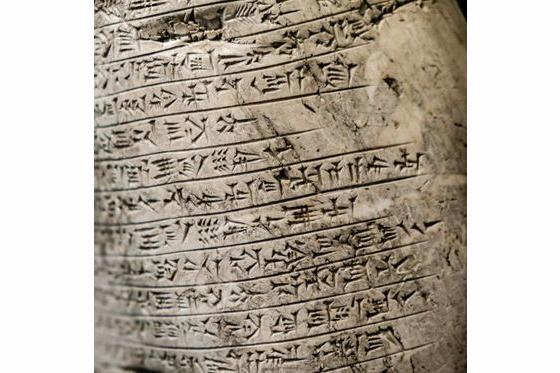 Carved in cuneiform, the statue was incribed with Idridmi´s biography in the 16th century BC 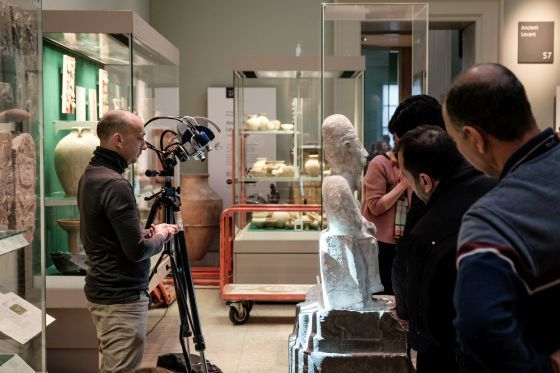 Recording the statue of King Idrimi at the British Museum

The statue was recorded using two different recording systems to complement the quality of each dataset. The results of the data gathered can be seen in the following 3D model :

Idrimi was first scanend with the Breuckmann smartSCAN 3D, a white light scanner, which records at sub-millimeter resolution. This system projects light patterns onto the surface of an object as two cameras capture and extract 3D information from their projection. The object´s surface is scanned in sections, which are then merged together using OPTOCAT software. As it scans, the system tracks all recording distances, maintaining the scale of the information gathered. 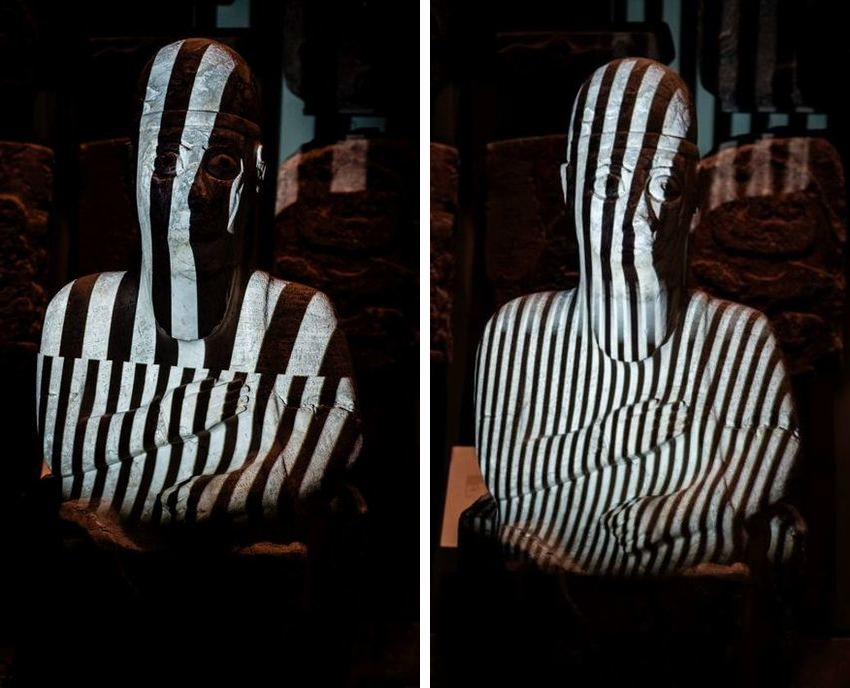 Scanning the statue of Idrimi with the Breuckmann smartSCAN 3D

The statue of Idrimi was also recorded with close-range photogrammetry, a technique that extracts 3D surface information from an object by taking multiple photographs of the object from different angles. A total of 2500 photographs, each weighing about 8000 x 7000 pixels, were taken with a Canon 5DSR camera to record Idrimi. The quality of both the photogrammetric data and the resulting 3D model depend on the recording proximity to the object, as well as on the level of definition of the captured images. Unlike scanning systems, photogrammetry does not measure scale- the objects must therefore be recorded with known physical reference (i.e. a ruler). 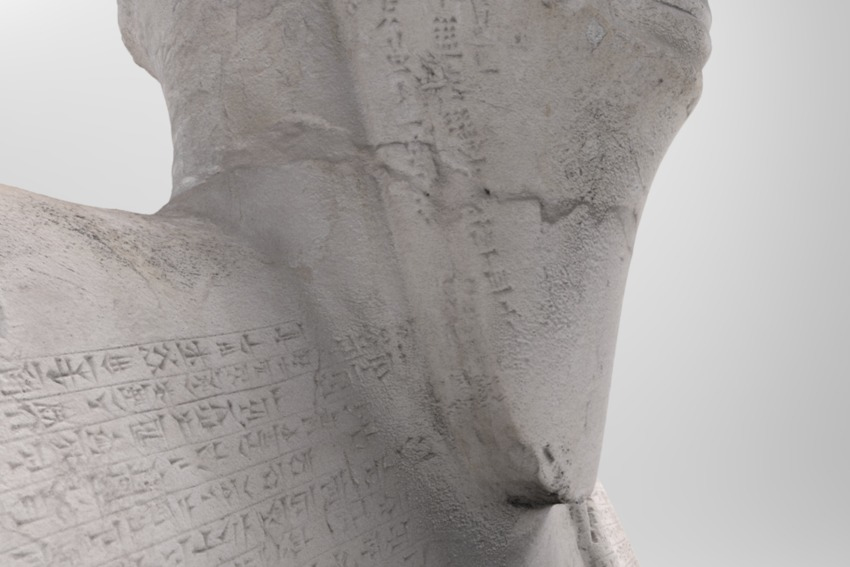 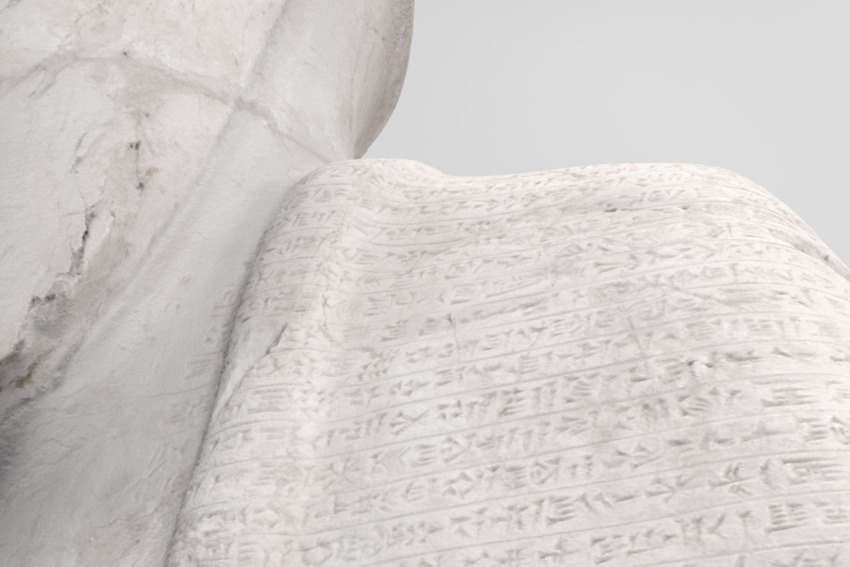 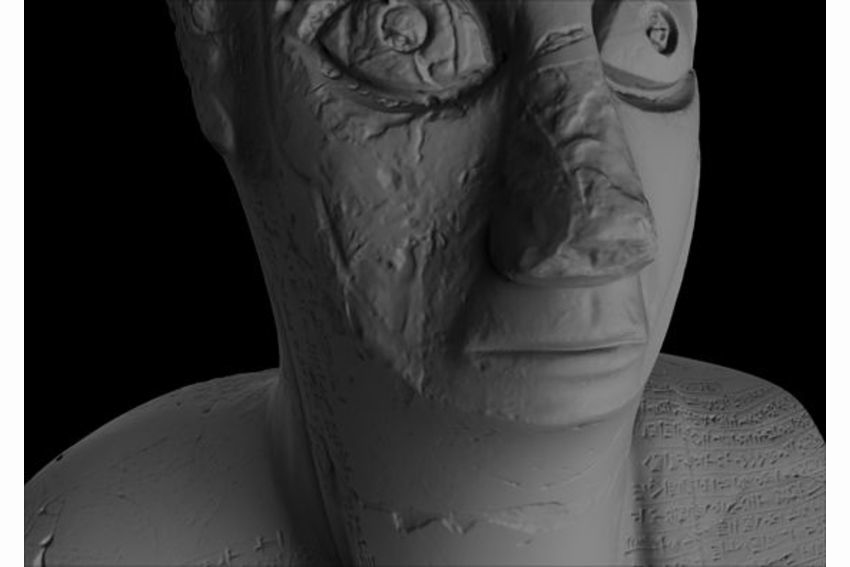 Comparison of two recording techniques: 3D model of the top section of the Idrimi sculpture recorded with the Breuckmann Smartscan 3D 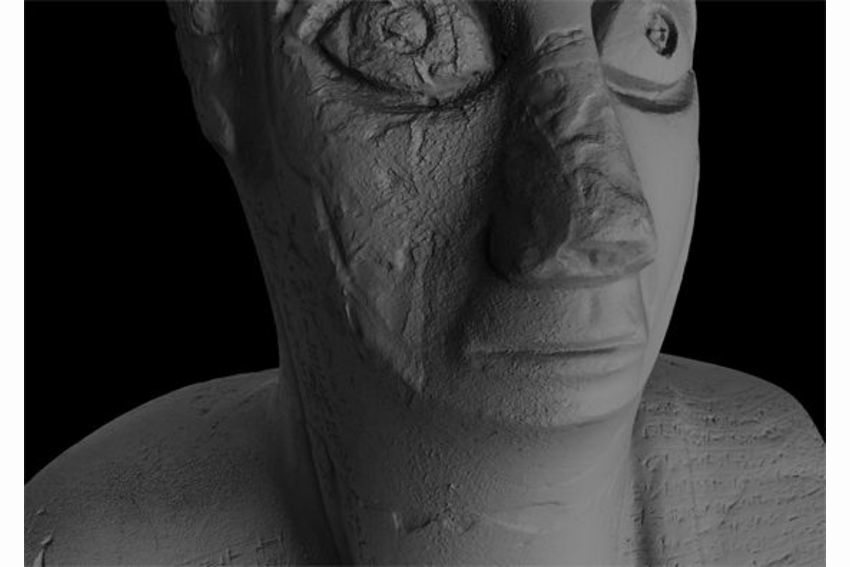 The model obtained with photogrammetry is as accurate as the structured light model up to 200 microns, meaning that the maximum both models diverge is 0.2 mm. On screen both datasets appear similar but if routed the data recorded nearest to the object is more precise. In certain situations, cultural objects can be recorded with photogrammetry at very close-range producing highly accurate 3D models and physical objects. This reflects the extent to which photogrammetric processing software has increased in its capacity to process thousands of photographs in just a few hours, becoming a viable alternative to more elaborate and expensive scanning systems. 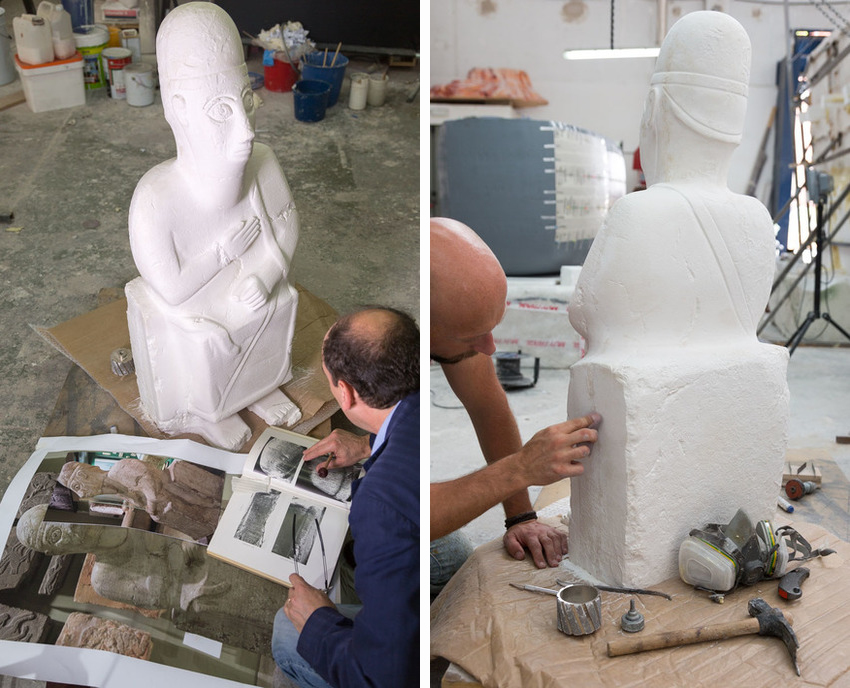 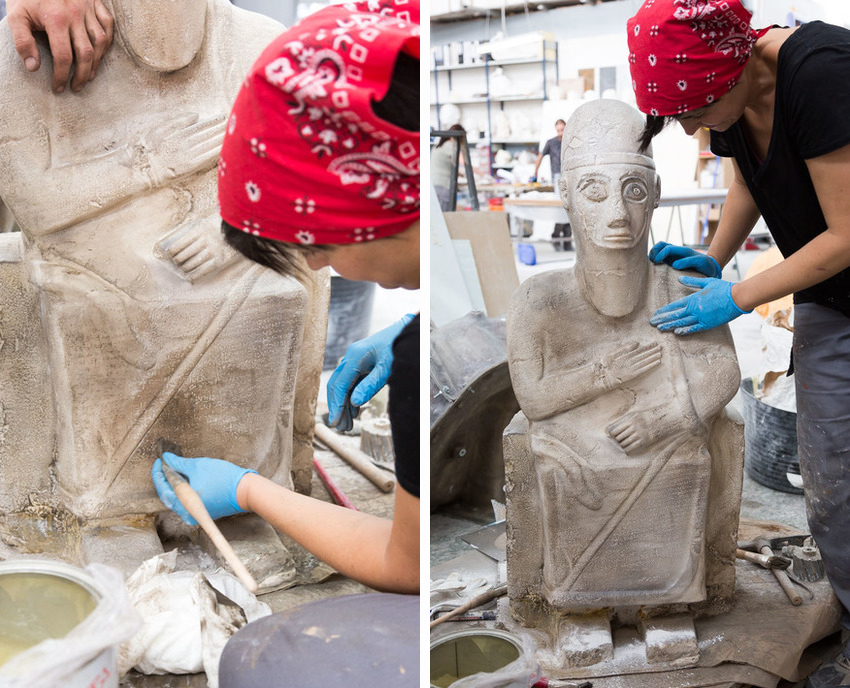 Factum Foundation donated a facsimile of the statue of Idrimi to UK charity Making Light, and will be part of its exhibition Syria Past and Present. Making Light is dedicated to sharing stories about Syrian culture, heritage and people. 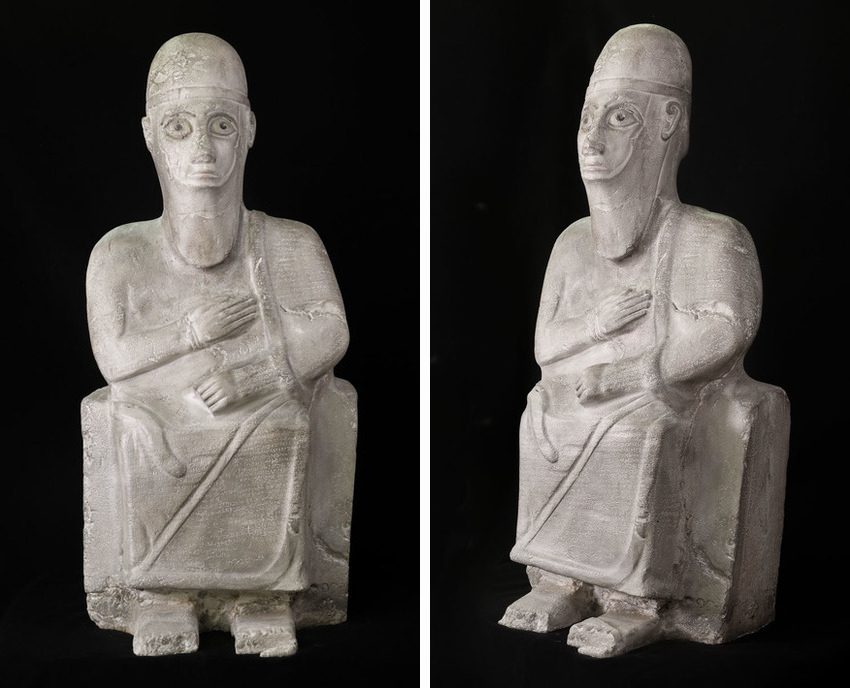 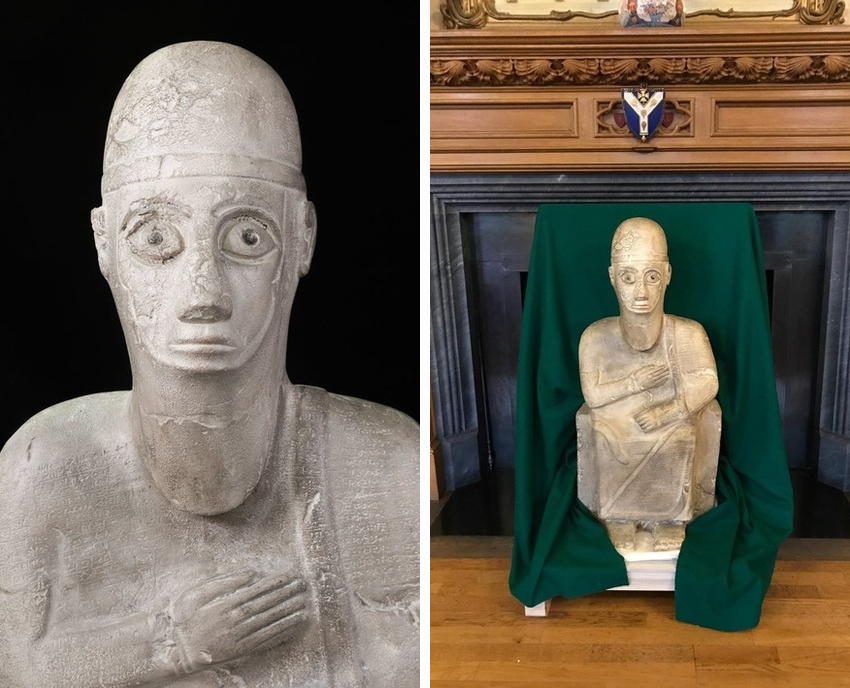