The recreation of the Borgherini Chapel 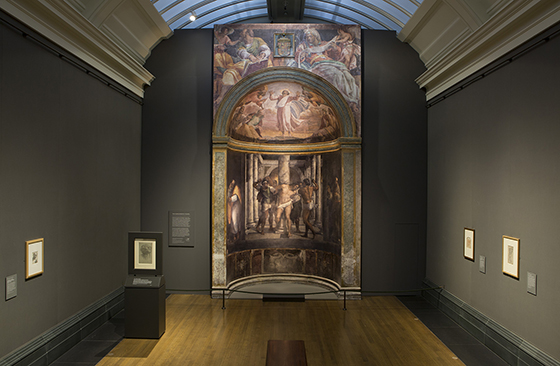 The re-creation of the Borgherini Chapel at the National Gallery

In October 2016, two specialists from Factum Arte, Gabriel Scarpa and Guendalina Damone, spent four days at the San Pietro in Montorio convent in Rome recording the Borgherini Chapel. The chapel, completed in mid-16th C. by Michelangelo Buonarroti and Sebastiano del Piombo, was recorded using composite colour photography and photogrammetry. Recording was carried-out using a Canon 5DSR, alternating between a Sigma 50mm lens for heights at eye-level or below, and a Canon 300mm f2.8 lens for higher areas.

Over 2,400 overlapping images were taken at 300 DPI of the curved wall depicting the Flagellation with St Peter and St Francis (1524), the half-domed vault representing the Transfiguration (1516), the lunettes with St Matthew and St Isaiah, and the two columns which stand on either side of these masterpieces. 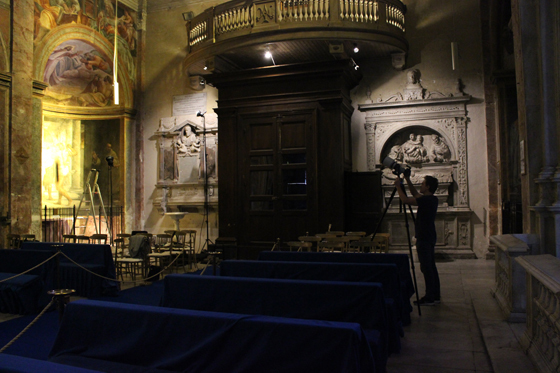 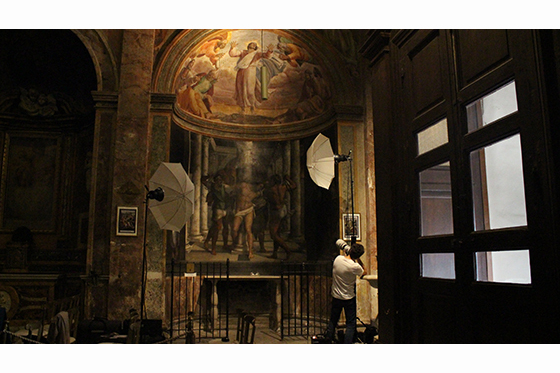 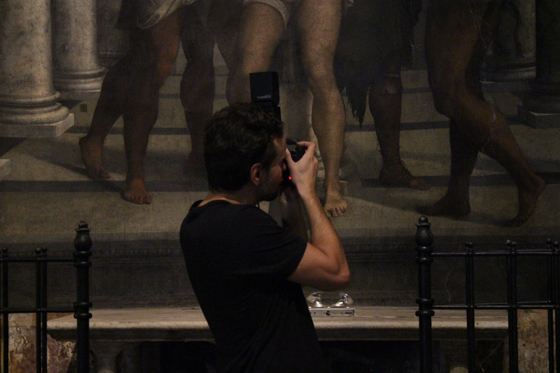 The photographs were processed in two different ways at the Factum Arte workshops in Madrid to obtain different information about volume, dimensions and colour. A photogrammetry software extracted data from photographs to create a highly accurate 3D digital model of the full chapel. Vast, composite images, known as giga pixel images, were formed by stitching together photographs at sub-pixel level, for data on the dimensions and colour. Irregularities in tone and exposure on both datasets were corrected using colour notes in addition to grayscale and colour charts. 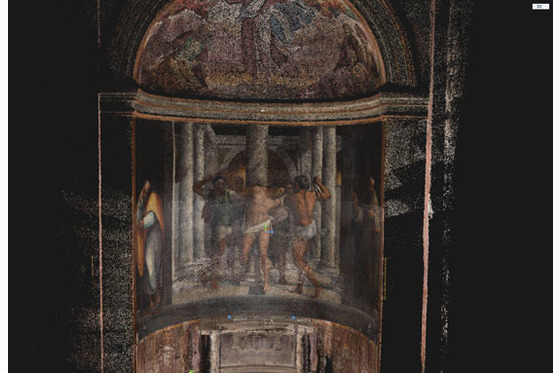 The construction of the physical chapel demanded a combination of ancient construction techniques and artisanal skills. The plaster was formed using the same techniques used in 16th C. Italy. Profiles were taken from the original plaster work to re-form the plaster mouldings and dome trim. The structure of the chapel was recreated using a lightweight steel construction clad in plywood, mounted on aluminum panels, topped by a fibre glass dome. 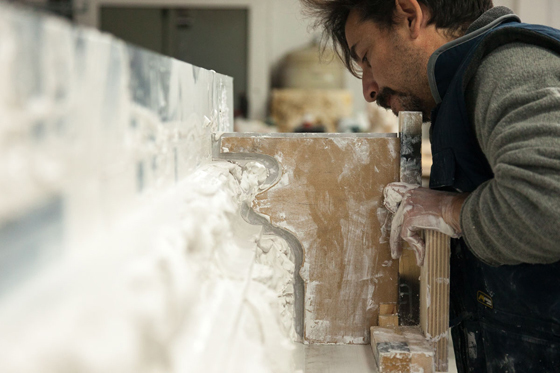 Profiles were taken from the original plaster - the facsimile was made using the same plaster forming techniques used in 16th C. Italy 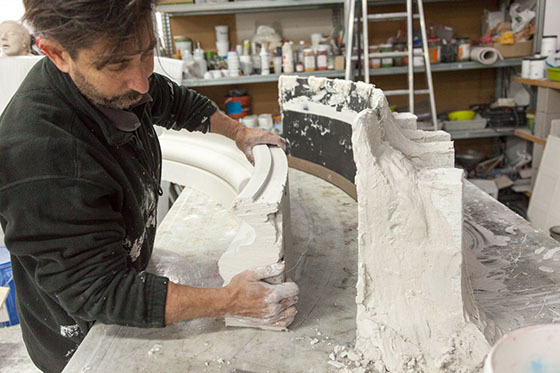 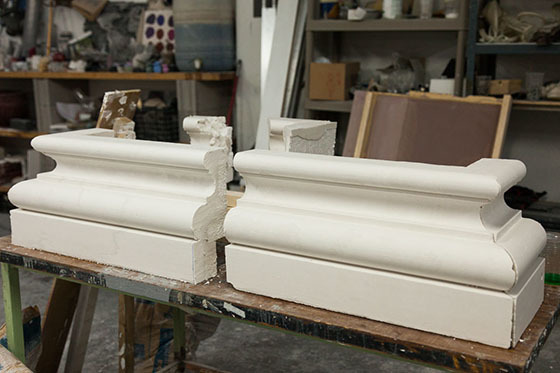 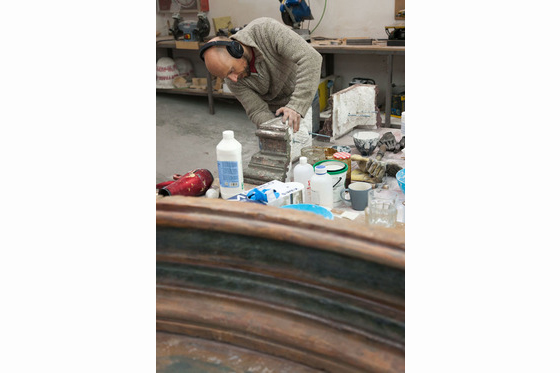 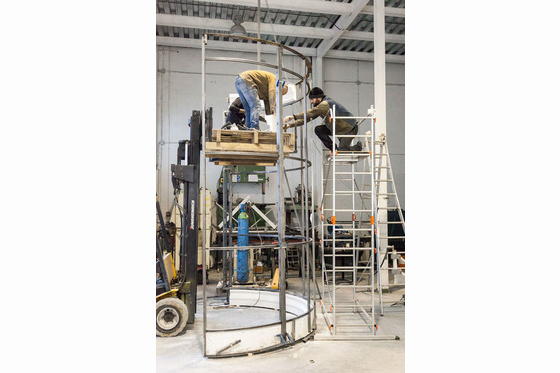 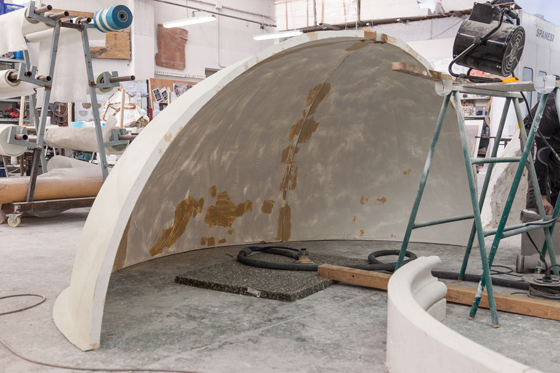 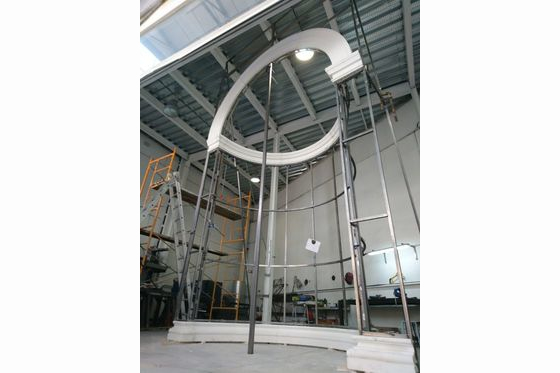 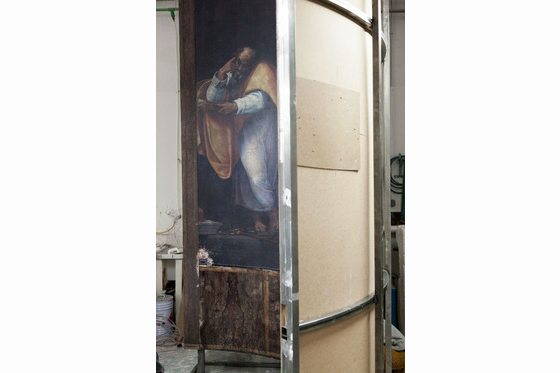 The process of printing the images of Borgherini´s curved and domed surfaces was similar to the production of a traditional globe. Before printing, the images were ‘flattened’ using 3D Studio Max software, then sectioned off. The representation of the Transfiguration on the inside of the dome was particularly challenging because the dome is not a true section of a sphere. The correct projection is a mix of calculation and trial and error. 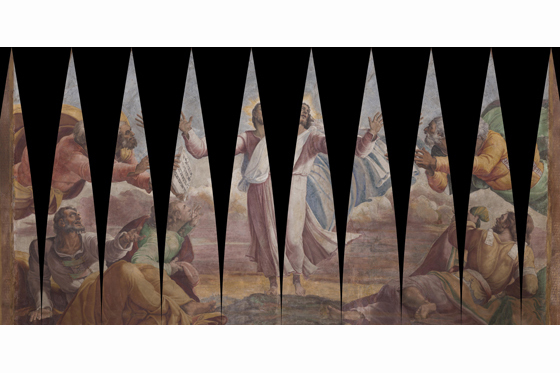 Print of the Borgherini Chapel dome inspired by gore maps The central panel of the Borgherini Chapel, the Flagellation with St Peter and St Francis, was printed in a single piece of canvas with Factum Arte´s flatbed inkjet printer that allows for the support to be wrapped around the bed. The panel was printed in sections with each section joining perfectly to the next along features in the image. 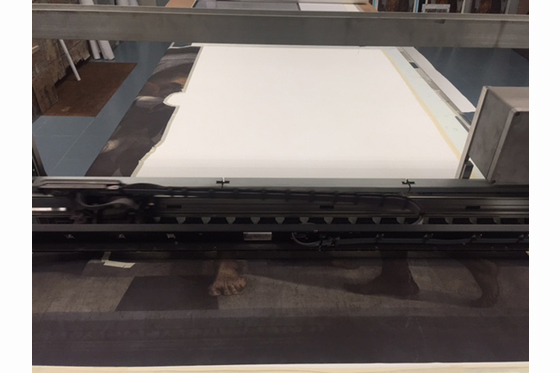 Printing sections of the central panel of the Borgherini Chapel 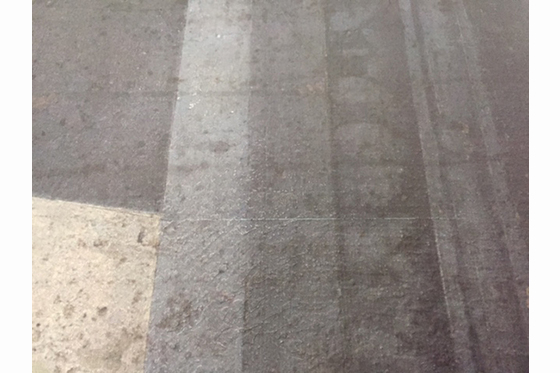 The printer prints in sections without any visible joins

At 20 ft. tall and 13 ft. wide, Factum Foundation´s recreation of the Borgherini Chapel, is about 90% of the original´s size because anything bigger would not fit the gallery space. The Chapel installed at the National Gallery in London 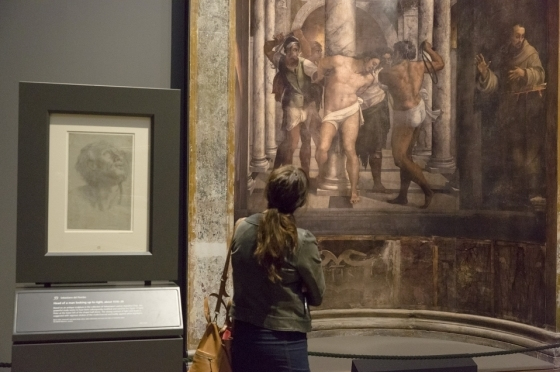 The recreation of the Chapel was sent to the National Gallery in London upon completion on February 10th 2017. It was on display as part of the exhibition Michelangelo and Sebastiano (15 March - 25 June 2017).