The Eastern Ennedi is an ancient landscape hundreds of millions of years old. The Tassili, a geological term for rock towers, or Fingers, are sedimentary continental sandstone outcrops carved by the wind. Approximately 10,000 years ago the Sahara was far more temperate and the Ennedi was full of life. When the Sahara began to ‘dry up’ the mountains in the east of the Ennedi remained more resistant to the climate change and life continued here for longer.

The Trust for African Rock Art, in partnership with Factum Foundation, completed a multi-faceted research project in the region. The project comprised of high-resolution photography, Infra-red imaging, Photogrammetry and geo-locating of both known and newly discovered sites. On this trip seven discoveries were made and documented. Over half of the data has been processed, please find results further down the page. This will not only help us understand the sites but it will also provide tools for future research in the area. Rock Carvings and paintings in Northern Chad are prolific and relatively little known. They range across a vast and mostly uninhabited region. During this trip we covered just a few of the important sites in a small part of the east of the Ennedi Massif in the southern Sahara. A vast area remains unexplored and unmapped and there has been almost no archaeology in the region Dating the sites is complicated and in need of serious study.

The collaboration for this project is a part of a longer term, documentation process and community engagement initiative by TARA in the region. Factum’s involvement was funded by donations by Paula and Jim Crown and Factum Arte. 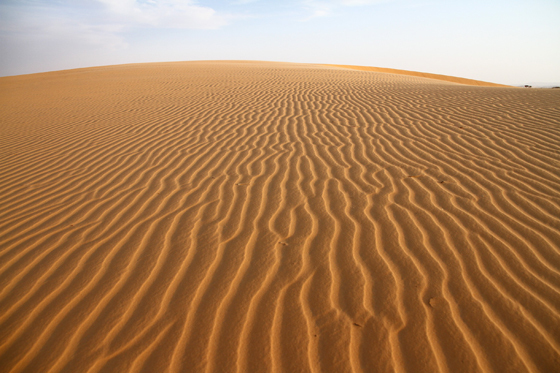 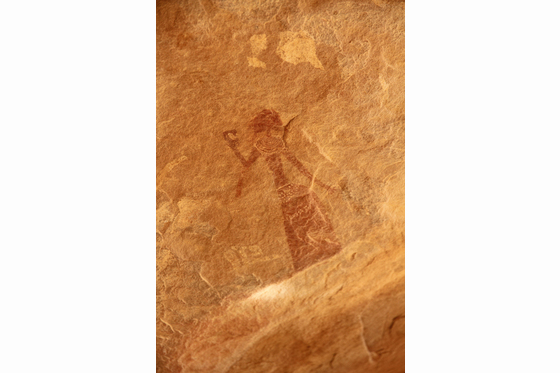 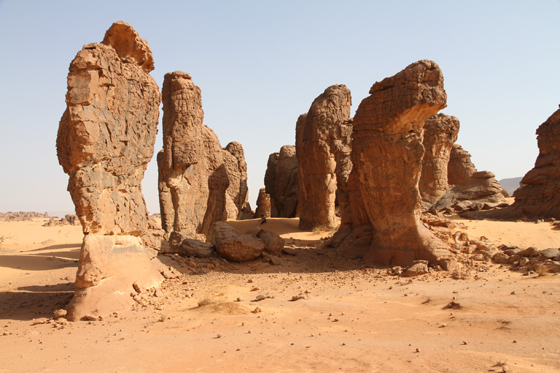 Devonian period Tassili or "Fingers" Sedimentary Sandstone formations carved by the wind over millions of years. 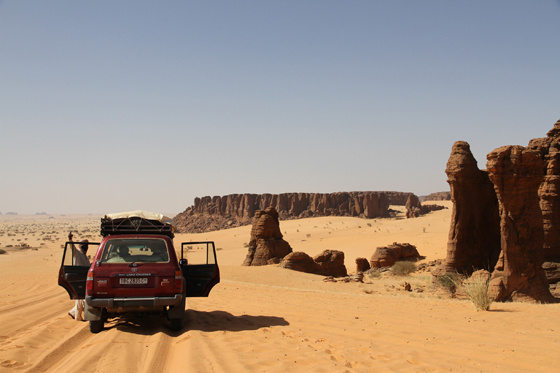 The lead Land cruiser with a view of the entry to Archei region.

Search and Research – Documentation and mapping of new and existing sites in multiple formats including Photography, 3D photogrammetry, infra-Red and GPS. A total of 11 sites across the east of the Ennedi were recorded. We hope to consolidate GPS co-ordinates and Images taken by TARA on previous research trips in order to begin to map the known sites of the Ennedi. This part of the project can grow with new expeditions and through sharing data between TARA, Pier Paolo Rossi from the Société de Voyages Sahariens (SVS), and Factum Foundation. Pier Paolo Rossi is about to publish a book on rock art of the Ennedi. A pilot mapping project for Niola Doa currently is underway.

Raising awareness - Highlighting the problems of protecting and preserving rock carvings and paintings in Chad through documentation of sites where deterioration has occurred. Rock art in Chad can be well preserved and in good condition, but wind erosion and vandalism have caused serious damage. Changes in temperature and humidity cause some of the Sandstone walls to rapidly exfoliate. The data recorded provides the opportunity to make detailed condition reports from one visit to the next. There are some images from the 1950s and previous SVS and TARA documentation projects, as well as other SVS-organized trips that can be incorporated into the 'preservation' archive. We plan to produce a film documenting the project and showcasing the data for a bid for funding and raising awareness with an international audience.

Dissemination of the data - Developing and processing recorded data for exhibition display is one way of communicating the importance of these carvings and paintings. We recorded four of the so-called ‘Big Ladies’ in 3D and made multiple recordings with IR and high-resolution panoramic photography across all the sites. A range of outputs can be developed. Enhanced visualisations of worn artwork and 3D renders can be useful for academic study. 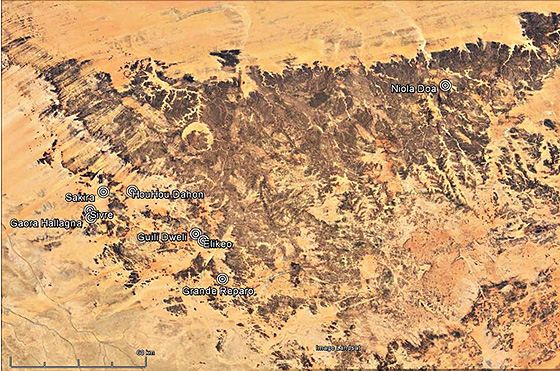 Niola Doa is North East of Fada (only town in the Ennedi Region) and the most remote location that we visited. It has a wealth of rock art ranging from the oldest known period in the Sahara for rock art (8000 BP), to more recent eras (2000 BP). It is a one and a half days drive from Fada. There is so much art here that new discoveries were found each day we worked on the site. We mainly stayed within a 2 km² location, documenting new and existing sites in 2D, 3D, IR and with GPS. There is a strong case to commit to a further project to focus on Archaeology in Niola Doa in order to map and search for new sites. The main sites that have been discovered in this region are mainly due to the proximity to roads. Pier Paolo Rossi made a 10-day trip last year and discovered 50 new sites. It is almost certain that a focused expedition from Fada through the mountains to Niola Doa would reveal a great deal more. In the 2 days we spent in Niola Doa we discovered 2 more ‘big lady’ carvings and an Archaic cave painting site.

Multi-layered viewers for the French, Italian and West panel has been developed, you can find them here. 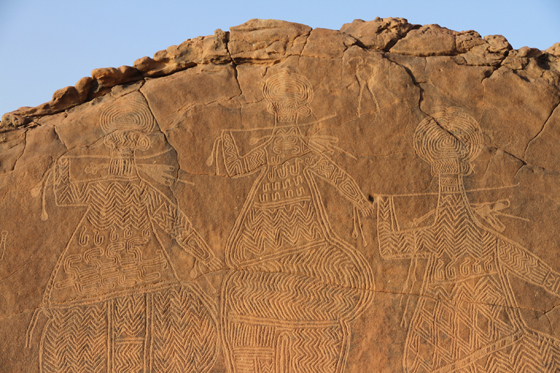 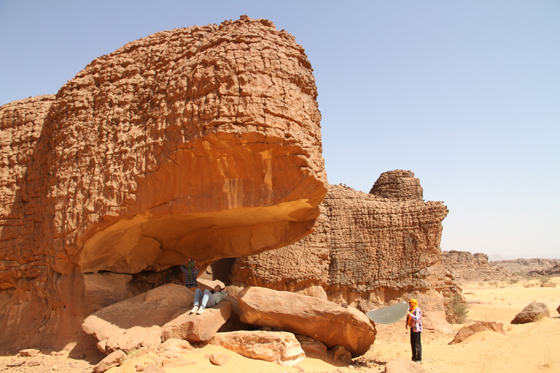 A major objective was to look for earlier (archaic period) sites dating back to between 4000 and 8000 BP, in that very few sites from this early period have yet been found in the Ennedi. 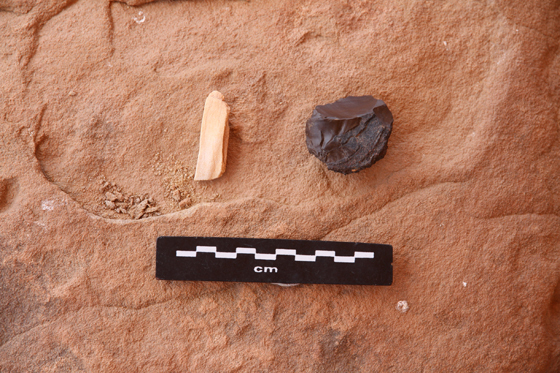 Tools of the artists found lying where they were left on the cave floor 1000s of years ago. 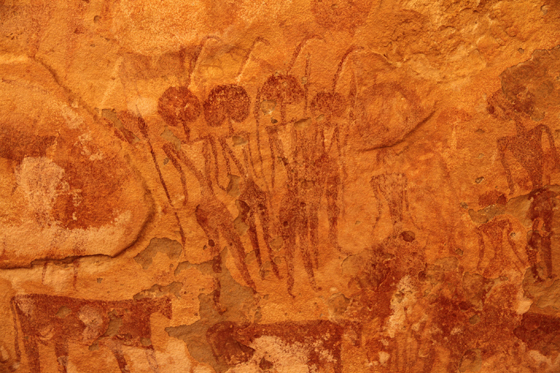 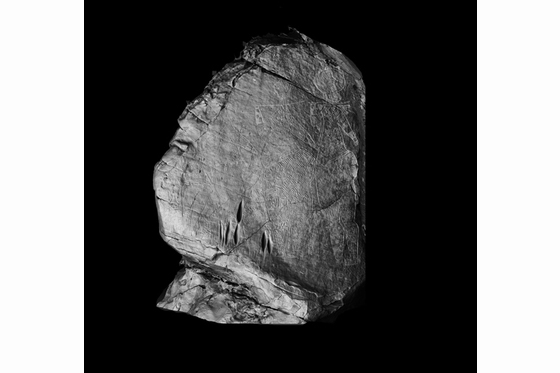 A 3D render of the Italian Panel

Archei is South-East of Fada and has some of the most dramatic scenery in the Ennedi. It is also reputedly the centre for Nomadic life in the Ennedi on account of an ancient waterhole, which has a dwindling population of crocodiles that have survived from a more temperate time, long ago. We recorded multiple sites, and even though this area is quite well known and explored, we still recorded paintings that dated back to the earliest period of painted art, perhaps over 8000 years. Most of the work was to re-document known sites to make condition reports comparing them with previous research. Archei sites show the greatest degree of human risk to the rock art as it comes more into contact with the local nomadic tribes. 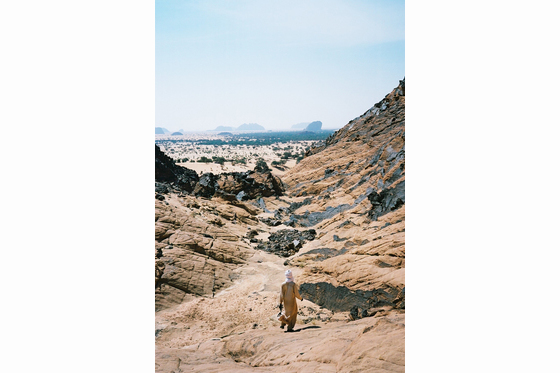 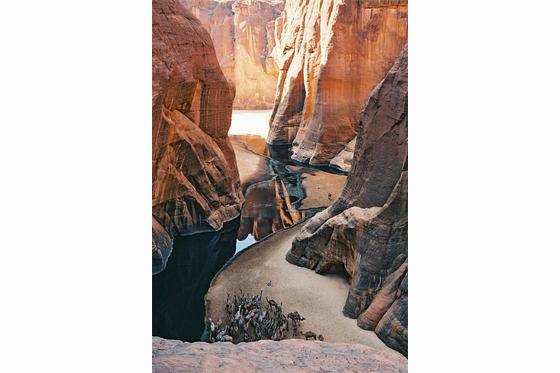 Every morning for thousands of years camels are herded into this ancient reservoir. 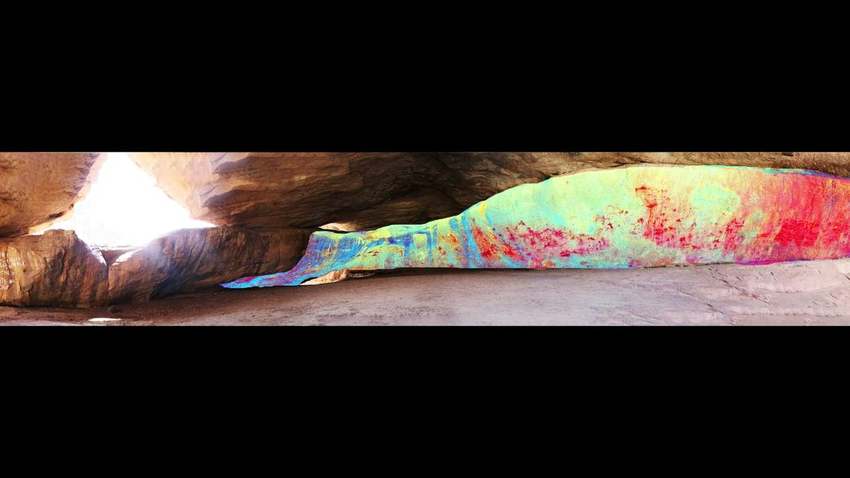 Manda Guili is in the region of Archei and is one of the finest and most well-preserved rock art sites in the Ennedi. 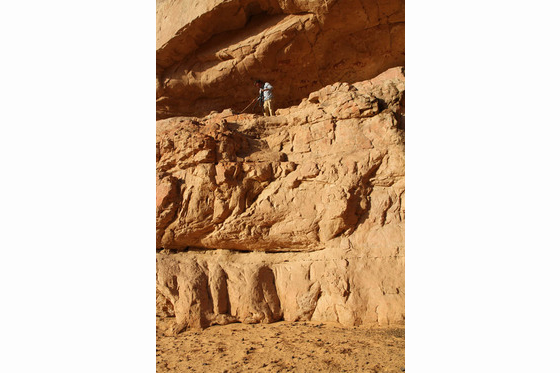 Alex Peck from the Factum Foundation recording the exceptional art work at Manda Guili. This site requires some clambering to reach. 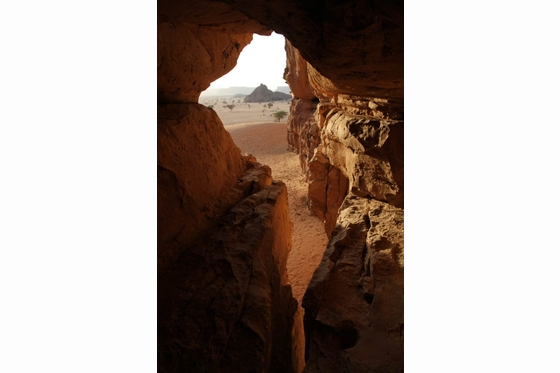 A view from the inside of the secondary cave at Manda Guili. 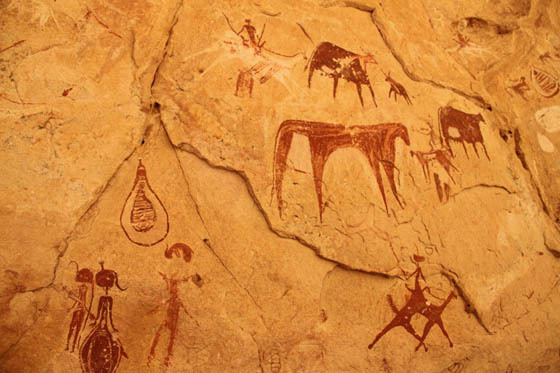 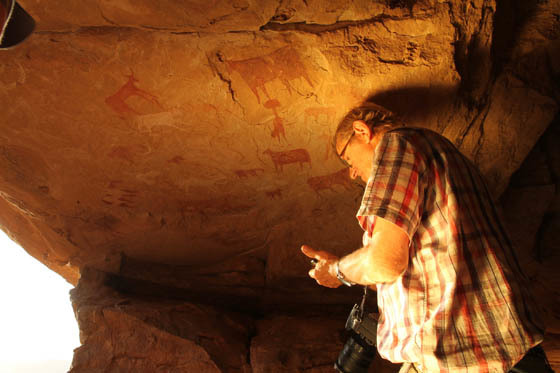 David Coulson the chairman of TARA, studying the pastoral art in the secondary cave.

A small site near Archei with depictions of Ostriches with recent graffiti on the artwork as well as three heads of ancient painted figures from the archaic period.
High-resolution images of this site are available here.

On the route to Niola Doa from Fada, there is an ancient hill top settlement. Reputedly used until quite recently as a refuge from slave hunters. We recorded a 3m long Archaic painting of a cow from the early pastoral period, very worn but uniquely large.

A 3m archaic painting of a cow, a unique size for a piece from this time.

A huge decaying mountainside, close to Fada, this site is rapidly deteriorating due to the softness of the stone. We recorded multiple new sites discovered by our guide, Ali Jimmy, and recorded the ‘Phantoms’ a ghostly archaic white painted couple, an image called ‘the Harpist’ was also recorded here. There is evidence of wild donkeys living in the caves, the change in humidity that they bring accelerates the stone damage. There is a black mould over the ‘Harpist’. We now have the opportunity to compare the condition of the work with Gerard Bailloun’s work as well as previous TARA and SVS images.

A browser has been developed showing Anthropomorphic dancers, a site made famous for being on a French Chadien stamp. You can find the browser here. Other panels of this site can be viewed here.

The last site we visited was about one hour North West of Fada. We recorded very elegant and ancient white figures in a cave that had been overrun by wild donkeys. We also recorded a small cave with more pastoral art in IR, 3D and a low-resolution 3D framing of the cave interior.

A browser for white figures has been developed. Dstretch has proved an invaluable tool for enhancing worn reliefs, as seen with the Elikeo Dancers the figures are very faded. To view the browser, please click here.

This is a cave network in a range of sandstone outcrops. A large fish was discovered painted on one of the principal cave walls by David Coulson, the Director of TARA, and Pier Paolo Rossi. A sequence of alcoves with archaic paintings was recorded in 3D along with the whole cave at a lower resolution.

A large cave near to Archei Guelta, discovered by Sergio Scarpa. We recorded multiple panoramas and a 3D relief of a cow with other paintings superimposed over it. Browse through the high-resolution images here.

A small site near checkpoint 40, the site of a bloody battle between the Toubou and the Libyan army in the 1980s, that left behind many burnt out tanks and shells on the ground. The site was a small cave on a rocky outcrop. Unfortunately, it was also being used as a store by the local nomadic population.

A natural checkpoint in the desert, this site has been largely graffitied during the war against the Libyans in the 80s. The idea that graffiti attracts more graffiti can be seen with more recent dates added to the wall.

A huge 2km² sandstone outcrop, with a winding gallery of rock art paintings. This site was well documented in the 1950s by Gerard Bailloud. The terraces are spotted with cupules. A huge site, we recorded a few worn pieces in colour. We can hope to make a condition comparison with Bailloud’s expedition. 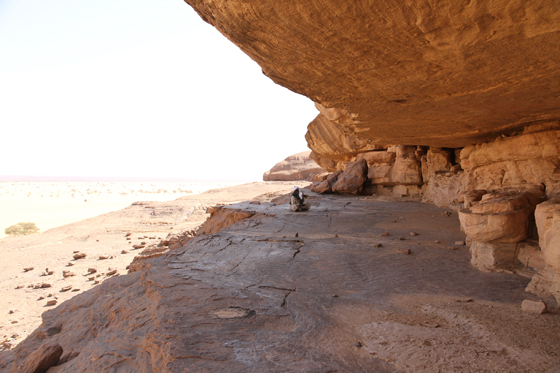 Sivre, a huge gallery of rock art, in what must have been an important meeting place 1000s of years ago 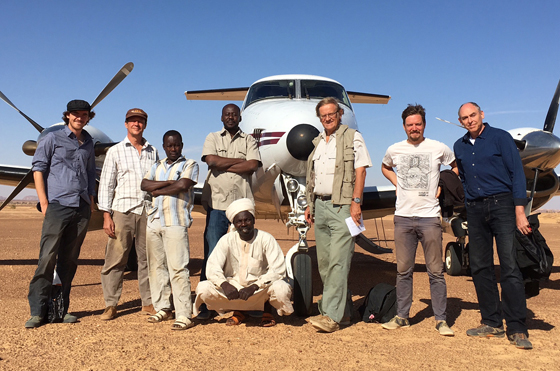