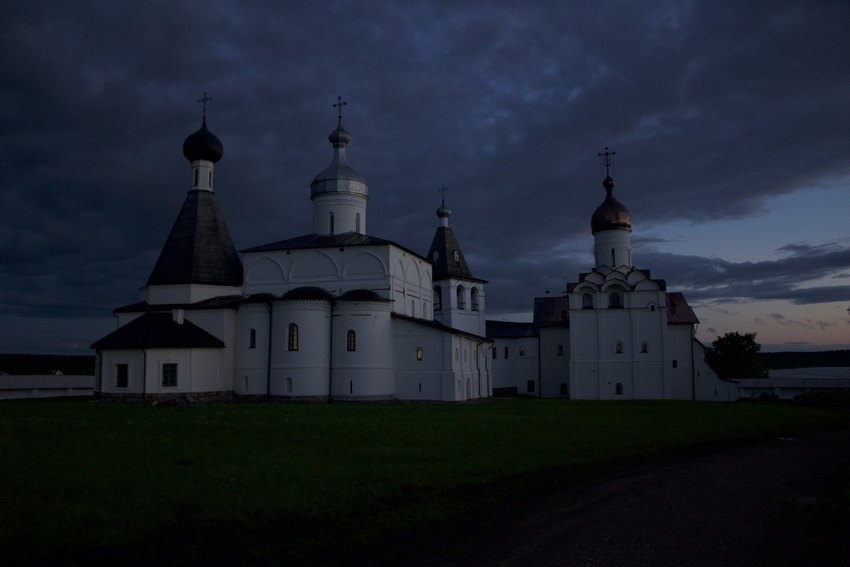 The Ferapontov Monastery is a UNESCO world heritage site in a remote area of the Vologda Oblast, dating to the end of the 15th century. It is in the small village of Ferapontov, on a hill overlooking two lakes, surrounded by extensive forests of pine and birch.  Within the monastery complex, the Cathedral of the Nativity of the Virgin (1492) stands out, in part for its delicate architecture, but also because the interior is decorated with frescoes by the great 15th century icon painter Dionisy.

It is one of few sites in Russia where frescoes from this period in Russian art have been preserved in a near-complete state. This was due to the changing fortunes of the monastery in the 16th-18th centuries (when there were no means to repaint) and to architectural modifications made to the church in this time, which protected the interior from the harsh climate of the Russian north. Although severely damaged in certain areas, the frescoes nevertheless create an intense feeling of light and space within the small Nativity Cathedral.

An inscription on the arch of the northern entrance to the cathedral dates the frescoes to 1502 and reveals that they were painted in a period of just thirty-four days. The inscription was only rediscovered at the beginning of the 20th century – it names Dionisy and his sons as the artists, information that allowed the monastery to become a state museum under the Soviet Union. Since the mid-20th century, a dedicated group of conservators have worked tirelessly to preserve this site, exploring its history, and looking into new, scientific methods of conservation. Currently, the interior of the church is kept under a strict climatic and dust-free regime where guided tours last on average only 15 minutes. 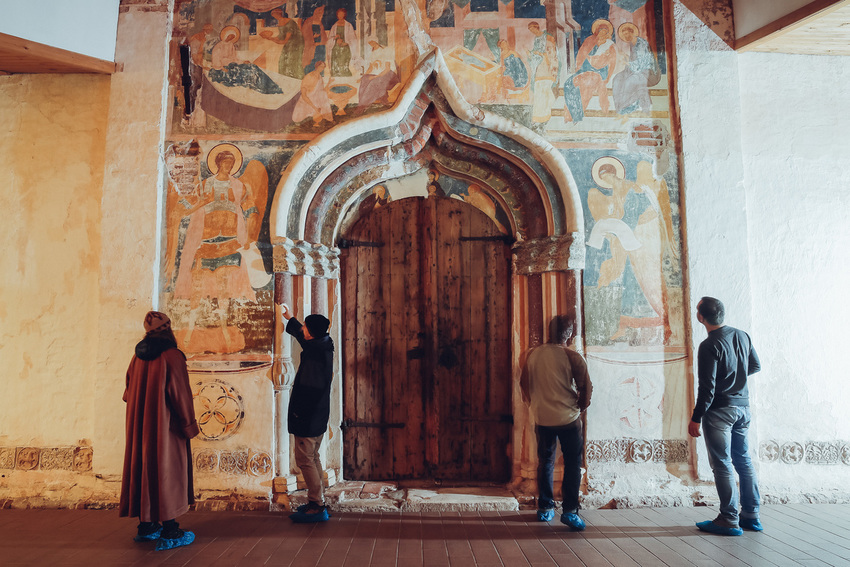 This project, a collaboration between the Peri Foundation and Factum Foundation, constitutes the first high-resolution digital colour recording of the entire church. Two photographers from Vologda, Fedor Komlev and Sasha Smirnova, were chosen by competition to take part in the recording. They joined Shamil Gadzhidadaev and Gennady Viktorov, Dagestani photographers who trained at Factum in April 2016, who, together with Factum Foundation photographers, took a leading role in the documentation. The data gathered in this project will provide a basis for further research into the evolving state of conservation of the Nativity Cathedral and allow members of the public to engage more closely with the frescoes.

A 3-day pilot recording was carried out in October 2016. The main objective was to obtain a 3D model of the interior of the space using a Faro Focus 3D Scan X130 (a mid-range LiDAR scanner). The model, which has low-resolution colour, was used in planning the full-scale recording and will be necessary when processing colour data. 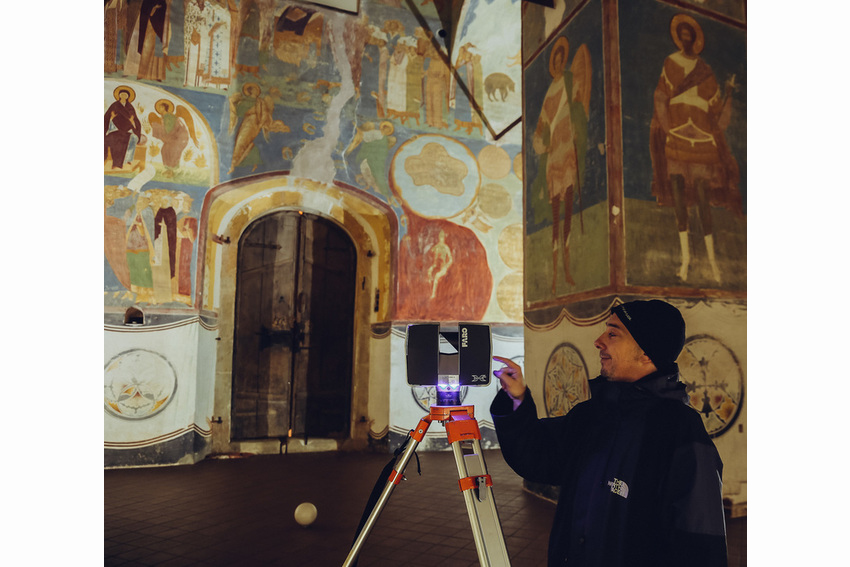 Pedro Miro from Factum Foundation setting up the FARO scanner 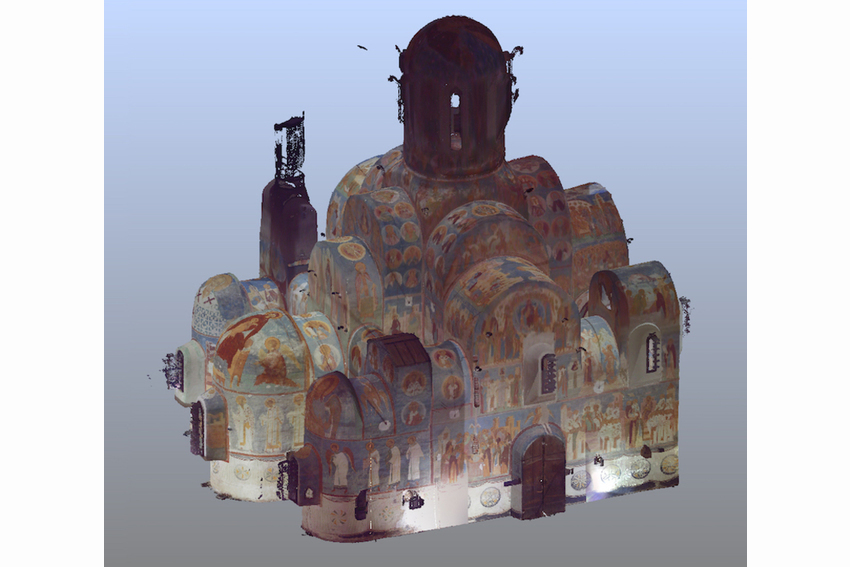 The pilot project also served to test the equipment used for the panoramic photography capture of colour data. This is a method which involves taking high-resolution images of a surface from a single, static point and merging them using dedicated image-stitching software such as PTGui. The complex geometries of the space, particularly the vaulted ceilings and cupola, were found to pose difficulties rarely encountered by Factum in past projects. As such, the pilot served mainly to emphasise the need for flexibility with equipment. For example, five different lenses (focal lengths from 600-50mm) and various methods of lighting the frescoes were available for the full-scale project in 2017, ensuring that the team were ready for almost any eventuality.

Photogrammetry was tested as a potential method for recording 3D and colour information in the interior of the Nativity cathedral. Two medallions from the decorative band were photographed: the processed data showed that the white stucco – which had a glossy sheen in many areas – caused too much interference with the results.  Photogrammetry was also trialled as a potential method for digitising Dionisy's icons for the iconostasis, two of which remain at Ferapontov (the rest are in museums in Moscow and St. Petersburg). Results suggested that the golden paint was problematic: the photographs had glares and the 3D data was noisy. In 2017, the Lucida Laser Scanner was used to record these icons.

The entire painted surface of the church – over 300 square metres – was recorded using panoramic photography. In two months of work, more than 50,000 images of Dionisy’s frescoes were taken at Ferapontov and the final data will have resolutions between 254-700dpi. The images will be pre-processed to account for variations in light across the surface before stitching them together to create panoramas. The resulting image files will be geometrically rectified using orthophotos (uniform scale images that can be used to measure true distance) extracted from the mid-range LiDAR and photogrammetry data. If necessary, a panorama can be integrated with those surrounding it to produce seamless images of entire walls. Architectural features, including the decorative band of brickwork and ceramic tiles on the western portal, were captured in 3D using photogrammetry.

They team worked in the evenings from 5pm to 1am, after the monastery was closed to the public. Raised platforms were used to access the vaulted ceiling – these were placed such that the photographer stood in the centre of a vault to capture a panorama, approximately equidistant from each point in the sphere. The cupola was recorded over two days and photographers spent more than three hours at a time on a platform which, at a height of 11m, stood within the drum. The platform shook under the weight of the equipment but to work surrounded by Dionisy’s frescoes was a priviledged and unforgettable experience. 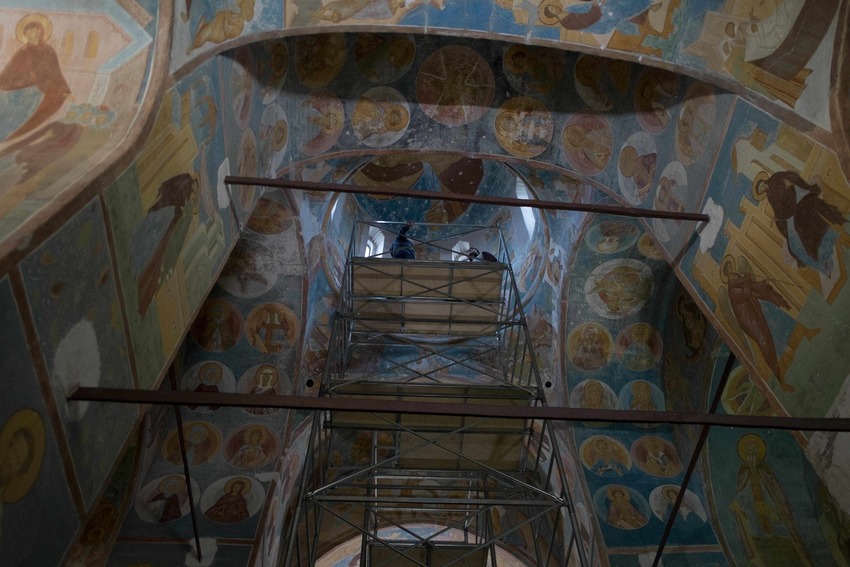 WEB
Find out more about the history and iconography of the frescoes on the Ferapontov Monastery website.
Read about the work the Peri Foundation is doing in Russia.