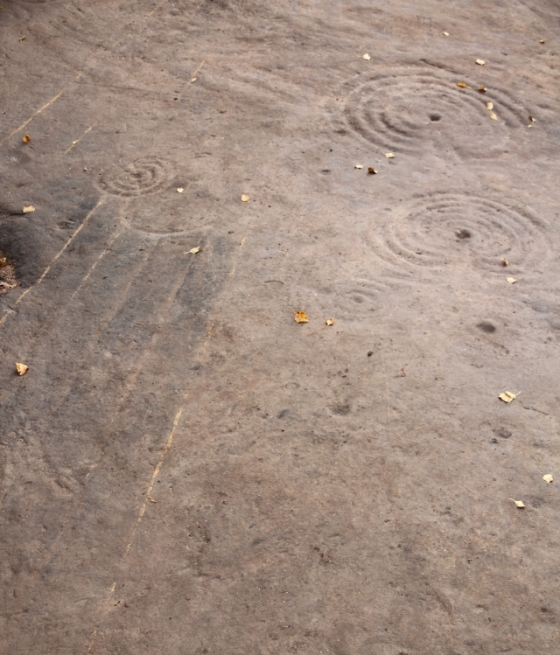 ‘Revealing the Cochno Stone’ was a project that excavated, 3D scanned and safely reburied the Cochno Stone, West Dunbartonshire, Scotland’s largest (8 x 13 m) and best example of Neolithic or Bronze Age (3000 to 2000 BC) cup and ring markings that was buried in 1965 to prevent it from being further vandalised. The aim of the project was to draw attention to one of the United Kingdom’s most important and most neglected prehistoric sites, with a view to gathering support for the production of a 1:1 facsimile that would be made using a combination of the recorded digital data and historical sources.

The objective of drawing attention was certainly achieved, with the story rapidly going viral in numerous reports in print, radio and television – reaching as far as Tasmania. Closer to the site, the project inspired a helicopter to fly over to take an aerial view of the stone. On top of the huge interest, a more extensive in-depth documentary being produced by the History Channel will be broadcast next year. Perhaps the greatest commendation, however, was the fact that the project was brought to the attention of the Scottish Parliament by the local MSP, Gil Patterson, in recognition of the importance of the work being undertaken. 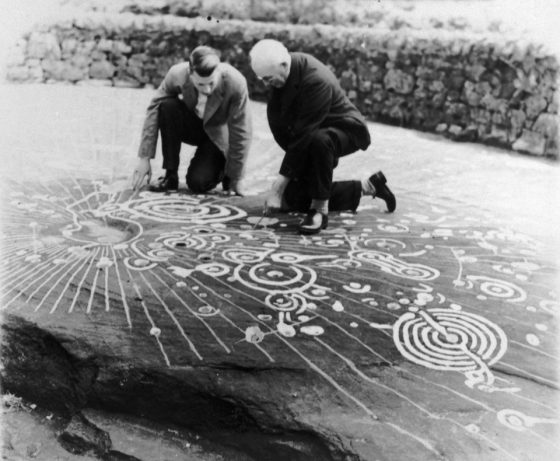 Ludovic Maclellan Mann explaining his eccentric theories as to the meaning of the markings.

The Cochno Stone has a multi-faceted biography: its importance as the most extensive and remarkable prehistoric rock-art panels in Britain, thought to be up to 5000 years old, its attention from archaeologist Ludovic Maclellan Mann (pictured above, high lighting the markings to illustrate his eccentric astronomical theories) as well as its more recent history, which tells a story that reflects the issues around the preservation of cultural heritage in the face of encroaching urbanisation. ‘Revealing the Cochno Stone’ has now become the next stage in that strange history, and it is hoped that the final stage of the project, the creation of a facsimile, would ensure the legacy of this extraordinary monument for the future.

The facsimile would reflect upon these previous layers of history by including the pre-1965 graffiti as well as the prehistoric surface, with both having been accurately recorded using a variety of digital imaging techniques (Aerial Photography, Laser Scanning and High Resolution Photogrammetry). It would also have a restoration (based on the evidence found on the stone and the extant documentation) of Mann’s paint markings. In doing this, the facsimile would attempt to explore how the modern world relates to its ancient past and point out some of the ironies of the history of the stone, in that, what is in a sense Neolithic ‘graffiti’ was removed from the local community as a result of then contemporary ‘vandalism’, and that the chief original photographs we have of the stone are of an ‘official’ visit that by today’s standards would be considered to have vandalised the stone. 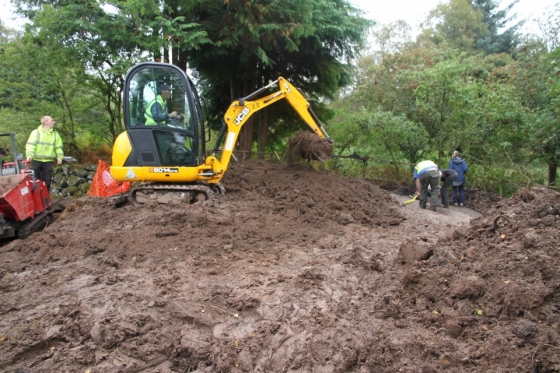 Removing the bulk of the soil from the stone with a mini digger.

The excavation began on the 5th of September with a team of students from the University of Glasgow Archaeology Department, led by Dr Kenny Brophy, working with Davey and Danny, digger driver and banksman from Green light Environmental Ltd. Factum Foundation were on hand with help from Tom Don and Dani Trew and with Richard Salmon, accompanied by his two children Jules and Lucie, providing advice on stone conservation.

The wet weather made working conditions extremely difficult, with the ground leading up to the stone quickly becoming chewed up and boggy from the digger and dumper tracks. To make sure that the digger bucket did not damage the surface of the stone by scraping it, the level of the soil was continually checked with a rod that gauged the depth of the stone and allowed Davey to carefully scrape back the soil layer by layer.

The excitement at the moment of revealing the first of the cup and ring markings cannot be understated, with the water washing away the last remnants of dirt and bringing glistening definition to the recess of the carvings. The majority of the soil was displaced by the end of the week, with rubber/plastic hand tools being employed to remove the final layer of soil. 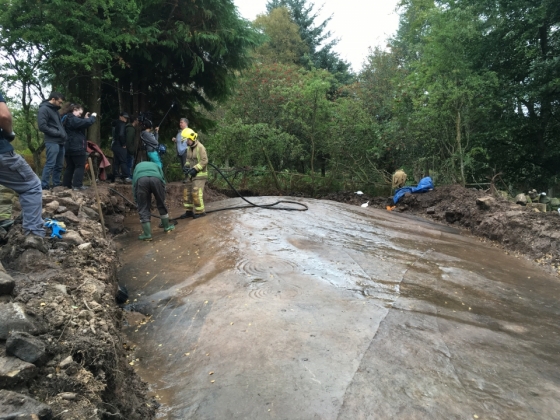 A fire-fighter from the Clydebank Fire Department cleaning the surface of the stone, directed by Richard Salmon

The project was extremely fortunate to benefit from the help offered by Clydebank Fire department in washing the stone (our gratitude goes in particular to Danny the fireman both for arranging this and for helping with so much of the digging). The pressure of the water had to be carefully regulated to strike the right balance between removing dirt and not damaging the carvings. Richard Salmon directed the area of application for the water jet, carefully removing particularly stubborn areas with a brush. The excess water was ran off the humped surface to the bottom of the stone and then out through two ditches, thereby preventing a build up of mud and water at the bottom.

One of the most exciting parts of the cleaning process was the revelation of evidence of Ludovic Maclellan Mann’s paint markings, with yellow lines radiating out from the area at the highest point that he believed to be of greatest importance for interpretation, red horizontal lines crossing these, rings marked in white and some cups marked in green. The most visible areas of this were towards the edges of the perimeter of the stone on the left hand side in the middle (as pictured above) and on the right hand side towards the top. This was a particularly significant finding in that it provides material evidence for an informed reconstruction of the markings, supported by the photographic evidence. It also presses more questions about how long his markings were left on the surface of the stone following their application in 1937. 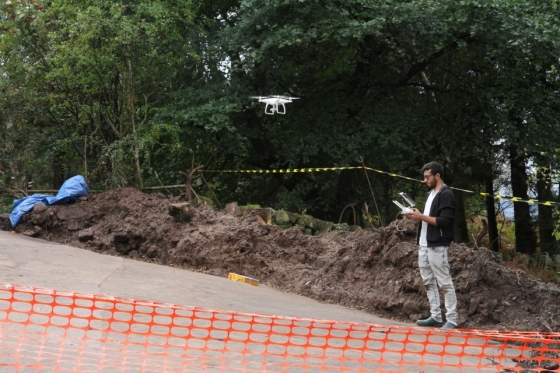 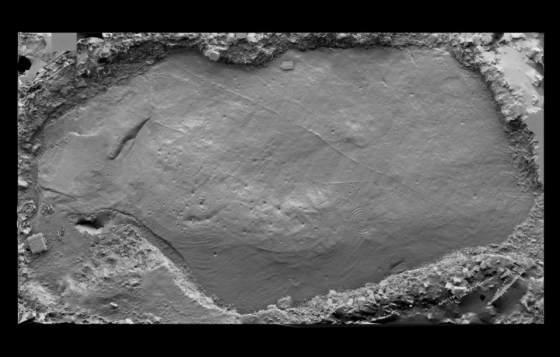 Render of the 3D-data gathered by the drone

The project design for recording the surface of the Cochno Stone was conceived of as gathering a number of different forms of three-dimensional data: low-resolution photogrammetry using a drone, high-resolution mounted on a slider on the actual stone and Lidar laser scanning. One of the challenges of the recording that had not been fully anticipated was the fact that working in early Autumn meant that leaves from the surrounding trees were a constant problem, requiring long sessions with dust-pans and brushes to clear them up to allow for an unrestricted view of the surface of the stone. This was particularly important for the first stage of the 3D recording, when using the drone, when the entirety of the surface had to be kept clean. In the second stage using the photogrammetry-rig only selected areas had to be kept free.

The drone was an extremely quick and effective way of generating an immediate low-resolution 3D-model of the surface of the stone. This was helpful to have on-site in communicating to the general public the kind of work that we were undertaking. The aim of the drone data was to provide a broad map of the surface of the stone onto which higher-resolution data could then be aligned. However, the level of resolution was still impressive, as can be seen from the render below which picks up much of the small graffiti. In future projects on this scale, it is clear that working with larger drones that can support cameras with higher resolution sensors will be the most efficient way of recording.

The next stage of the recording process was the gathering of high-resolution photographic data that could then be processed and aligned onto the map that the drone record provided. To achieve this, we used a simple horizontal rig with a step motor that sent the Canon 5DS R camera and ring-flash along the length of the guide, taking periodic shots of the surface of the stone. Strips were marked off, working from the lowest to point up breadthways along the length of the stone. This required the tripods to be adjusted and readjusted to get the correct level for the recording at each new position.

For the final stage of the recording, we are indebted to the Scottish Ten team who used Lidar technology (Leica P40) to map the entirety of the stone and its immediate surroundings. The benefit of this additional level of data is in its providing an extra reference to ensure the geometric accuracy of the entire model. An example of the early results of the processing of these varied data sets can be seen below. It shows an area particularly heavily damaged by graffiti and demonstrates the ability of the technology to show and accentuate features that were missed by the naked eye. 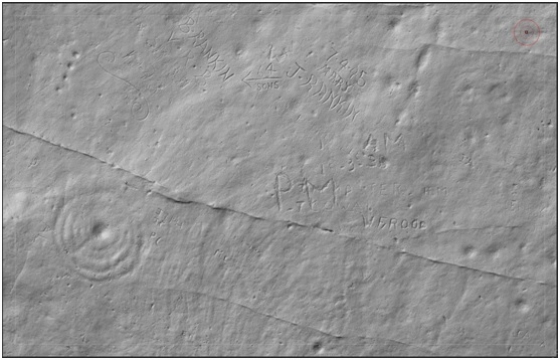 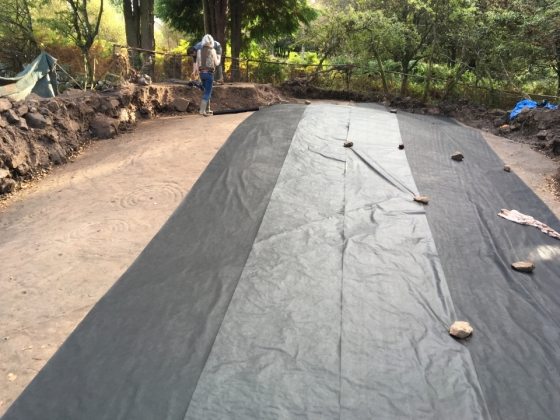 The final stage of the project was the reinstating of the spoil back onto the surface of the stone. Immediately before this commenced, a ‘pagan’ ceremony was performed courtesy of expert dowser Graehame Gardner, which was intended to let the stone return to the earth in a spirit of harmony. With a view to protecting the surface from larger rocks, as well as to ensure its longer-term preservation, a geotextile was laid across the entirety of the surface. Following this, a thin layer of soil was distributed on top of the geotextile so that the digger could replace the bulk without fear of damaging the carvings. With this, the Cochno Stone was concealed again, lying under the soil where it had been for the past 50 years, but with a new future ahead. 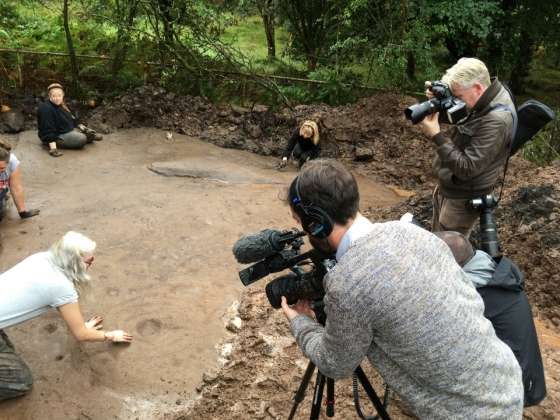 Journalists photographing students working on the surface of the stone

As mentioned in the introduction, the project benefited from extraordinary levels of media coverage. For this, thanks must be made to the Press Officer of the University of Glasgow, Jane Chilton, who ensured that the press morning had the maximum impact in breaking the story, which was picked up by most major newspapers as well as a number of more specialist archaeological publications. Although we are grateful to the many journalists and photographers who visited the site, particular thanks must be made to Huw Williams. Huw not only repeatedly visited the site, meaning that the story was featured a number of times by the BBC, but even joined in with some of the backfilling at the end! 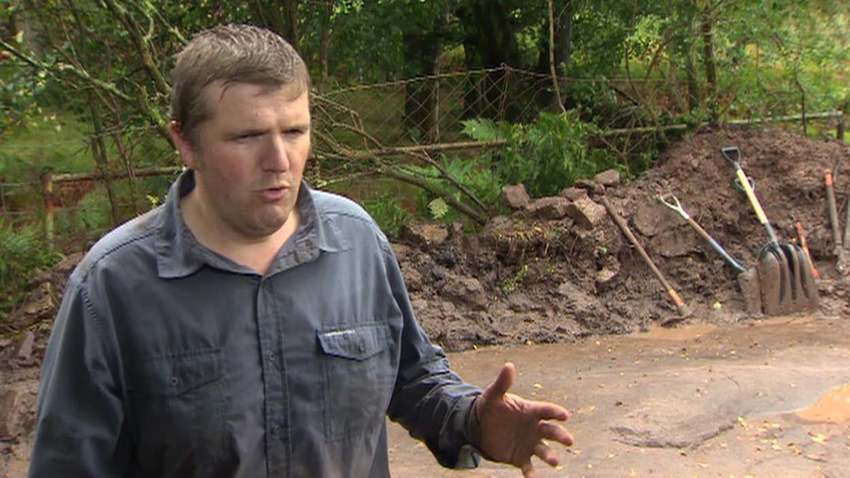 Coverage on BBC News Scotland. Click on the image to watch the video

The most important aspect of the reception of the project was how the local community engaged with the work being done. The site was witness to a steady stream of visitors: people who lived locally and were curious to see this monument that had been on their doorstep without their knowing, people who had grown up in the area and wanted to see the stone again and remember happy memories spent playing on it, people who wanted their children to see an important part of their history that might never be seen again. Many came back multiple times and many shared their thoughts and memories as well as views on what should be done and why it was important. 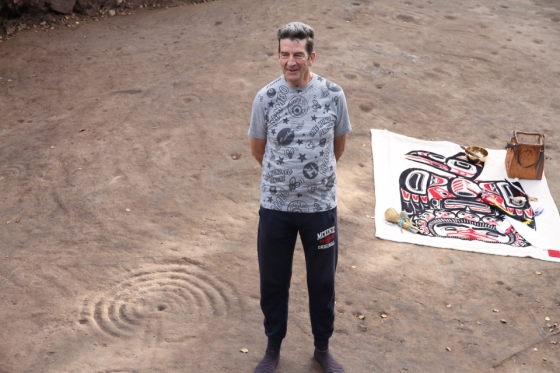 Stevie Cafferty: the unofficial ‘guardian’ of the Cochno Stone

Special mention must be made of Stevie Cafferty, who had known and loved the stone in his childhood and came to the site every day, often with a rucksack full of drinks for the team and always with a smile and an insight or piece of wisdom about what a beautiful thing it is when strangers are brought together and work together. Although he had high praise for the Cochno Stone and the magic of its markings, Stevie reserved his highest accolade to the artwork made by the pupils of Edinbarnet Primary School – an enormous mural in chalk in the nearby car park – knowing that the future of the stone lies in their appreciation. 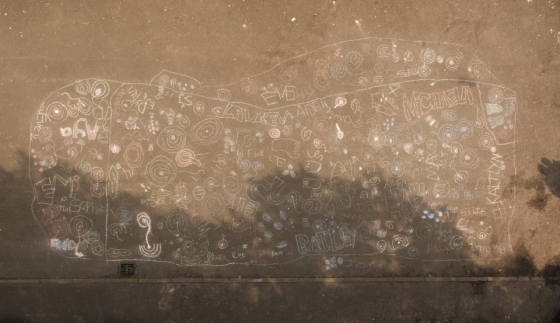