In order to house the TNPI’s new 3D Scanning, Archiving, and Training Centre in the Valley of the Kings, a significant work of Egyptian architecture, Hassan Fathy’s Stoppelaere House, was restored by Factum Foundation and the Tarek Waly Centre for Architecture and Heritage.

Stoppelaere House was built in 1951 by the Egyptian architect Hassan Fathy for Alexandre Stoppelaere, the Belgian chief restorer of the Department of Antiquities at that time. It occupies a prominent position at the entrance to the Valley of the Kings, perched on the top of a hill near Howard Carter House, the Facsimile of the Tomb of Tutankhamun and the Japanese Mission house.

Fathy was an architectural pioneer, spearheading a return in Egypt from western architectural trends to the use of adobe and traditional layouts designed to protect the occupants of buildings from the desert heat. Stoppelaere House provides ample evidence of his mastery of mudbrick vaulting techniques, and contains many architectural details that are characteristic of his work. The house is expressly designed to house an archeological mission: it was originally used as Stoppelaere’s headquarters and residence and as a guest house for the Department of Antiquities, and contained spaces for drafting and working.

The restoration of Stoppelaere House was completed in 2017 by Tarek Waly Center: Architecture and Heritage, with work carried out by a skilled local team from Quarna. The work was funded by Factum Foundation and Tarek Waly Center, and in exchange, the TNPI has been granted the use of the building for 10 years. 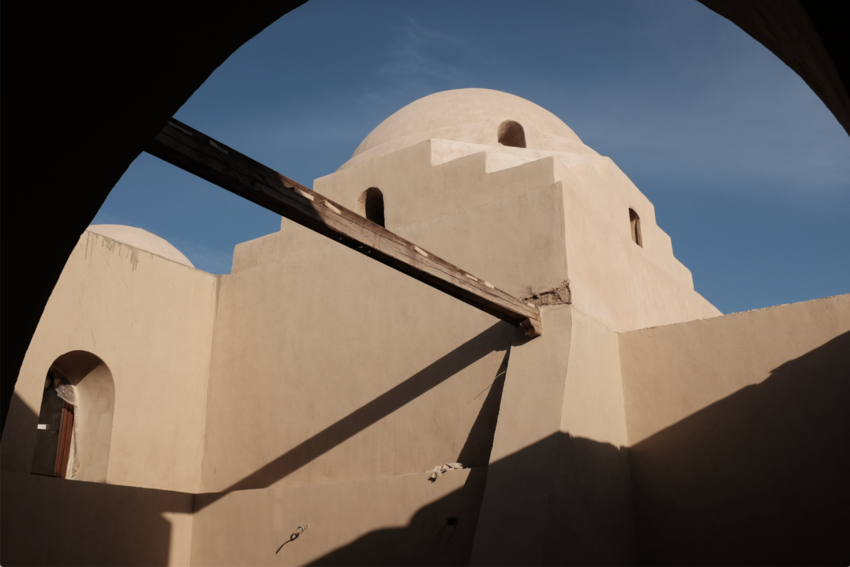 Prior to restoration, the house had been empty for an unknown period of time and was left without adequate maintenance. This resulted in severe deterioration to its condition. Many problems were visible to the naked eye, while others were revealed in the surveys that were carried out. Major structural weaknesses had been caused by weather, settlement in the surrounding soil and the erosion of the hill, and there had also been ground water erosion under the building due to poor plumbing.

Due to its poor condition, significant interventions were needed to rehabilitate the building and convert it for use as the 3D Scanning, Archiving and Training Centre. Structural interventions were essential. The first critically important work was to stabilise the existing structure through the insertion of a reinforced concrete ‘ring beam’ around the building’s foundations. The domes, external walls and the entire structure were then restored and everything possible was done to prevent future deterioration. Exterior elevation restoration and landscape redesign were also carried out.

The restoration was performed using the same techniques and materials used in building the house, although some modifications, such as the installation of new German ‘dust-proof’ windows, were made to enhance the functionality of the building. The doors and lattice work were all remade by local carpenters, and the entire interior was restored to the highest standard. New electrical wiring, plumbing and air-conditioning were also installed to fit the house for its new function. All the interventions took into account the need to provide the conditions for advanced digital recording technologies and archiving systems. Throughout the restoration process, contemporary needs were balanced with the necessity of preserving the architectural integrity and historic character of the house. 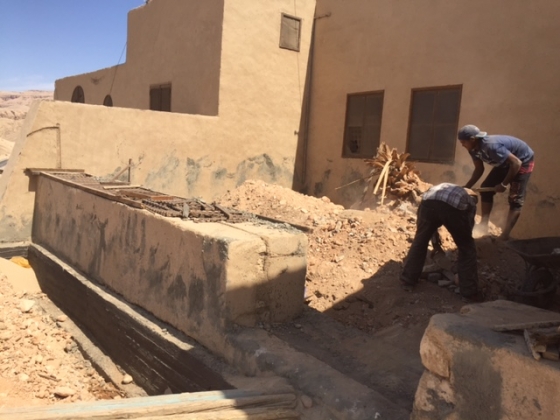 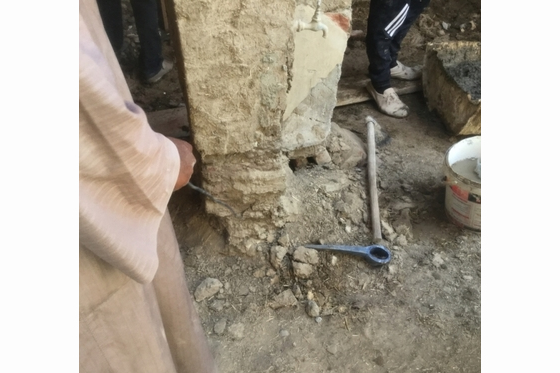 Once the foundation works were carried-out, the team worked on the mud-brick restoration 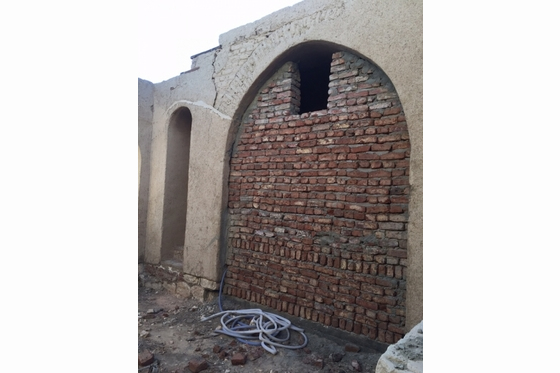 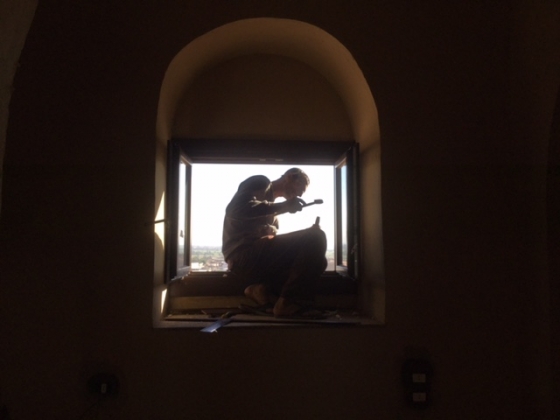 Restoration of the building´s windows 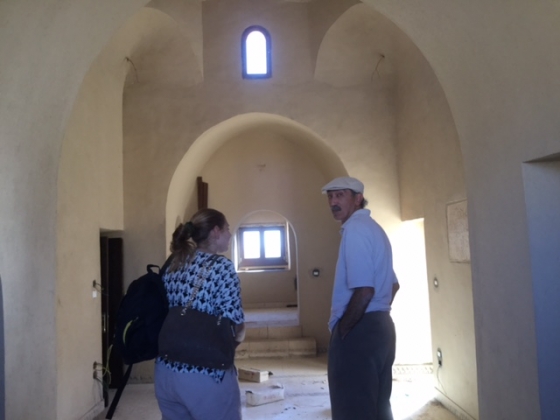 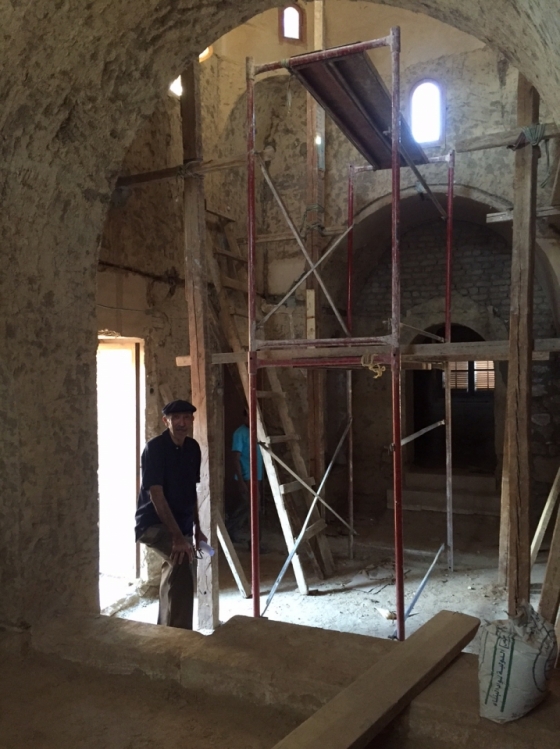 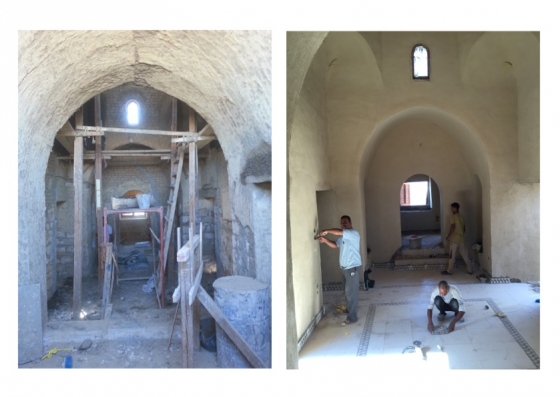 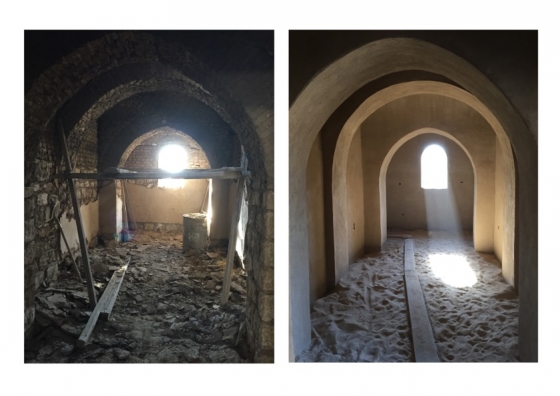 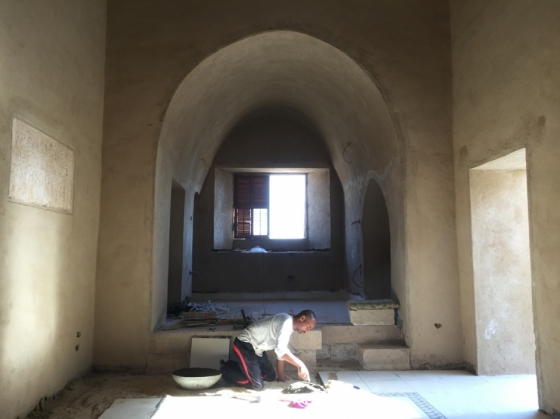 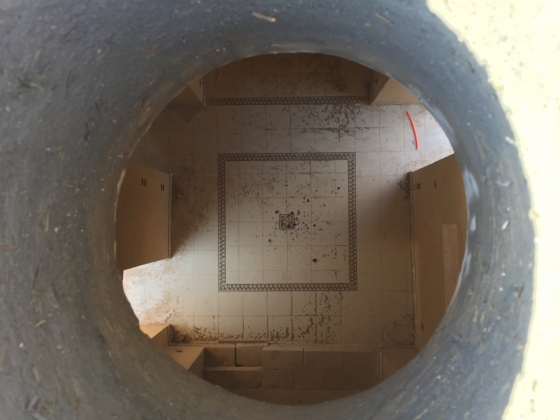 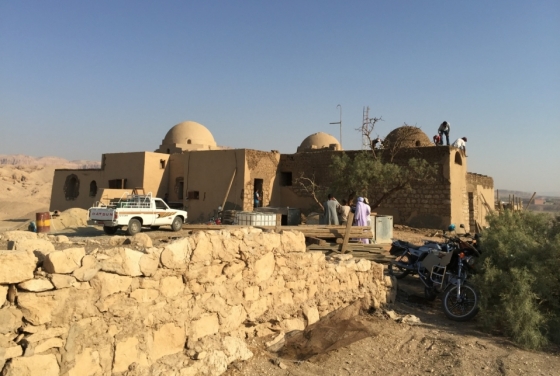 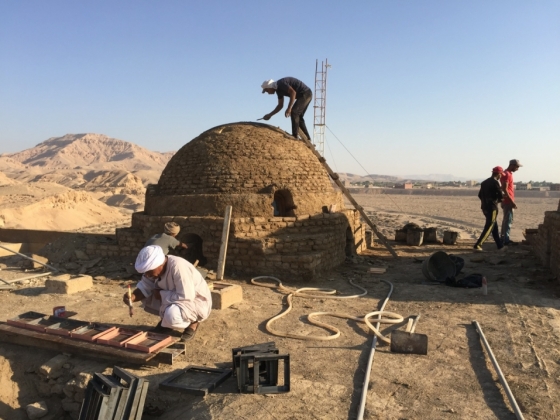 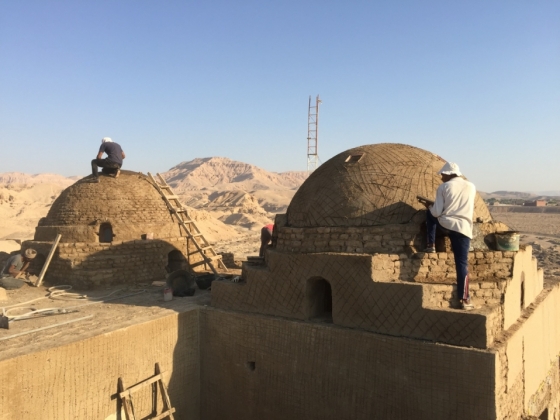 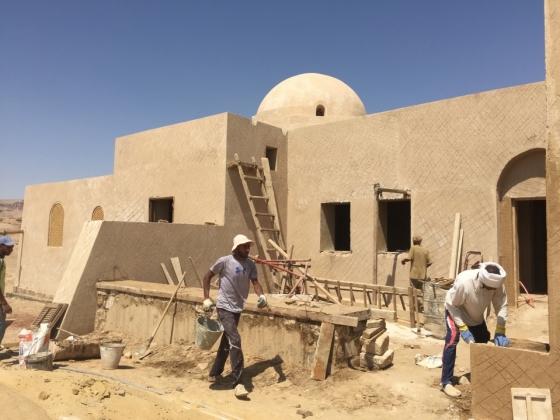 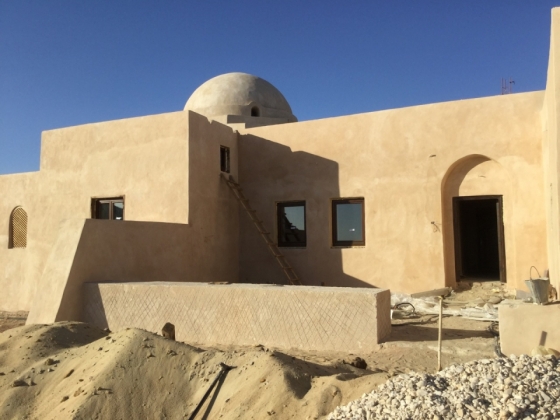 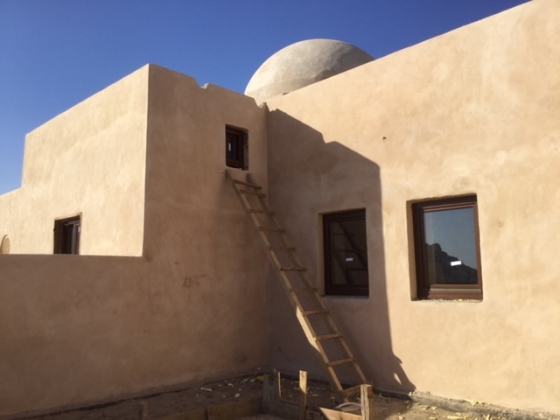 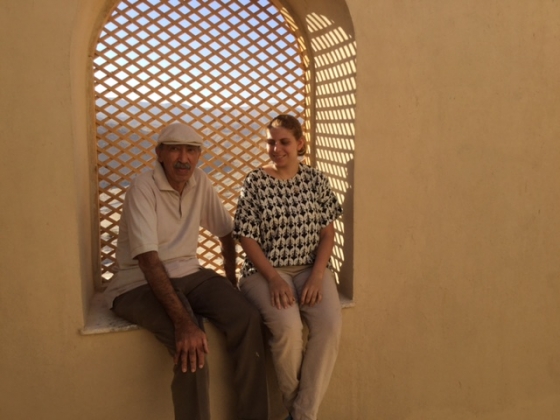 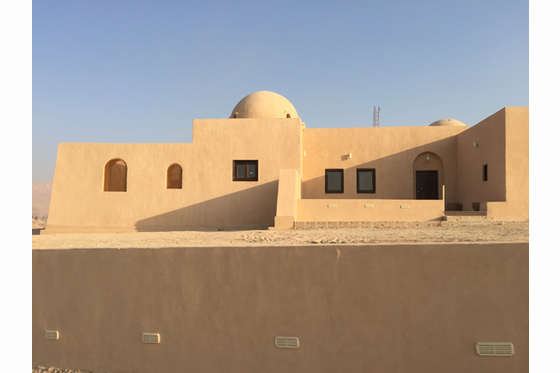 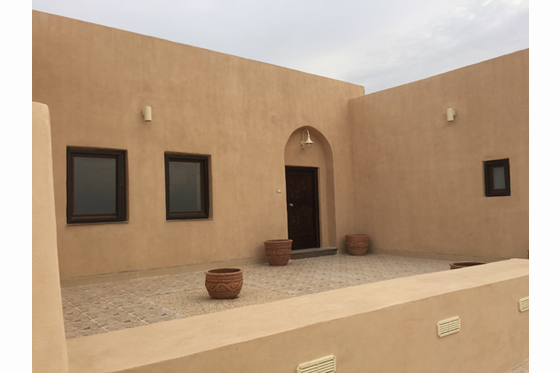 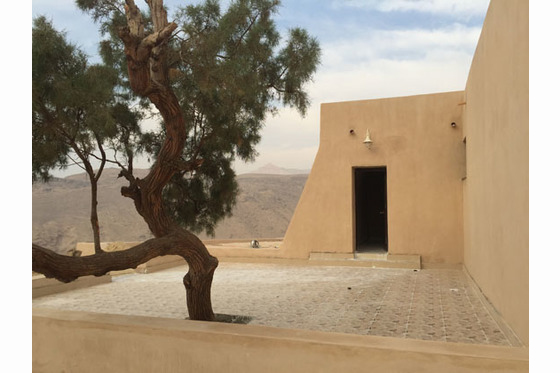 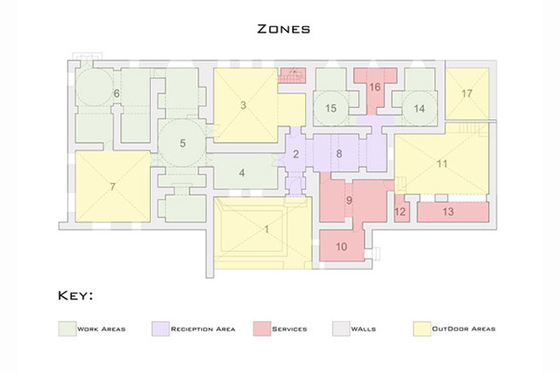 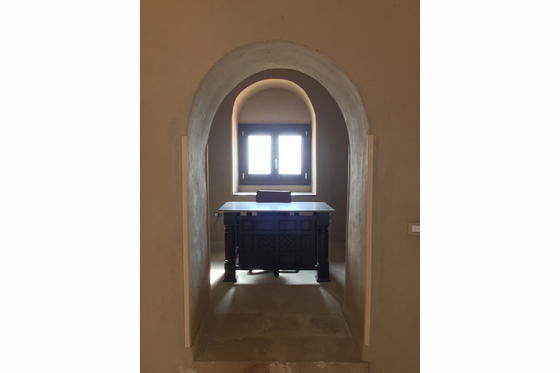 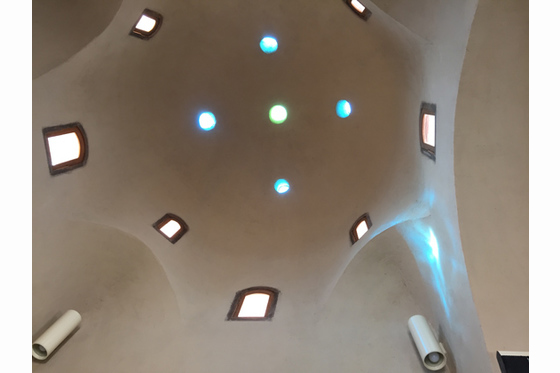 In February 2017, the 3D documentation training centre at Stoppelaere House was inaugurated in the presence of Khaled El Enany, the Egyptian Minister for Antiquities, Irina Bokova, then Director-General of UNESCO, and Markus Leitner, the Swiss Ambassador. In the time since the launch a contract covering the use of the building has been signed with the Ministry
of Antiquities.

In February 2019, the TNPI started to use the building for training and for processing data. More equipment is being sent and the aim is to equip and run a centre that will become a practical example of how technology can be used to preserve and disseminate cultural heritage. However, more work still needs to be done to ensure that the centre has a secure water and electricity supply and that it can function with maximum effeciency. 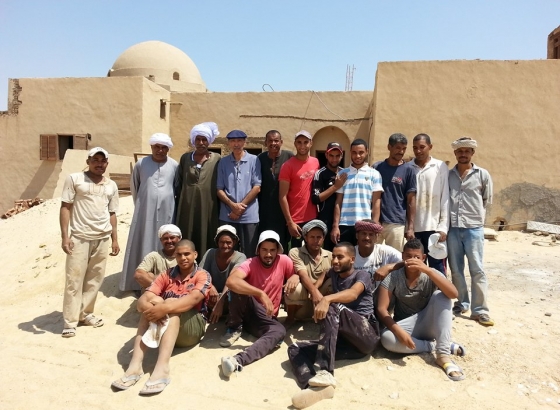 The Egyptian Minister for Antiquities Khaled El Enany, the Director General of UNESCO, Irina Bokova and Swiss Ambassador Markus Leitner attended the opening of the centre

You can read press coverage of the opening of the house in Morgenblandet (Norwegian) El País, and ABC (Spanish).

Back to Stoppelaere House main page