The tomb of Tutankhamun was discovered intact and in near perfect condition in 1922. The only damage to the interior in over 3000 years was the growth of micro-bacteria on the walls, suggesting that the tomb was painted and sealed quickly. Soon after the discovery, Howard Carter expressed concern that the entry of visitors would damage the fabric of the tomb.

The fragility of the surface of the burial chamber is clear. Every morning a thick layer of dust is wiped off the sheet of glass covering the sarcophagus. Removal of dust from the walls is a delicate task and any method of removal will lead to paint loss. Air borne pollutants, bacteria, micro-organisms and general wear-and-tear add to the problems, but the visitors also have a significant impact on the temperature and humidity in the tomb. On an average day, 1000 visitors enter the tomb of Tutankhamun. This creates a dynamic environment in which the plaster surface is forced to expand and contract eventually causing it to detach from the surface of the rock. 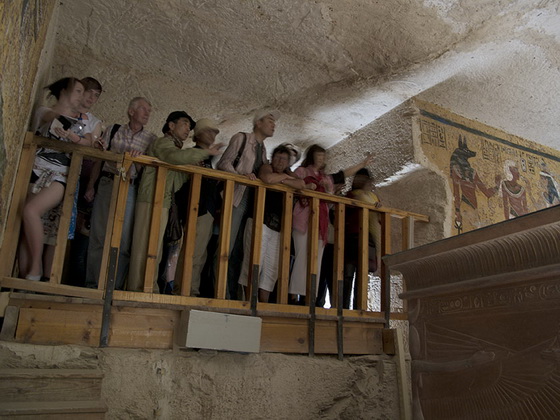 Visitors creating dynamic conditions in the Tomb of Tutankhamun

The Theban Necropolis Preservation Initiative (TNPI) was born as a response to these threats with the aim of protecting the integrity of the tomb for future generations and to provide a more sustainable access to the Valley of the Kings. The TNPI, a partnership between the Factum Foundation and the University of Basel operates under the supervision of the Egyptian Ministry of Antiquities, proposes an efficient and long term model of heritage preservation by supplying technologies developed to protect heritage, transferring the necessary skills to local operators, and recording and re-materializing fragile sites.

The work is being carried out in four phases:

The first two phases involve the creation of exact facsimiles of the tomb of Tutankhamun and Seti I. The facsimile of Tutankhamun was installed at the Valley of the Kings in Luxor in 2014.The facsimile of Seti I incorporates the fragments removed from the tomb since its discovery in 1871 by Giovanni Battista Belzoni, making its narrative and meaning more accessible and complete.These replicas are meant to provide access to spaces that should be protected from further damage or closed for conservation purposes. These two facsimiles are part of a wider effort to safeguard other fragile tombs of the Theban Necropolis such as the burial chambers of Queen Nefertari and Pharaoh Thutmosis III. The facsimiles of the tombs of Tutankhamun and Seti I will be donated to the Arab Republic of Egypt and will be installed near Carter´s House. 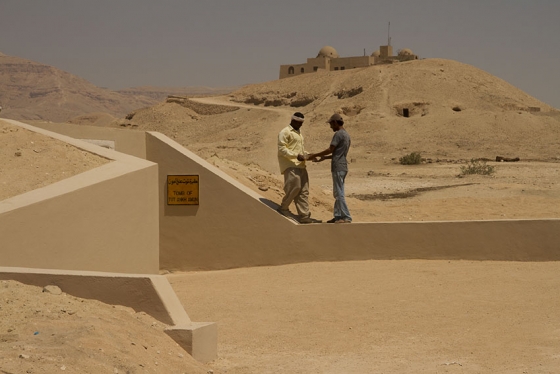 The third phase involves the restoration, and reconditioning as a training center, of Hassan Fathy´s Stoppelaere´s House, a domed mud-brick building. The restoration utilized local materials and traditional building techniques, preserving the original spirit of the design. A local team led by Tarek Waly renewed the foundations, the supporting walls and the roof of the former house of the French archeologist, Alexandre Stoppelaere. After the work, Factum Foundation equipped the restored house with the latest scanning and digital recording technologies and trained local technicians in 3D recording, data processing and archiving. The centre will be run by Aliaa Ismail, a graduate of the American University of Cairo who has been receiving training at Factum Arte in Madrid over twelve months. The TNPI Training Centre ensures that future work will be carried out locally and for the benefit of the community. 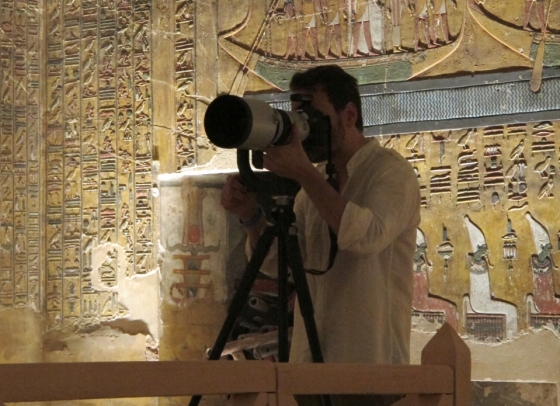 Gabriel Scarpa carrying out Panoramic recording with the Dr. Clauss in the Hall of Beauties, Tomb of Seti I, in May 2016

The final and most ambitious phase involves the organization of workshops and the set up of a permanent structure for local artisans to manufacture the high-resolution facsimiles of the tombs. These facsimiles will serve as visitor centres for the public to learn about non-contact approaches to conservation and the exciting technical innovations for documenting cultural heritage. These different methods of re-presenting the tombs will allow visitors to gain a deep understanding of their meaning and importance

In this way, the tombs will be preserved for future generations while continuing to generate the revenue that is vital for the local economy and will hopefully lead to the documentation of less famous but equally important tombs. 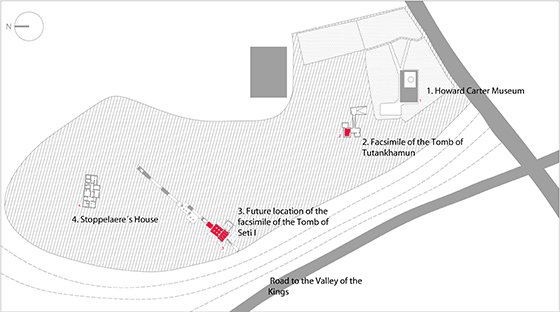