In summer 2015 British archaeologist Nicholas Reeves published his detailed observations based on the 3D data recorded by Factum Arte in the Tomb of Tutankhamun in 2009. His thesis is clear — he has identified what seem to be the traces of 2 sealed doors, which he believes will lead to the undiscovered tomb of Nefertiti.

It is clear proof of the importance of close-range high-resolution scanning: without a detailed recording of the surface of the tomb, with the relief renderings and the colour images presented in separate layers, his observations would not have been possible. The fact that Reeves was able to spend many hours over several years studying the data with forensic accuracy was essential.

If the hypothesis proves to be right, this major important discovery will capture the world’s imagination for many years. If it isn't, it will have nevertheless proven that technology can both reveal and preserve. The Supreme Council of Antiquities of Egypt thus gave permission to Nicholas Reeves to do in-place 3D resonances that supports his theories, which took place on 4th November 2015. 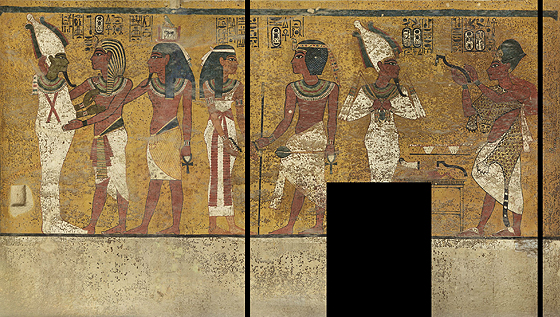 Marked in black the entrance to one of the undiscovered rooms that could be behind the North wall of Tutankhamun's tomb according to Nicholas Reeves’ hypothesis. 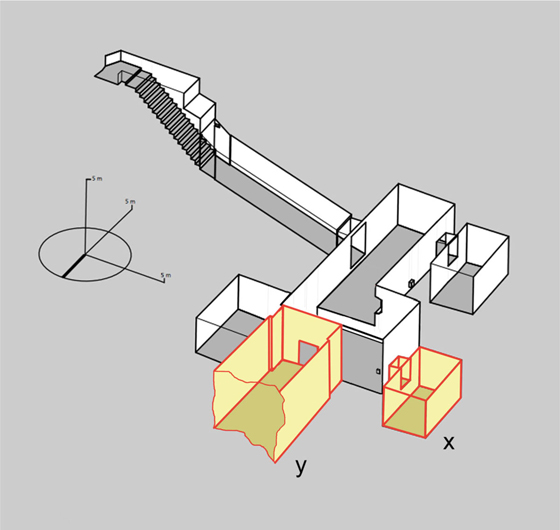 Marked in yellow the undiscovered rooms as for Reeves' hypothesis 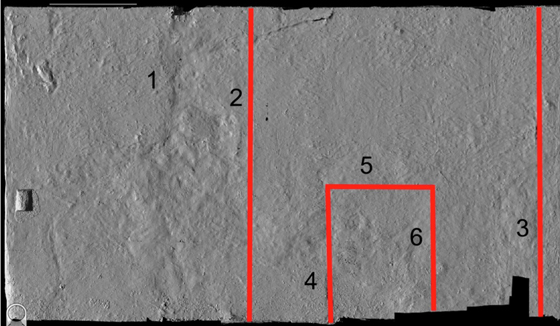 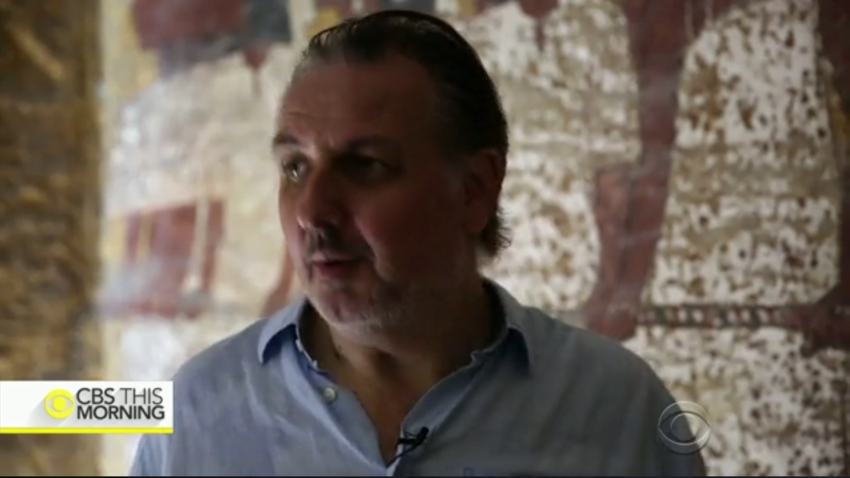 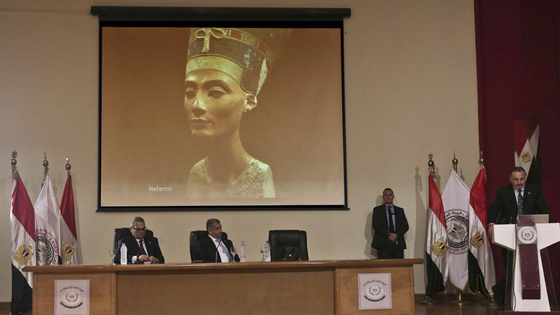 An international press conference was held by Antiquities Minister Dr. Mamdouh Eldamaty and Nicholas Reeves in Cairo. The conference aimed at declaring the results of the initial examination works performed inside the tomb of King Tutankhamun at the end of September as an attempt to prove the validity of Reeves' late hypothesis, presuming that Queen Nefertiti is buried inside one of the side chambers of King Tut's Tomb at the Valley of the Kings.

World-renowned archaeologist and former Egyptian Minister of Antiquities Zahi Hawass posted the following message on his Facebook page on the 1st October after the conference in Cairo.

"Tutankhamun and the Valley of the Kings are in the news again. Whatever is or isn't discovered, this story is about the use of technology to preserve and discover more about the past. Find out about the amazing technology used by Factum Arte to scan the tomb!" 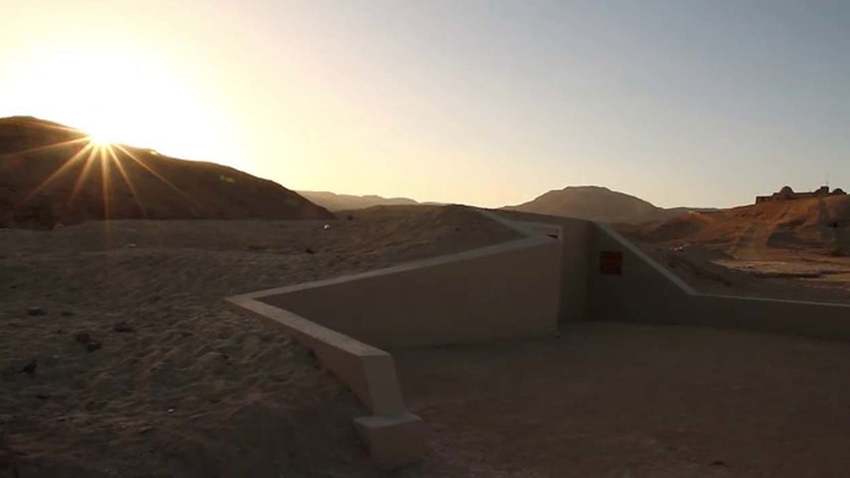 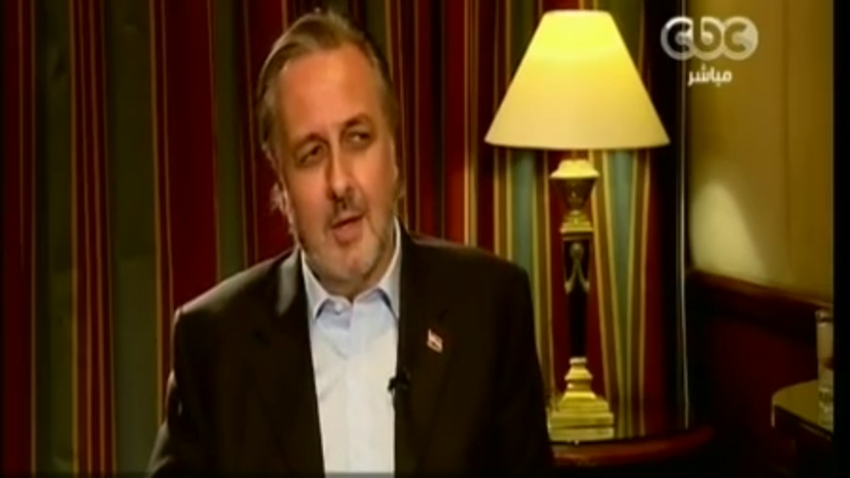 More announcements about the discovery of a new tomb inside Tutankhamun’s tomb appeared in the Spanish newspaper ABC and were then syndicated. Blink Films screened their documentary King Tut's Tomb: The Hidden Chamber. The documentary, part of which was filmed in Factum Arte in 2015, was a synthesis of views about Nicholas Reeves’ recent discovery of a new space behind the North wall of the burial chamber. Ground penetrating radar and thermal tomography tests both seem to imply that his insights, honed with forensic attention to detail as he studied Factum's high-resolution 3D and colour data while working at the Metropolitan Museum in New York, are correct.

Factum Arte sent a team to Luxor at the end of March. 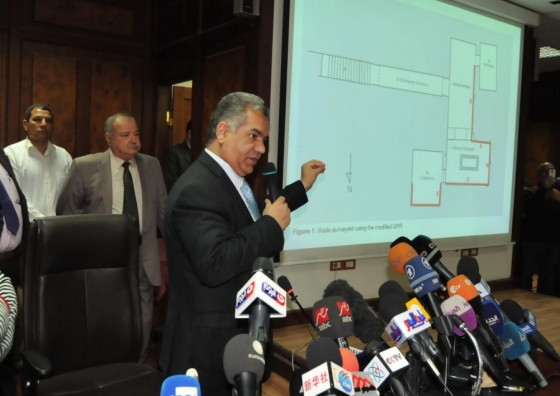 The Egyptian Minister of Antiquities Dr. Mamdouh Eldamaty declared the results of the radar scans performed by Hirokatsu Watanabe on 26th-27th November 2015, aimed at examining specific walls within the Tomb of Tutankamun using a specially-modified ground-penetrating radar. Eldamaty declared that results reached by Watanabe suggest the presence of two empty spaces or cavities beyond the decorated North and West walls of the Burial Chamber.
Within those cavities, added Eldamaty, analyzed data suggest the presence of metallic and organic substances. Those results, as Watanabe suggests, coincide with the supplementary elements of the KV 62 ground plan recently proposed by Dr. Nicholas Reeves.

Dr. Khaled El Anany (appointed as new Minister of Antiquities in March 2016) has confirmed the need of further radar scans to take place inside the Tomb.
Anani announced a test intended to determine the thickness of a possible wall behind the funerary chamber. “There is a possibility that there is a cavity, after the latest scan. I hope we will find something ... but as a scientist I need to be careful before announcing results,” he said.

During a conference held at the National Museum of Egyptian Civilization in June 2016, the debate was still pressing as reported by the Spanish newspaper ABC.