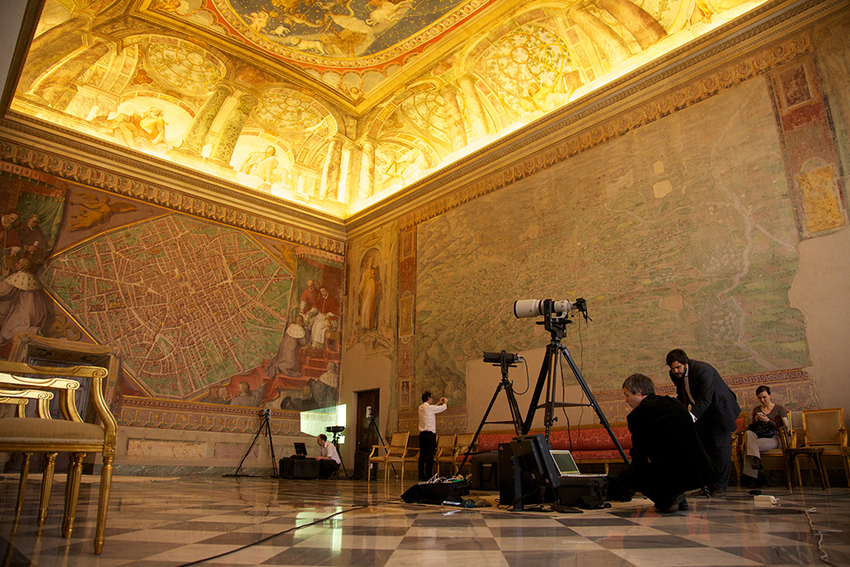 In April 2011, Factum Arte and Factum Foundation worked with the soon-to-be-opened Museo della Storia di Bologna and the Musei Vaticani to carry out the high-resolution recording of the Sala Bologna. This frescoed room, executed by Lorenzo Sabatini under the direction of the Bolognese pope Gregory XIII in 1575, lies at the heart of the Vatican Palace and is generally closed to the public.

The initial goal of the project was to create a copy of the vast birds-eye map of the city of Bologna, to be housed in Bologna's own Museo della Città, located within the walls of the Palazzo Pepoli. However, the 17-metre map on the west wall was in a poor condition after centuries of neglect, including long periods in which tapestries had been hung in front of the frescoes, and over the course of the recording it was decided to conduct a digital restoration.

The Sala Bologna was built on the instructions of the Bolognese pope Gregory XIII Boncompagni and painted by Lorenzo Sabatini, a Bolognese painter, to celebrate the Jubilee of 1575. It was not uncommon at the time for the Pope to request the presence at court of artists coming from his native region or city, often resulting in the promotion and diffusion of certain styles or figurative manners. 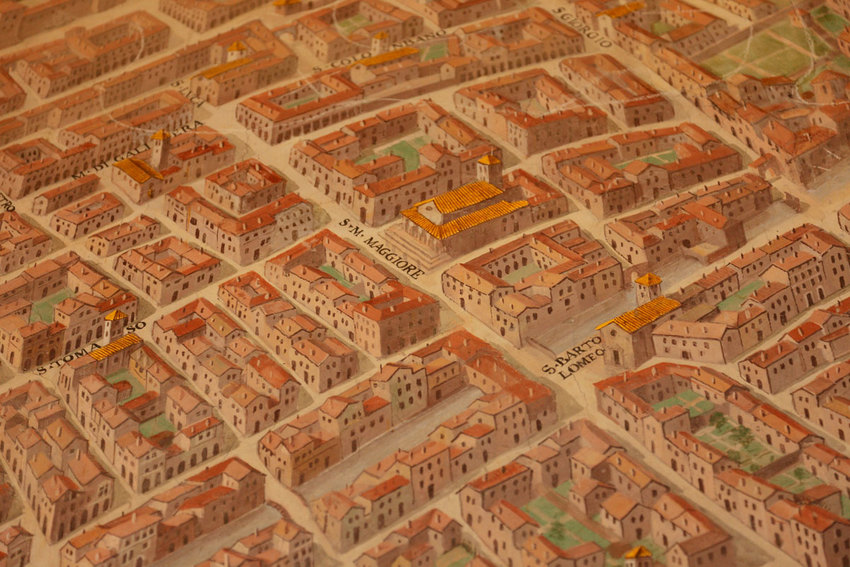 Every surface of the large rectangular room is decorated with frescoes. The south wall is dominated by a map of the city of Bologna. This is the largest known Renaissance city map, and shows the city in great detail, framed by the depictions of popes Gregory IX and Boniface VIII. On the west wall is the first cartographic image of the Bolognese territories, while the north wall presents a view of Bologna seen from San Michele in Bosco. The east wall is mostly undecorated; it was once the location of three windows looking out over the city of Rome. The ceiling depicts the night sky and zodiacal constellations from the outer-celestial point of view; unlike many celestial maps, it is not a view of the skies looking up but a view of the skies from a point of view looking down. 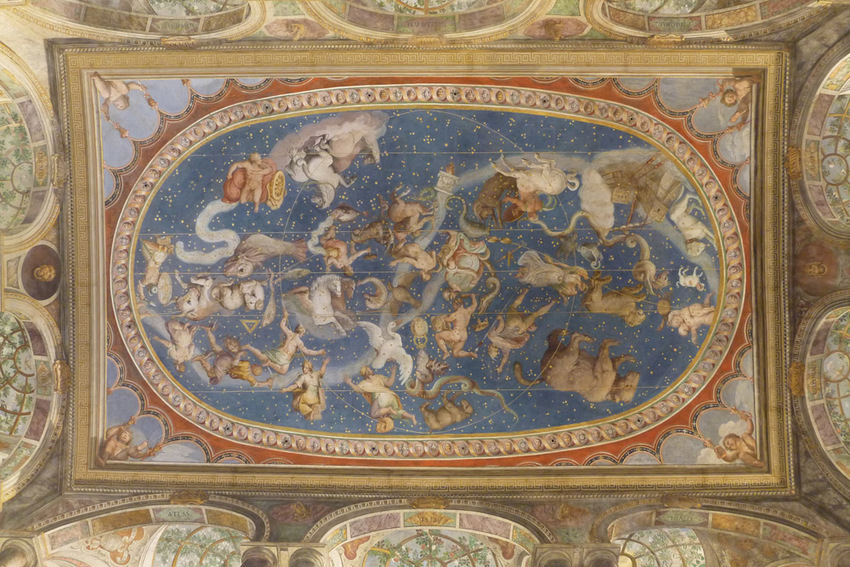 The ceiling of the Sala Bologna, daylight © Factum Foundation 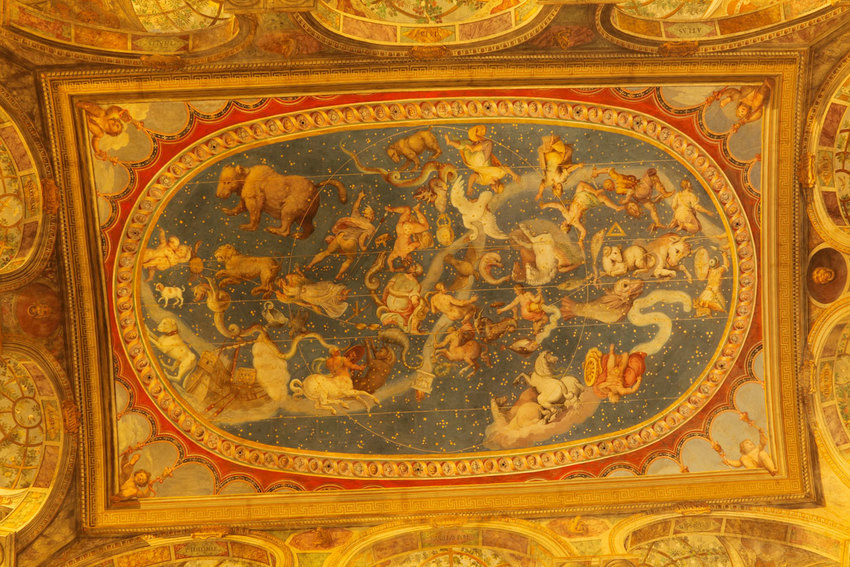 The ceiling of the Sala Bologna, nighttime © Factum Foundation The ceiling of the Sala Bologna (detail) © Factum Foundation 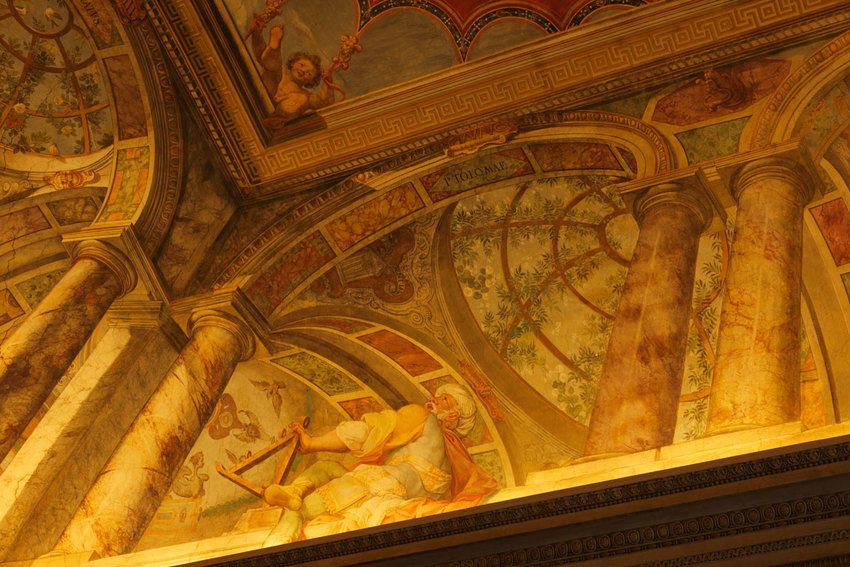 The decorative scheme was such that, if Gregory XIII had stood on his crest, a tailless heraldic dragon inlaid in marble in the centre of the floor, he would have been able to take in the view of Rome while simultaneously being surrounded by different representations of Bologna, images which virtually transposed his hometown into an idealized city state. When he looked up at the stars he saw them from the point of view of God looking down. In this bold cartographic representation, the pope was able to envisage the divine while simultaneously reflecting on earthly governance. Its conceptual use of different representational languages makes the Sala Bologna one of the most profoundly complex decorative cycles of its time.

The recording: View of the city of Bologna (south wall) 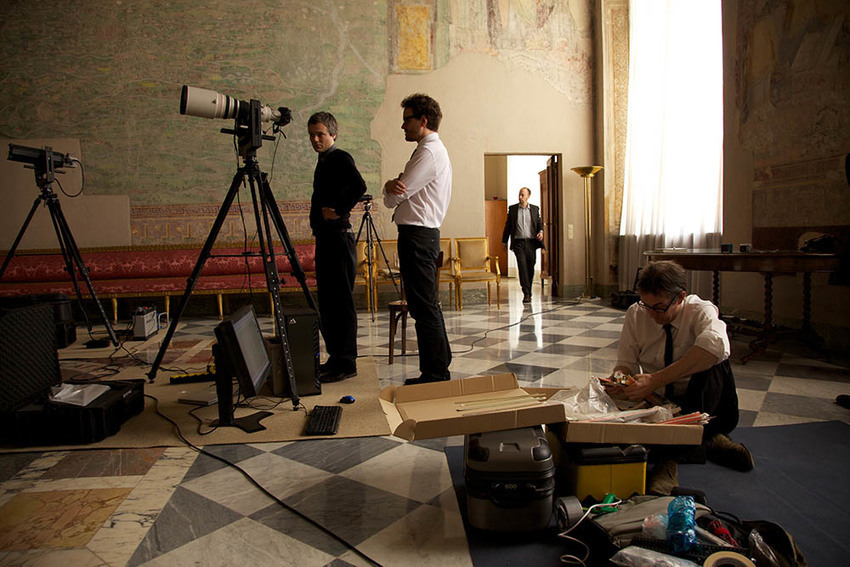 The recording in the Sala Bologna was carried out under the supervision of Rosanna Di Pinto and Filippo Petrignani and lasted for four days. The limited access and the scale of the work that had to be undertaken resulted in the use of two different systems capable of recording a vast amount of information in a short period of time: panoramic photography was selected over planar photography and Factum Foundation worked for the first time with a Dr Clauss panoramic head and a camera with a 600mm lens. Structured light scanning was chosen over laser scanning for recording the surface of the south wall. A NUB 3D SIDIO scanner and two independent markers were used. Both recording systems were modified for the work in the Sala Bologna, after being tested in Factum's workshops. 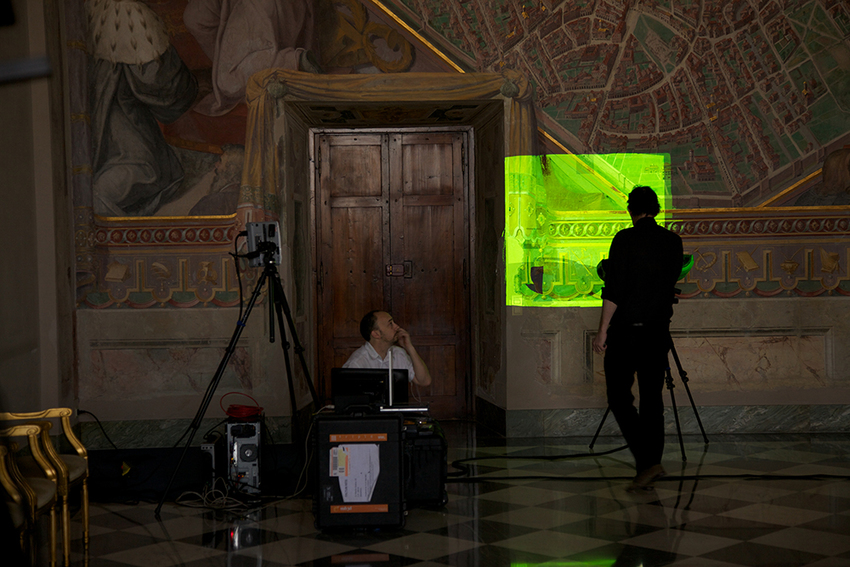 The facsimile: View of the city of Bologna (south wall)

During the recording phase, colour matches were used to gather accurate information on the colour, tone and reflectivity of the original fresco, in order for the facsimile to be exact. The colour was printed on a number of aluminum panels coated in gesso to reproduce the surface: the complete facsimile measures 6x9 meters in total. 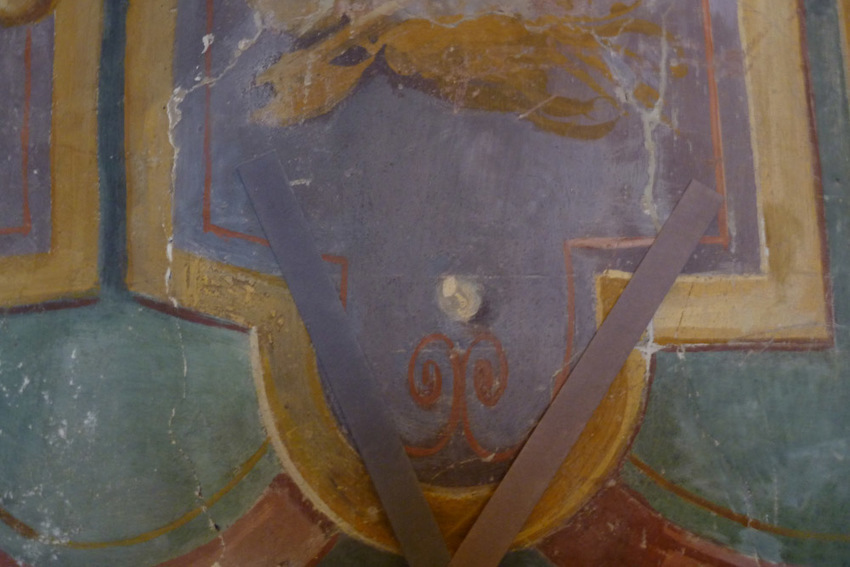 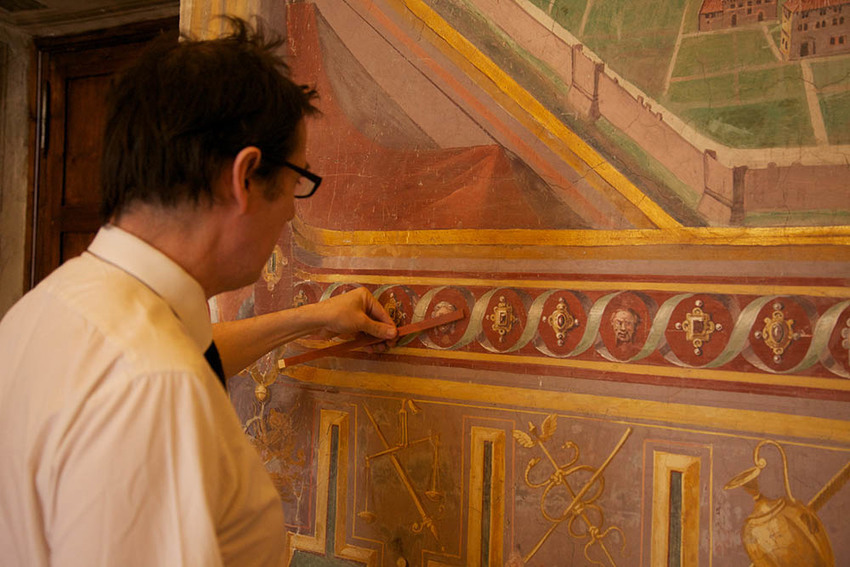 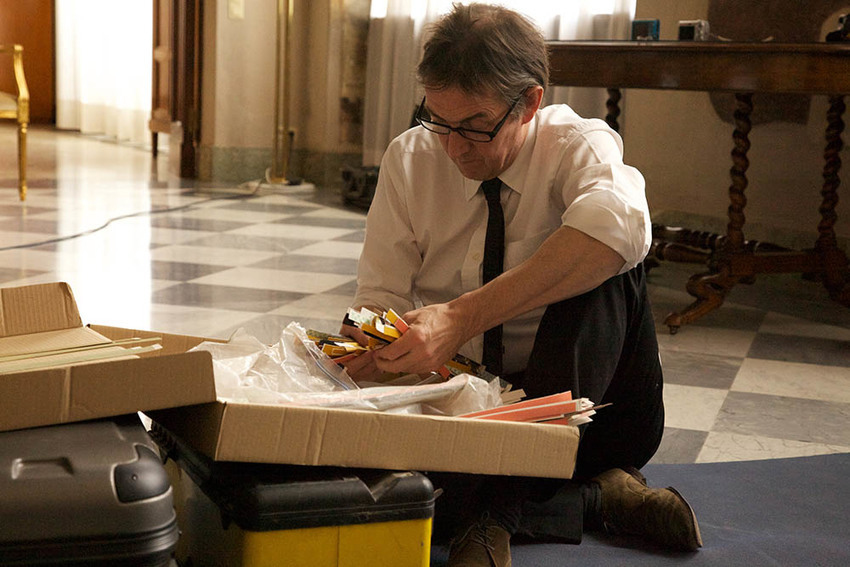 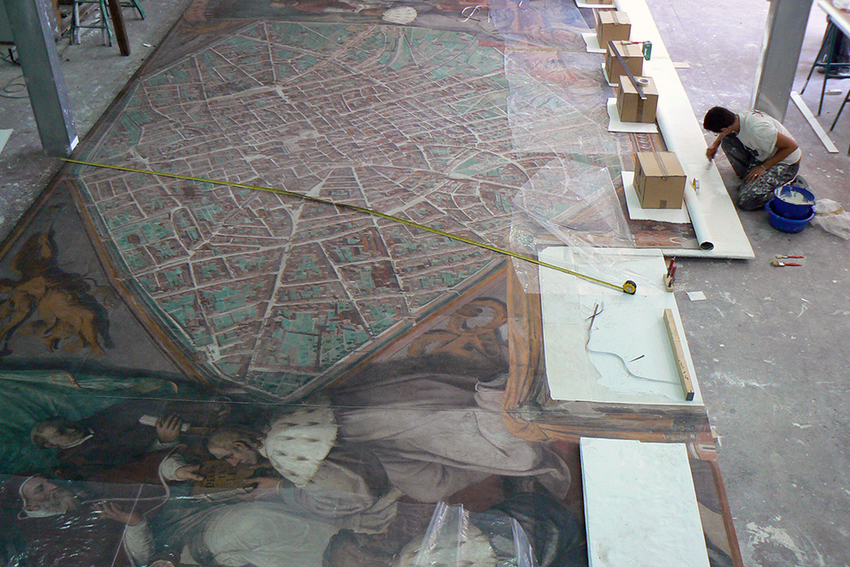 Assembling and finishing touches of the individual panels © Factum Arte The surface information is key to a perfect facsimile © Factum Arte 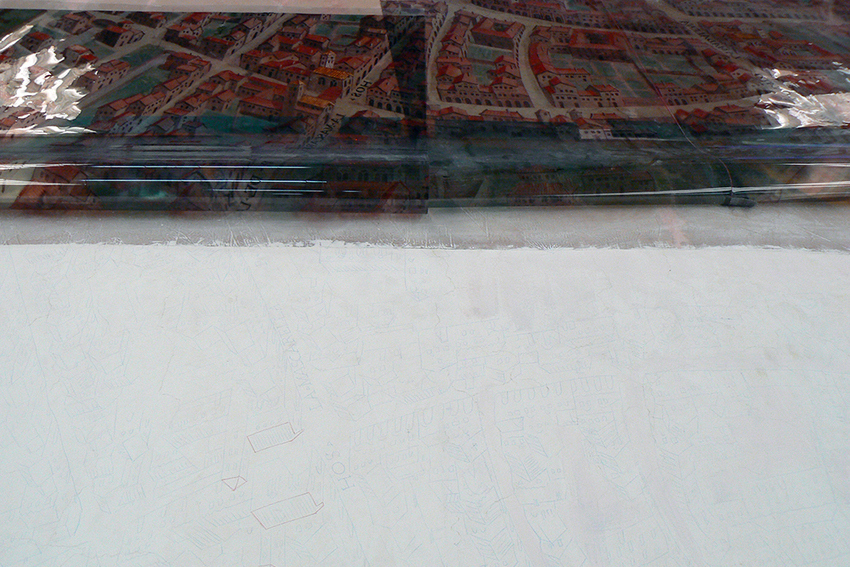 The surface information being matched with colour, using an acetate sheet, before printing the colour onto the invidual panels © Factum Arte 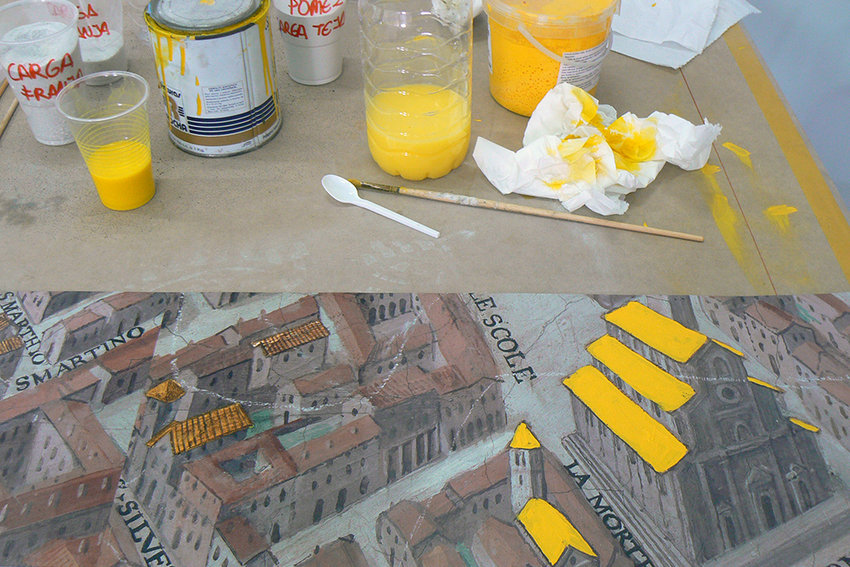 Preparation for the gilding © Factum Arte Gilding of the details © Factum Arte

The facsimile of the south wall was installed at the entrance of Palazzo Pepoli in October 2011, before the opening of the Museo della Città in January 2012. The facsimile installed in the hall of Palazzo Pepoli, which houses the Museo della Storia di Bologna © courtesy of Genus Bononiae

Digital restoration: Map of the province of Bologna (west wall) The digital data acquired during the high-resolution recording of the room, using a Dr. Clauss Panoramic System, became part of a complex virtual restoration project carried out with the help of Francesco Ceccarelli and the University of Bologna. 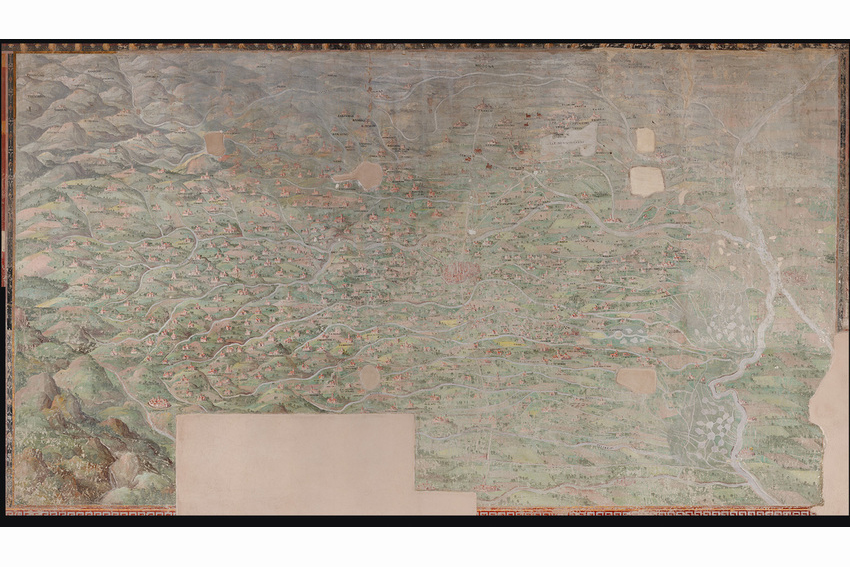 The map of the province of Bologna (original) © Factum Foundation The map of the province of Bologna (digital restoration) © Factum Foundation

After digitally removing the numerous cracks, nail holes (from which tapestries have been hung) and infills from the surface of the wall, toponymic research was conducted by Francesco Ceccarelli using documents, drawings and maps from the same period. This aided in the reconstruction of the damaged areas - the largest of which measured 34x38 cm - and the restitution of many illegible names depicted on the map showing the regions surrounding Bologna. Within the area of the city of Bologna itself on this map, it was noticed that an area coinciding exactly with the location of the Basilica of San Petronio was missing; this was re-created and reintegrated into the overall design.

Detail of the original © Factum Foundation

The final stage of the project was the careful and difficult restoration of the countryside, including details of fields, streams, rivers, water works, hills and contours.

As is standard protocol in restoration practice, all additions were highlighted using a different chromatic code. The overall principle was to preserve as much information as possible, taking into account the complex history and previous restorations of the fresco.

This animation shows a preview of the digital restoration on a damaged area of the map that shows the surroundings of the city of Bologna. 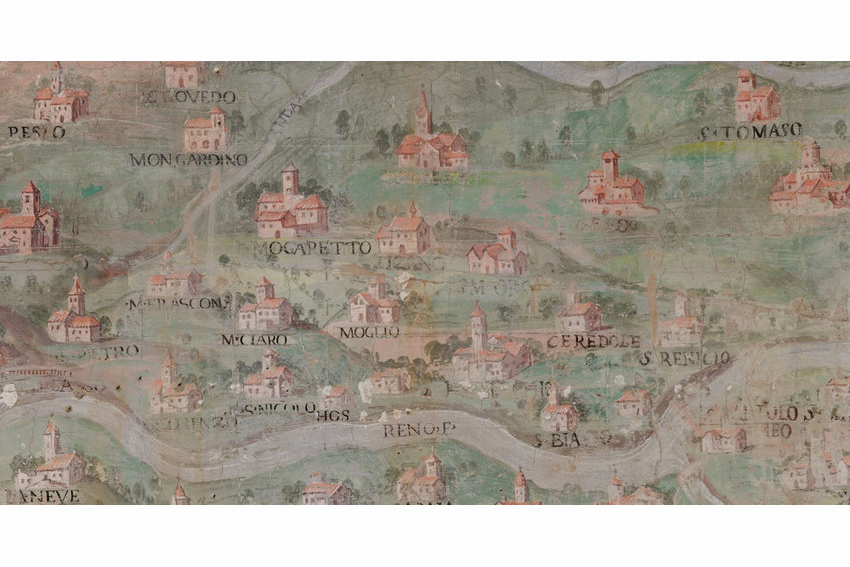 Detail of the province of Bologna (original) © Factum Foundation Detail of the province of Bologna (cracks removed) © Factum Foundation Detail of the province of Bologna (digitally restored) © Factum Foundation

Mapping a Map, the complete report on the Sala Bologna project, written by Adam Lowe, can be found here.

La Sala Bologna nei Palazzi Vaticani is a complete study of the history, significance and digital restoration of the west wall of the Sala Bologna. It was edited by Francesco Ceccarelli and Nadja Aksamija and published in 2011 by Marsilio Editore.