In May 2012, the IUAV -Instituto Universitario di Architettura di Venezia- invited Adam Lowe, director of Factum Arte, to teach in the Master in Digital Architecture. The team of Factum Arte was in charge of the last module of the year, about rapid prototyping and digital fabrication. During five weeks, the students were asked to develop a theoretic project experimenting around the qualities of the 3D form generated from 2D information. This uncommon approach challenged the conventional habits of the creative process and encouraged the students to rethink of the possibilities of the latest recording technologies to generate contemporary forms.

Following the course, an exchange programme has been agreed together with the Factum Foundation. Three of the Master´s students have moved to Madrid on internships at Factum Arte's workshops and will put in practice some of the skills learned during the year (June 25 to October 10). Architects Bianca Maria Marchioro and Francesco Cigognetti and art historian Manuela Serando, spent 4 months in Madrid - from July until the end of October 2012- participating in different projects related to 2D-3D mediation. 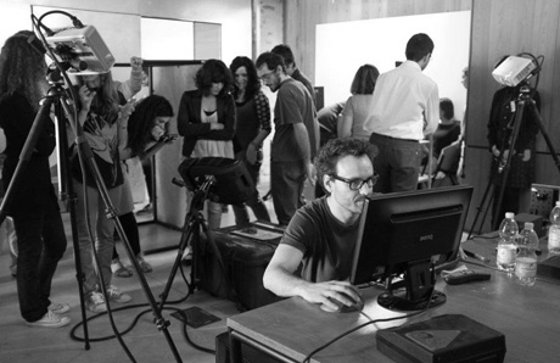 Bianca and Francesco have been working on the process of 3D fabrication for a series of art and conservation projects including scanning, modeling, post-processing, preparation of files for stereolithographic fabrication and routing, etc. On another major project that involves the Foundation, they have been working on the first 3D scanning of the capitols of the romanesque cloister of Tudela Cathedral, in Navarra (Spain) and the results of their work presented to the public at the end of the year.

Manuela Serrando has been part of the team working on a unique project of digital restoration of the map of the province of the Vatican's Sala Bologna, digitalised by Factum Arte, which will be exhibited shortly. Also on the digital 3D reconstruction of the Castle of San Marino on this map, as well as the development of tapestries for the cuban artist Carlos Garaicoa.

The programme has made it clear to Factum that working with students like this provides great value to both the project and the intern. As the programme has been so successful it has been decided to look to develop other intern related projects in future.