Recreation of a leather wall hanging 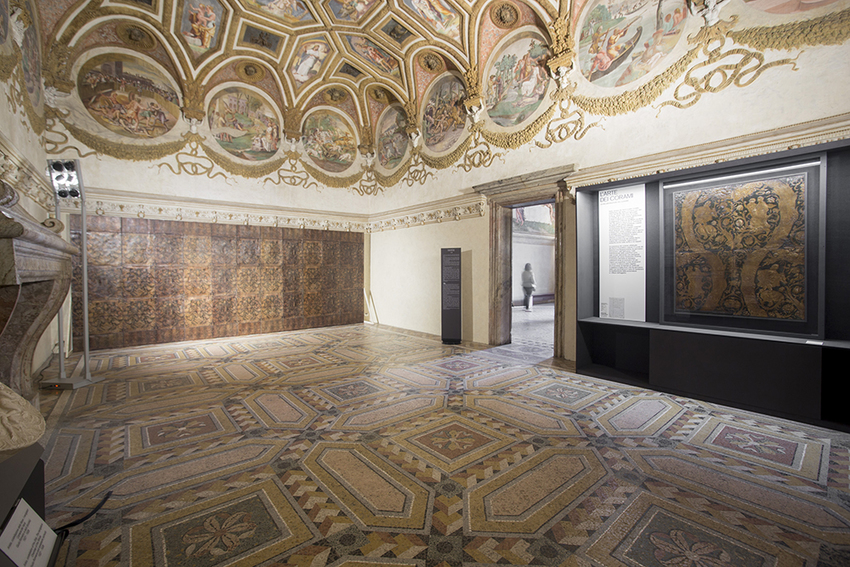 Factum Arte and Factum Foundation have worked with Fondazione Palazzo Te to recreate the atmosphere that once welcomed the guests of the Gonzaga family for the visitors of the exhibition Le pareti delle meraviglie (26 March - 26 June, 2022).

Not much is left of the sumptuous leather wall hangings (also called corami, from the Latin corium, 'leather') that once covered some of the walls of Palazzo Te. The craft required great leatherworking skills and expensive materials, and was considered an alternative to tapestries during the warmer months of the year.

During the 16th century, the main centres of production of leather wall hanging were Córdoba, where the craft was imported from the city of Gadamis in Libya during the Moorish rule (giving it the name guadamecil); and Venice, wherein leathercrafters acquired guild status (inside the Scuola dei Pittori) in 1569. Bologna was also a notable centre for leatherworking.

In January 2022, a 17th-century Leather wallpaper with flower vases was recorded in high resolution inside the collection of the Musée des Arts Décoratifs in Paris. The large object was recorded using both the Lucida 3D Scanner and photogrammetry, accurately capturing the subtly carved surface; colour was acquired using composite photography. The reflective nature of leather and its silver and gold embossings made the recording a complex task.

The different sets of data were processed and merged in Factum's headquarters, but it was the modular nature of the corame that allowed Factum to make a recreation fitted to the spaces of the Camera dei Venti.

The 2D department played with both relief and colour, expanding and adapting the original data so that the new object could offer a variety of natural ondulations and tone variations on its surface. As per Fondazione Palazzo Te's request, the object needed to be free-standing inside the room without touching the wall. A base panel simulating the leather ondulations was therefore CNC-milled on polyurethane, and later mounted on an aluminium structure.

The embossed surface was recreated in 'tiles' using elevated printing, moulded in silicone and cast in a series of thin, gelatin-based skins, painted gold to simulate gilding. The colour was printed over the skins using Factum arte's custom inkjet flatbed printer, gradually building layer after layer of tone over the textured surface in perfect registration with the creases, punchmarks and surface details.

The printed 'tiles' were then applied to the CNC-milled panels and the joints were hand-painted before a final layer of wax was applied to the whole piece, in order to emulate the gloss of cured leather. 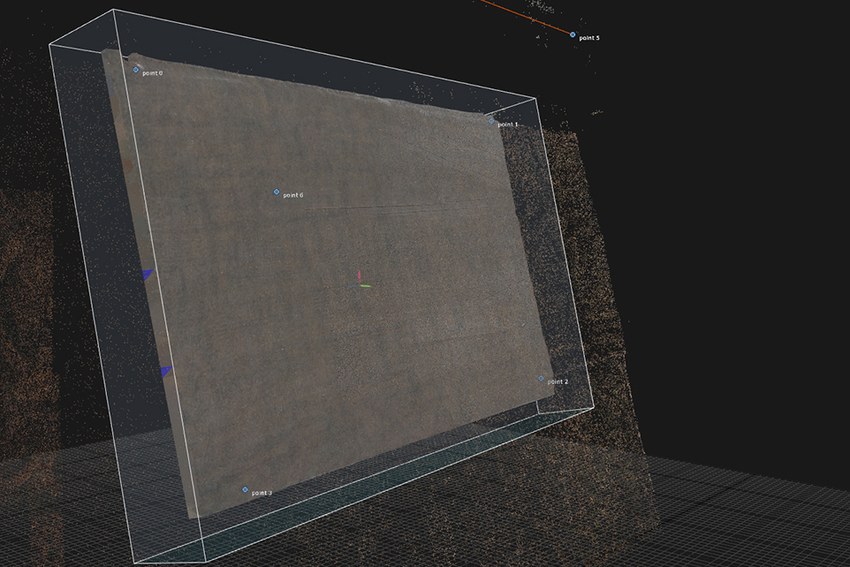 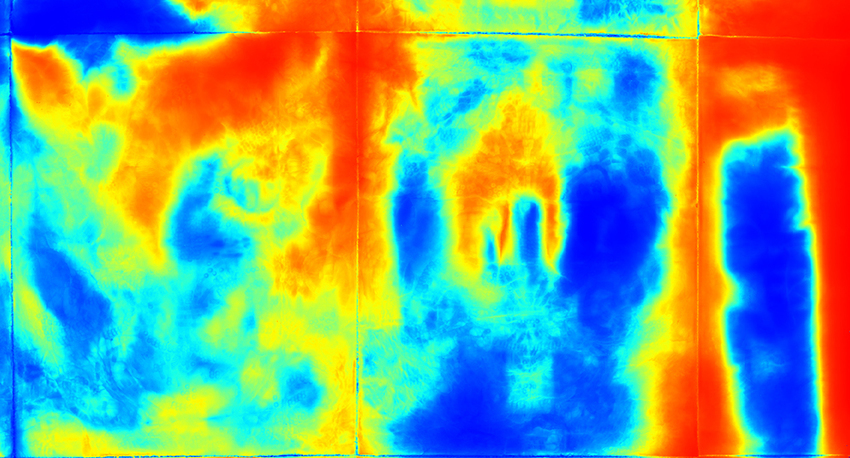 Depth map of the surface, elaborating from the data captured by the Lucida 3D Scanner © Factum Arte 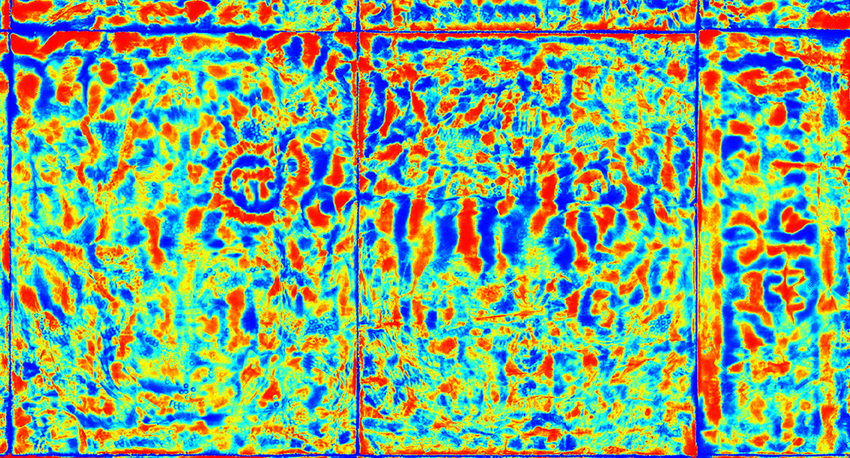 Depth map of the surface, elaborating from the data captured by the Lucida 3D Scanner, merged with the shaded render © Factum Arte 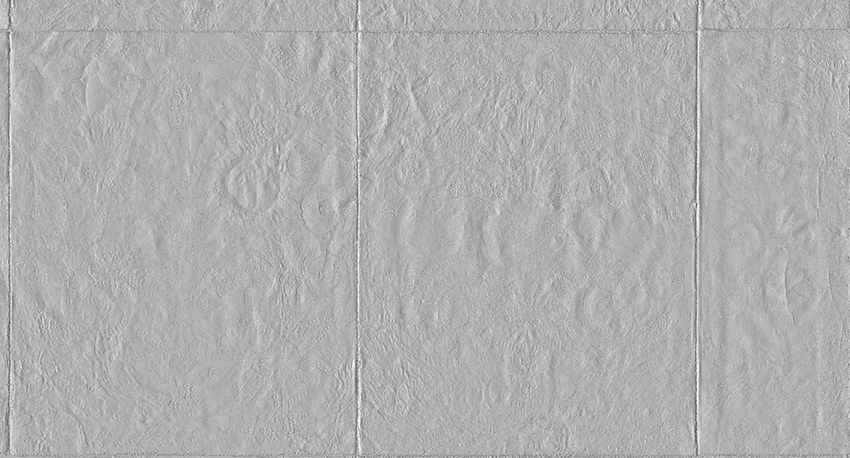 Depth map of a section of the recreation © Factum Arte

Colour layer of a section of the recreation © Factum Arte 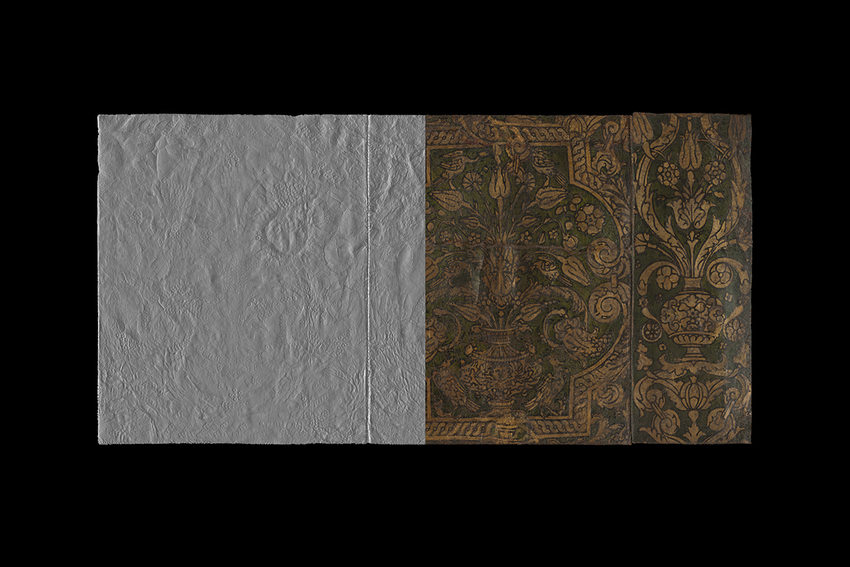 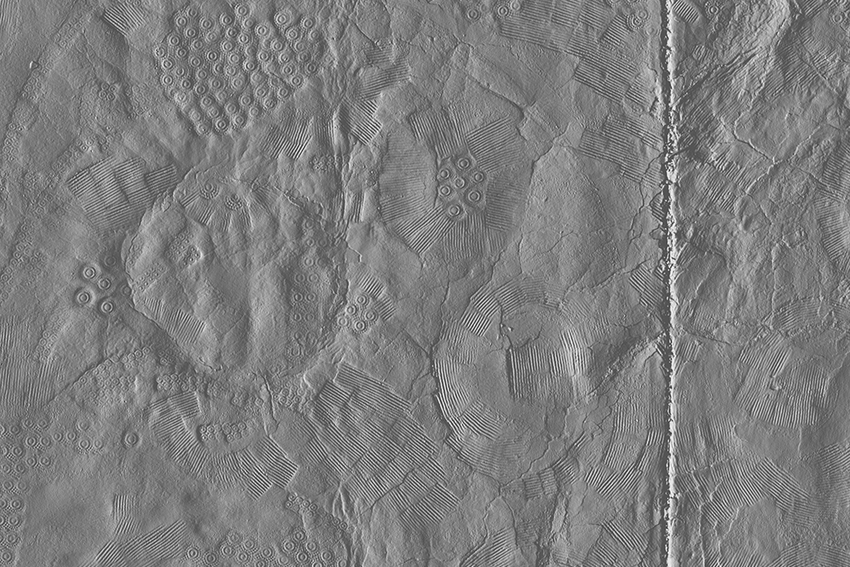 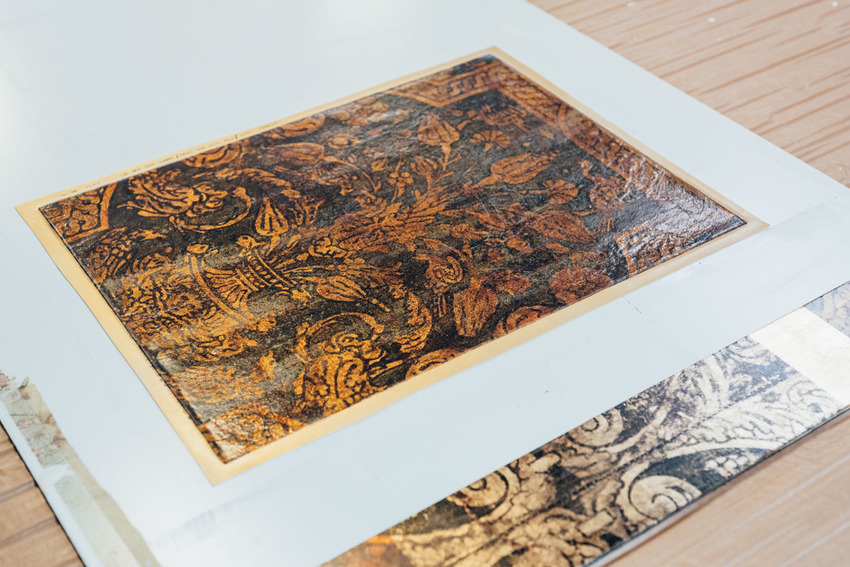 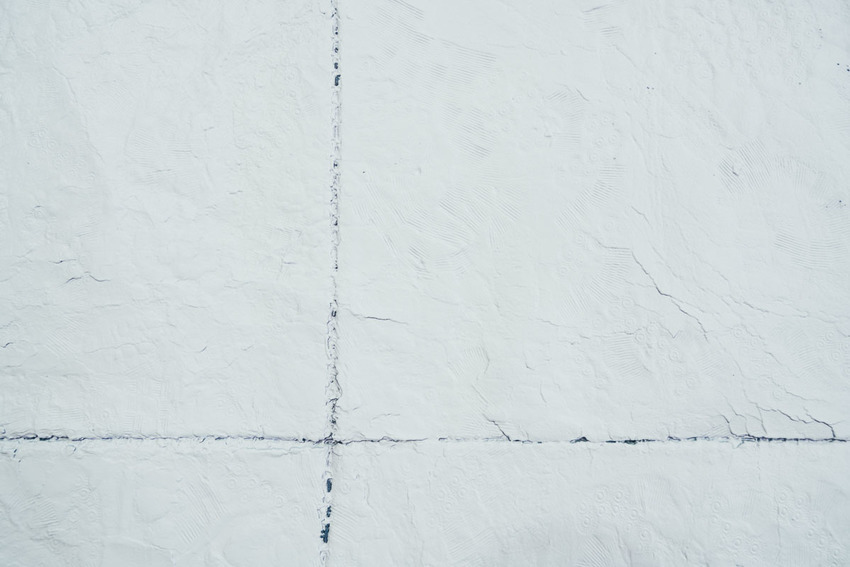 Elevated printed surface, showing one of the creases © Oak Taylor-Smith for Factum Arte 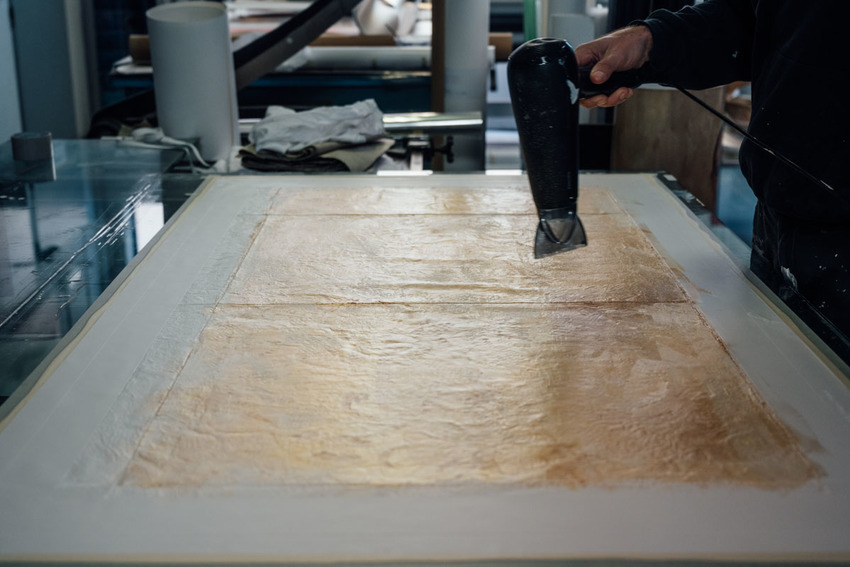 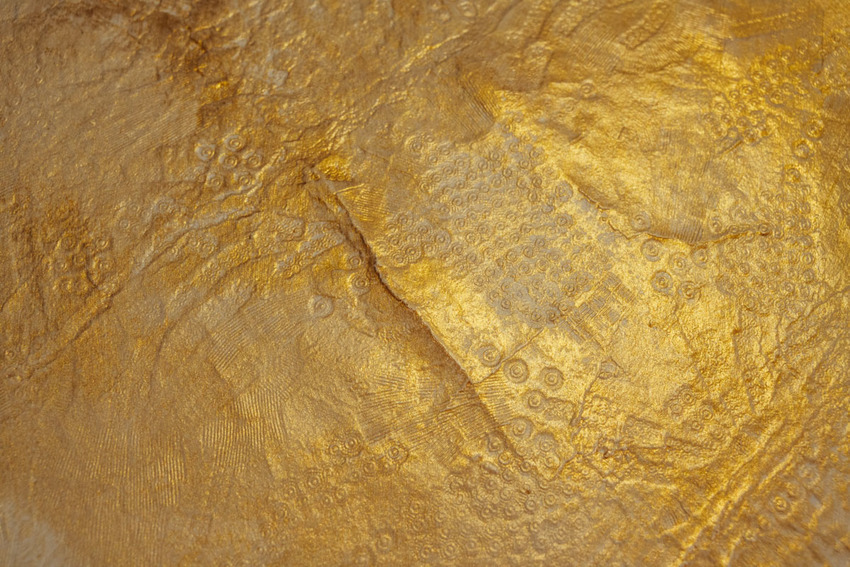 Detail of the gold layer © Oak Taylor-Smith for Factum Arte 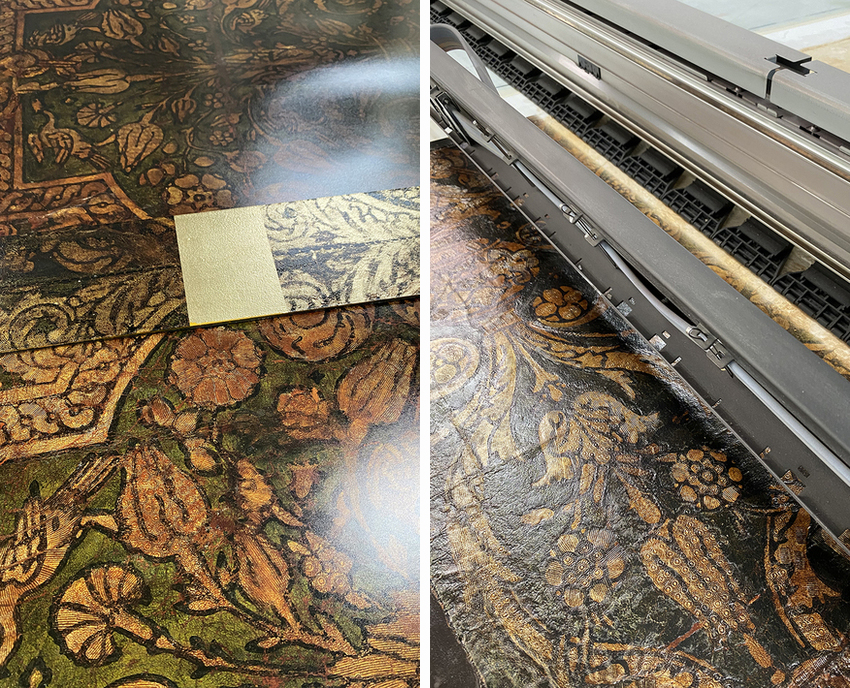 Printing of the colour © Adam Lowe 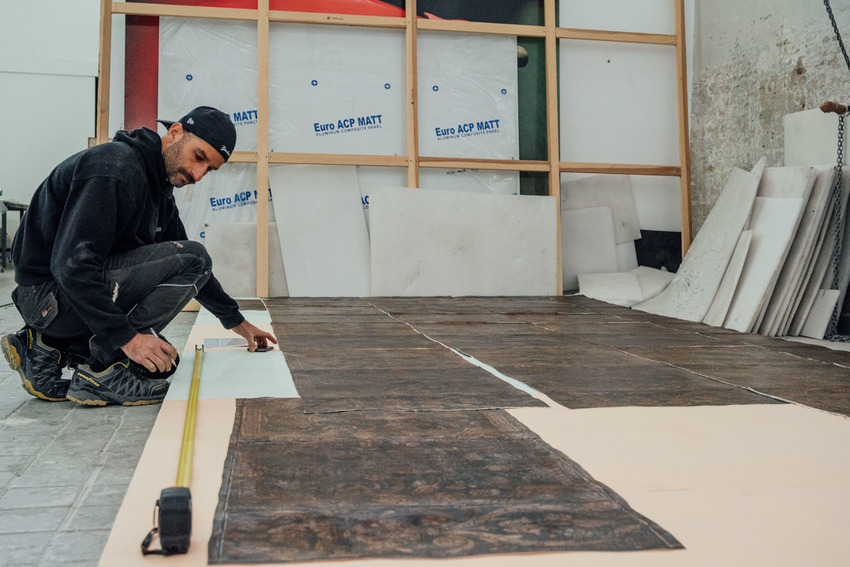 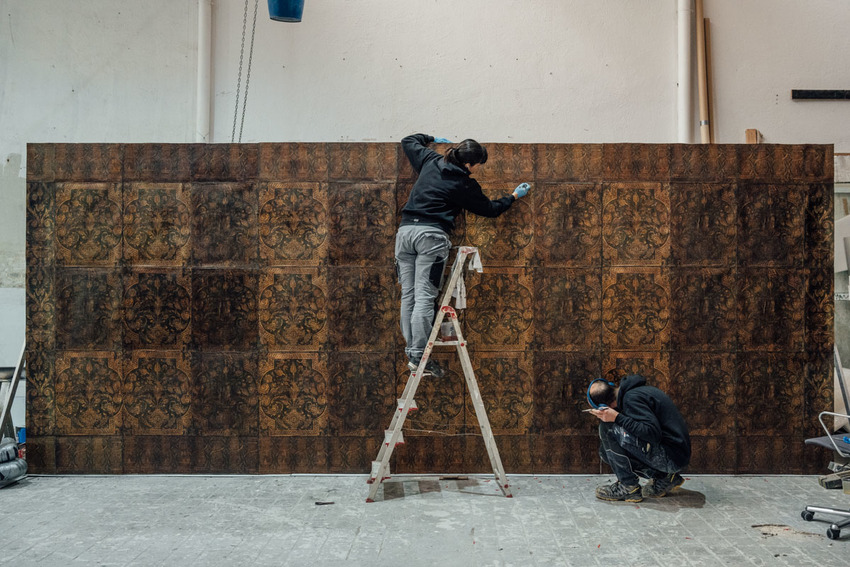 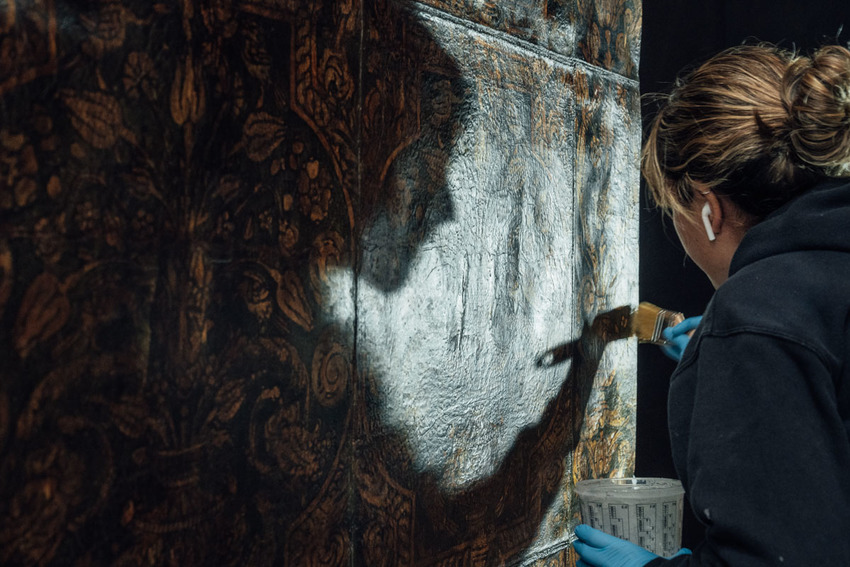 Detail of the finished recreation © Oak Taylor-Smith for Factum Arte 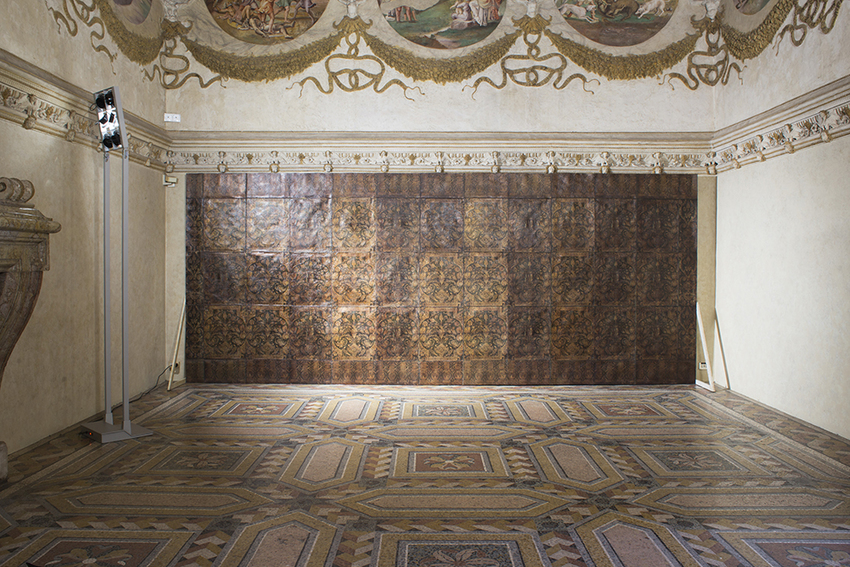