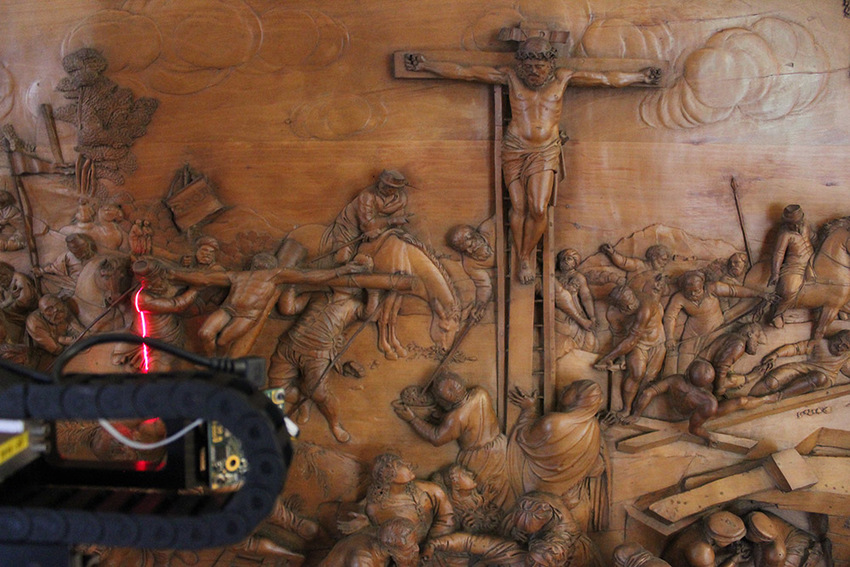 On occasion of the tercentenary from the death of 17th century master woodcarver and sculptor Grinling Gibbons, Factum Foundation was asked by the Grinling Gibbons Society to record in high resolution of a wood-carved Crucifixion within the collection of Dunham Massey, Cheshire, managed by the National Trust.

Grinling Gibbons’ Crucifixion after Tintoretto is a visibly complex object. Horses’ legs, the muscular arms of crucifixion functionaries, and a diverse array of heads, bottoms and elbows jut out into the foreground. The flowers which make up the frame are structured like lacework, supported on impossibly slim stems and half-concealing a net of voids (or 'undercuts') beneath the smooth exterior: points which the human viewer, no matter how hard they strain eyes and neck, will never quite get a grasp on.

To take on this challenge, Factum Foundation employed two complementary non-contact recording methods. First, the relief was recorded using photogrammetry – a method often used for sculptures and other objects in-the-round, which involves taking hundreds of photos of the object, capturing every curve and every plane in perfect focus from all possible angles. A specialist software, RealityCapture, was later used to process these photographs into a single 3D model. About 3400 photographs were necessary to capture Gibbons' Crucifixion. 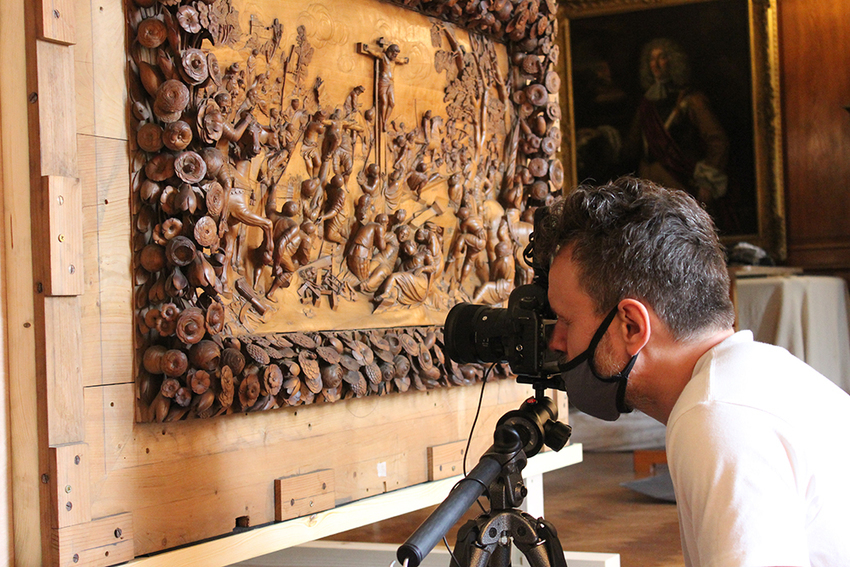 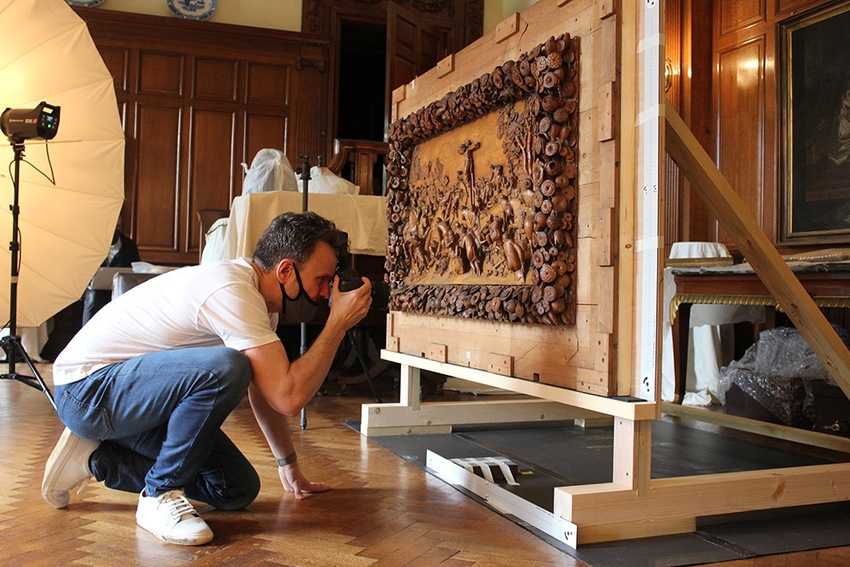 Following the photogrammetry, a second recording was undertaken using the Lucida 3D Scanner, a laser scanner designed by artist-engineer Manuel Franquelo and Factum Foundation. The scanner is usually used on paintings and other low-relief surfaces such as frescoed walls, and is capable of recording at extremely high resolution – accurate to 0.1mm. The Gibbons Crucifixion, however, has a much deeper relief and it was necessary to substantially modify the usual scanning method in order to record as much as possible of the surface of the work – sometimes recording the same patch of carving 4 or 5 times. 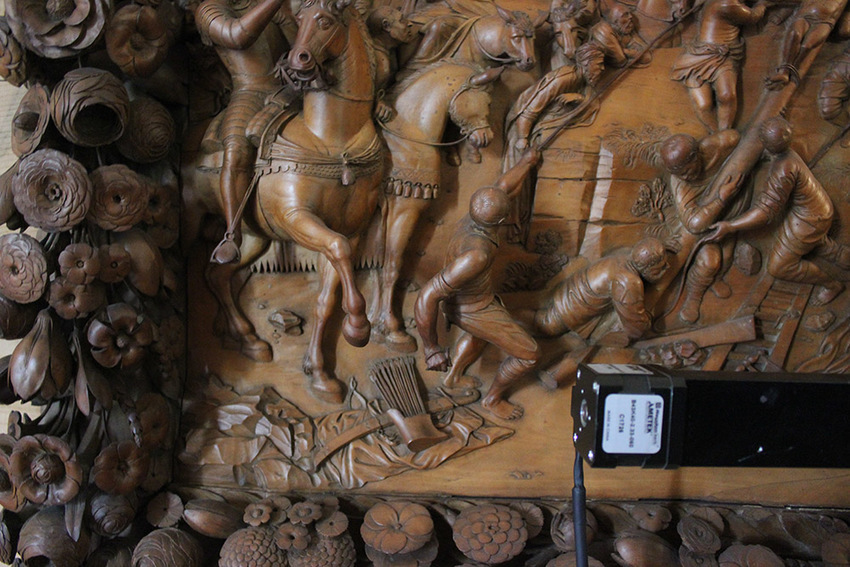 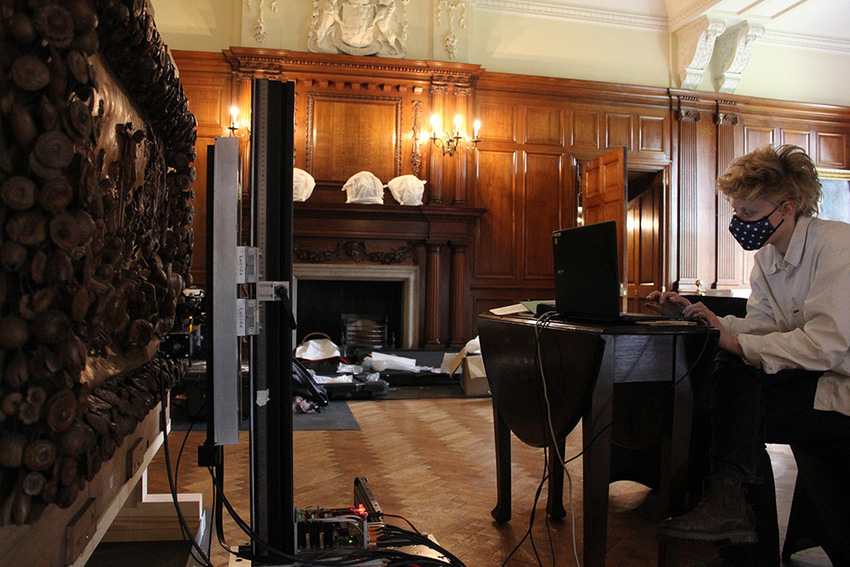 Back in Factum Foundation’s Madrid workshops, the data from the two different recording methods was first processed separately, and then meticulously merged together to create a single model using Global Mapper, a geographical information system, and ZBrush. The overall shape and dimensional accuracy of the photogrammetry recording were joined with the pinpoint surface accuracy of the Lucida 3D scanner. 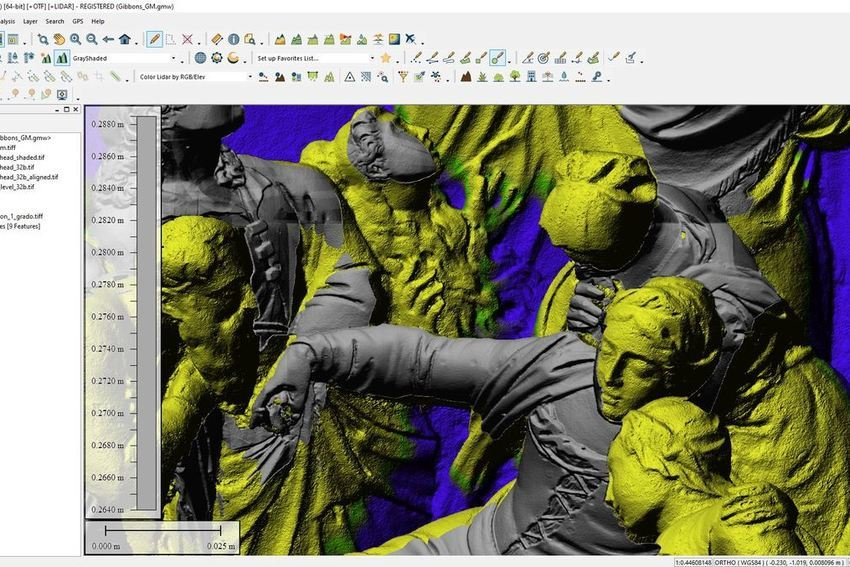 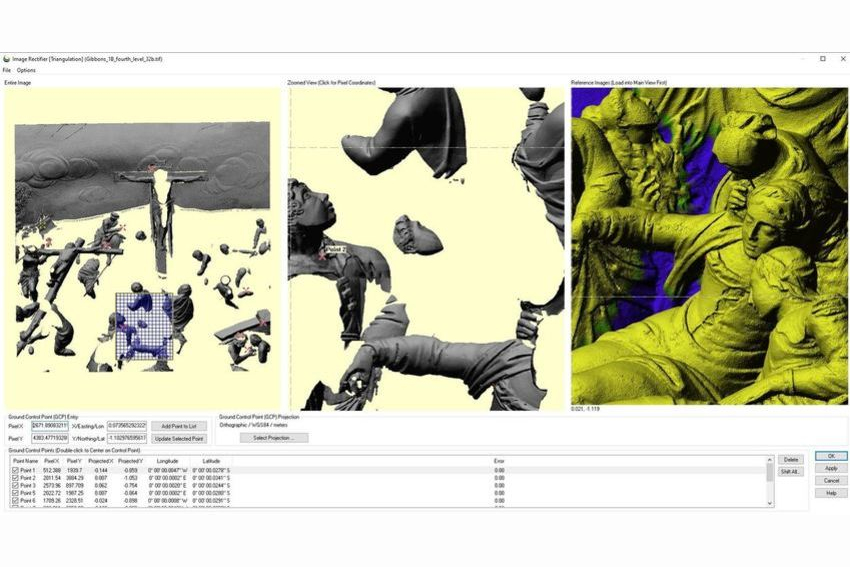 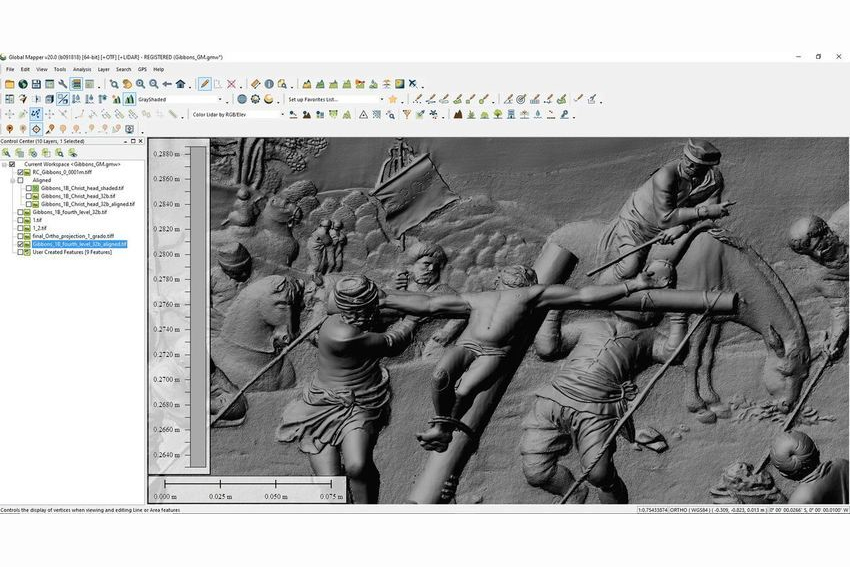 Due to the complexity of the surface, each dataset had to be processed separately before being merged © Factum Foundation 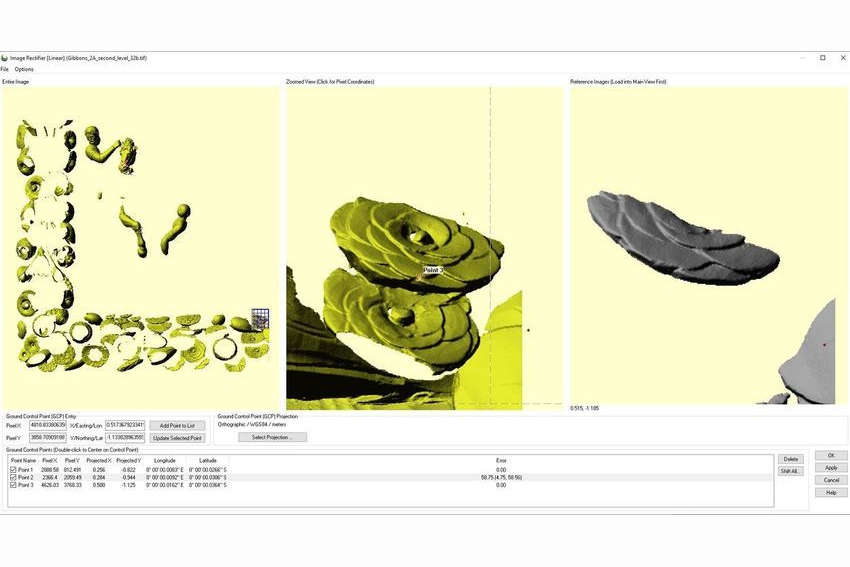 The model can be rotated and viewed from different angles in an online application, and zoomed in on to allow the surface texture of the lime-wood carving to be examined at close range.

This is a pioneering project for Factum Foundation – not just the first time these two data types have been merged to create a single model, but the first time such high-resolution data has been acquired for such a complex relief at this scale. The merging of the two datasets was deemed especially challenging due to the amount of small and complex surfaces over which the surface data from the Lucida had to be mapped by Factum's 3D sculptors.

The finished 3D model, complemented by a video detailing the processing at Factum Foundation, was on show at 'Grinling Gibbons: Centuries in the Making', organised by the Grinling Gibbons Society at Bonhams Bond Street, London (3 - 27 August, 2021) and at Compton Verney Art Gallery, Warwickshire (24 September, 2021 - 30 January, 2022). It is hoped that the 3D model will allow a much wider audience to examine and appreciate the details of this masterpiece of 17th century relief sculpture. 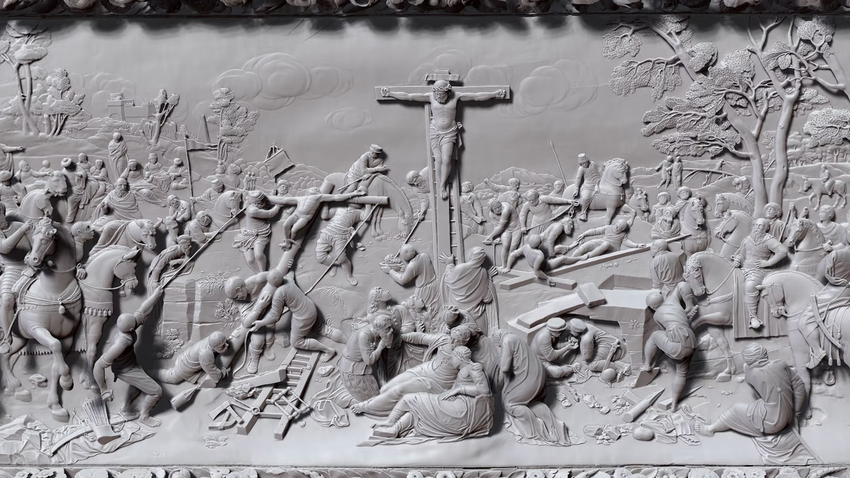