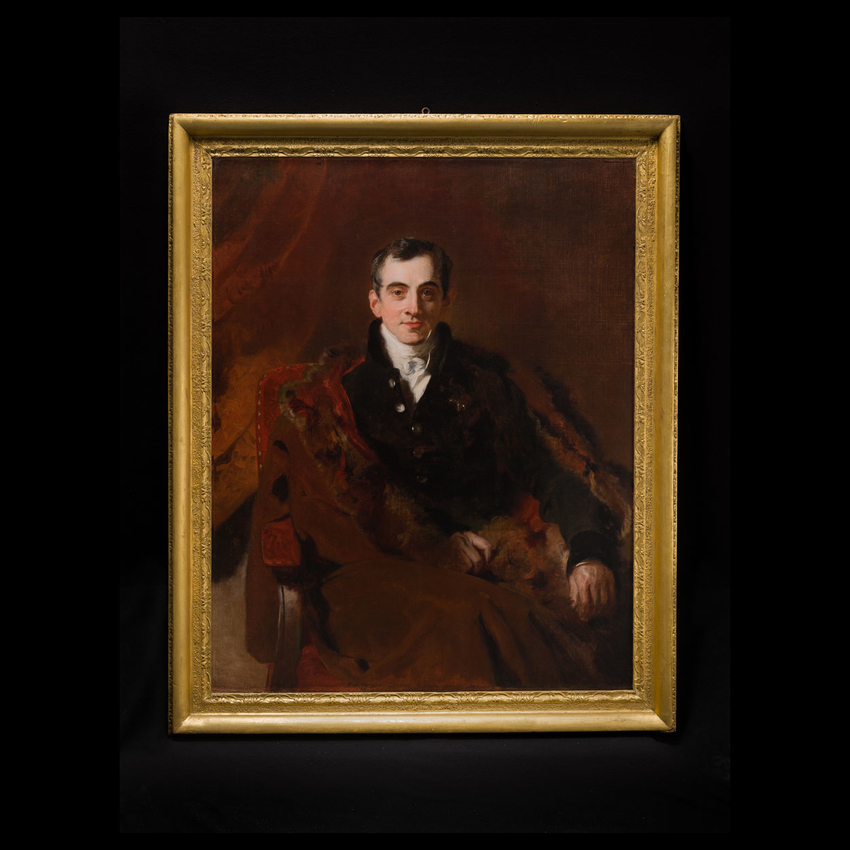 Facsimile of John, Count Capo d'Istria (1776-1831) by Sir Thomas Lawrence, made by Factum Arte and commissioned by the Rothschild Foundation to celebrate the 200th anniversary of the Greek War of Independence © Oak Taylor Smith for Factum Arte

In honour of the 200th anniversary of the formation of the Greek State, the Rothschild Foundation has commissioned a facsimile of Sir Thomas Lawrence’s portrait of John Capodistria, painted at the Congress of Vienna in 1818-19. The painting normally hangs in the Waterloo Chamber at Windsor Castle, and forms part of the Royal Collection, and sits in the company of other major figures who participated in the remoulding of post-Napoleonic Europe.

With the generous collaboration of Her Majesty Queen Elizabeth II and the Royal Collection, the portrait of John, Count Capo d'Istria (1776-1831) was recorded on 11th-12th and 19th August by a team from Factum Foundation at the Queen’s Gallery, Buckingham Palace, where it formed part of the Royal Collection exhibition ‘George IV Art and Spectacle’. It was then re-materialised as a facsimile in Factum’s Madrid studios. The facsimile was presented in an early nineteenth-century English gilt frame in the exhibition ‘1821 Before and After’ at the Benaki Museum (March 3rd - November 7th 2021). 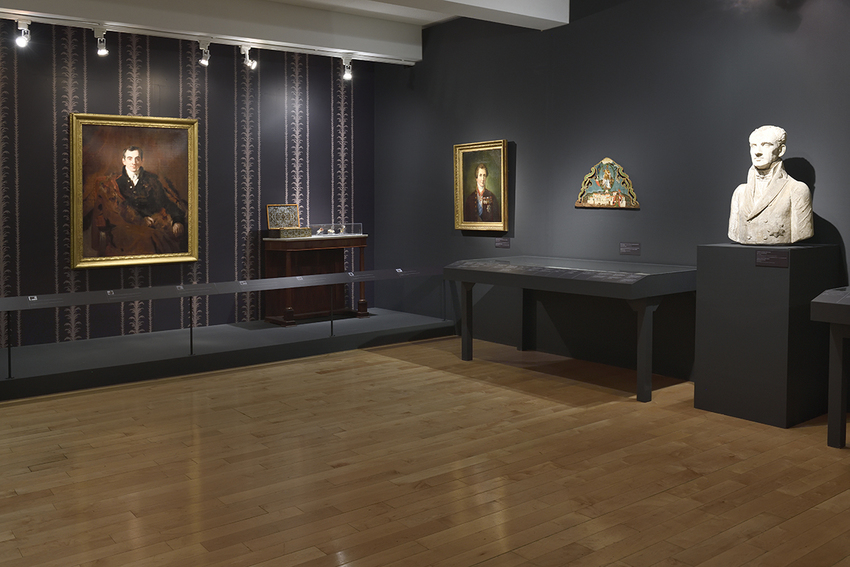 The facsimile installed in the exhibition © Benaki Museum

The painting, which measures 128.4 x 102.8 cm, was recorded in high resolution using the Lucida 3D scanner and panoramic colour photography. 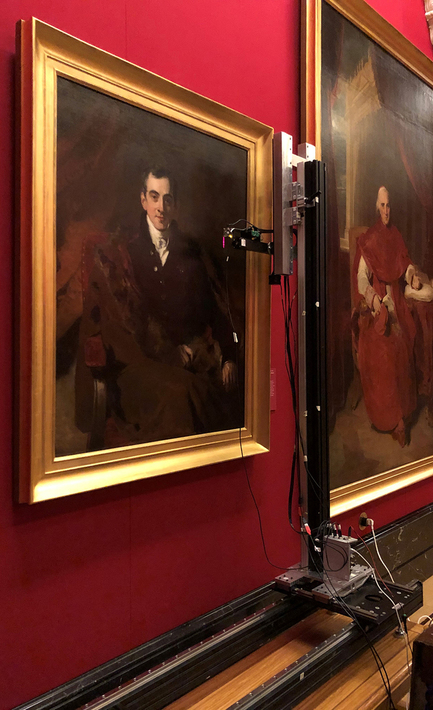 The Lucida 3D Scanner is a close-range, non-contact laser recording system that captures high-resolution surface data. It is used to record both paintings and bas-reliefs. The Lucida hardware and software were conceived and developed by artist and engineer Manuel Franquelo together with a team of specialists at Factum Arte and Factum Foundation.

Panoramic photography consists of taking over-lapping photos that are then stitched together at sub-pixel accuracy to create a composite image with resolution at 1:1 of about 600dpi. Factum has developed a protocol that ensures the objectivity and accuracy of the colour and tone.

In order to make the facsimile, the surface relief of the painting was prepared digitally and the 3D and colour files were stitched together and aligned with each other. These files were prepared for online viewing in real time. The digital data was then rematerialized, produced as a physical object using the elevated printing technology developed by Canon Production Printing (CPP), with whom Factum has collaborated over many years. Recent collaborations include the facsimile of Caravaggio’s Burial of Saint Lucy, Velazquez’s Old Woman Cooking Eggs and El Greco’s Portrait of Cardinal Tavera. The revolutionary elevated printing method is capable of building up a relief surface in 5-micron layers in order to replicate the exact surface of a painting. 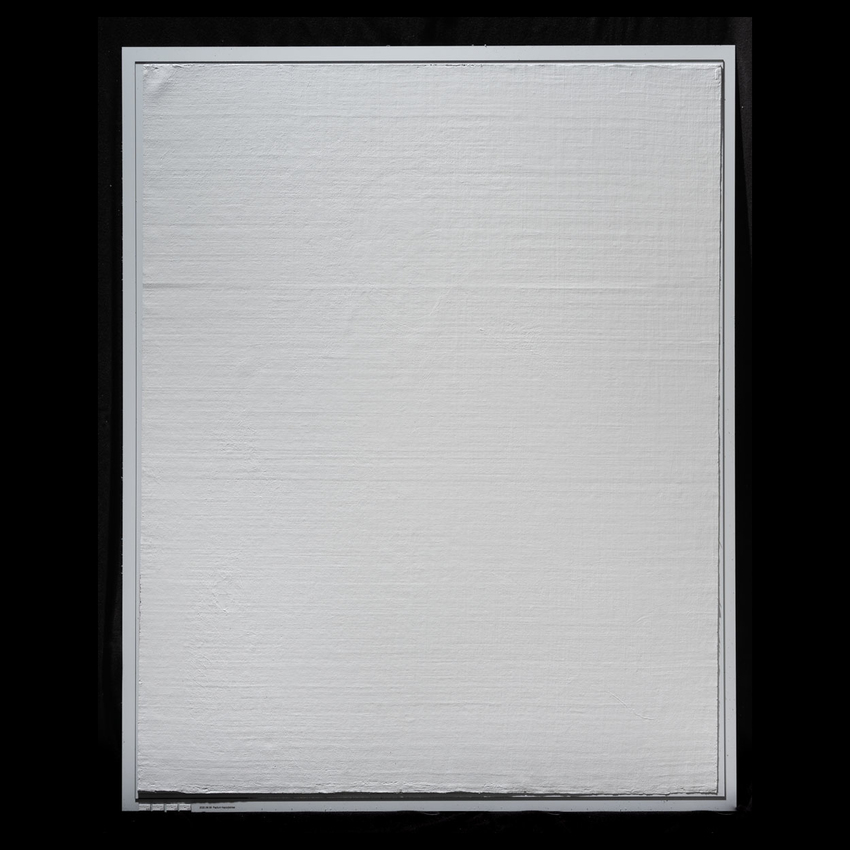 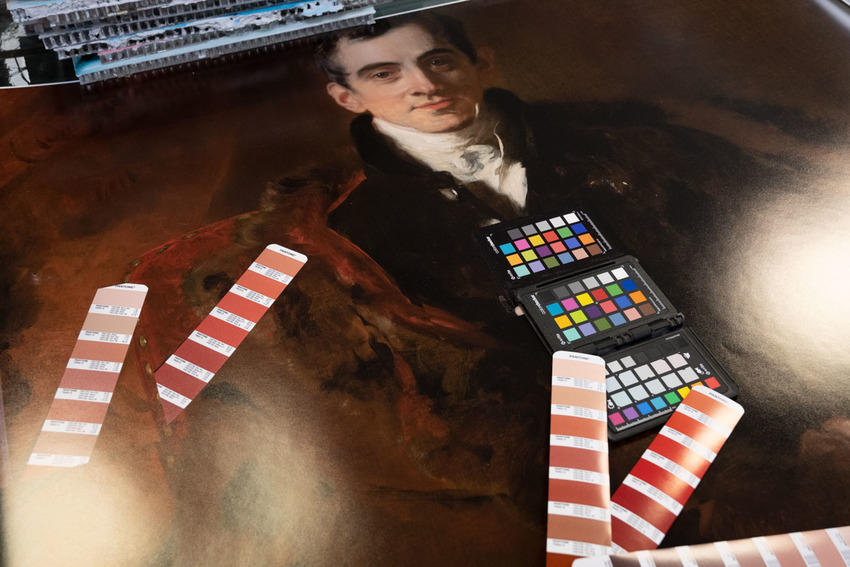 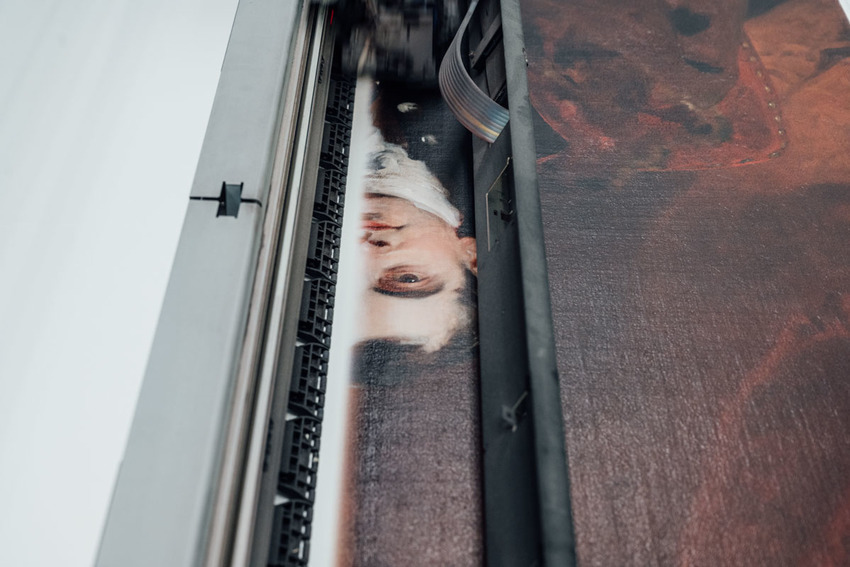 The colour layer of the Portrait of John, Count Capo d’Istria being printed over the 3D data by Factum’s custom flatbed printer, which is able to gradually build up tone and colour in perfect registration with the texturised surface © Oak Taylor-Smith for Factum Foundation 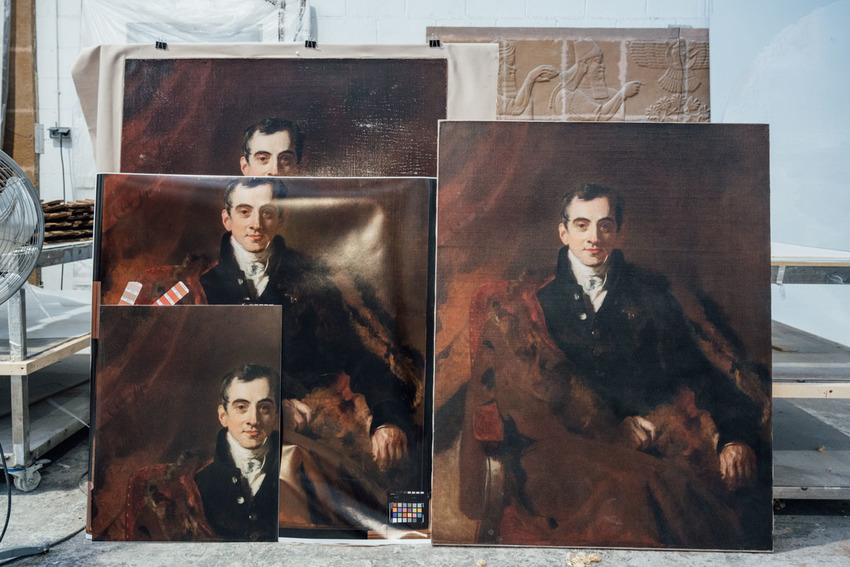 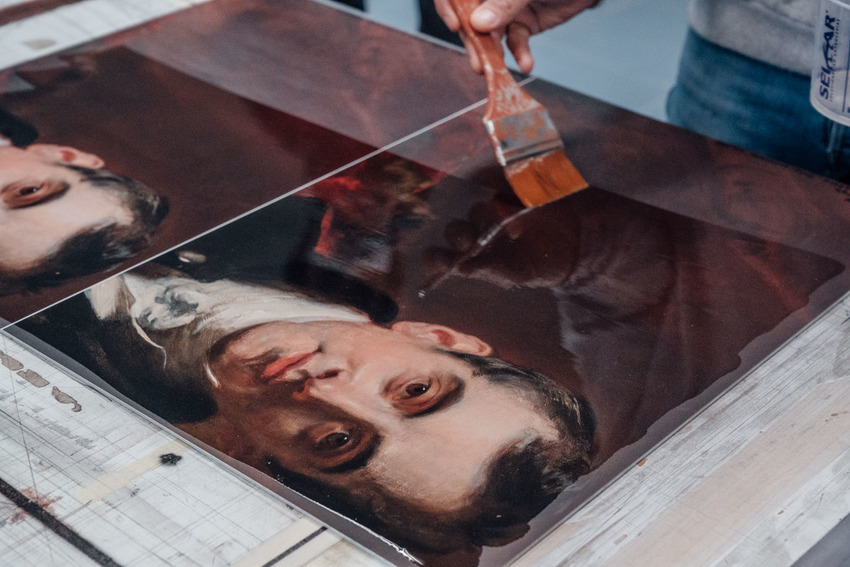 Varnishing of the printed surface © Oak Taylor-Smith for Factum Foundation 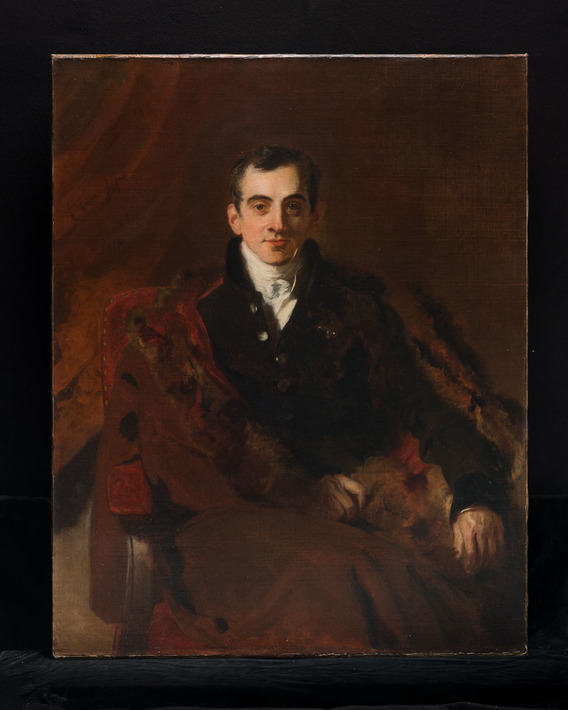 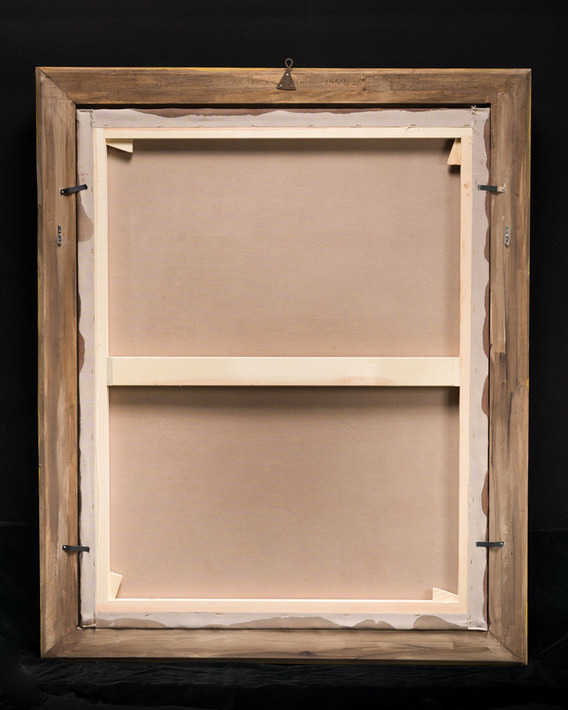 Back of the unframed facsimile © Oak Taylor-Smith for Factum Foundation

In Factum’s workshops, liquid silicon was then poured over the monochrome relief print to create a mould of its surface. A cast is then made from this mould using a specially prepared acrylic gesso mix. This ‘skin’ forms the surface of the final facsimile. It is prepared and printed in colour on Factum’s purpose-built colour printer.

Factum’s purpose-built flatbed printer has been designed in-house to print in multiple layers across large surfaces. Using a traditional method of registration, the colour and the relief are perfectly aligned, ensuring that the appearance of the facsimile is entirely faithful to the original. Multiple layers of over-printing ensure that the tone and hue of each colour corresponds precisely to the colour of the original. The finished print is finally fixed to a backing canvas using a process that is similar to re-lining a painting on canvas and stretched.

The final stage is varnishing and retouching the edges before framing.

The facsimile of John, Count Capo d’Istria (1776-1831) is on display at the Capodistrias Museum for an exhibition to celebrate the bicentenary of the Greek Revolution. 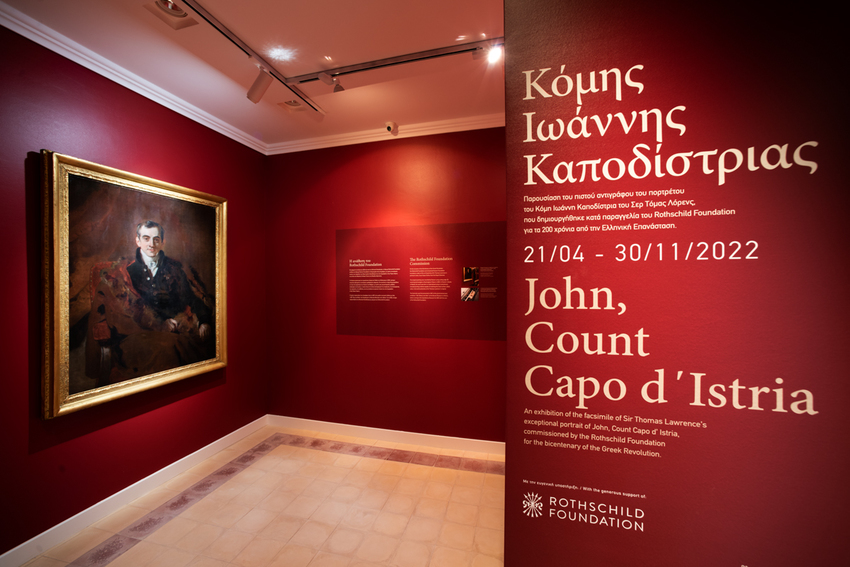