The recording and facsimile of Caravaggio's The Burial of St. Lucy 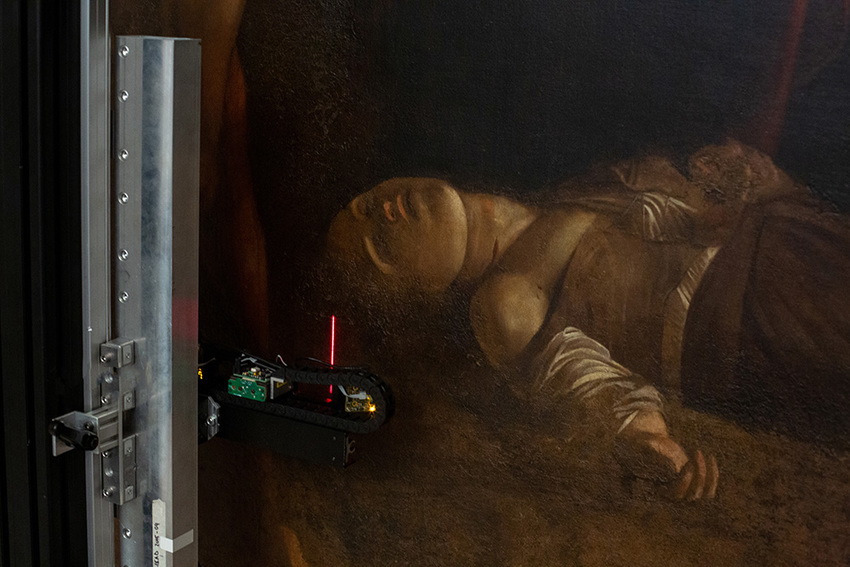 Factum Foundation is honoured to have carried out the recording of Caravaggio’s Burial of St. Lucy in the Chiesa di Santa Lucia alla Badia, Syracuse, between the 24th and the 30th of June 2020.

This large painting, which originally belonged to the Basilica di Santa Lucia al Sepolcro, was commissioned from Caravaggio during his stay in Syracuse. The painter fled Malta in 1608 after his expulsion from the Order of the Knights of Malta, arriving in Sicily in October of the same year. There, he was offered protection by the local Senate of Syracuse and given the prestigious commission to create an altarpiece dedicated to St. Lucy, the highly revered patron saint of the city.

The painting depicts the saint's entombment after her execution, which according to legend happened in Syracuse - where her body was allegedly kept in the city's catacombs. The work was probably unveiled during the celebrations dedicated to St. Lucy on December 13th and represents the first of Caravaggio's last series of paintings, produced on a whirlwind tour between Syracuse, Messina and Palermo before his departure from the island and death in 1610. 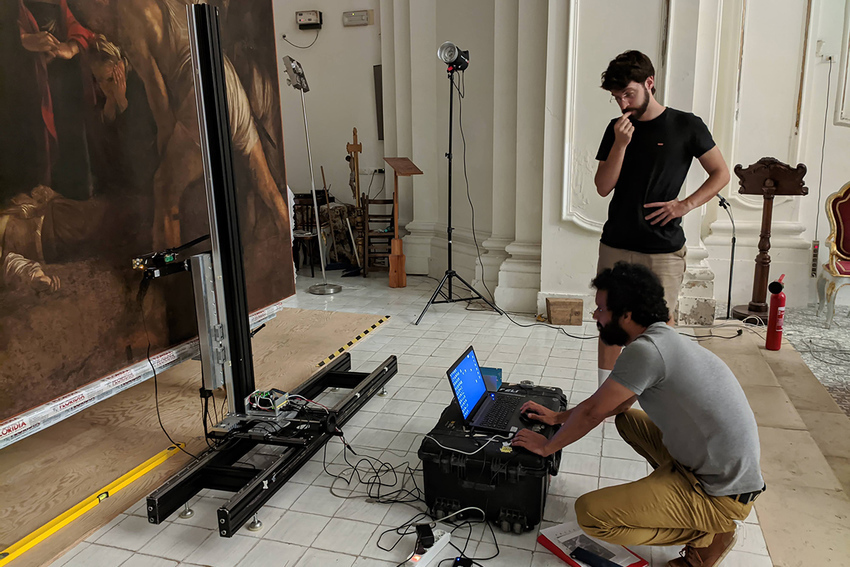 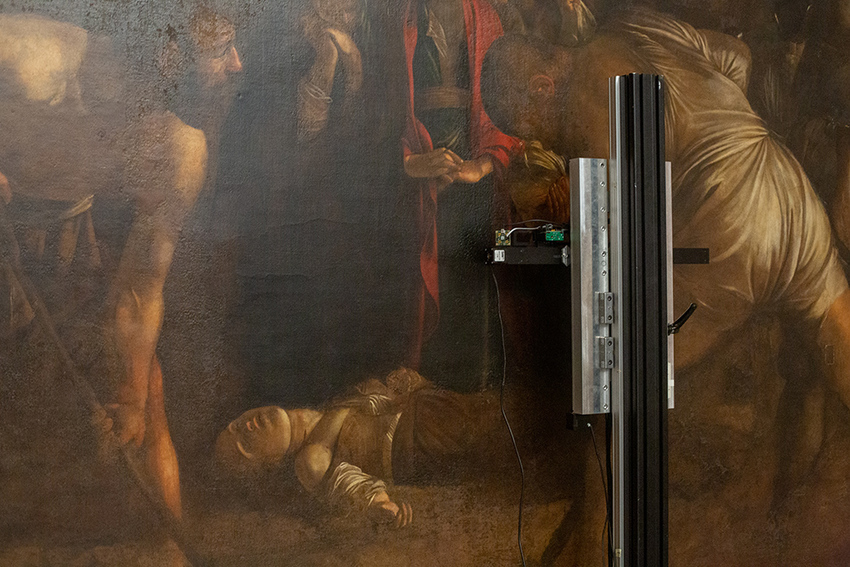 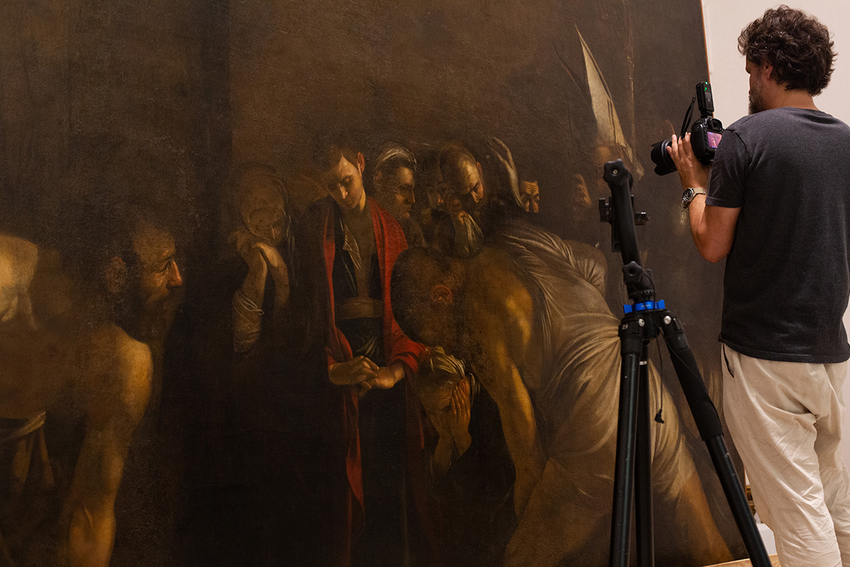 The painting, which measures 4.08 x 3 meters, was recorded in high resolution using the Lucida 3D scanner and panoramic colour photography. Permission to record was granted by the FEC (Fondo Edifici di Culto), to which the digital data will belong, and the recording was conducted at the request of the Mart - il Museo di arte moderna e contemporanea di Trento e Rovereto. 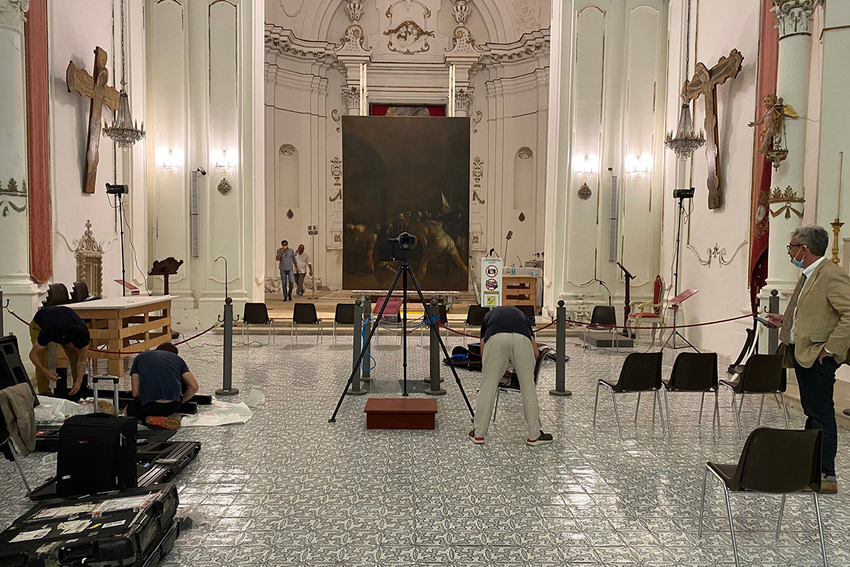 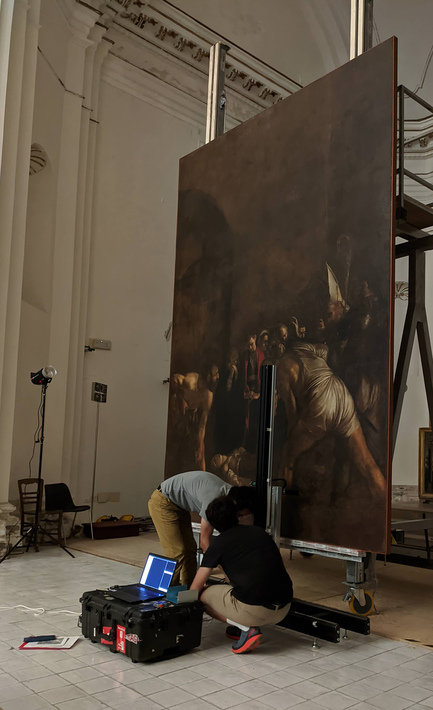 The painting was moved from its location on a scaffold, which allowed the Lucida 3D Scanner to operate at full height © Gabriel Scarpa for Factum Foundation © A video by Oscar Parasiego for Factum Arte

A facsimile of the Burial of St. Lucy was created by Factum Arte for the exhibition 'Caravaggio. The Contemporary' at Mart Rovereto (October 9th 2020 - April 5th 2021), where the original was on display among a selection of contemporary works and photographs, encouraging new conversations and emphasising Caravaggio's spiritual relevance.

In order to make the facsimile, the surface relief of the painting was first printed in 3D using the elevated printing technology developed by Canon Production Printing, a Canon company with whom Factum has collaborated on many projects. CPP’s revolutionary printing method involves building up relief in 5-micron layers to replicate the exact surface of a painting.

In Factum’s workshops, liquid silicon was then poured over the relief print to create a mould of its surface. A cast was made from this mould using a specially prepared acrylic gesso mix. This ‘skin’, which forms the base surface of the final facsimile, was fixed to a backing canvas in a process that is similar to re-lining a painting.

Factum’s purpose-built flatbed printer has been designed in-house to print in multiple layers across large surfaces. Using a traditional method of registration, the colour and the relief are perfectly aligned, ensuring that the appearance of the facsimile is entirely faithful to the original. Multiple layers of over-printing ensure that the tone and hue of each colour corresponds precisely to the colour of the original. The final stage is varnishing and hand finishing.

A second facsimile of Caravaggio's Burial of St. Lucy was also made for the Church of Santa Lucia alla Badia. On December 4th 2020, the original painting was brought back to Syracuse and installed in the location for which it was created, the Basilica of Santa Lucia al Sepolcro. 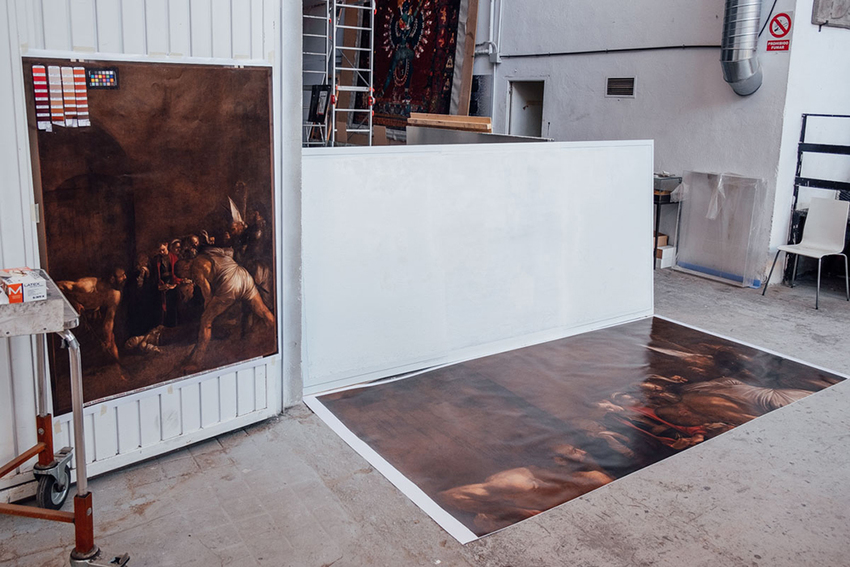 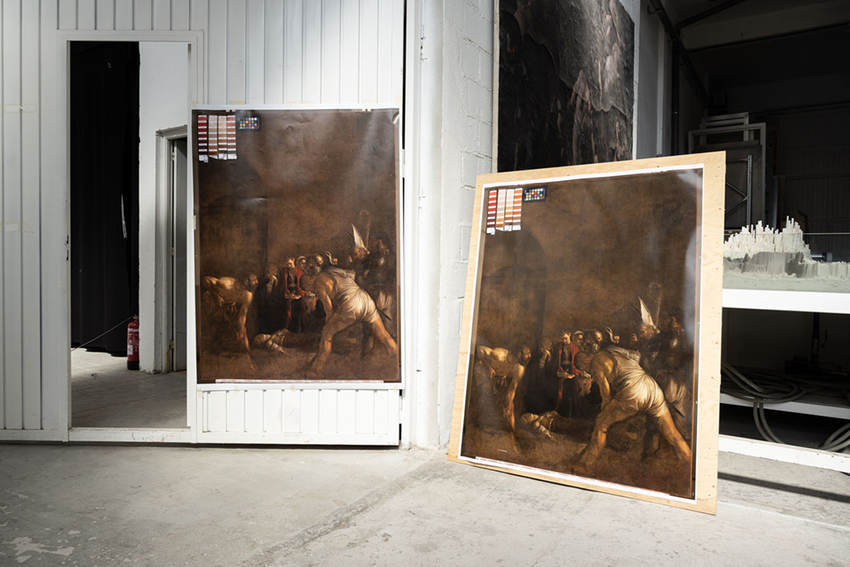 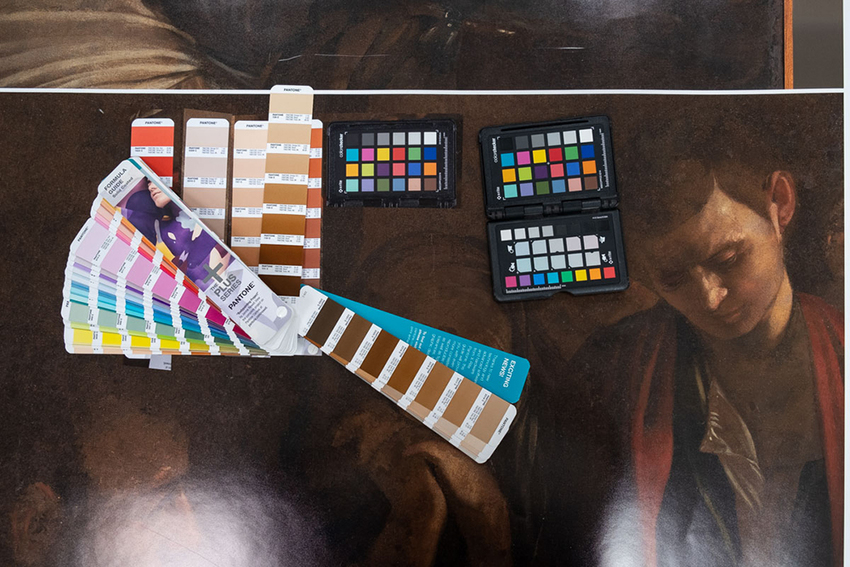 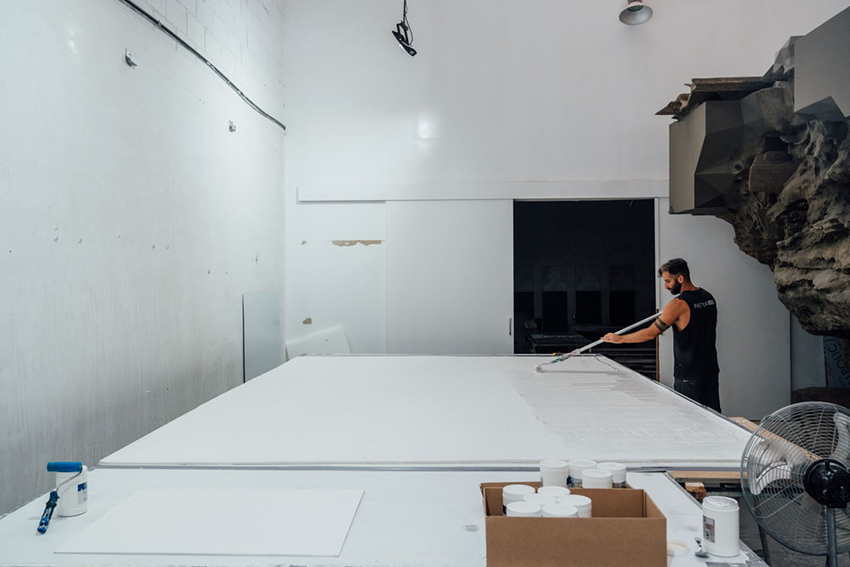 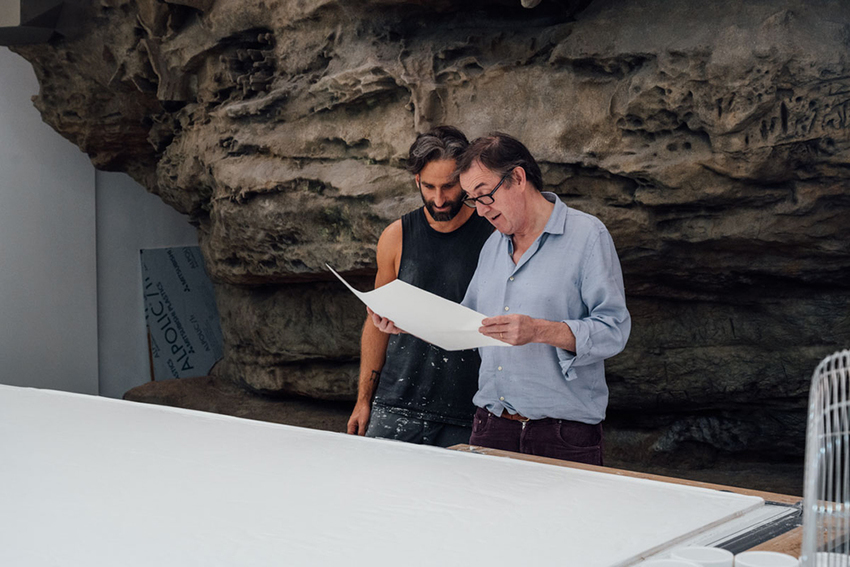 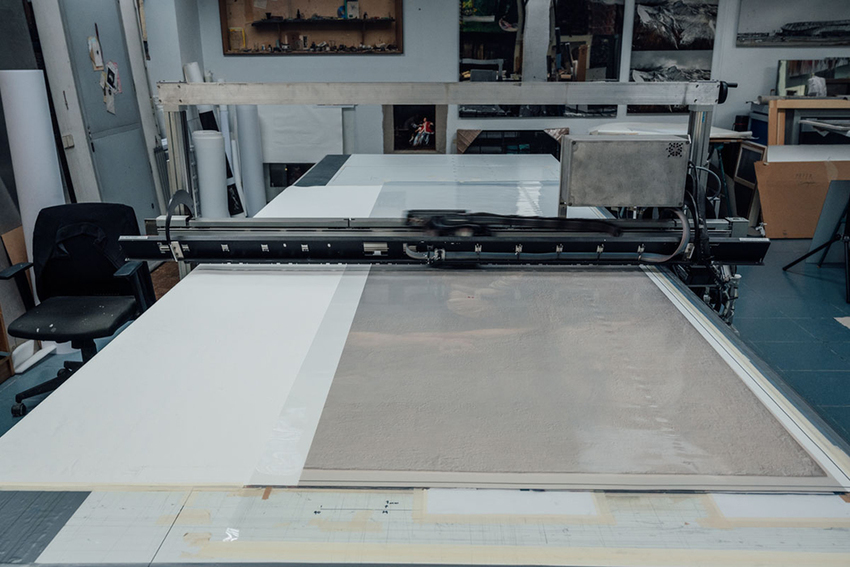 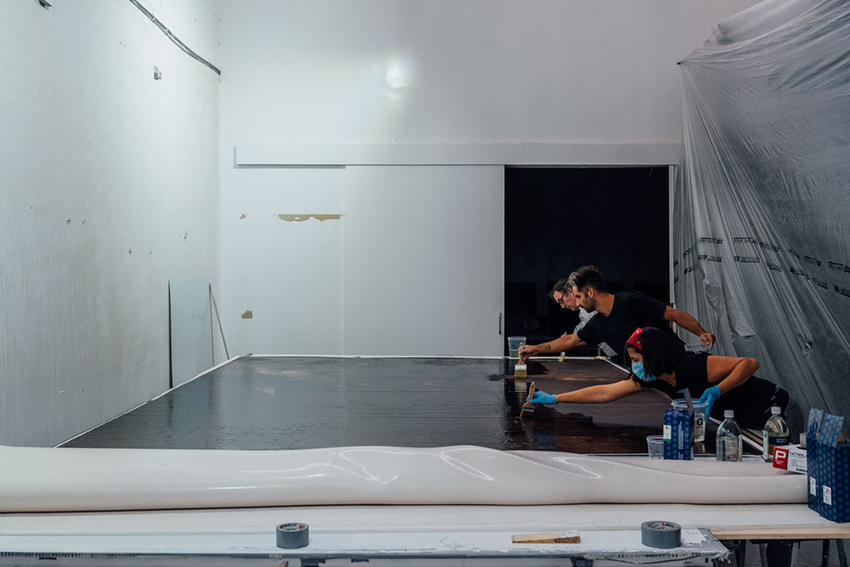 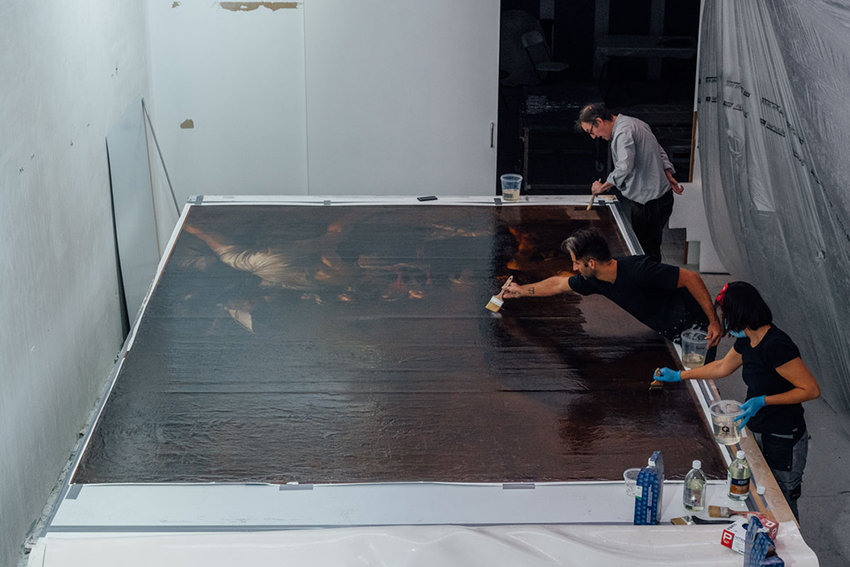 The original and the facsimile in the exhibition. Neither is identified as the original or copy © Charlotte Skene Catling for Factum Arte With many thanks to: FEC (Fondo Edifici di Culto), Vittorio Sgarbi, Peter Glidewell