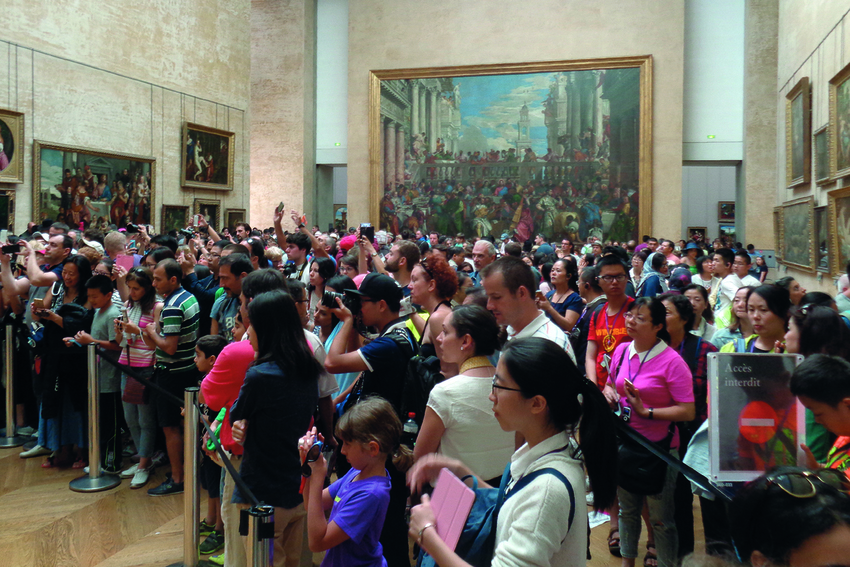 The crowd at the Louvre, with Veronese's Wedding at Cana on the far back © Factum Foundation

'We have all become profoundly more digital over the last weeks. We are ready to live a digitally changed life, and digital change is rushing into the heritage and museum world too. This is not a matter of some slightly cleverer didactic material or off-site experiences, but the material itself of the works of art and monuments, their presence or absence, their uniqueness, their very survival.'
- Anna Somers Cocks, Founder editor, The Art Newspaper
Read the full article

Before Covid-19, 15 million people visited the Forbidden City every year; every day tourists packed into the Sistine Chapel, and crowds jostled in front of the Mona Lisa. What will happen now to museums and heritage sites? Will we see changes over the coming months and years to the ways in which we share, enjoy and learn from the material evidence of the past? What role will technology play in allowing access to collections and keeping attention focused on vulnerable heritage from across the world?

At a time when we are all being forced to think hard about what we value, how, and why, Factum Foundation and The Art Newspaper have launched a series of discussions on the role of digital technologies in the preservation of cultural heritage.

The three, 80-minute, online discussions brought together contributors to Factum Foundation’s new book, The Aura in The Age of Digital Materiality – Rethinking Preservation in the Shadow of an Uncertain Future, with other experts from a wide range of disciplinary backgrounds. The discussions considered the increasing prominence of high-resolution recordings of cultural heritage and their place in the display spaces of the present and the future.

The discussions focused on the potential of new technology to influence the nature of access, ownership and understanding while addressing fundamental questions about originality and authenticity, relics and replicas, context and movement.

During the discussion questions were gathered from the online audience. Everyone asking a question was invited to provide a few words about their involvement in heritage preservation and their areas of interest.

Each panel was recorded and will remain online and available to all.

The aim is to raise the level of knowledge in this area, and to make the discussion available to anyone interested in how, in the shadow of the Covid-19 crisis, new technologies have the potential to transform the way we preserve, document, monitor, study, re-create, disseminate, share and display the world’s cultural heritage.

You can read the article on the panel highlights, written by Anna Somers Cocks, here.

"Museums must not be Renaissance palaces with the common folk tilling the fields outside."
- Bonnie Greer, playwright, author and critic, former Trustee of the British Museum
About The Aura in the Age of Digital Materiality

Factum Foundation’s book The Aura in the Age of Digital Materiality (Silvana Editoriale, 2020) was intended to accompany the opening of La Riscoperta di un Capolavoro (The Revealed Masterpiece) and La Materialità dell’ Aura, originally scheduled to run from March 12 until June 28, 2020 at Palazzo Fava in Bologna. Unfortunately, the exhibitions were closed due to the Covid-19 situation in Italy.

Discussion 1 - 1 May 2020
THE FUTURE OF MUSEUMS, EXHIBITIONS AND THE OBJECTS THEY DISPLAY
Rethinking the role and value of culture in the shadow of an uncertain future

The role of the museum as a repository of physical objects that give access to collective memory is changing. New digital recording technologies that, among other things, allow exact facsimiles to be made, are providing access to a global audience, while new display technologies are inviting us to look at the nature of the object with new eyes. This panel discusses the purpose of a museum, its role, what should it show, how and to whom. It will look at the way technology is making a ‘museum without walls’ possible and realigning the relationship between the original and the authentic. Is the “aura” of originality now an obsession that is constraining what can be displayed, how it can be seen and how it can be effectively preserved.

Discussion 2 - 2 May 2020
THE CIRCULATION OF OBJECTS: THE POLITICS OF RECORDING, TRAINING, PRESERVING AND SHARING
Creating a cultural economy based on sharing skills, technologies and knowledge

For museums and other cultural heritage institutions, digital technologies open up unprecedented possibilities for sharing and collaboration, but they also give rise to new responsibilities. This panel asks how the international heritage community can best work to create accurate records and share both objects and knowledge with audiences across the world.

Discussion 3 - 3 May 2020
AN INTIMACY WITH THE PHYSICAL WORLD: NEW TECHNOLOGIES GENERATING NEW KNOWLEDGE
Compiling, analysing, presenting information in an age of machine learning

This discussion focuses on the technologies that are creating new knowledge about cultural heritage – on where we are now, and where we go next. Among the subjects to be discussed are new possibilities for image and information analysis, new technologies of display, and the problem of long-term digital archiving.

An initiative of Factum Foundation and The Art Newspaper, with Il Giornale dell’Arte.