Sculpted by Amico Aspertini and his workshop between 1526 and 1530, the lunette tableau above the right-hand portico of the façade of San Petronio shows either Joseph of Arimathea or Nicodemus lowering Christ into the tomb while the two Marys lament to either side. Famously described by Vasari as ‘an eccentric man of extravagant brain, whose figures… are equally eccentric and even mad’, Aspertini (1474–1552) was a skilled and prolific painter and sculptor; Vasari writes that ‘there is no church or street in Bologna which has not some daub by the hand of this master’. 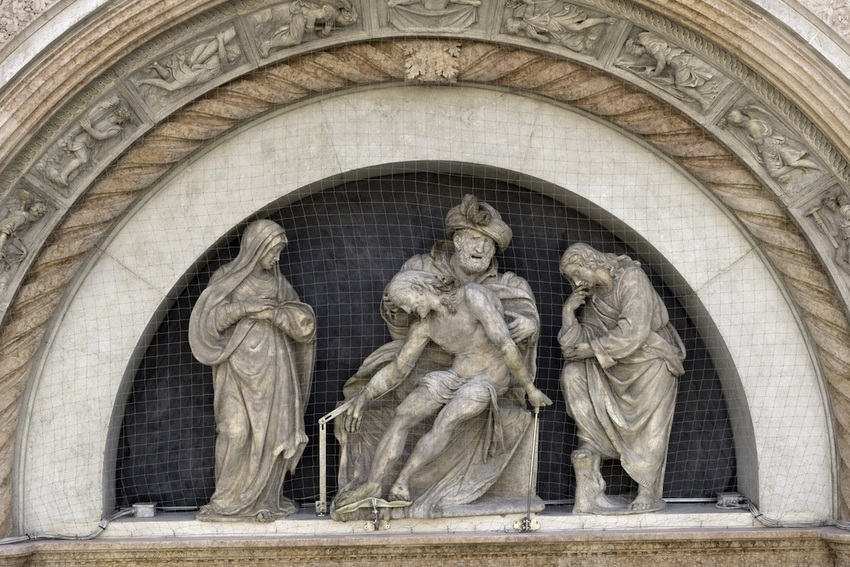 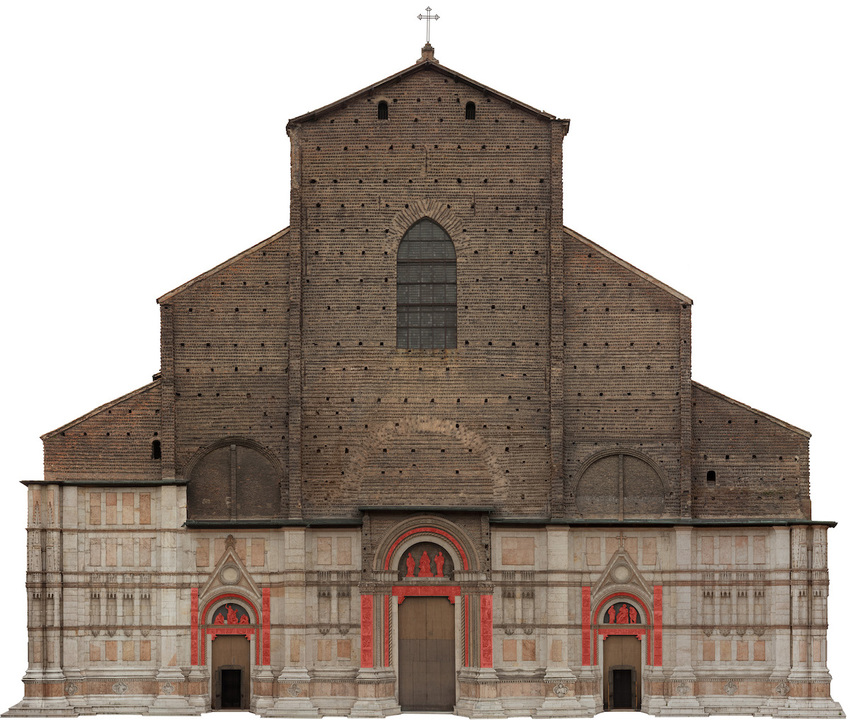 Image of the façade with scanned areas in red © Factum Foundation

The tableau from San Petronio brings out both the agony and the compassion of the Deposition: while Joseph tenderly supports the slumped corpse, his expression is one of deep distress, and even the expression of the dead Christ retains something of the pain of crucifixion. The two Marys offer a further division of response: Mary Magdalen is hunched over in grief, her eyes turned away from the sight of the entombment, but Mary the mother of Christ stands straight, looking directly and serenely at the figure of her son. Where Niccolò dell’Arca in around 1463 had presented female members of a pietà scene as the agonised descendants of classical Furies or Niobids, here it is the male figures who are most demonstrative in their anguish, with the female mourners subdued by contrast.

By 2010, when the team from Factum Foundation undertook to scan the three doors on the unfinished façade as part of a larger restoration scheme directed by Cavina Terra Architetti (and carried out by the Opificio delle Pietre Dure and the restoration firm Leonardo), the central group of Joseph and Jesus was in a state of extreme fragility. Sections of the marble had denatured and dissolved as a result of time and exposure, a process probably accelerated by modern airborne pollutants and acid rain, and the arms of Jesus in particular, projecting from the main bulk of the statue, were in need of significant consolidation work. 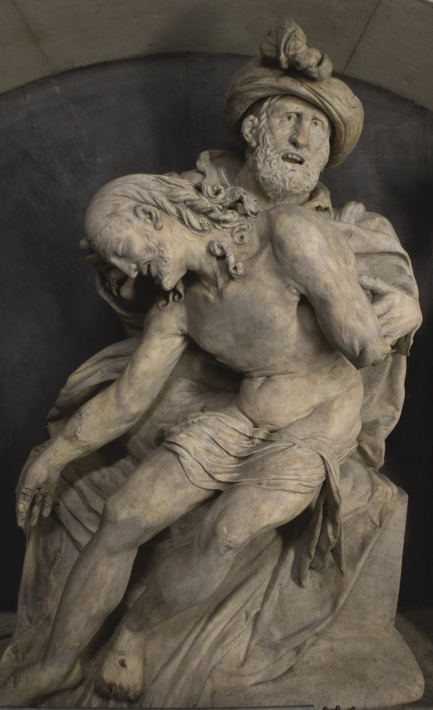 Nicodemus, or Joseph of Arimathea, lowering the body of Christ into the tomb © Factum Foundation 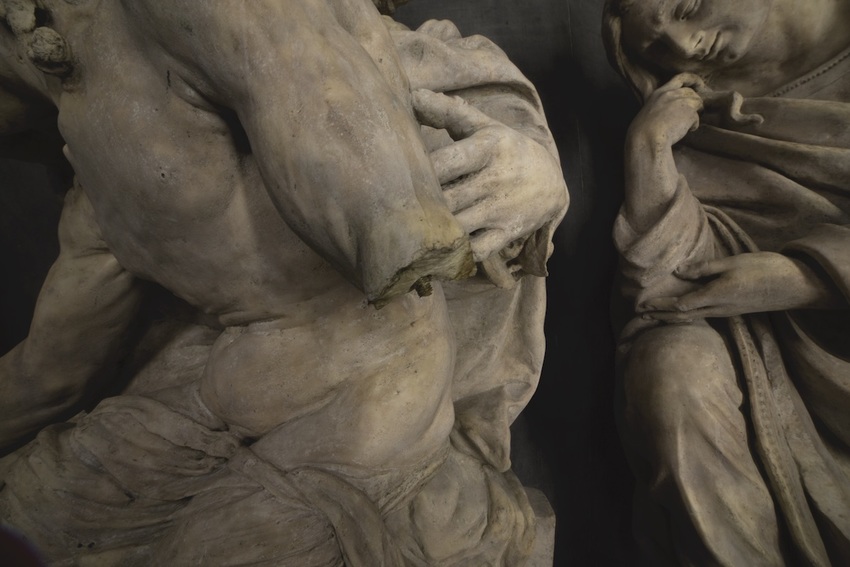 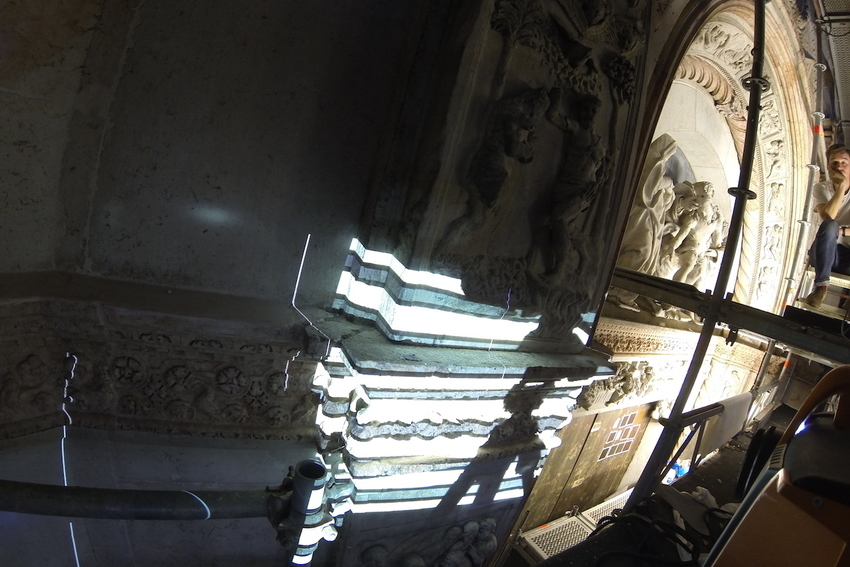 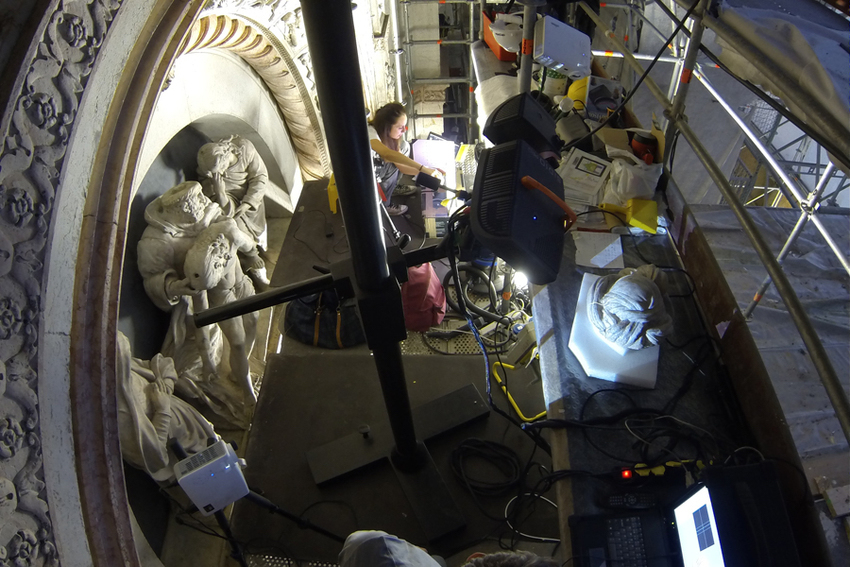 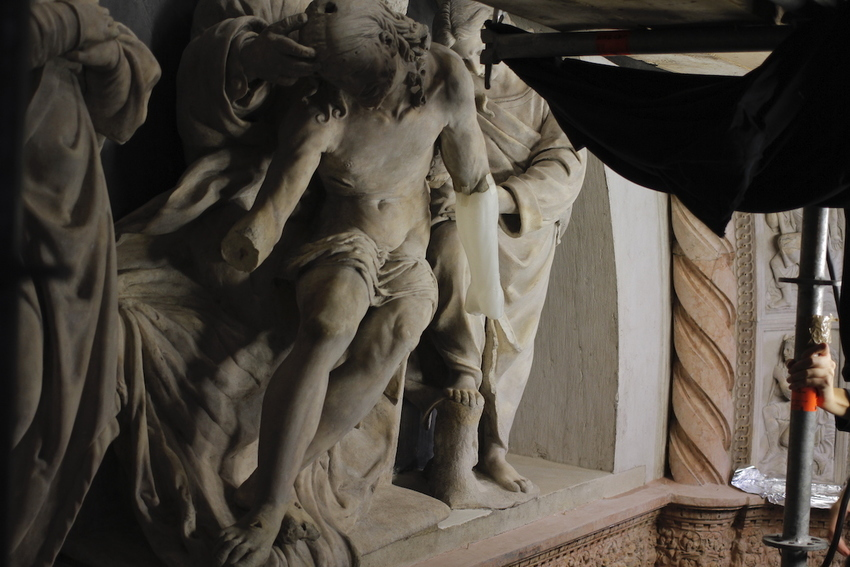 Given these circumstances, there was extensive discussion at this time as to whether the most deteriorated statues of the façade should be left in situ or whether they should be brought down from the façade and exhibited in a museum setting within the church complex. This latter solution would have allowed the sculptures to be seen up close and at eye-level in a far more controlled setting, with facsimiles or copies replacing the originals on the front of the Basilica. The Opificio delle Pietre Dure ultimately decided to preserve Aspertini’s original sculptures in situ. But the use of copies, far from being radical, is one which has long been used in church restoration schemes and is deeply embedded in historical practice – one thinks, for example, of the replicas of the horses from Constantinople that now occupy the place of the fragile originals on the loggia of San Marco in Venice, or of Viollet-le-Duc replacing the damaged 13th-century sculptures of the kings of Judah in Notre Dame, decapitated during the French Revolution.

During cleaning it was decided to remove previous restorations from the left arm of Jesus in order to safeguard the group, leading to a further difficult decision: whether to replace the deteriorating stone with a lightweight facsimile, which would place less stress on the fragile upper arm, or whether to reattach the original using a metal pin which would add to the stress on the marble. Scans made by Factum (using a NUB3D Sidio Pro 3D Scanner, with additional data provided by a Breuckmann Smartscan 3D) provided the restorers with detailed information to aid them in making this decision. The original arm was carefully removed and a ‘prosthetic’ acrylic resin arm was made and tested, but a collective decision was ultimately made by the restoration teams to keep the original sculpture on display. This involved reattaching the arm with a visible metal support structure – a solution that, although it avoids the stress which would have been caused by a single pin, remains aesthetically awkward. 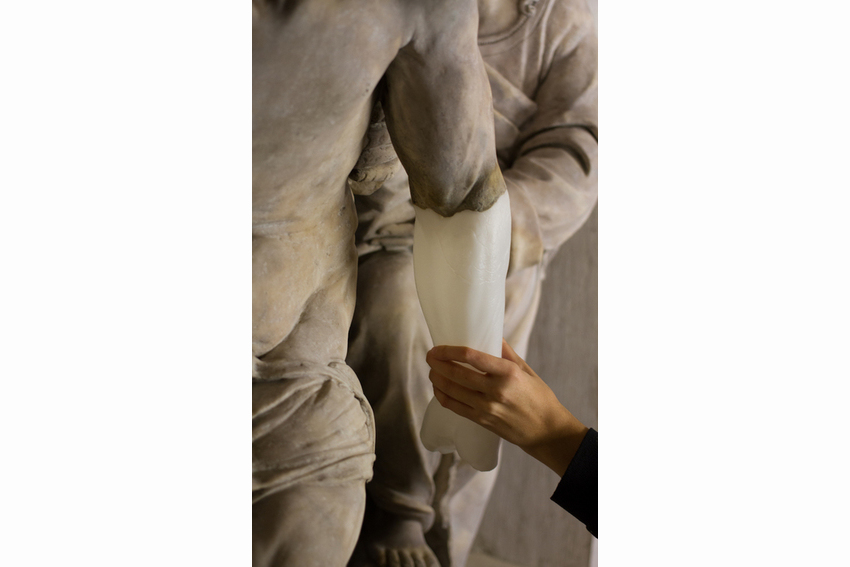 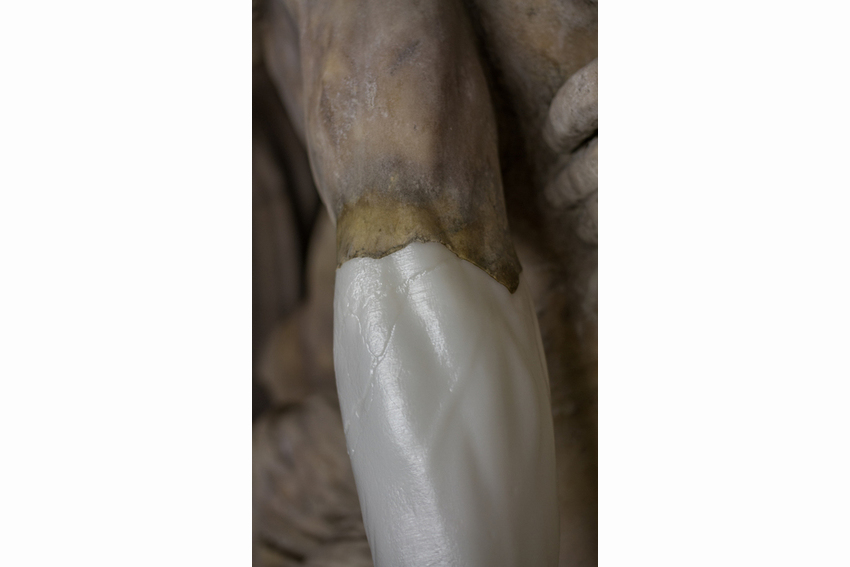 Render of the two parts of the arm, digitally reintegrated © Factum Foundation 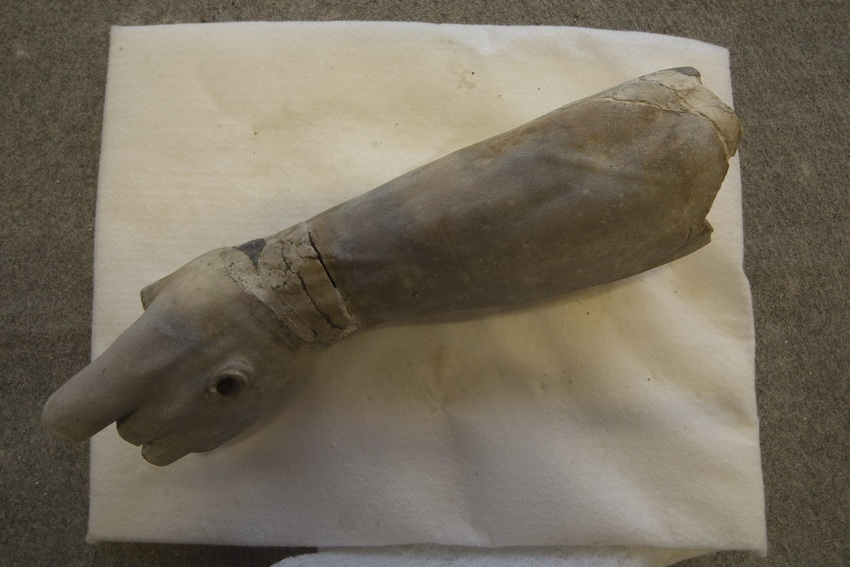 The scan data turned out to be important for condition monitoring sooner than expected. During the restoration process the right arm of Christ also broke as a result of the weakness of the stone, resulting in damage to the hand and fingers. Fortunately, as scanning had been carried out before the breakage, the data could be used to inform the reconstruction, and the restored arm was also replaced using a metal exoskeleton. Although the main aim of the recording was to create an accurate report for monitoring the condition of the sculptures, the scan data will also provide future restorers with a firm basis from which to replace the damaged original arms with digitally restored facsimiles should they ever wish to do so. 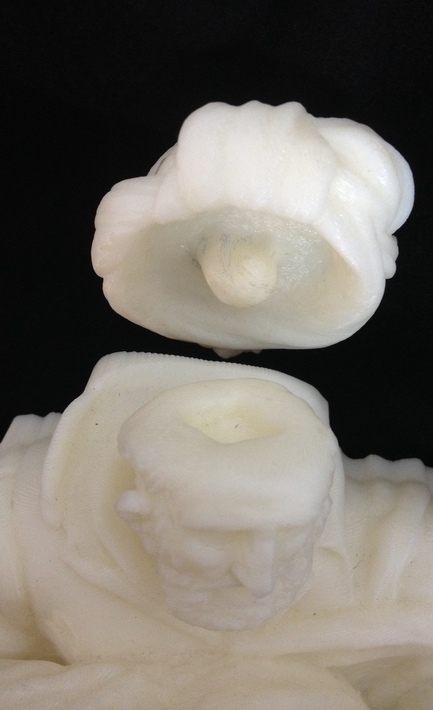 3D-printed model of Nicodemus/Joseph of Arimathea, showing the relationship between turban and head © Factum Foundation

As Amico Aspertini’s Deposition clearly illustrates, the state of an original artwork changes significantly over time. The choice faced by the restoration team is one faced by all guardians of buildings and works of art: whether to leave external sculptures in their original location to slowly deteriorate, treating them as objects with a quantifiable life-span, or whether to preserve the originals and to replace them with replicas (to borrow the opposition presented by Jean Clair in L’hiver de la culture, Paris: Flammarion, 2011). While there is no one-size-fits-all answer, the fact that objectively accurate facsimiles are now a possibility makes this choice a more real and immediate one than ever before. In 2020, for the exhibition The Materiality of the Aura: New Technologies for Preservation, the central group of Christ and Nicodemus/Joseph was 3D printed at full size.