THE MATERIALITY OF THE AURA. NEW TECHNOLOGIES FOR PRESERVATION

This exhibition is an extraordinary event from an historical, artistic and cultural point of view; a unique offering to Bologna and its citizens, who will be able to welcome back ‘home’ a work of art created for the Church of San Petronio more than 500 years ago. It is a great chance for everyone to rediscover one of the most important masterpieces of the Bolognese Renaissance. The efforts of over five years has been repaid with the joy of seeing this work recomposed.
A gamble won, with pride, together with the curators. 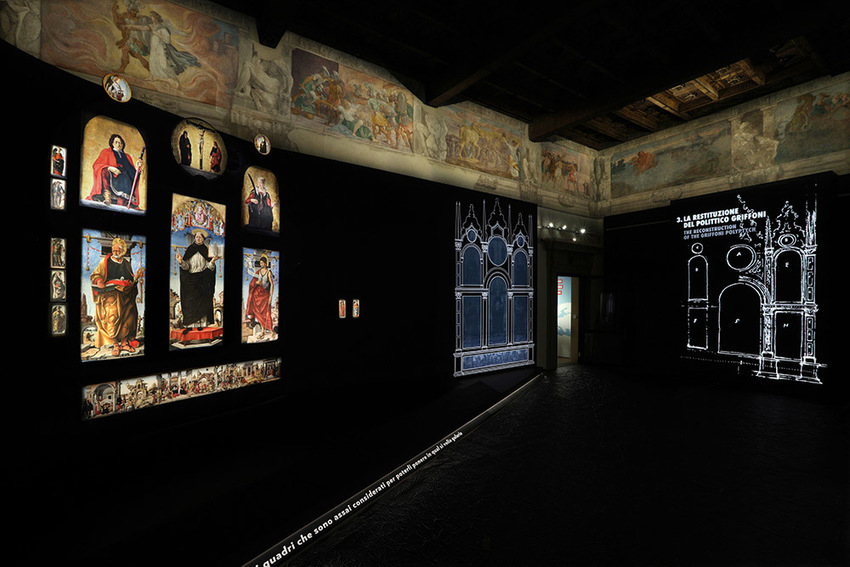 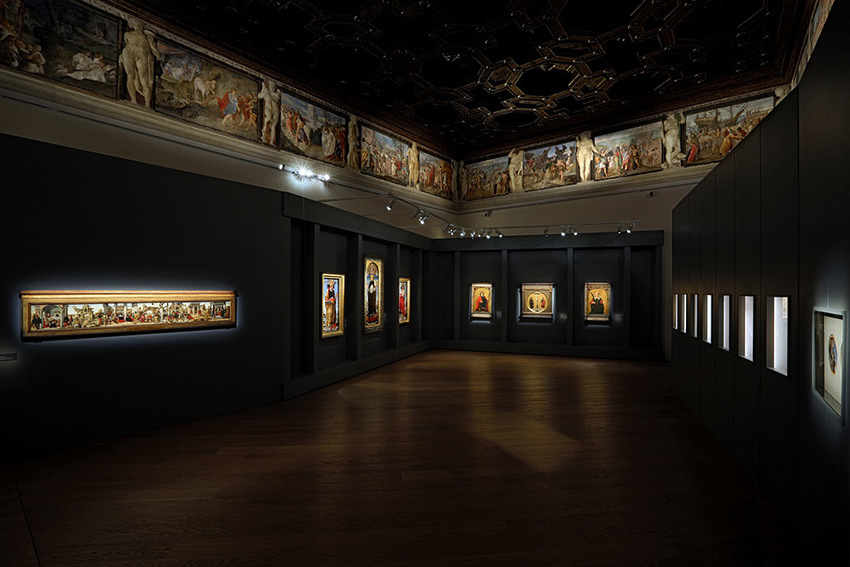 The city of Bologna celebrated the return of the Polittico Griffoni, one of the greatest altarpiece of the Bolognese renaissance, in two exhibitions at Palazzo Fava commissioned by Genus Bononiae. Musei nella città, its president, Fabio Roversi-Monaco and supported by Fondazione Cassa di Risparmio in Bologna. Originally intended to open from March 12th to June 18th 2020, the exhibition was postponed to May 18th due to the COVID-19 emergency and closed on February 15th 2020.

Il Polittico Griffoni rinasce a Bologna, curated by Mauro Natale in collaboration with Cecilia Cavalca, focused on the importance and meaning of the altarpiece by displaying, together with the individual panels coming from nine museums and collections across Europe and North America, a facsimile reuniting the Polittico. Painted between 1471 and 1472 by Francesco del Cossa and Ercole de’ Roberti, the work was commissioned by the original patrons of the Griffoni chapel, but was removed from the Basilica of Saint Petronio in Bologna, dismembered and sold when the chapel came to the Aldrovandi family in 1725. On the second floor of Palazzo Fava, the exhibition The Materiality of Aura: New Technologies for Preservation, curated by Adam Lowe with Guendalina Damone and designed by Carlos Bayod Lucini, explored instead the role of digital technology as a medium between an object’s materiality and its 'aura'. Each of the six rooms allowed the visitors to engage with works of art in new ways, showcasing projects carried out by Factum Foundation since it was created in 2009 in guiding them around chosen themes. 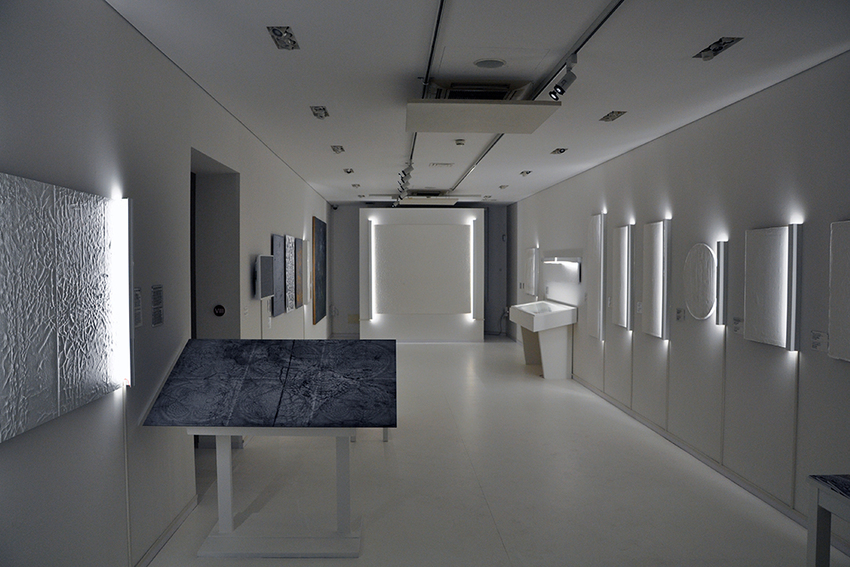 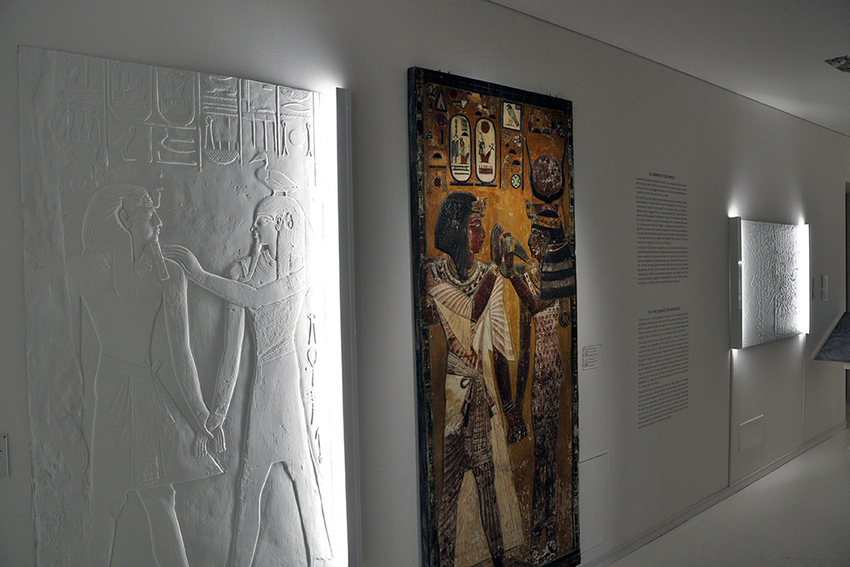 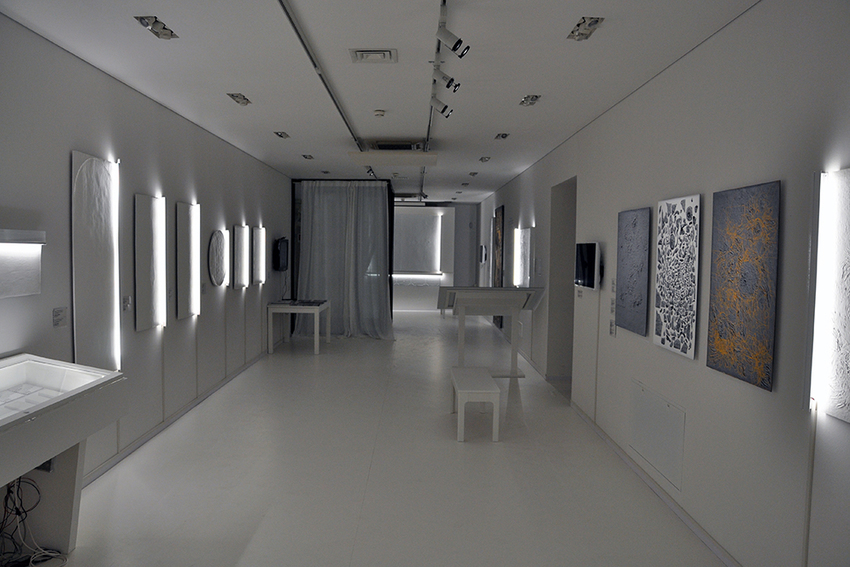 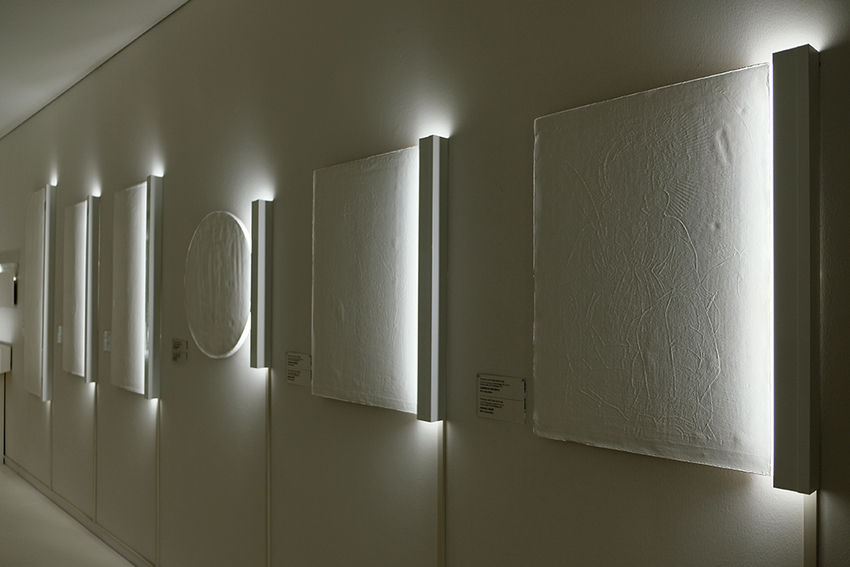 The surface of paintings and the remaking of works of art that have been destroyed were explored by exhibiting the 3D-printed surface of each of the Polittico Griffoni panels under raking light, along with two of the works recreated during The Mystery of the Lost Paintings (Five Sunflowers in a vase by Van Gogh and Water lilies by Monet). Historical technologies such as cartography and geometry were celebrated through the re-creation of al-Idrisi’s world map and a focus on Wenzel Jamnitzer, who established the principles of 3D modelling in 1569. 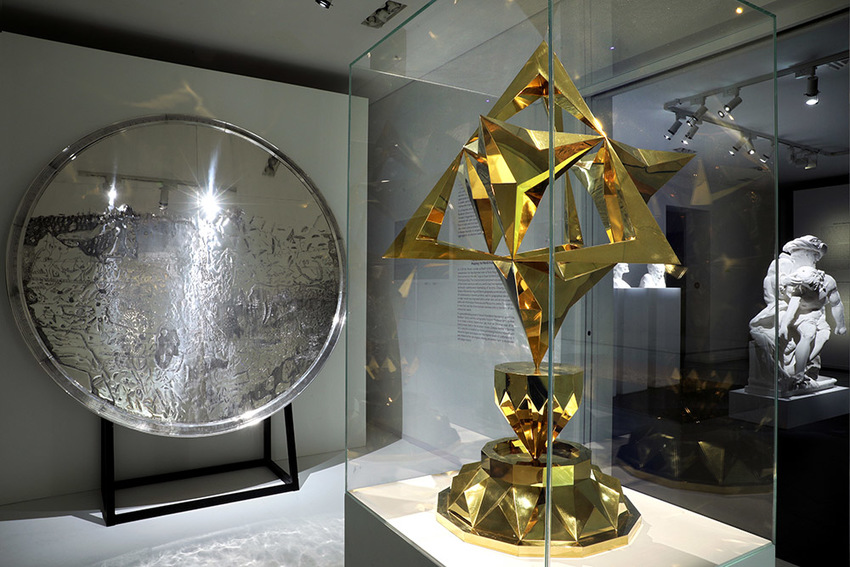 Cases such as Amico Aspertini's Deposition showcased how new technologies can be of immense help for the conservation of sculpture, while also showing new possibilities with the 'character heads' made using the Veronica Scanner - playing with Franz Xaver Messerschmidt's own bizarre works. 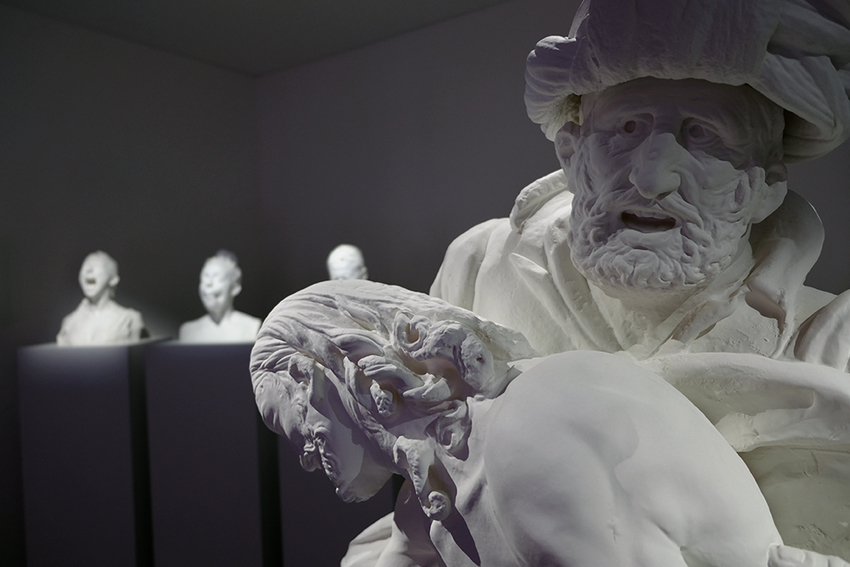 Stereolithographic print of Amico Aspertini's Deposition. In the background, the 3D-printed busts created from the data obtained with Veronica 3D Scanner © Factum Foundation 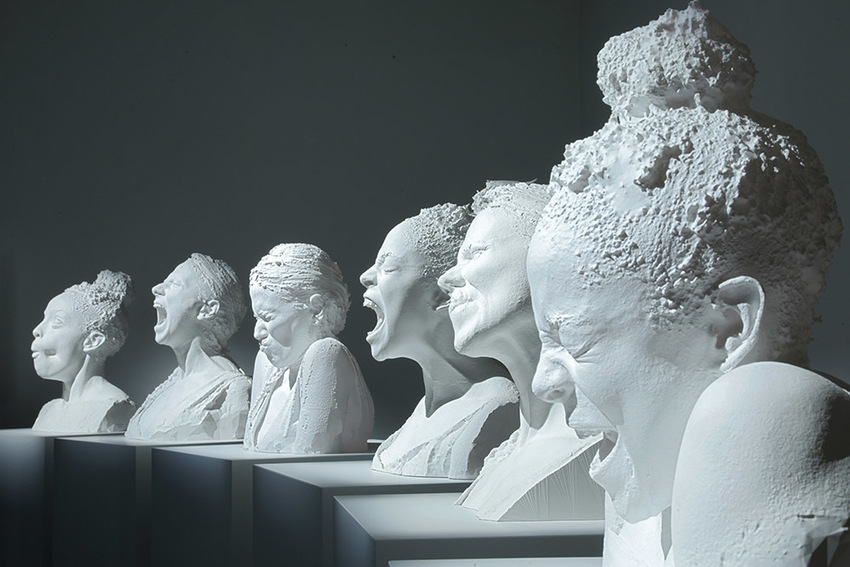 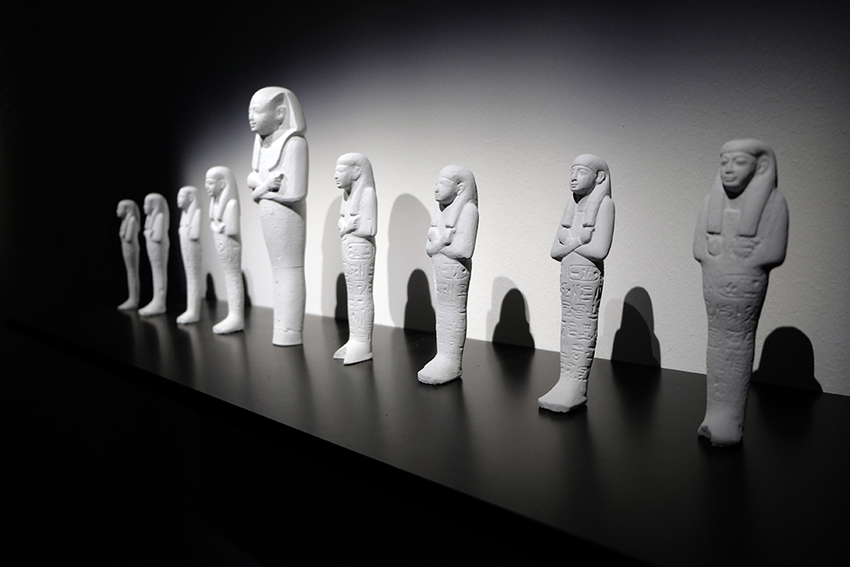 The works on TNPI and the Tomb of Seti I, one of Factum's first projects, showed how fragile our cultural heritage can be under the threat of time and mass tourism. Craftmanships such as manuscript production were also explored with a video (part of the exhibition Mindful Hands at Fondazione Giorgio Cini) and magnified images of manuscript pages on vellum, together with several facsimiles such as the Canova Sketchbooks realised in partnership with the Musei Civici of Bassano del Grappa and the Offiziolo on loan from the Fondazione Giorgio Cini. 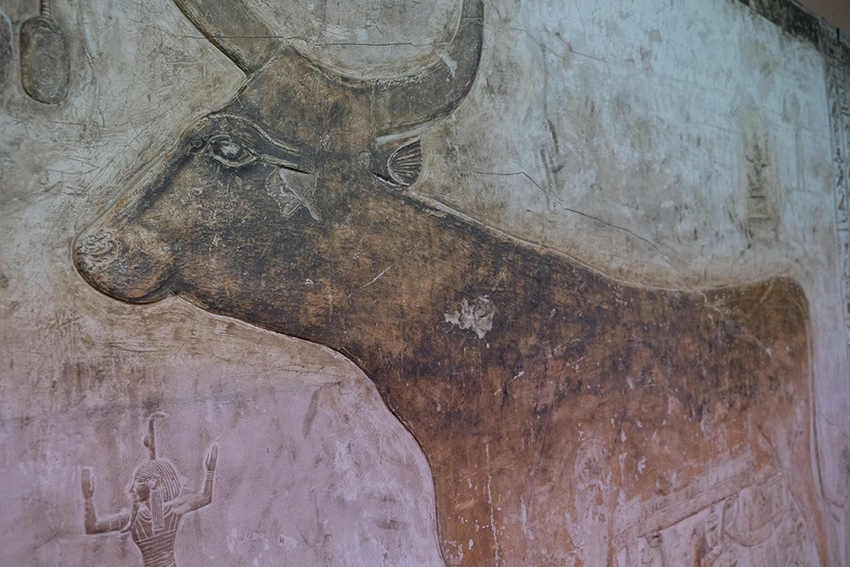 The Heavenly Cow from the tomb of Seti I, projected over a 3D-printed surface panel © Factum Foundation 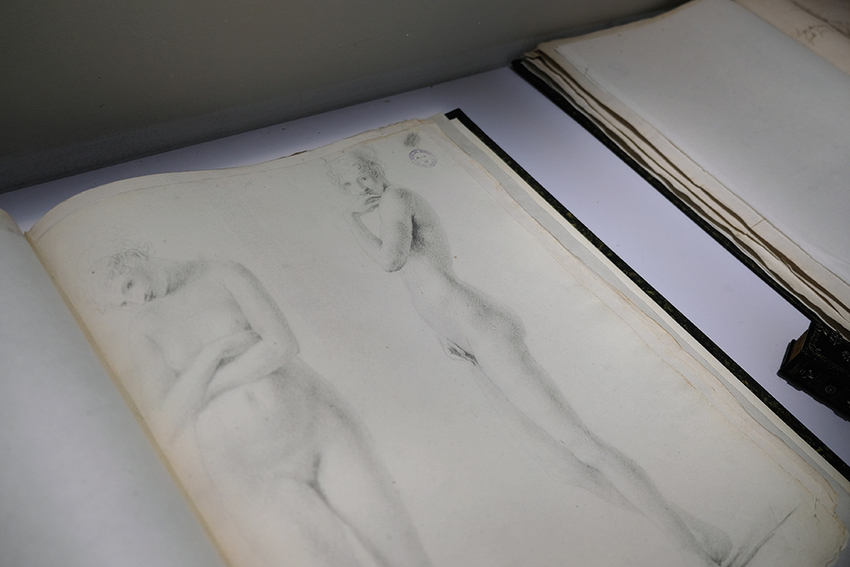 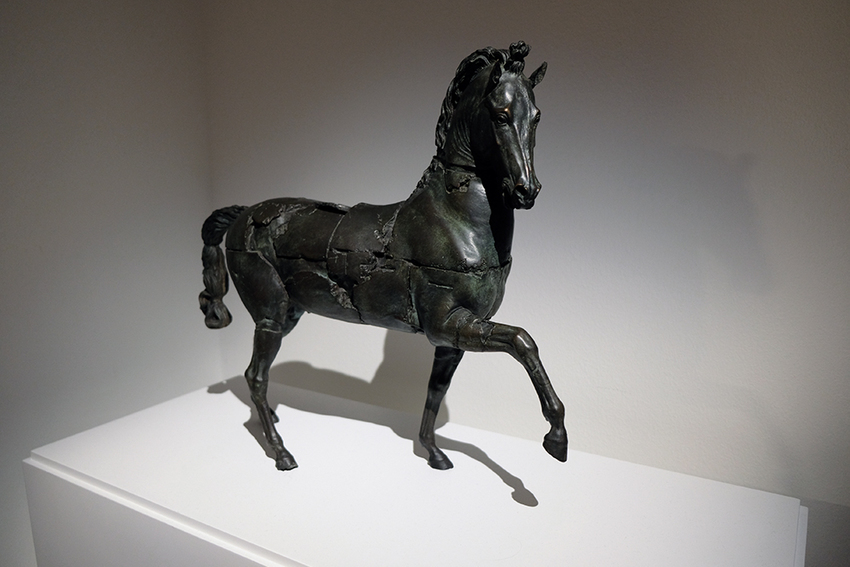 But it was the city of Bologna, where Factum Foundation has been involved in projects since 2010, the unifying factor ultimately tying together many of the rooms. Works relating to the Polittico Griffoni, the façade of San Petronio, the landscape map of the Bolognese province from the Sala Bologna in the Vatican Museums, showed how Bologna can be an exemplary case of how new technologies can help celebrating the long and rich history of cities and help preserve their cultural heritage. 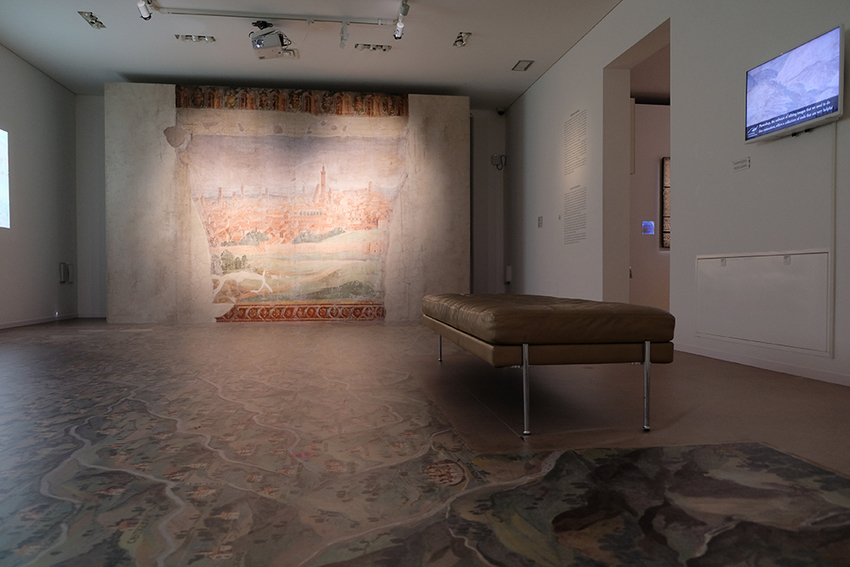 The show aimed to demonstrate how technologies such as high-resolution 3D scanning and printing, projection mapping, digital restoration and re-creation, display systems and exquisite facsimiles raise questions about originality and authenticity and reveal current developments in curation and exhibition design.

The digital data obtained from the recording of the Lamentation over the Dead Christ by Niccolò dell'Arca, located in the Church of Santa Maria della Vita, was (and still is) the perfect example of what digital technology can do to enhance the preservation of cultural heritage. The work was recorded in high resolution especially for the exhibition. 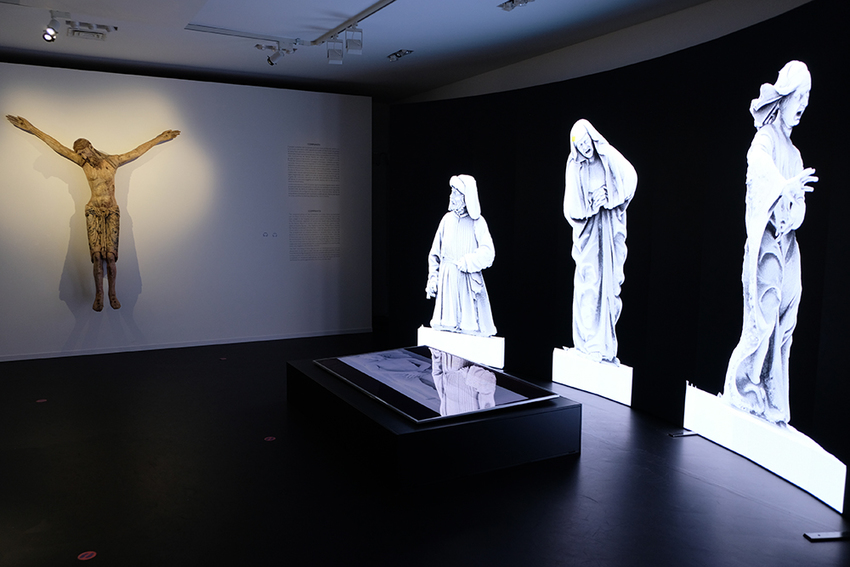 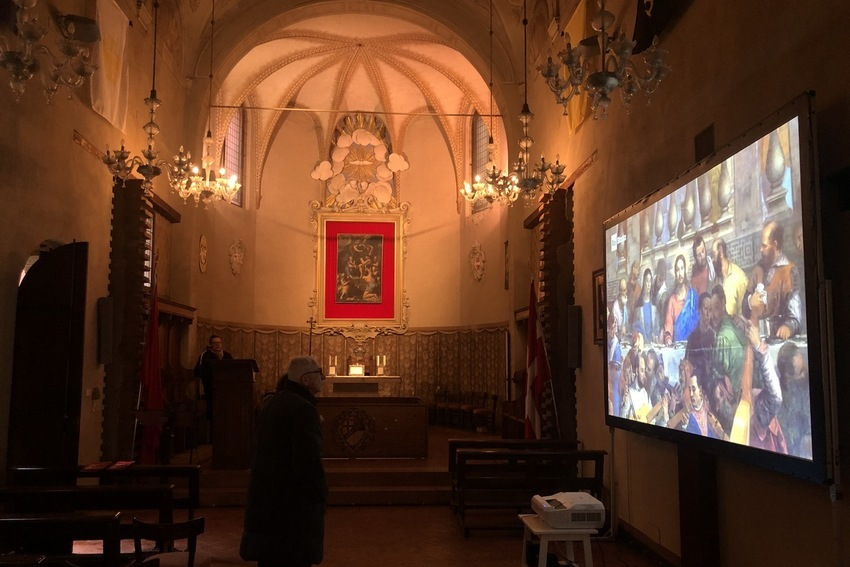 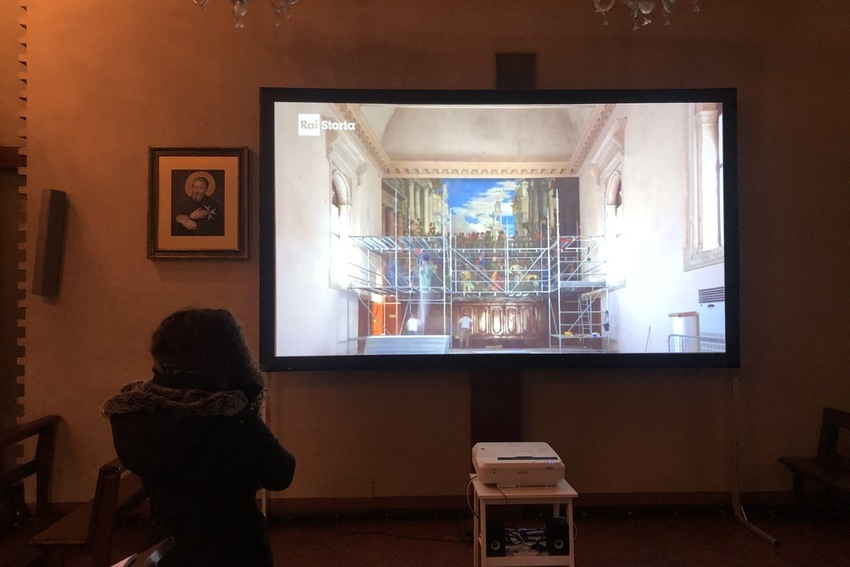 As part of the Bologna ART CITY on January 25th 2020, Factum Foundation held a live recording of the façade of the Oratorio dello Spirito Santo for the Knights of Malta, where Guendalina Damone presented the Foundation’s works and achievements in employing new technologies to record and archive cultural heritage, processes and restorations. Live recording of the façade of the Oratorio, using LiDAR scanner © Factum Foundation 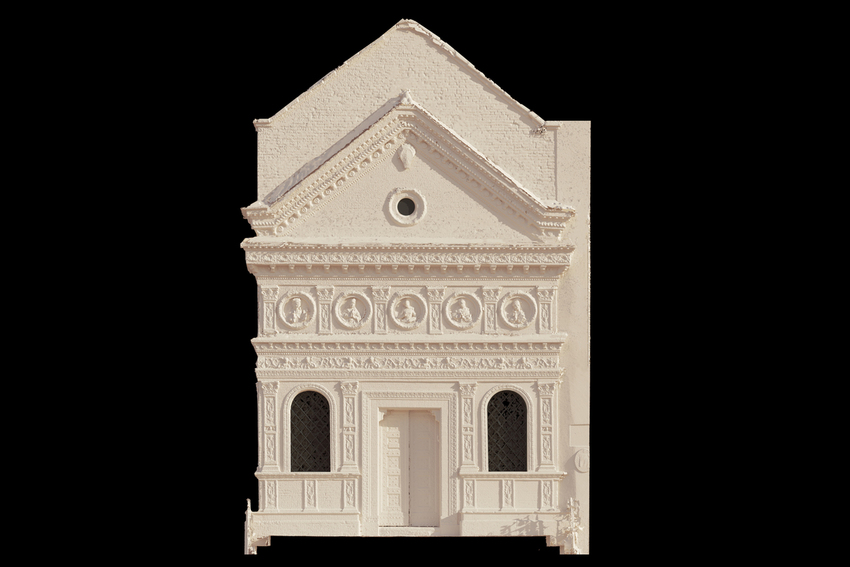 The Aura in the Age of Digital Materiality. Rethinking preservation in the shadow of an uncertain future
Milano, SilvanaEditoriale and Factum Foundation, 2020 Digital technologies are profoundly changing how we relate to art, from the ways in which we access and display objects to how we safeguard, restore, archive and even possess them. The Aura in the Age of Digital Materiality explores themes emerging from the unprecedented potential of the meeting between digital technology and cultural heritage at a time when we are being forced to fundamentally rethink what we value, how and why. It brings together recent projects by Factum and a wonderfully diverse collection of essays, many written especially for this book, by collaborators and friends.

Their widely different backgrounds and disciplines only illustrate the importance of this subject and the huge range of its relevance. Contributors include Hartwig Fischer, Director of the British Museum; Mari Lending, the author of Plaster Monuments: Architecture and the Power of Reproduction; Nadja Aksamija, Professor of Italian Renaissance and Baroque art and architecture at Wesleyan University; Egyptologist Nicholas Reeves; Pulitzer Prize-winning author Richard Powers; Shirley Djukurnã Krenak, Indigenous activist from the Upper Xingu; philosophers Bruno Latour, Brian Cantwell Smith and Alva Noë; Simon Schaffer, Professor of the History and Philosophy of Science at the University of Cambridge; architect Charlotte Skene Catling; Jerry Brotton, specialist in cartography and the Renaissance; and Chiara Casarin, Director of the Musei Civici di Bassano del Grappa.

Our world is at a crossroads. Not only are people at risk, but our cultural heritage is under threat from lack of resources, natural disasters, climate change, terrorism, mass tourism and war. There has never been a more critical time to use technology for preservation. If these high-resolution methods had been used to record Aleppo before it was fl attened, the site of Nimrud or the Bamyan Buddhas before they were blown up, or Notre Dame before it burned, these examples of human creativity would not have been so completely lost forever. When Dresden was bombed, only photographs and memories remained. In the 21st century, we have the technological means to do so much: we urgently need to act now to record and preserve our cultural heritage for future generations. This book is a thoughtful and provocative call to action.

You can purchase The Aura in the Age of Digital Materiality on Factum Foundation's bookshop or read the online version here.