The tomb of Raphael in the Pantheon

Ille hic est Raphael. Timuit quo sospite vinci rerum magna parens et moriente mori
Here lies Raphael. While he was alive, the mother of all things (Nature) feared she would be surpassed by him;
when he died, she feared that she too would die.
[Inscription over Raphael's sarcophagus]

6th March 2020 marked the 500th anniversary of Raphael's death and a number of exhibitions in this centenary year have focused on re-examining the importance of one of the most important artists of the Italian Renaissance.

Factum Arte was approached by Scuderie del Quirinale and ALES to collaborate on what might be the most complete and exhaustive overview of the painter's life and career ever exhibited: more than 200 artworks, 100 of them by Raphael's own hand, were loaned by prestigious institutions from all over Italy and the world.

This extraordinary event, curated by Marzia Faietti and Matteo Lafranconi with contributions from Vincenzo Farinella and Francesco Paolo Di Teodoro, offers the visitor an unusual starting point: a rematerialisation of the painter's tomb, which is usually visible in the Pantheon, Rome. This was an ambitious project which has involved all of Factum's departments working together on different stages of the process. 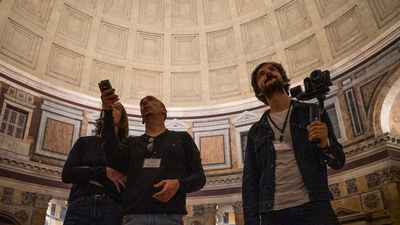 During the last days of October 2019, a team from Factum Foundation worked in the Pantheon to digitise the various elements of the tomb. The team worked at night when the space was closed to the public, conducting the recording with permission from the Italian Ministry of Cultural Heritage.

The recording phase was fundamental to acquire all the necessary high-resolution data to prepare and organise the next steps: the rematerialisation of the tomb.