When Belzoni excavated Seti's tomb in the early 19th century, he made 'squeezes' of the decoration on the tomb walls: casts of the painted plaster relief made using wax reinforced with vegetable fibres. The wax was applied in layers to the painted surface, and when it hardened it was removed and used to create plaster casts. It is a technique which was common through much of the 19th century, and later on tourists to Egypt could in fact buy kits for making their own squeezes at the entrances to major archaeological sites, sometimes consisting of a mix of plaster reinforced with paper rather than wax.

The results of plaster casting can be astonishing: long before digital recording and rematerialisation techniques provided non-contact ways of replicating objects, plaster casts were able to replicate the precise contours of a relief surface or 3D object. The plaster cast galleries of the Victoria and Albert Museum, for example, contain records of monuments which are in some cases more complete than the originals themselves, which may have deteriorated through exposure to weather or human intervention. Sometimes, plaster casts remain for sculptures or buildings whose originals no longer exist. Factum Foundation is seeking to record not just fragments from the Tomb of Seti, but also the moulds and squeezes taken from it in the 19th century, which often provide complementary information to that offered by the original surfaces from which they are taken.

But plaster casting is also an invasive technique. When a wax mould is removed from a painted surface, it often brings part of the paintwork with it, or even sections of the plaster relief. The moulds from the Museum of Fine Arts in Boston carry significant traces of the paint from the tomb walls, and areas from which squeezes have been taken often have a visibly different colour profile to neighbouring sections. Some pigments change when they come into contact with wax or other varnishes - Huntite White, for example, becomes translucent. The worst-affected areas of Seti's tomb have a polished-looking, stained surface, with only vestigial traces of paint. The creation of near-perfect replicas, then, came at the cost of the integrity of the original object, which lost a part of its distinctive materiality every time an archaeologist or tourist sought to record it for posterity.

In this video Juan Carlos Andres demonstrates the processes involved in creating plaster and wax moulds of the tomb of Seti. 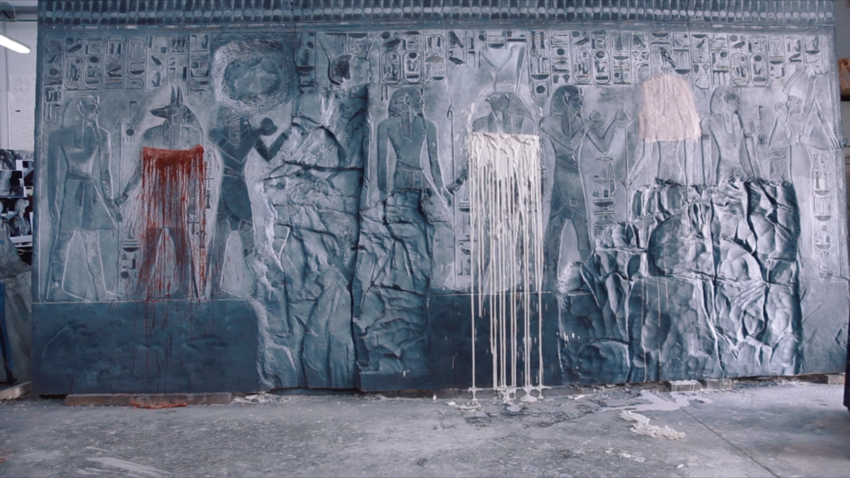