LiDAR scanning was used to create an initial 3D model of the entire Tomb of Seti. This model, created using a FARO Focus 3D x 130 Scanner, provides accurate measurements for the tomb’s overall architectural structure and the relations of one section of the tomb to the next. The tomb was scanned from 70 different scan positions, with an average distance between measured points of 1.5 to 3mm, and an integrated colour camera recorded an HDR photo overlay of up to 165 megapixel colour.

For the exhibition Scanning Seti, the LiDAR scan was used to create a scaled physical model of the entire tomb. 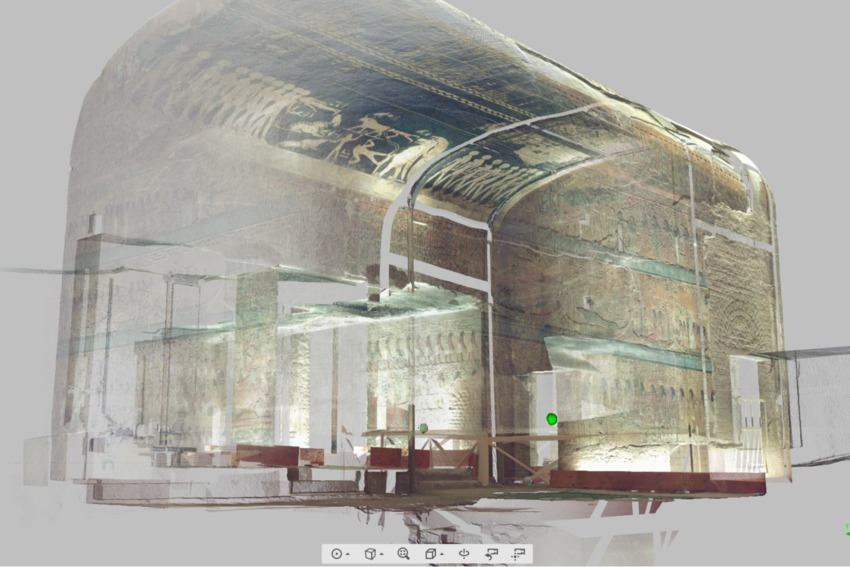 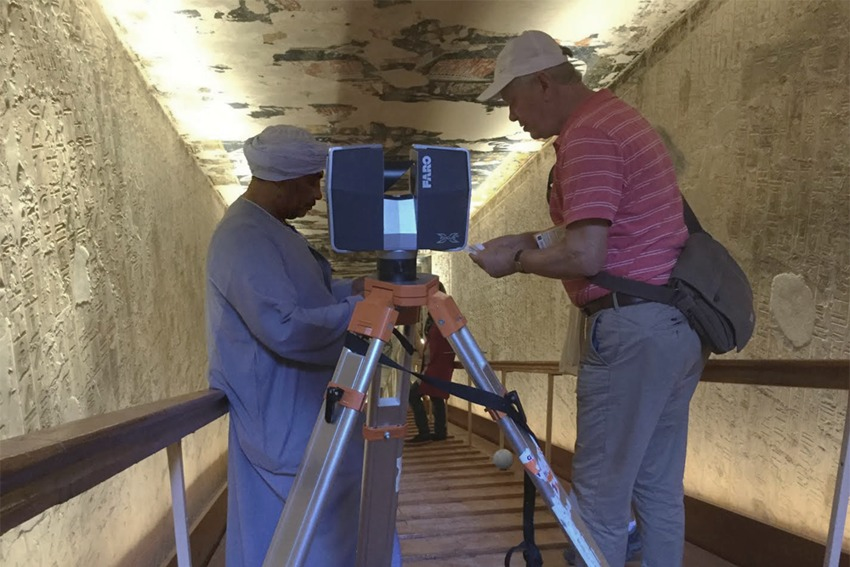 LiDAR scanning in the tomb of Seti © Factum Foundation 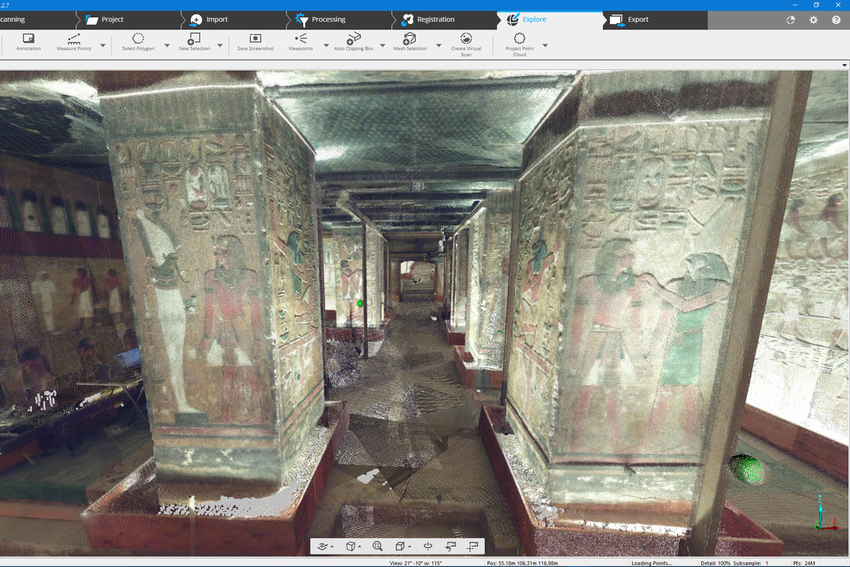 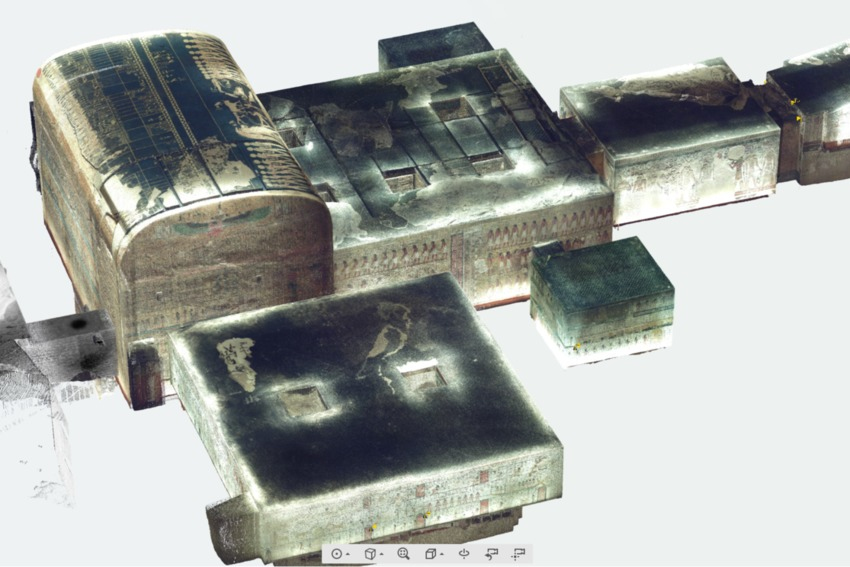 The Lucida 3D Scanner is used to record the relief – but not colour – of the internal walls of the tomb. Designed and developed by Manuel Franquelo and the team at Factum Foundation, this close-range laser scanner captures high-resolution recordings of low-relief surfaces, recording 100 million points per square meter.

The live video produced by the scanner creates a 3D point cloud which can be seen as a grey-scale render on a screen. The data is then merged with the colour data from panoramic photography to create 3D renders in full colour.

The Lucida’s resolution is high enough that every crack and brush stroke are recorded – allowing the close analysis of surfaces in the tomb which can be difficult to access even for experts. 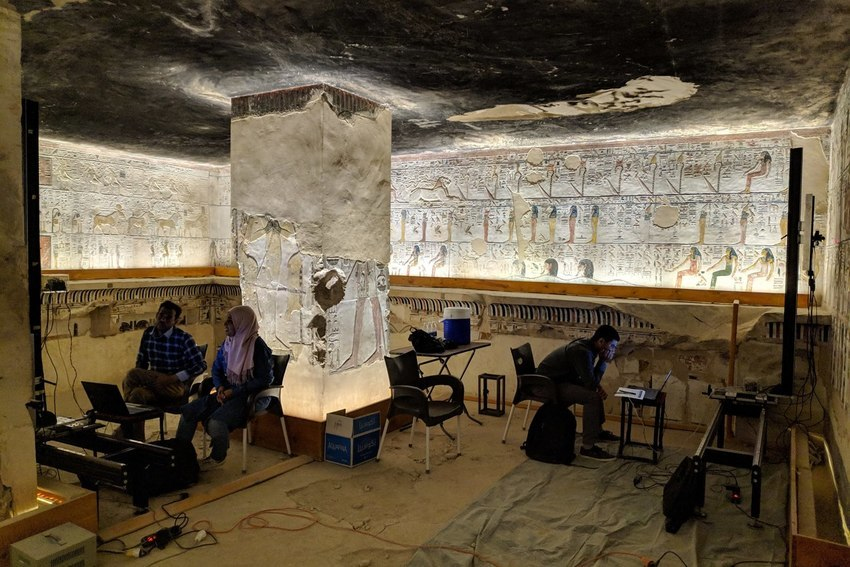 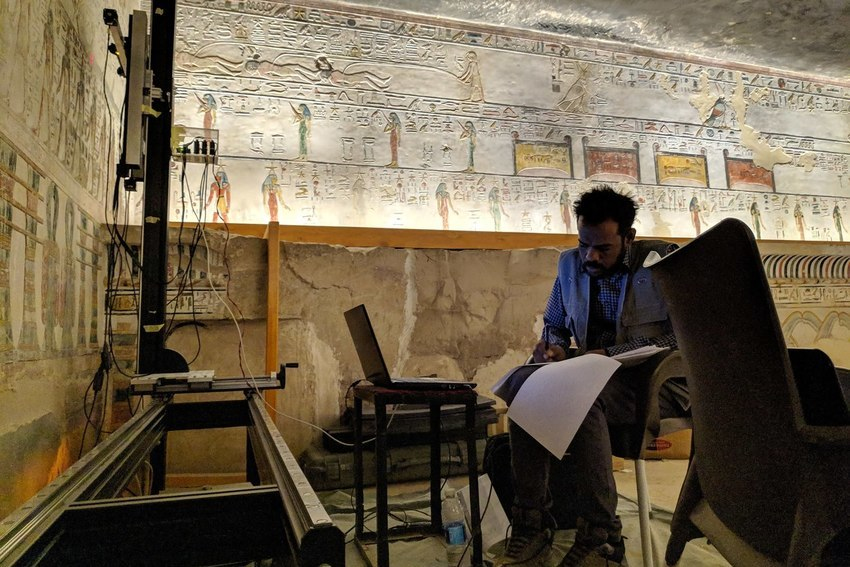 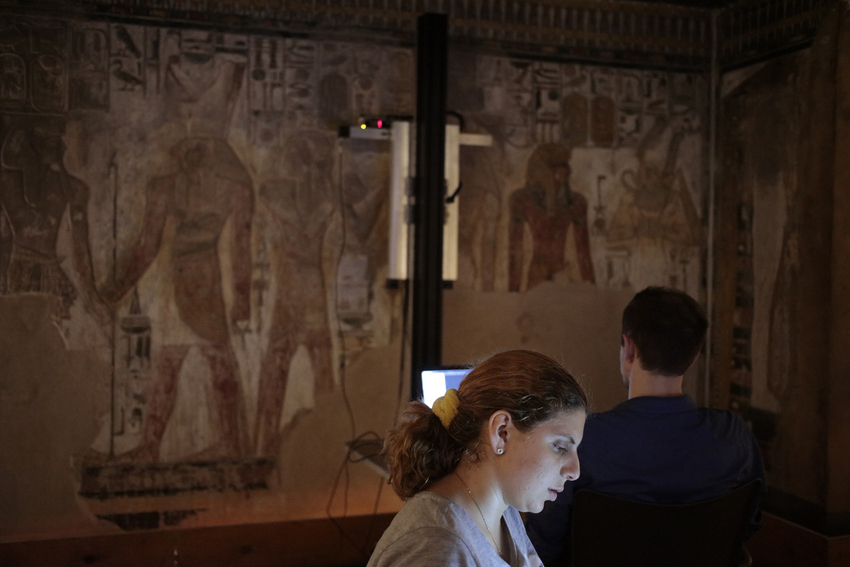 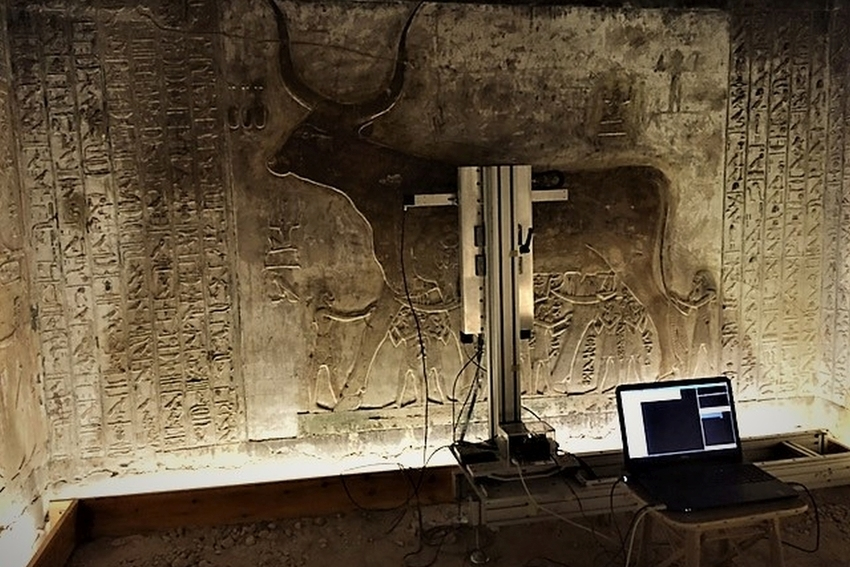 Photogrammetry is used to produce high-resolution recordings of the more complicated profiles within the tomb: columns, high relief surfaces, sections of the walls which are over 3m from the ground. This technique involves taking hundreds of overlapping photographs of an object from many different angles, and then using software (Factum Foundation uses RealityCapture) to convert these 2D images into a 3D model. 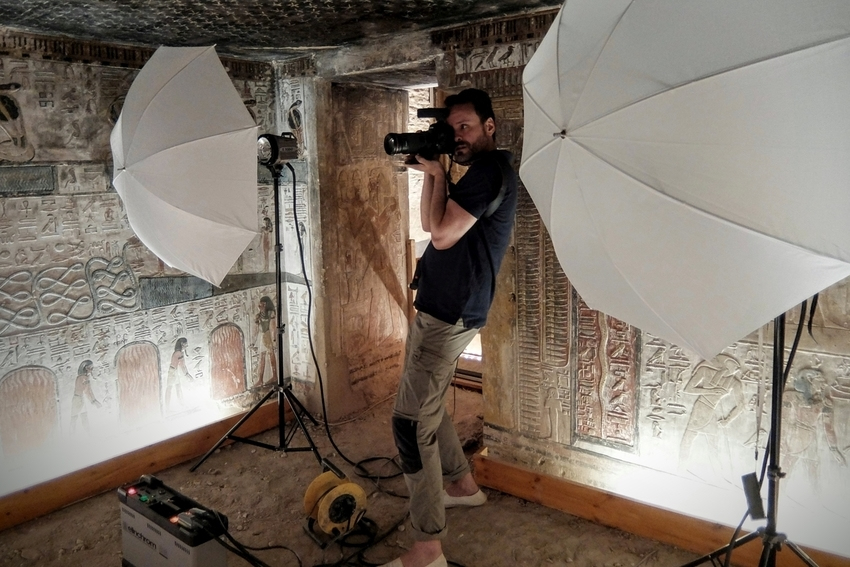 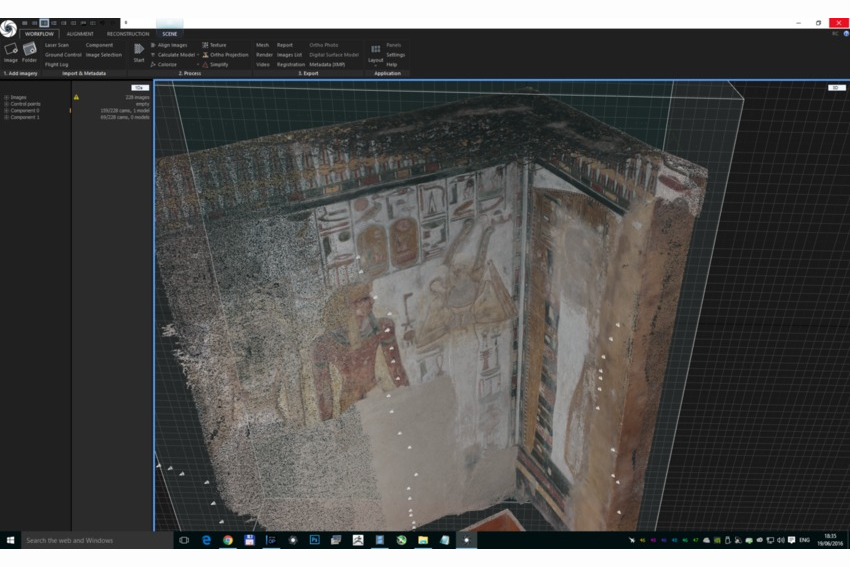 Panoramic photography is used to create an accurate record of the colours within the tomb. Sometimes referred to as Gigapixel photography due to the vast amount of data recorded, like photogrammetry it is a form of composite photography, involving hundreds of overlapping photos. When the resulting images are blown up to a 1:1 scale, they have a PPI of around 500 – enough to allow a surface to be reproduced with no loss of detail.

Colour reference charts and sticks are incorporated into many of the pictures which are taken. These provide fixed reference points which can be used during the post-processing of the photos, when digital artesans in Madrid work to ensure that colour is correct and coherent right across the vast internal surfaces of the tomb. 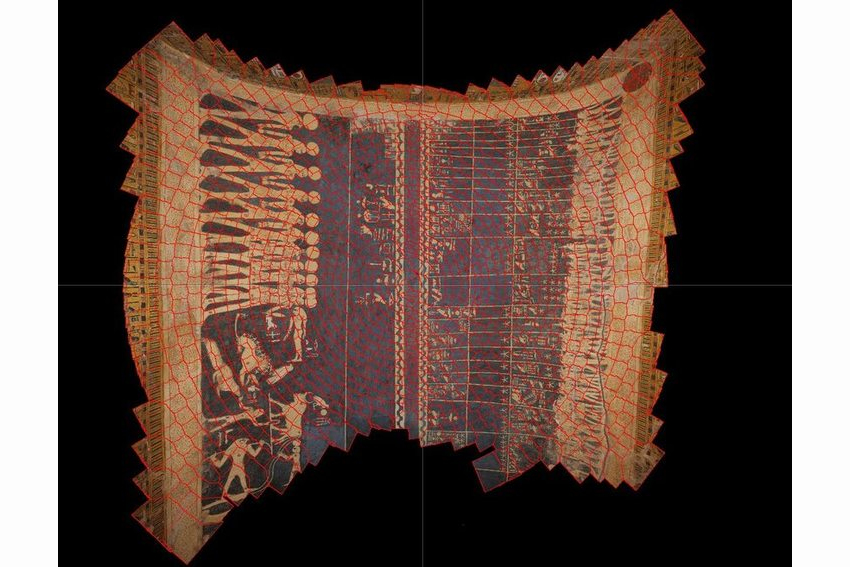 The ceiling of the sarcophagus hall © Factum Foundation 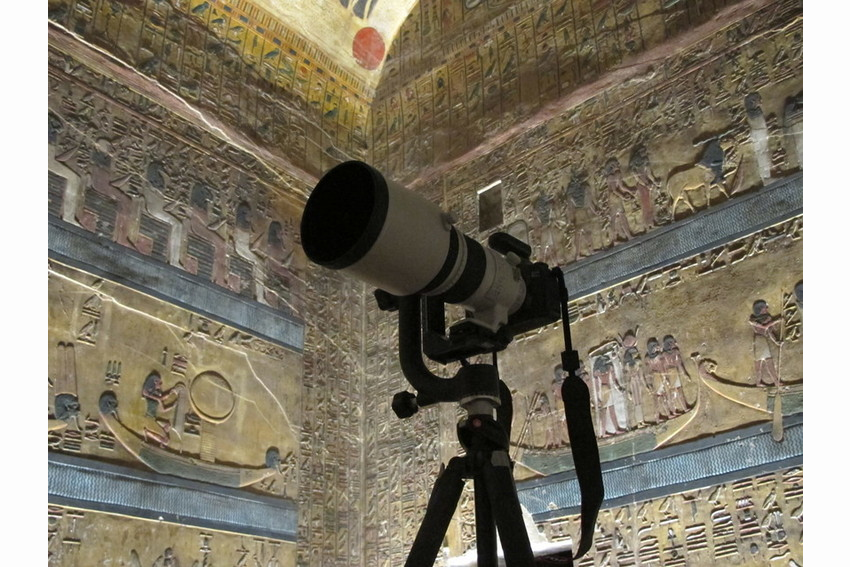 You can find out more about the recording and processing technologies used by Factum Foundation here.

In addition to the high-resolution composite photographs an archive of reference images is also being made. These record the condition of the tomb before and after scanning, the work that is taking place, the individuals involved and any detail that is relevant for research or for facsimile production.

All recording methods used by Factum Foundation are entirely non-contact and meet the highest conservation standards: at no time during the recording is there any physical contact with the wall, and no markers or colour charts are attached to any part of the wall at any time.

The data recorded in the Tomb of Seti I is stored and archived in RAW format before processing for different applications such as screen viewing or the production of facsimiles. Data storage is a major issue faced by the TNPI, as by any other organisation which produces large amounts of data in need of permanent storage. Storage in different locations and formats is critical to ensure long-term survival. An archival storage system will be installed in Stoppelaëre House before the end of 2019, and data will be freely available for study and condition monitoring.

Data processing takes place at the 3D Scanning, Training, and Archiving Centre in Luxor and at Factum’s studio in Madrid. As more of the Centre’s trainees finish the training program, more processing will happen on the West Bank. It is also expected that in the future it will be possible to collaborate with the ARCHiVe initiative in Venice to use computer vision technology and AI to analyse and evaluate the recorded data.

Processing the data of the burial chamber, the sarcophagus and the fragments involves integrating the output of the various scanning and photographic systems. The data from the different systems used – Lucida, FARO scanners, and photogrammetry/panoramic photography – is not easily compatible and the protocol to merge the three data sets has been developed in Factum Arte.

Recording the Tomb of Seti also involves scanning fragments which are no longer in situ. Thousands of fragments are being recorded by the TNPI and Factum Foundation, both in Luxor and in museums and private collections across the world. You can find out more about the project to scan the fragments here.