‘[Roger of Sicily ordered that] a disk [da’ira] should be produced in pure silver of a large extent and of 400 Roman ratls in weight, each ratl of 112 dirhams and when it was ready he had engraved on it a map of the seven climates and their lands and regions, their shorelines and hinterlands, gulfs and seas, watercourses and places of rivers, their inhabited and uninhabited parts, what [distances] were between each locality there, either along frequented roads or in determined miles or authenticated measurements and known harbors according to the version appearing on the drawing board, not differing from it at all and thus following what had been decided there without any variation.’ Al-Idrisi, Opus geographicum, fasc. 1, p. 6 (note 5). 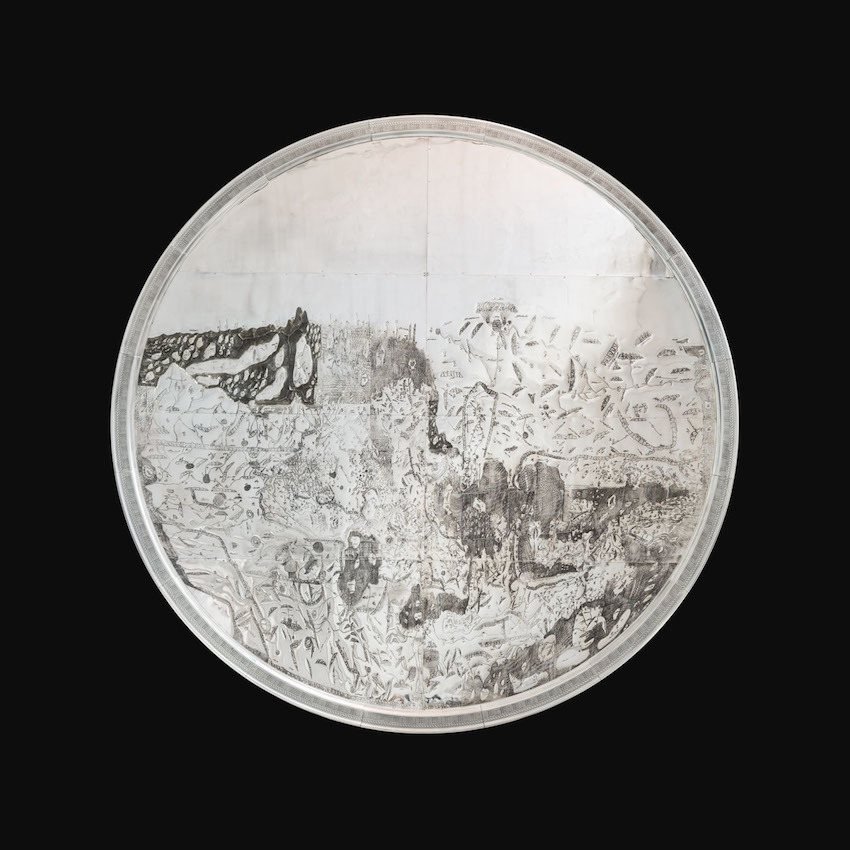 The map of the world made by the 12th-century Islamic cartographer Al-Idrisi for Roger II of Sicily was a masterpiece of mapping which remained the most technically sophisticated world-map for three centuries after its production. Drawing on several centuries of Islamic cartographic research, Al-Idrisi produced both a book of 70 maps covering the surface of the known world, and a single, round map engraved onto a silver disk and set into a wooden table, with Mecca at its centre.

The silver disk is now lost, and the Entertainment for those wanting to discover the world (Nuzhat al-mushtāq fi'khtirāq al-āfāq), survives only through later copies. But in a groundbreaking project, Factum Foundation has undertaken to re-create Al-Idrisi’s fabled map. Neither facsimile nor copy, this re-creation nonetheless combines painstaking historical research with advanced digital techniques and the highest levels of craftsmanship, paying tribute to the lost original and offering yet another layer to add to the complexity of its transmission.

Factum’s initial intention is to create two copies of the map, each one 2m in diameter and built into a wooden table: one to be given to the Bodleian and one to be given to Palermo – Roger’s capital and the map’s original home. The Bodleian’s copy will be shown at the library in an exhibition entitled ‘Talking Maps’ (5th July 2019-1st March 2020), where it will be displayed alongside both historic and fantastical maps – among them Factum Arte’s map of Tolkien’s Middle Earth.

The map has been the backdrop to Jerry Brotton's talk 'The Centre of the World: al-Idrisi's Map' on February 28th, at Hay Festival Abu Dhabi (February 25th - 28th 2020), before being part of Factum Foundation's exhibition in Palazzo Fava, Bologna, from March 12th to June 28th.

You can follow the links below to read more about the recording and making of Al-Idrisi’s world map, watch the short film below or read the book 'Re-creating the lost silver map of al-Idrisi' (2019).

Al-Idrisi and Roger II: mapping the world in the 12th century

The recording and digital reconstruction of Al-Idrisi’s world map

Engraving the Al-Idrisi map in silver