The Heart-shaped map of Hajji Ahmed The Ottoman-Venetian heart-shaped map of the world now preserved in the Biblioteca Marciana in Venice was found in 1795 in the Criminal Archive of the Council of Ten, in the Doges’ Palace in Venice. Dating to the second half of the 16th century, it has traditionally been attributed to the Tunisian Hajji Ahmed, although recent studies have suggested that it was a multi-author project conceived in Venice in 1559–69. The map carries text in Ottoman Turkish and must be understood within the context of commercial relations between the Republic of Venice and the Ottoman Empire; in that period Constantinople was making frequent cartographic requests of Venice, and this map was probably designed for the Ottoman market.

The object preserved by the Biblioteca Marciana is the map’s matrix, comprising six engraved wooden blocks measuring 106 x 110 cm and two woodblock prints made from the matrix at the end of the 18th century measuring 111 x 113.5 cm. The matrix shows a cordiform earth (a projection in the form of a heart, a configuration common at the time), with place names written in Arabic letters and a 292-line text in Ottoman Turkish to left and right. The text is divided into five sections: prologue, introduction, description of the continents, descriptions of the twelve main provinces of the world and of the seven great lords, and epilogue. In the lower part of the map are an armillary sphere and two celestial spheres – distinctively European subjects of representation, as Abbot Assemani has remarked, which are found at the same time period in the work of Albrecht Dürer among others. Map, text, and spheres are framed by a string of floral motifs, broken only at the top by the title, ‘Kemâlîyle naqš olunmıš jümle jihân nümûnesi’, which translates as ‘Perfect and complete engraving and description of the whole world’. 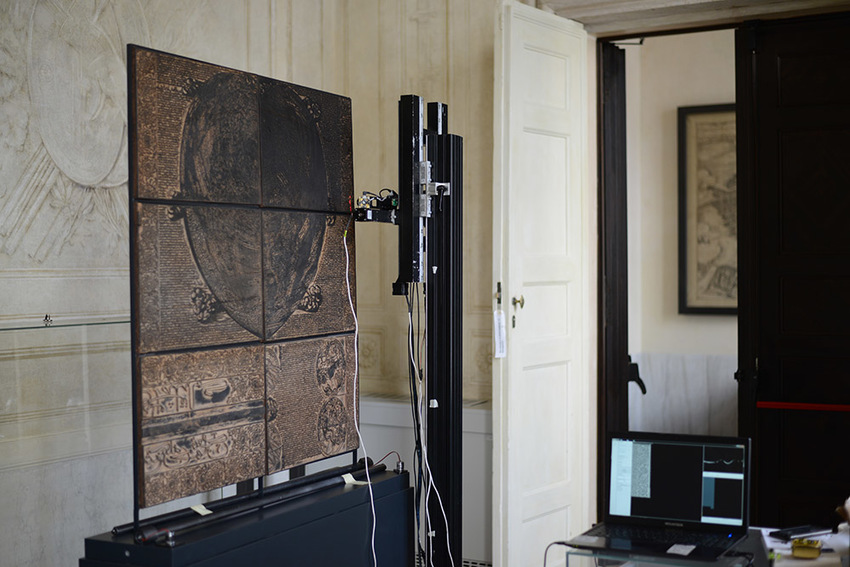 In 2019, the Biblioteca Marciana started a project concerning a new philological edition of the Heart-shaped map of Hajji Ahmed (also known as Mappa Turchesca), involving the memoranda of understanding between the Venetian institutes of IUAV University and the Academy of Fine Arts. In February 2019, Factum Foundation collaborated with the IUAV CIRCE Photogrammetry Lab to record the original cherry-wood printing blocks in high resolution. The recording was part of an initiative led by ARCHiVe (Analysis and Recording of Cultural Heritage in Venice), and was framed as a comparative study designed to assess the merits of three recording techniques: photogrammetry, laser scanning, and the Lucida 3D Scanner. 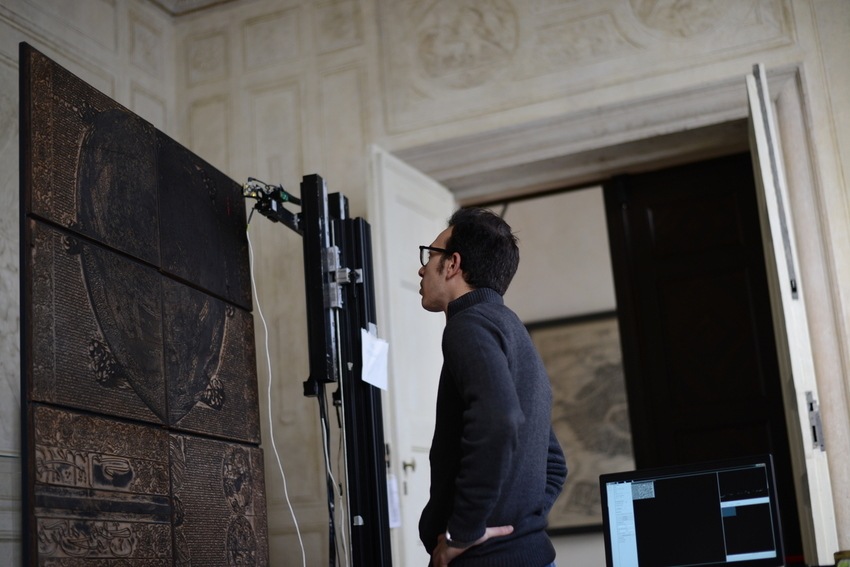 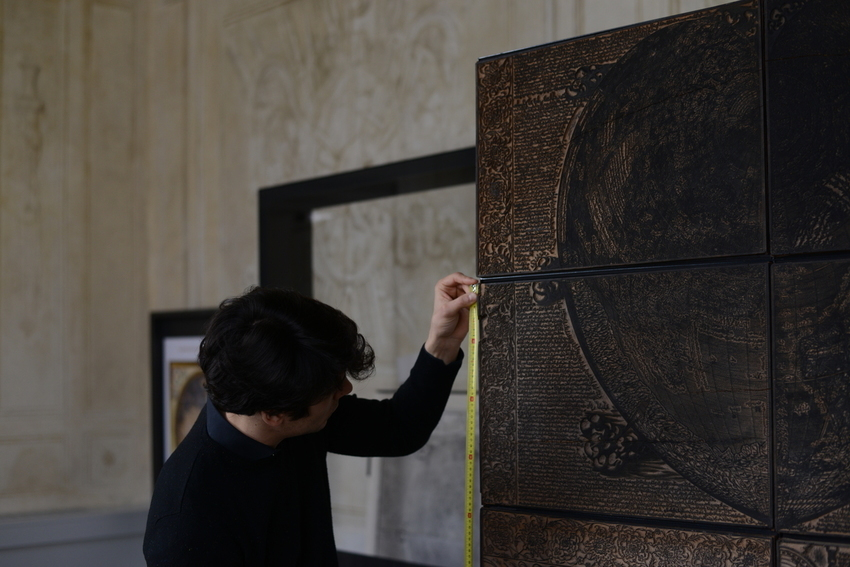 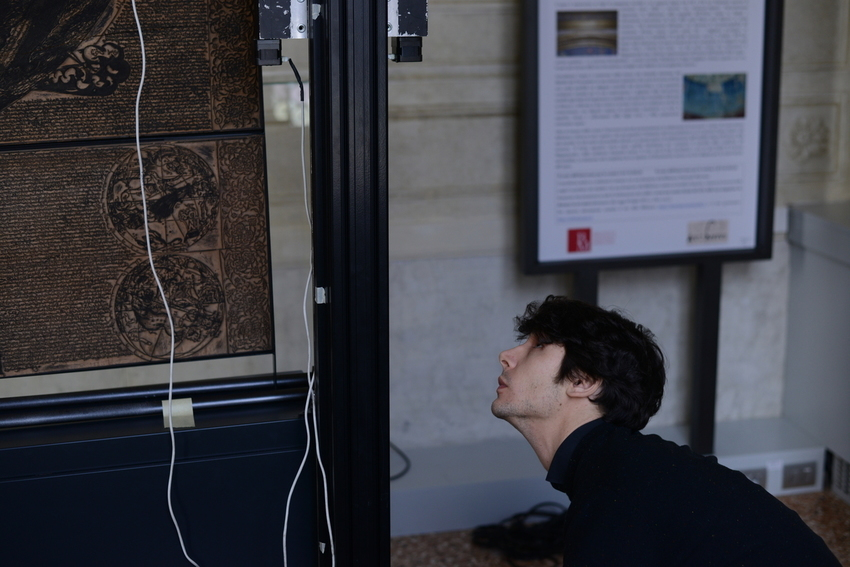 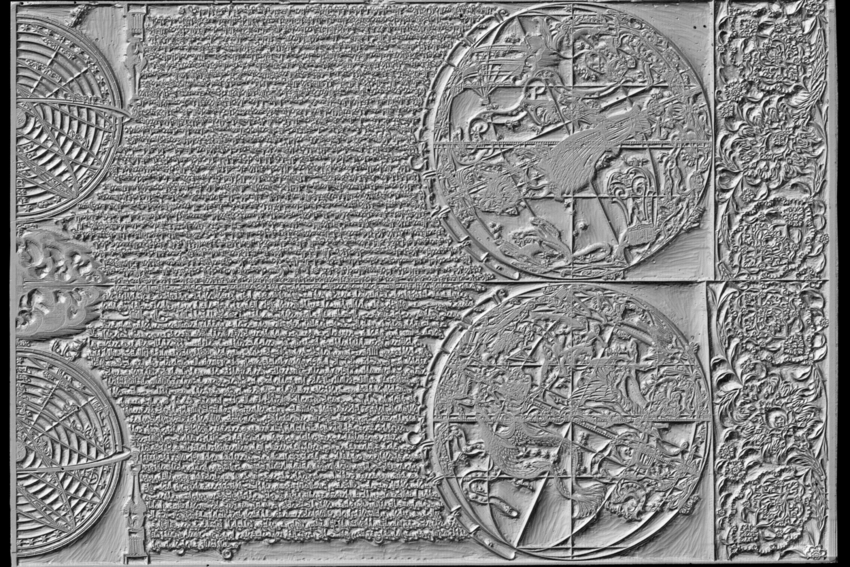 The photogrammetric survey was conducted using a Nikon D800 reflex with a 50mm lens, with the data processing employing the Agisoft Metashape Pro Software. A Range 7 triangulation laser scanner, employing both a telephoto lens and a wide-angle lens (precision ± 40 microns), was then used to re-record the map. Alignment for the laser scanner was performed using Geomagic Studio software. Finally, the map was recorded with the Lucida 3D Scanner, which is designed for the acquisition of 3D information from objects with an almost flat surface, such as paintings or bas-reliefs. At the end of the investigation, a section (10 x 10 cm) of the data collected from the different systems was printed in 3D. The information acquired through the Lucida Scanner was found to be the most suitable for the purposes of creating a faithful copy of the product.

In November 2020 a team from ARCHiVe completed the recording of the original woodblocks by 3D scanning the back of the panels with the Lucida 3D Scanner. This information will complement the data from the front, to generate a full record of the condition of the object. The next phase of the project involved the digital restoration of the surface data of woodblock, which began just after the recording in 2019. The 1795 printed copy of the map within the collection of the Marciana served as a reference to digitally repair the cracks and other missing elements of the original panels. The aim is to create a restored set of printing blocks from which a new version of the map can be printed, sponsored by the Kingdom of Saudi Arabia as part of their effort to support the Associazione Amici della Marciana in promoting the Biblioteca’s cartographic collection.

The digital restoration process is being done by Factum Foundation’s Teresa Casado working on the greyscale depth-map information from the Lucida using Photoshop. One copy of the map was made at the end of 2019 using CNC-milled printing blocks, and different tests have been carried out since to check the restored version of the surface. Canon Production Printing's elevated printing technology, which was enhanced and applied to cultural heritage projects through Factum's collaboration and is now in-house in Madrid, is currently showing the best results in terms of accuracy for prototyping a new set of panels. 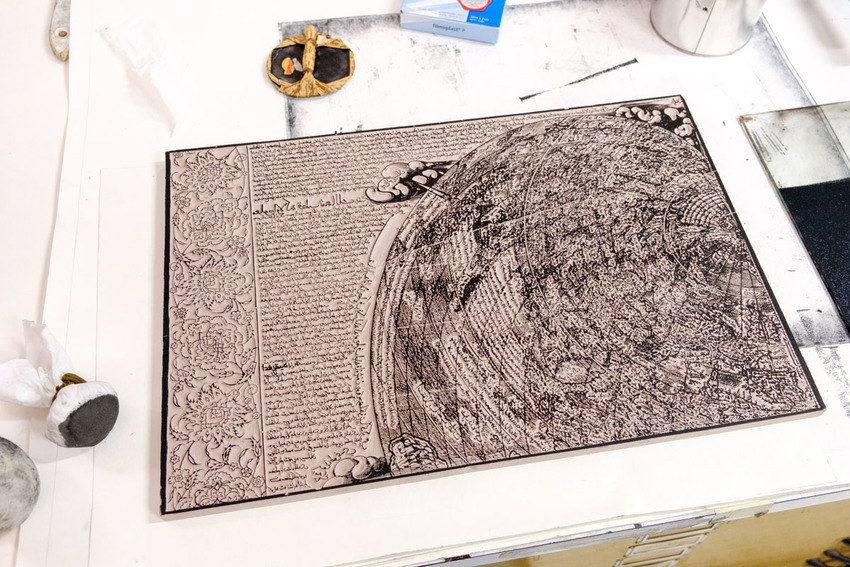 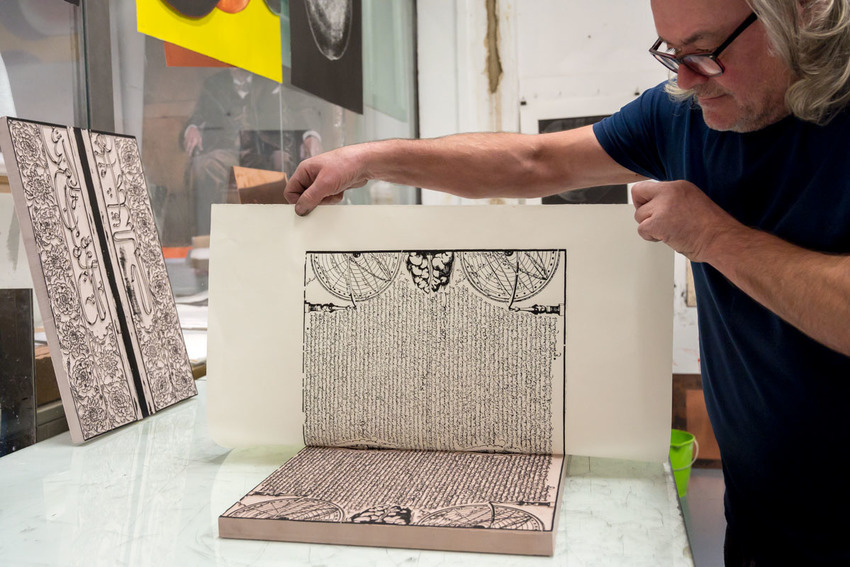 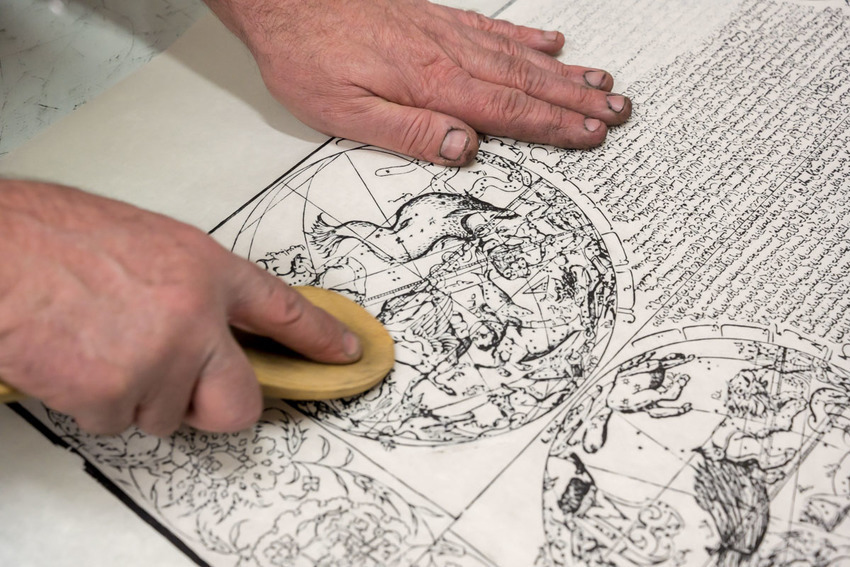 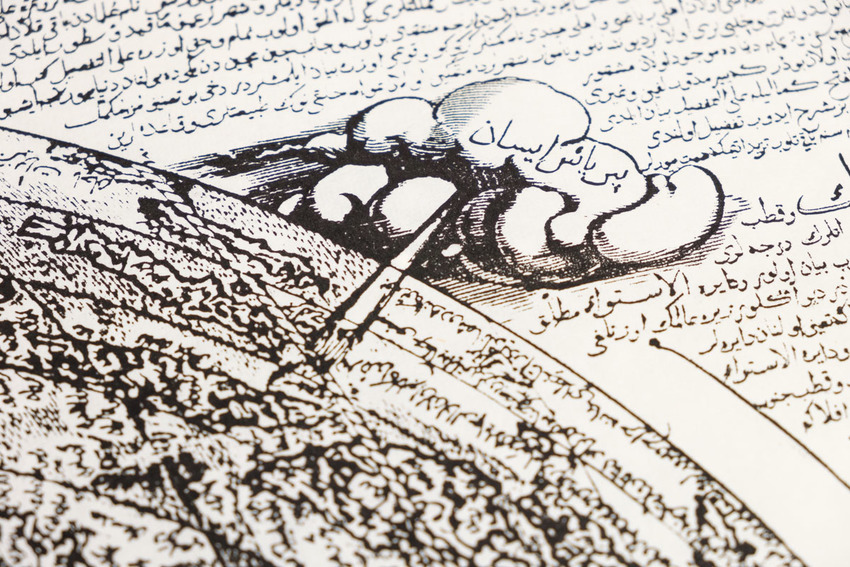 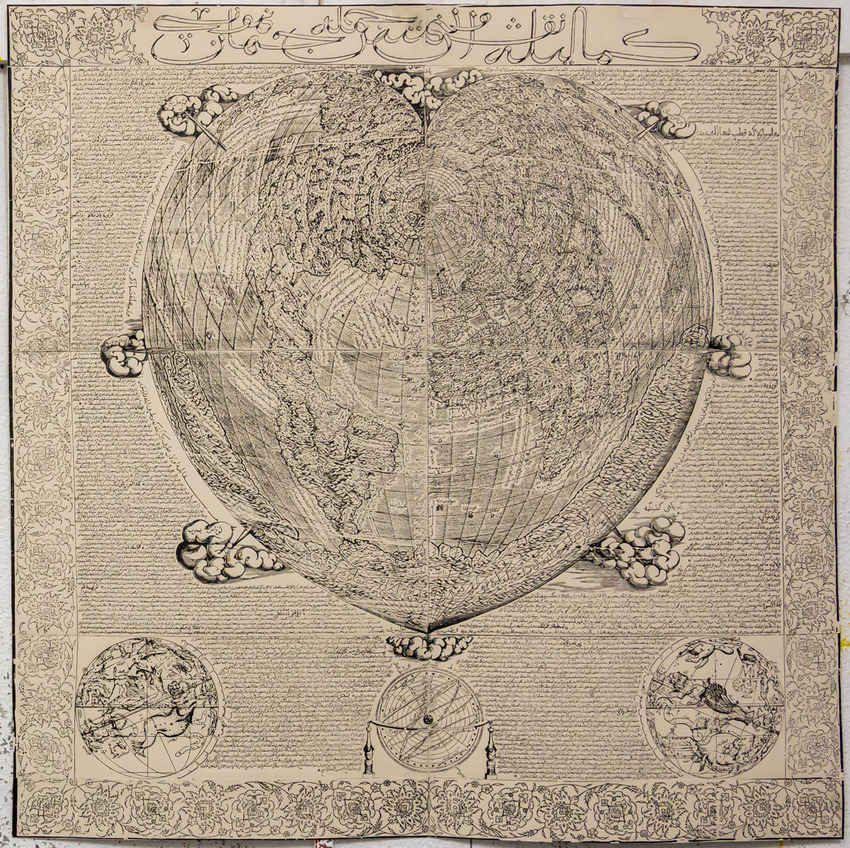 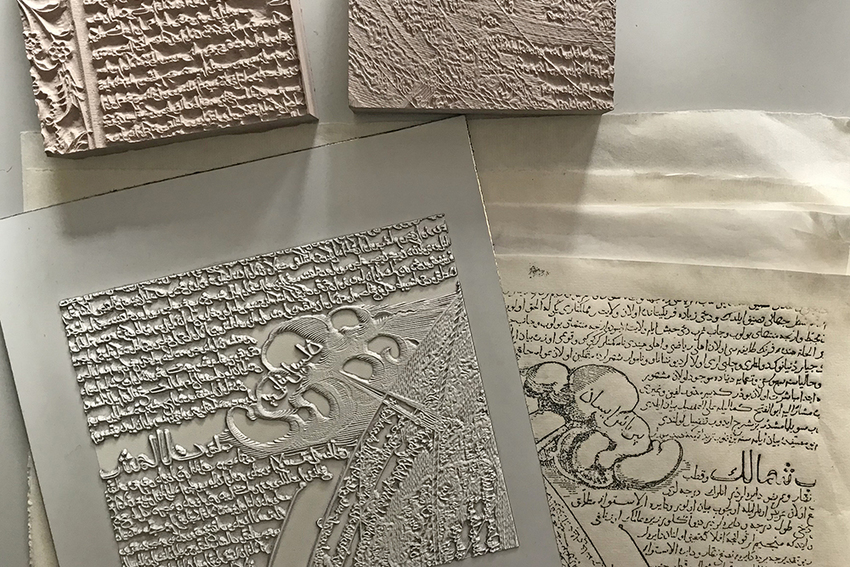 Small sections of one of the printing blocks, re-materialised with CNC-milling (top) and with CPP’s Elevated Printing (bottom left). Initial printing tests have been made out of the CPP surface (bottom right) © Factum Foundation

The recreation of the woodblocks of the Mappa Turchesca and the print made from the blocks (left) alongside two enlarged pages from the Martirologio di Ferrara (right), made for the exhibition 'Mindful Hands' at the Fondazione Giorgio Cini. In the glass case at the centre of the room there are facsimiles of two Canova sketchbooks and the miniature Offiziolo di Carlo VII © Paolo Righi for Genus Bononiae

We thank Mario Costa and Fabio Martinello, students from the Master of Digital Architecture who have interned at ARCHiVe in Venice and Factum Foundation in Madrid, for their participation in the project.