In December 2017, Factum Foundation funded and co-led a remarkable field trip in search of proof of a new type of dinosaur in one of the most inaccessible and dangerous places on earth: Pakistan’s western province of Balochistan.

Generally off limits to the outside world because of its proximity to the Afghanistan conflict, and its homegrown insurgency seeking independence from Islamabad, this oil and gas-rich region is also a largely unexplored treasure-trove of prehistoric remains.

These include the now reconstructed Baluchitherium, which at some seven metres in length and weighing 10-15 tons, is the largest land mammal ever found. In dinosaur terms, Balochistan’s breathtaking desert and mountain landscape additionally yielded hordes of bones and fragments of two-legged predators, winged pterosaurs, and the focus of our interest, titanosaurian sauropods.

These giant four-legged, long-necked planteaters could weigh tens of tons and roamed in herds across the fertile plains of what was then the Indian landmass, before it collided with the Asian landmass to create the continents that exist today. 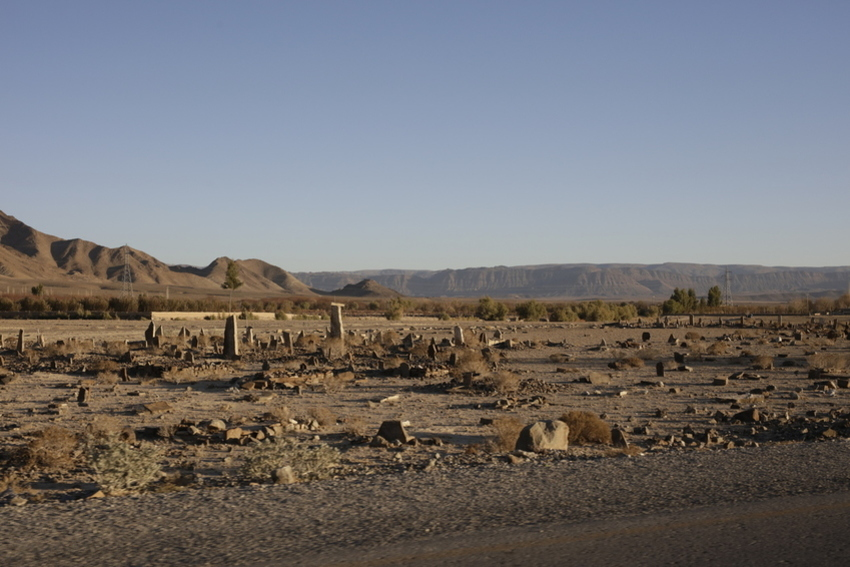 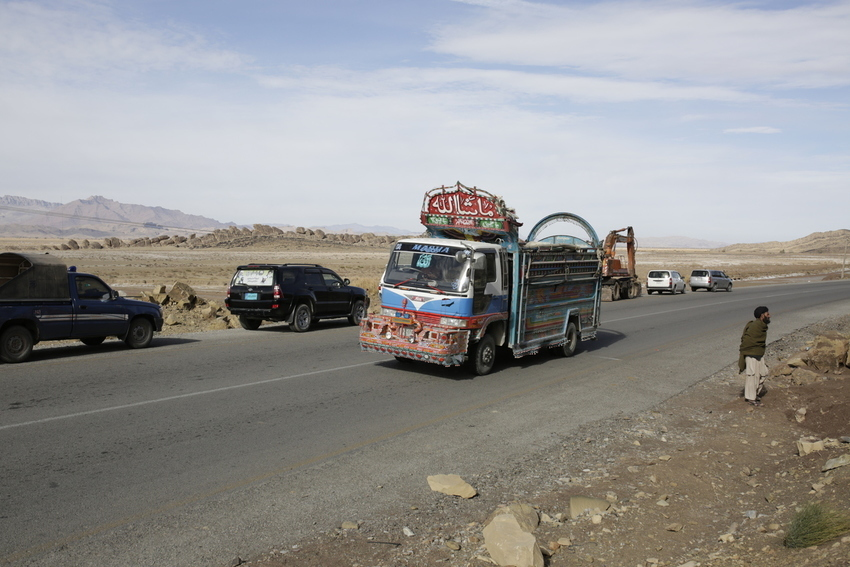 For two days in December 2017, a team from Factum Foundation, the Pakistan Museum of Natural History, Iconem (France), Palaeostreet studio (Poland) and Dust and Scratches Films (UK) recorded thousands of close-up photographs of a controversial set of markings discovered on a 70-million-year-old sandstone slab located near the town of Zhob. The site was exposed around 2012 during blasting work in the construction of the N-50 highway running from the city of Dera Ismail Khan to the Balochistanprovincial capital Quetta.

The markings first caught the attention of geologist Mr. Sadiq Malkani as he travelled through the region on official work. A former regional director of the Geological Survey Pakistan, Mr. Malkani is also a keen amateur paleontologist who is credited with unearthing Pakistan’s first verified dinosaur remains in 2000, primarily sauropod bones. He remains adamant that the Zhob rock markings are footprints of one or two titanosaurs that probably moved in a herd here 70 million years ago, leaving large fore and hind foot marks, including ‘gliding’ marks, where one creature slipped in the mud. His hypothesis is disputed but not ruled out by paleontological circles. Factum and its partners continue their work to find evidence of a sauropod trackway by Zhob. 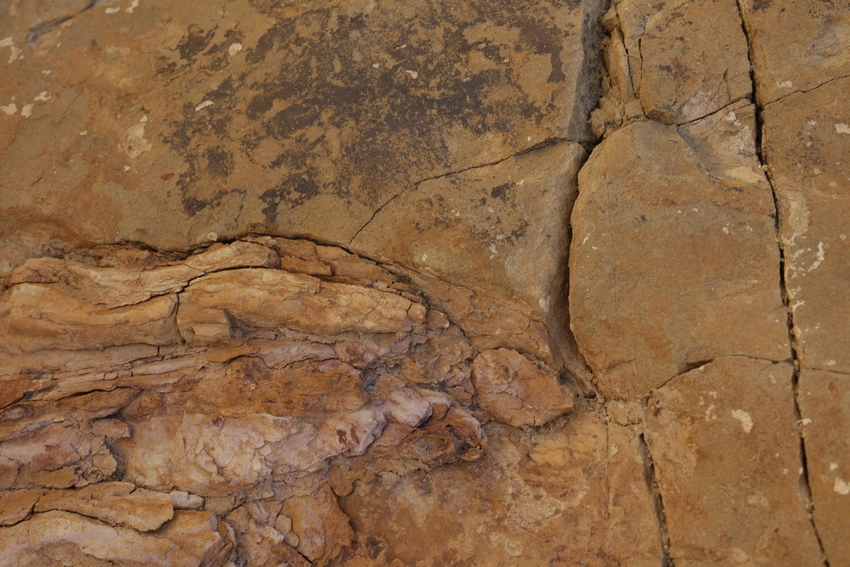 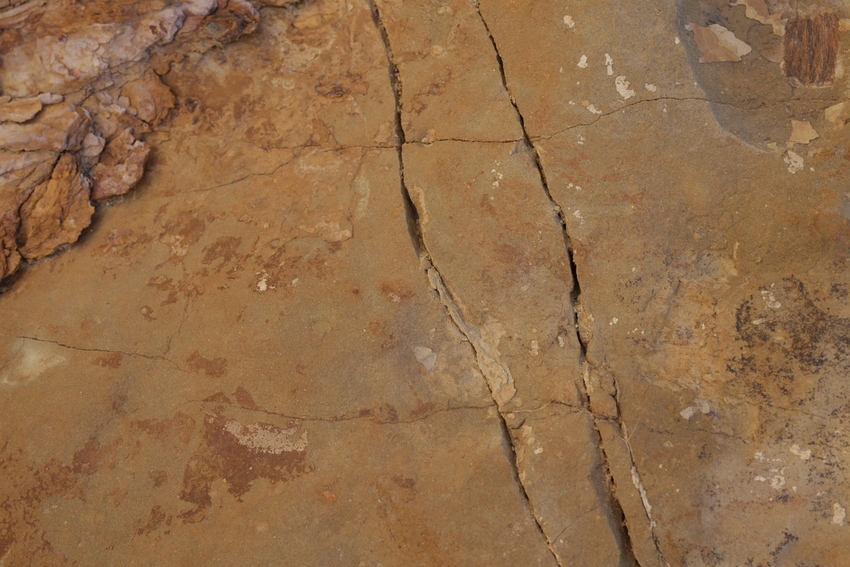 Over the course of two days in December 2017, the team took thousands of terrestrial and aerial photos of the site. Factum Foundation’s Ross Davison used a Canon 5ds to shoot over 8,000 photos from the ground, surrounding ledges, and the bucket of an excavator. To the excitement of dozens of locals who gathered nearby to watch, Iconem’s Vincent Tournadre flew a phantom 4 Pro drone and a mavic to collect more data from the top sections of the facade that Ross couldn't reach from the excavator, as well as surrounding contextual data. Together they recorded more than 11,000 images. These images were combined into a cohesive 3D model through a process called photogrammetry. 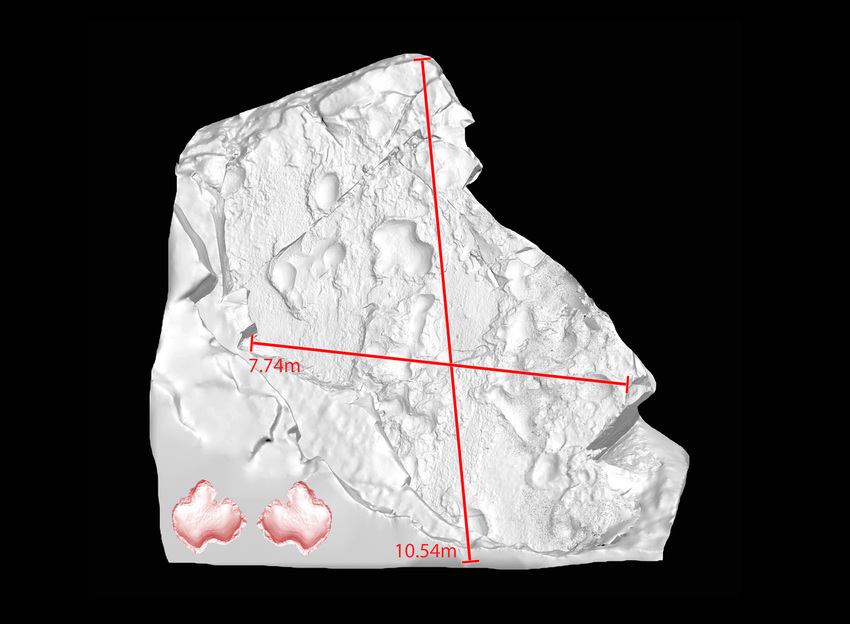 Measurements of the potential footprint based on a 3D render 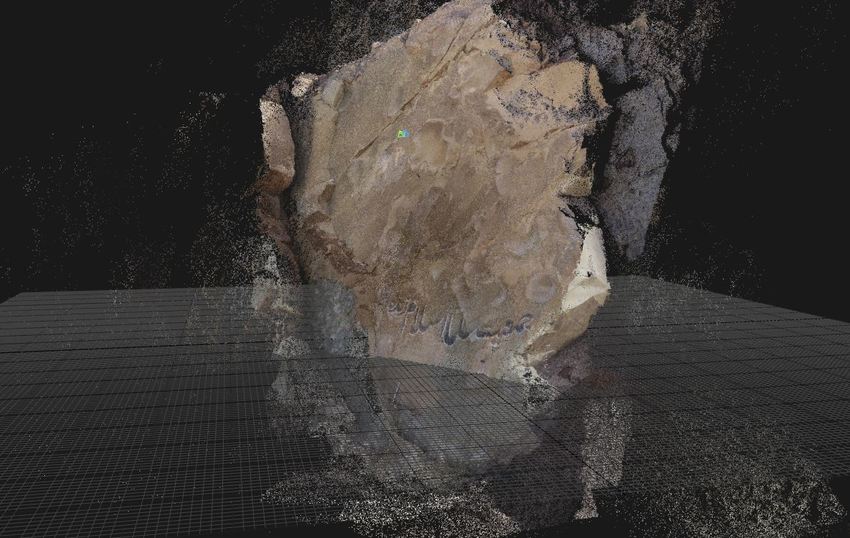 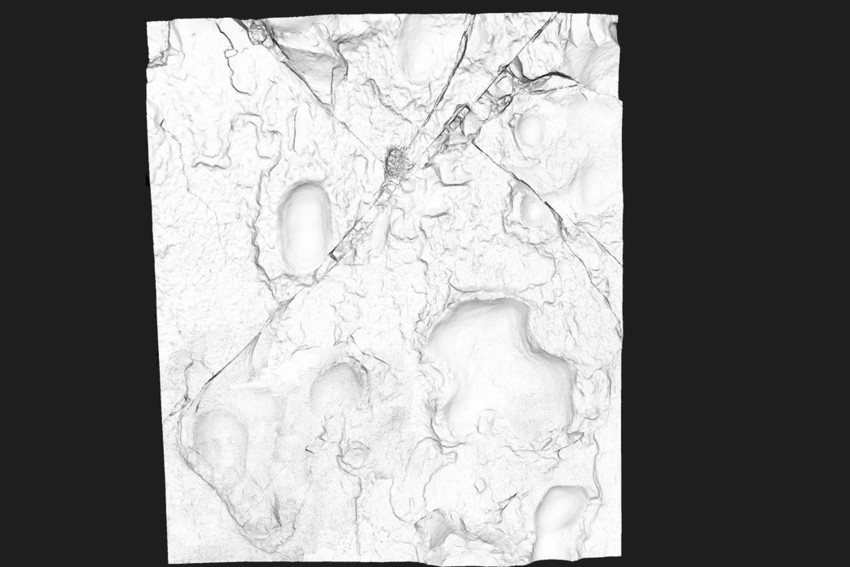 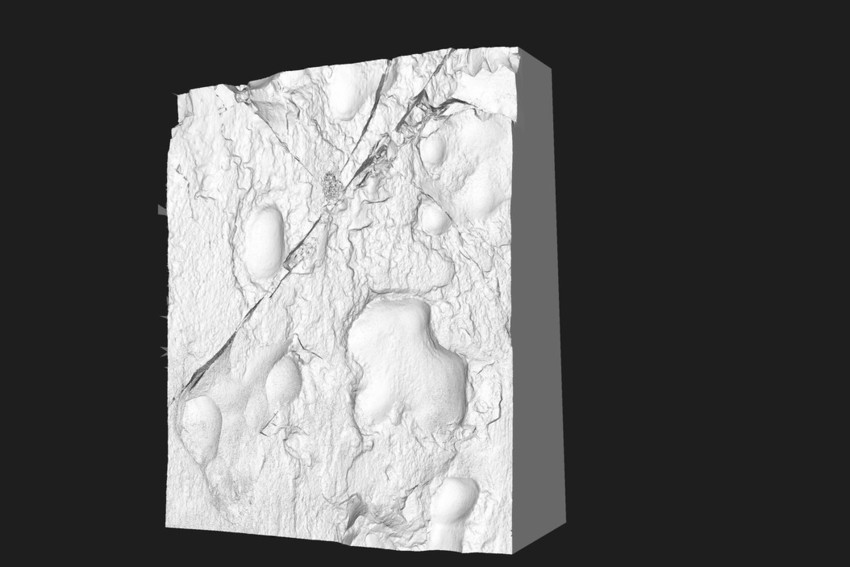 Notable moments included our first trip to see the prints and Malkani's excitement as years of preparation came to fruition. Over the coming days, our film-making colleague Luke Tchalenko shot hours of vivid footage of the trip, capturing the growing enthusiasm – and some moments of apprehension – of both the team and the local population, who are extremely proud of their region and the interest it creates. 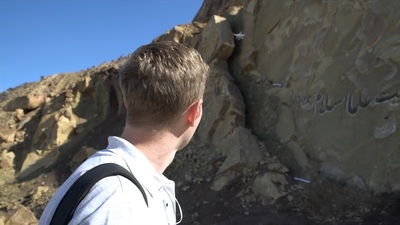 Ross recalls some particular moments of the trip: “Mounting the bucket and working with the excavator operator to move me into the correct position was another great moment of getting to know the local team. Our meeting with a senior local official who was located two hours drive along the highway and had the power to say yes or no to us working at the site was another curious encounter. He was quite the character and features in a portion of Luke's film.” Fortunately he gave us his blessing. “Lastly,” continues Ross, “also hearing that due to the chance of hidden improvised explosive devices appearing at the site overnight, we would be only have one full day to capture the full 10X7-metre facade.” 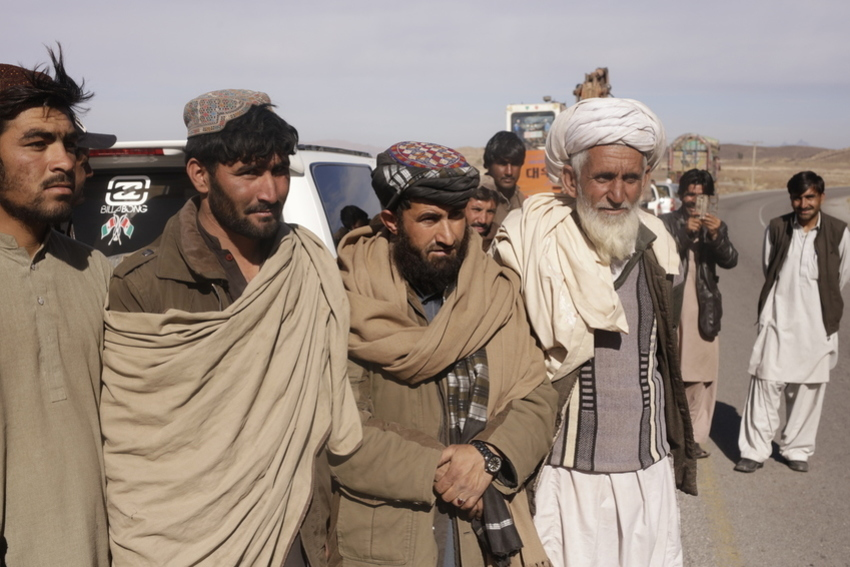 Pashtun locals gather to watch the work on the rock face 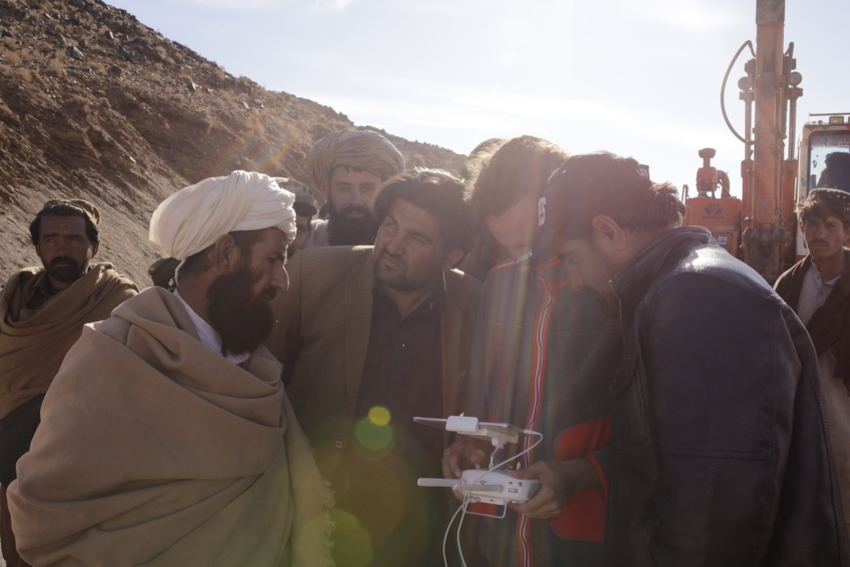 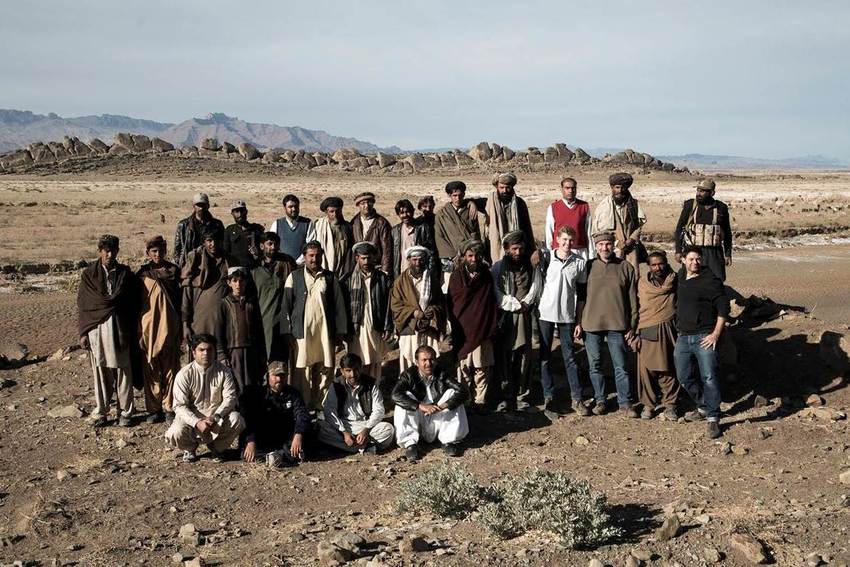 But the demands of physically recording the site are only a small part of this scientific quest. During our consultations with many paleontologists and sedimentologists, the markings at the Zhob site have not been conclusively accepted or disproven as a ‘trackway’, or distinct trail of footprints. Experts in paleontology, and specifically in the identification of dinosaur trackways, say the markings do not show a consistent, extended footfall and other foot characteristics to indicate that they are biological in nature, ie made by a living creature. Meanwhile, experts in geology are by their own admission unable to provide a full explanation of how they could have been formed by sedimentary processes.

At the same time, similar markings have been observed in other parts of Pakistan where fossilized dinosaur remains were discovered. This raises the question of whether these may yet prove to be footprints of a potentially new or crossed species of dinosaur, displaying the morphological features of both sauriscian and ornithiscian dinosaurs. Since all dinosaurs fall into either category, with only very rare examples of mixed morphologies of the two, it is a controversial hypothesis.

It is also arguably unprovable using rock markings alone, without actual remains that were found near the tracks. And even supposing any of the ‘author creatures’ died in the immediate area, finding their remains is highly unlikely after 70 million years of glaciation and erosion, and the needle-and-haystack nature of paleontological digging. Especially in a location like Balochistan, where our team had to have armed guards at all times due to inherent security threats.

But even if not fully conclusive, the discovery of more similar markings showing a regular pattern of motion would strongly support the existence of such a ‘revolutionary’ titanosaur. In July 2018, with Factum Foundation’s support, the Pakistan Museum of Natural History will revisit the site at Zhob, and together with Mr. Malkani, use an excavator to remove further layers of sandstone beside our markings. This will hopefully reveal further manus (forefoot) and pes (back foot) prints in anticipated points marked in the photo, thereby indicating regular footfall. 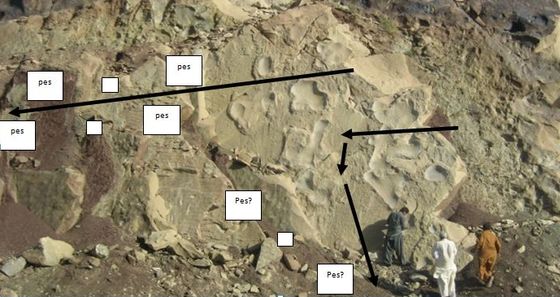 The expected alternating pes and manus (small white box) of upper track of one animal shown by upper large arrow. Arrow shoes movement direction. Small white block are for manus and larger block are for pes

And if that happens, the scientific debate around the Zhob markings will really start to hot up.

Technology, especially high-resolution 3D recording mixed with colour and multi-spectral data, is facilitating a new type of connoisseurship - one that brings forensically accurate date to support knowledge and experience. The data that was recorded of the markings on the fossilised rock near Zhob will allow the geologist Sadiq Malkani and others to prove or deny that they are titanosaur tracks. The first phase of the digitisation captured the visible data and focused the scientific debate. The next phase will establish which point of view is more correct. The work will continue until the presence of the giant Sauropod can be proved or disproved. Factum Foundation is delighted to be working with the Museum of Natural History in Islamabad to help preserve the data in digital form and to contribute to the scientific debate.

The excavation work will take place with the kind permission and assistance of the regional authorities, and will be filmed for inclusion in a documentary film about the project shot and produced by Luke Tchalenko.