In March 2018, Factum Foundation’s collaborative effort with the Trust for African Rock Art (TARA) and the University of Calabar (UNICAL) to preserve the Bakor monoliths developed through two significant milestones in the project: the photogrammetric recording of the top half of a monolith in the Metropolitan Museum of Art, New York, and the successful completion of a conference hosted by the Department of History and International Studies at UNICAL. In addition to this, a short period of fieldwork contributed to the survey of the major monolith sites begun in October 2016.

Factum Foundation would like to thank Yaëlle Biro and the Department of Africa, Oceania and the Americas at the Metropolitan Museum of Art, New York, for their assistance in the realisation of this project. 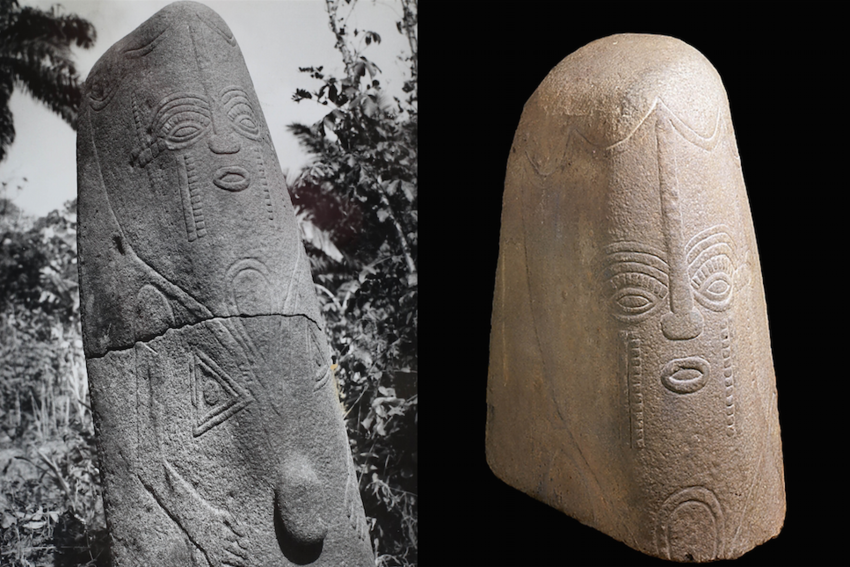 Ntitogo monolith pictured in Allison's survey and in the Metropolitan's collection

Included in the 2015 online publication of the paper 'Cross River Monoliths: in critical danger of total destruction' by Dr. Ivor Miller and Dr. Abu Edet was an image of the base half of a monolith pictured amidst the ashes of a recent fire. It was subsequently identified among the photographs from the survey carried out by Philip Allison in the early 1960s with its top half attached (though with the large crack that would have enabled its separation clearly evident) at a site identified as ‘Ntetakor’, an incorrect rendering of the actual name ‘Ntitogo’.

Circulation of this image online led to the recognition of the top half of the monolith in the Metropolitan Museum of Art, New York, where it entered the collection as part of the bequest of Nina and Gordon Bunshaft, who in turn had acquired it from Fatou Touba M’Backe Gallery, New York, in 1985. Research thus far has been unable to locate any information about this gallery, but it is likely that the fragment would have left Nigeria at some point in the late 1960s or early 1970s (during the period of the Biafra conflict and its aftermath), before entering the international antiquities market. 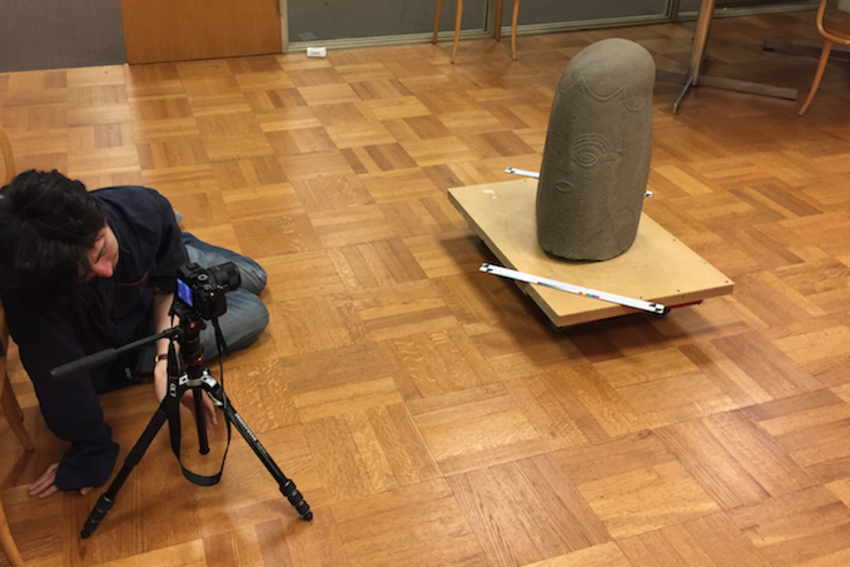 Recording the Ntitogo monolith fragment at the Metropolitan

Factum Foundation’s initial visit to the Bakor region in October 2016 included a visit to Ntitogo, where Alexander Peck recorded the base in situ using photogrammetry. Following the announcement of UNICAL’s conference, the idea of presenting a project that united the recordings of the top and bottom halves of the Ntitogo monolith suggested itself as an appropriate subject by which to explore the potentials of 3D imaging technologies in the conservation of the sites. Permission was secured from the department of Africa, Oceania and the Americas at the Metropolitan and the work was carried out in early March 2018, shortly before the commencement of the conference. After quickly processing the data, scale versions of the top and bottom halves were 3D printed in resin as a showcase to be presented in Nigeria. 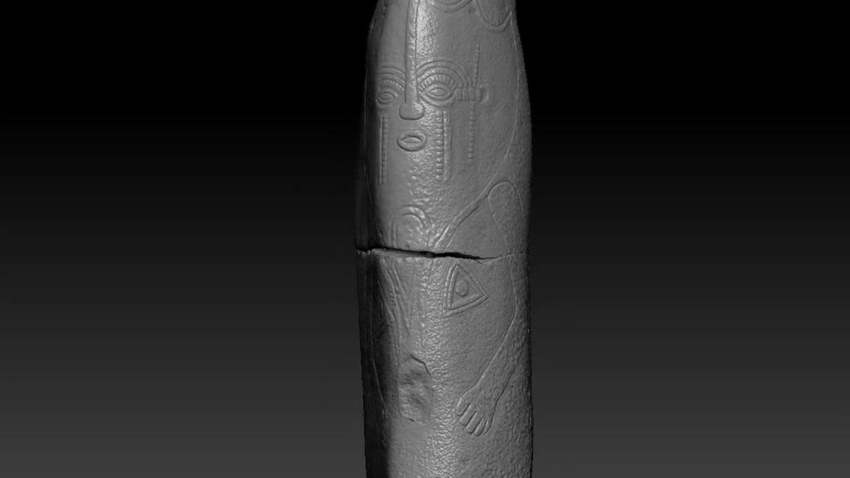 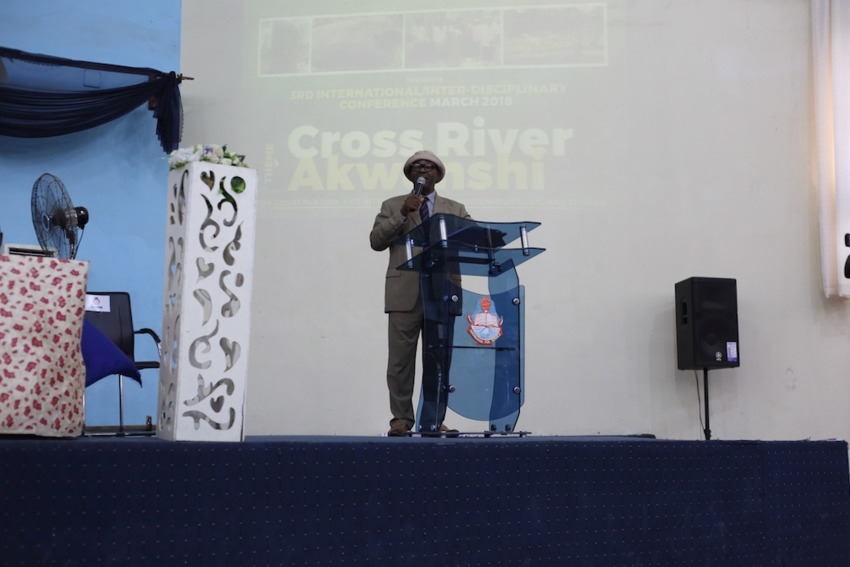 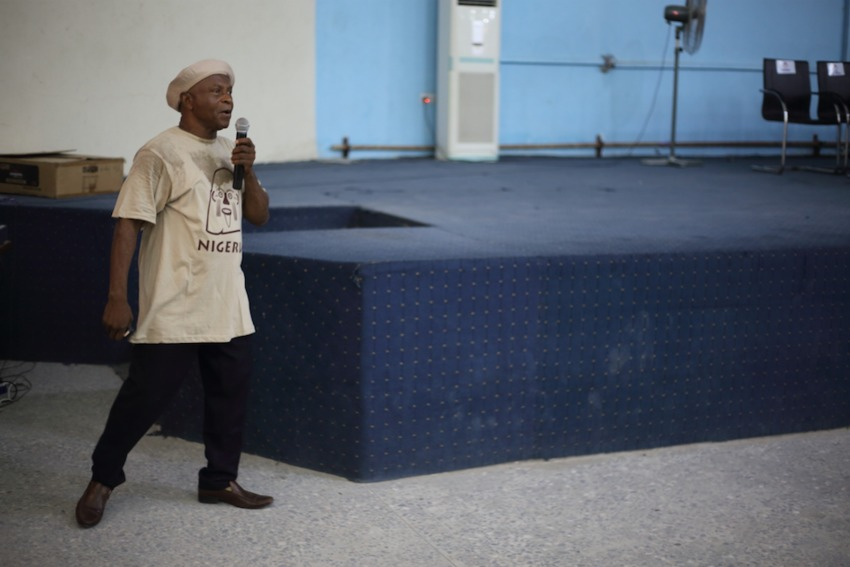 The two day conference on the preservation of the Bakor monoliths brought together leading Nigerian and international experts to discuss the subject. The defining refrain was the lamentable disinterest and total lack of support within the Nigerian government for the conservation of the monoliths and their sites, as was picked up by a news report in the Guardian, Nigeria. In terms of more specific research into the age of the monoliths, it was generally accepted that Ekpo Eyo's tentative archaeologically based dating required further support to be properly established.

An enlightening context to the monoliths was provided by Dr. Miller, whose paper featured a selection of images of stones from Ékpè Lodges in the Cross River region. Ékpè is a secret initiatory society that was the traditional administrator of justice in pre-colonial communities and which has a number of important cultural practices including masquerades and ritual dressing of stones. The paper linked living approaches to the stones found in Ékpè lodges to the more ancient monoliths of the Bakor people. Dr. Miller's research is aimed at placing the monoliths within the wider perspective of Cross River state culture and is therefore a valuable contribution to the objectives of the project. 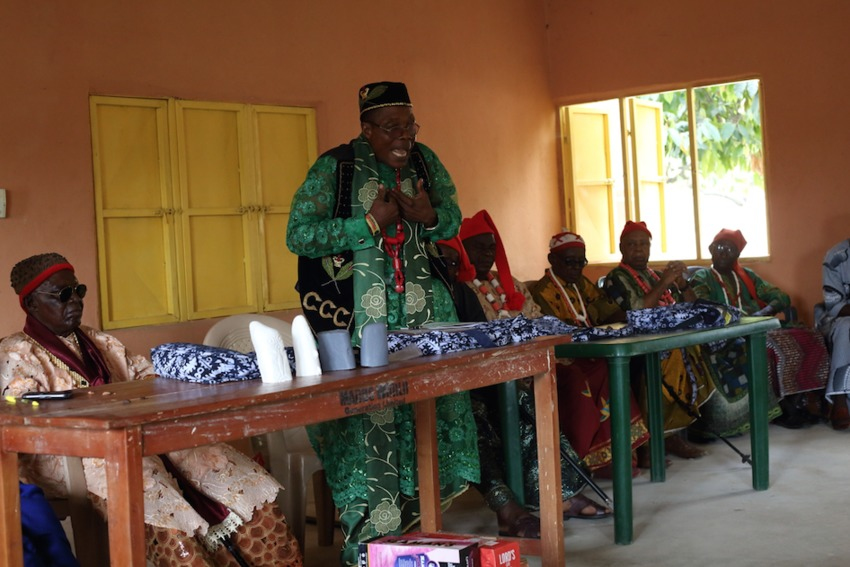 Meeting of the clan chiefs at Akumabal 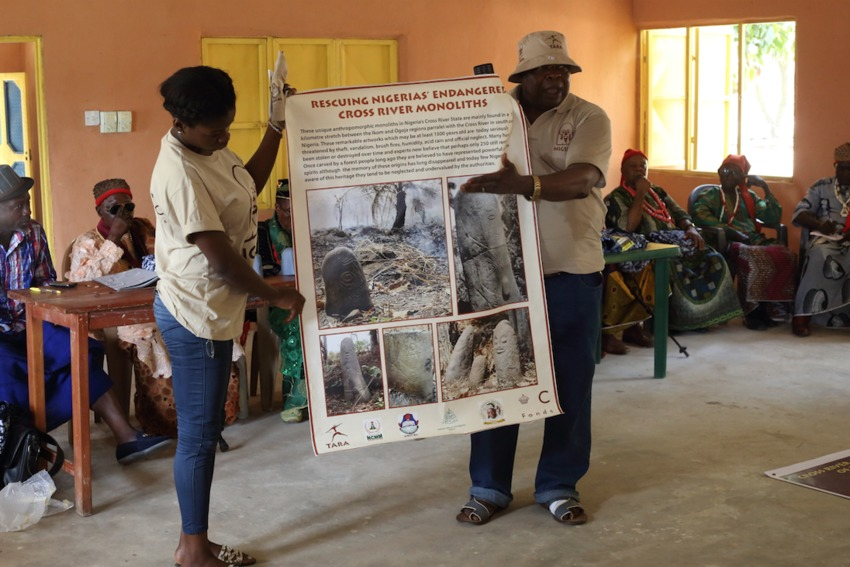 Immediately following the conference, the team journeyed to the Bakor region to update community leaders on its outcome and the general progress of the project, as well as to visit remaining sites. At a short-notice meeting of the clan heads in Akumabal, the Ntitogo monolith sections and two other printed and cast monoliths (from Alok at Njemitop) were presented to the clan leaders of Bakor as a gift from Factum Foundation. A short presentation was also given to the assembly that outlined some of the ways in which digital technologies could be used in the preservation and interpretation of the monoliths. It was evident that the team's return to the region was taken as a significant indication of the seriousness of the project; one of the frequent complaints from community leaders is that researchers come with many promises, receive help and then fail to share their work afterwards. The meeting concluded with the performance of a masquerade ceremony and the suggestion of the idea of a Bakor cultural week in the near future. The team visited three more monolith sites to survey the condition of the stones: Manden, Eting Nta and Oyengi. Manden is important on account of its monoliths being carved out of limestone rather than the usual basalt. Sadly, the monoliths are almost entirely destroyed and the site has been subsumed by yam plantations and consequently it is periodically burnt to clear vegetation. 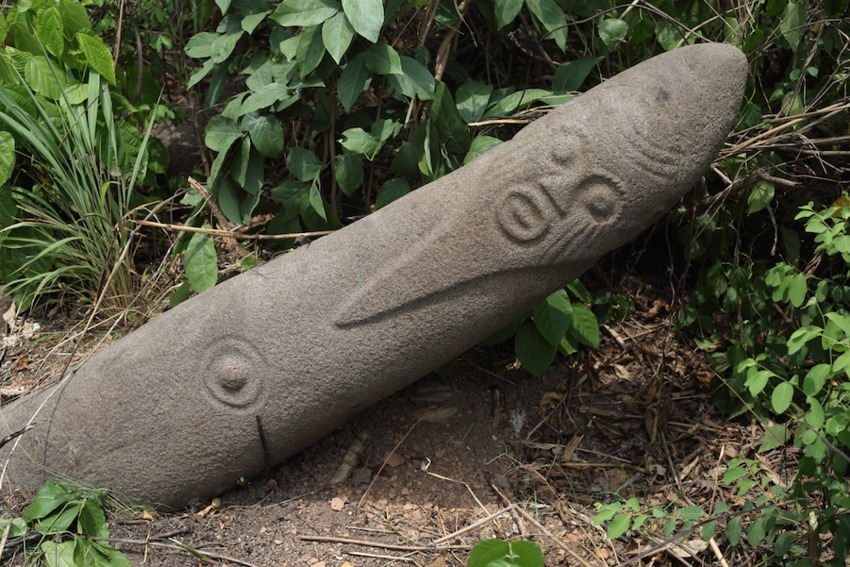 Eting Nta presented a more hopeful situation with a number of impressive monoliths in relatively good condition in spite of the evidence of fire. The site is the original location of a complete monolith that is now in the Musée du Quai Branly (Paris) that was photographed by Allison. Another of the monoliths from the site included in Allison's survey was recently sold for €192,300 by Binoche & Giquello auctioneers (Paris), the provenance of which states that the stone was collected in 1968 then given an exit permit from the National Commission for Museums and Monuments, Abuja, on February 1st 1969 before being exported through Togo. Also from Eting Nta is a monolith listed at Galerie Pierre Dartevelle (Brussels) catalogued by Allison as E10. 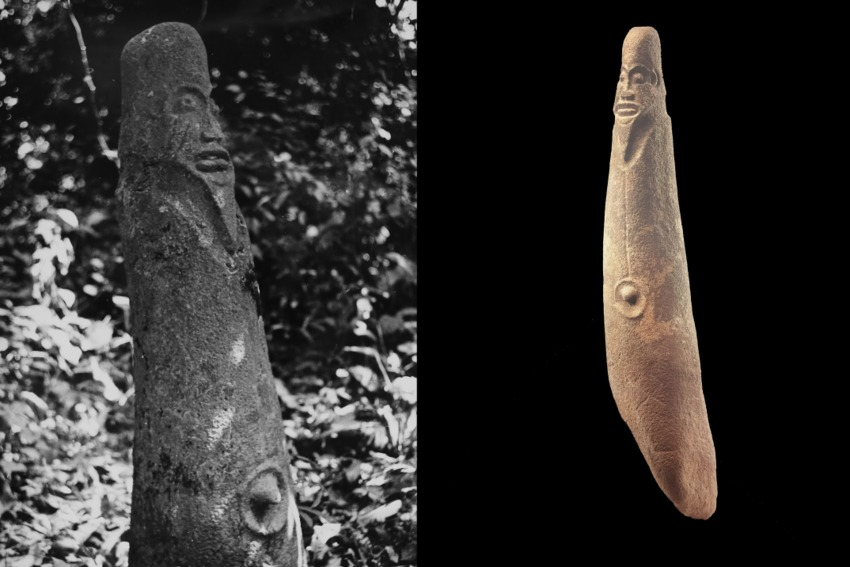 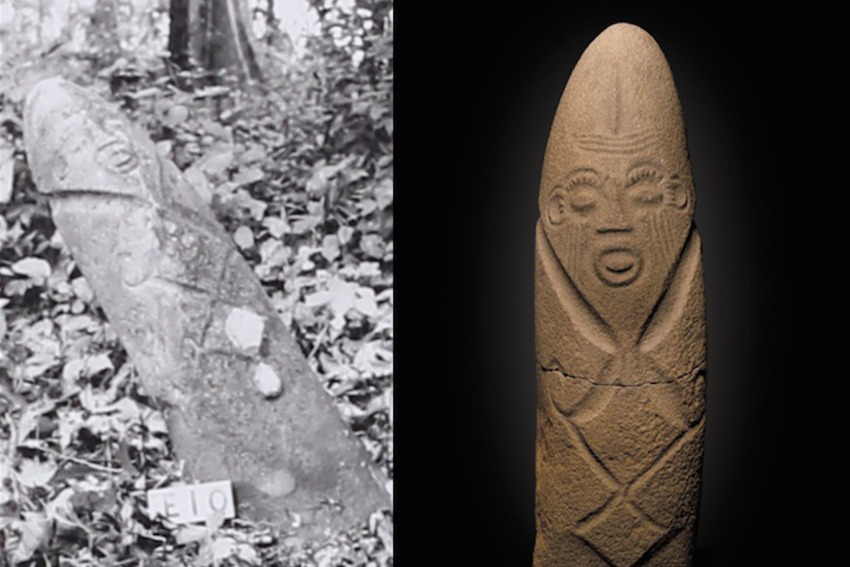 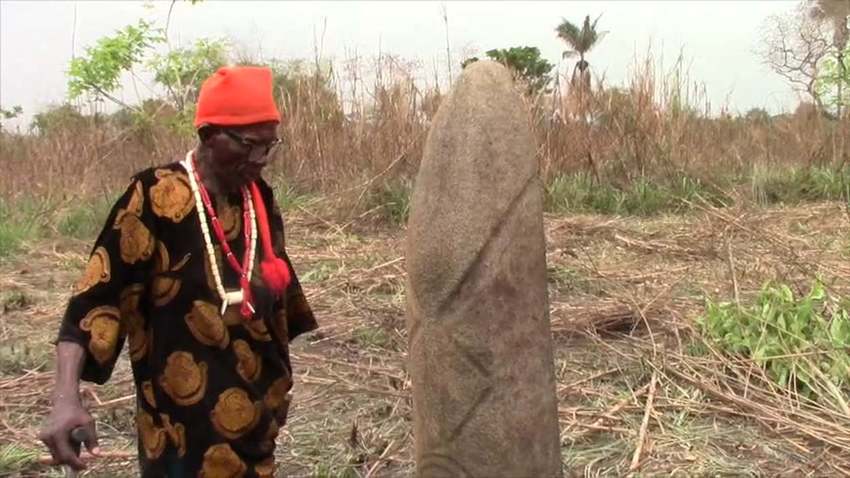 Oyengi is another unique site as a result of its distinctive phallic type of monoliths. Of the five photographed by Allison (four carved, one uncarved) only one carved and one uncarved remain. The chief of Oyengi received our team with welcoming expressions of support and accompanied us to the site with a group of elders. Standing next to the one remaining monolith he decried their disappearance and entreated our team to discover their current whereabouts. Subsequent research has at least discovered one of the monoliths from the sites, marked as OY3 in Allison's survey, also listed at Galerie Pierre Dartevelle. 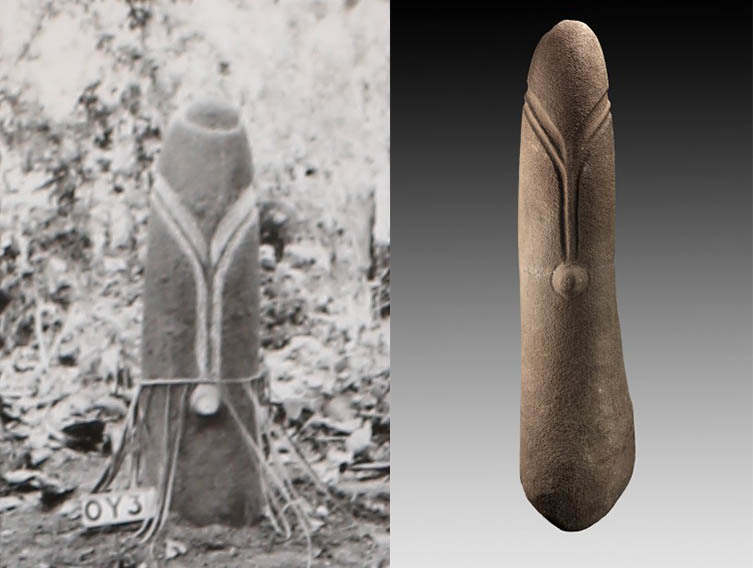 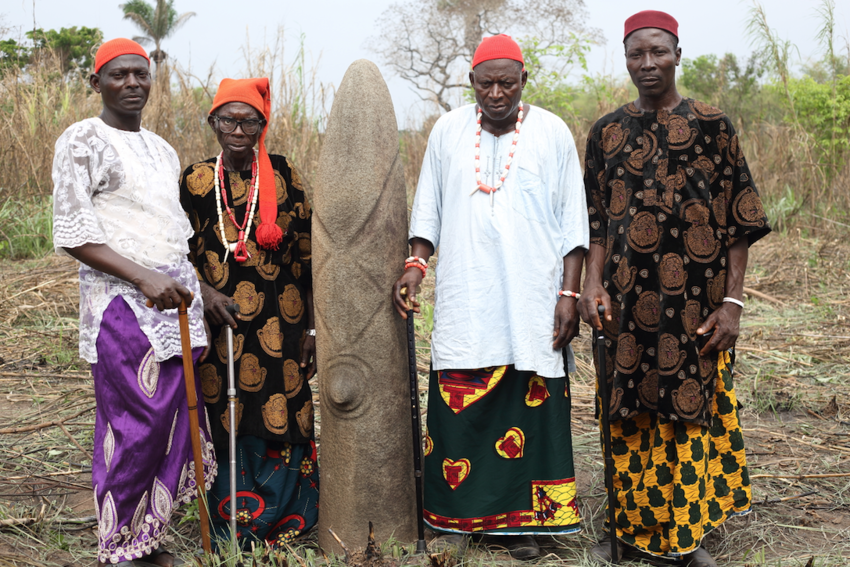