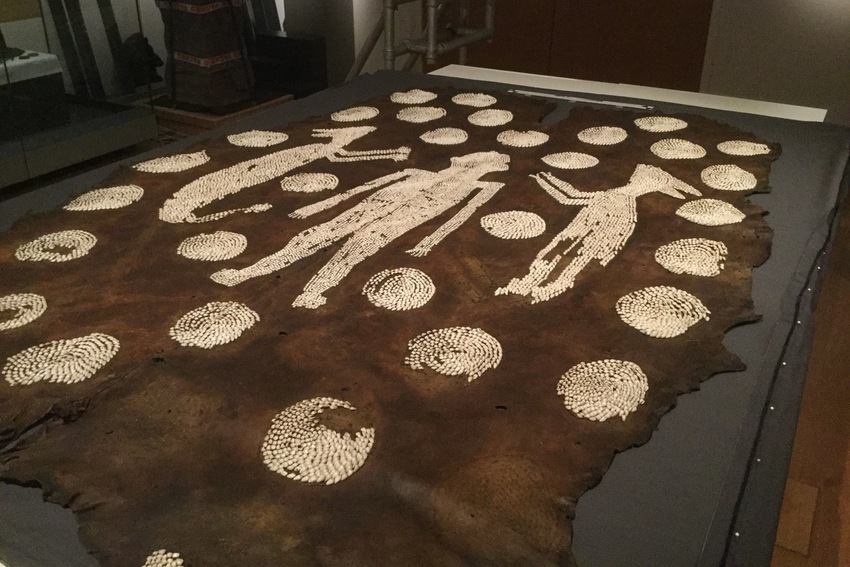 Powhatan’s Mantle (leather, shell and sinew; 235x160 cm) is one of the most significant pieces at the Ashmolean Museum (Oxford) and was part of the original Tradescant collection catalogue of 1656. It was initially thought to be a ceremonial mantle belonging to the Powhatan chief Wahunsunacock, but now is considered more likely to have been a hanging. The mantle was probably acquired by Younger John Tradescant during a trip to Virginia although how exactly it came to be part of the collection is unknown.

The mantle is composed of four white-tailed deer hides that have been trimmed and sewn together with sinew. The elaborate shell beadwork decoration consists of a central standing figure flanked by two opposed four-legged animals in profile, which are thought to represent either a mountain lion or a wolf and a white-tailed deer. The circles may represent the settlements and tribes of the chiefdom. 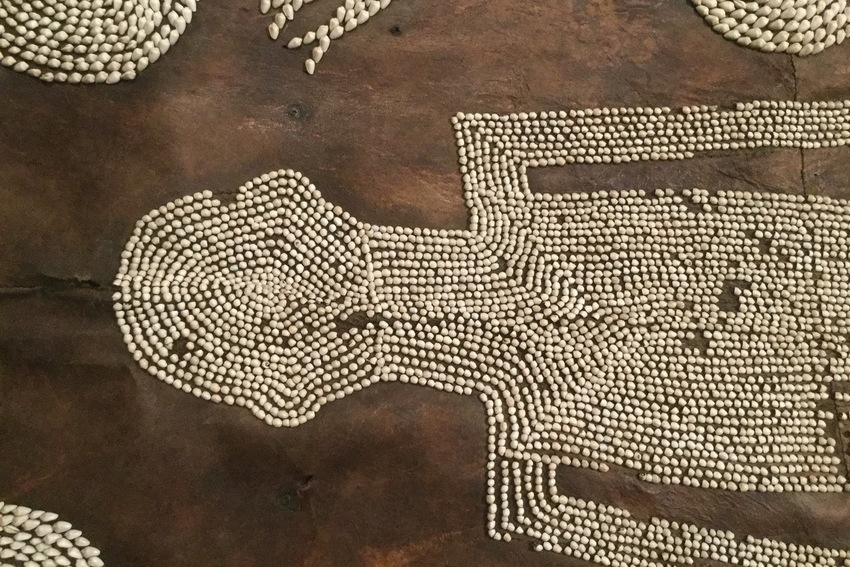 Detail showing the central figure on the mantle 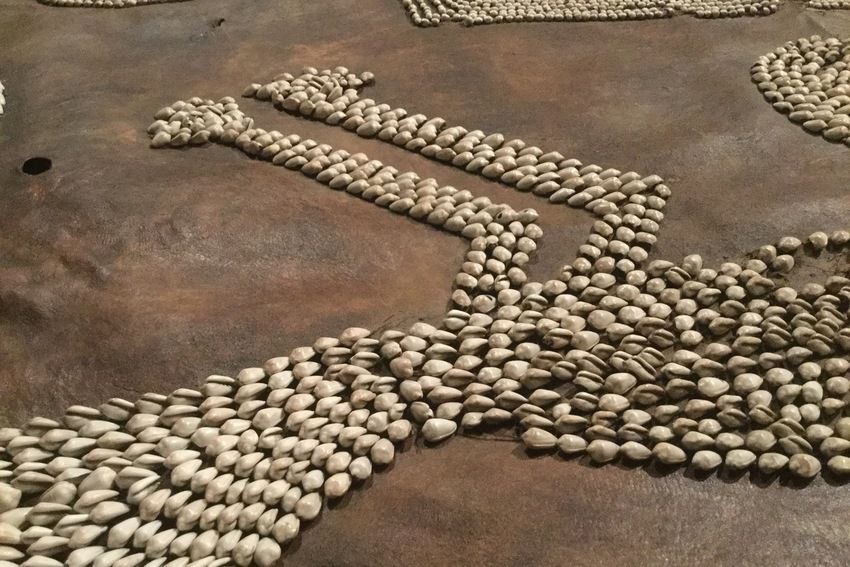 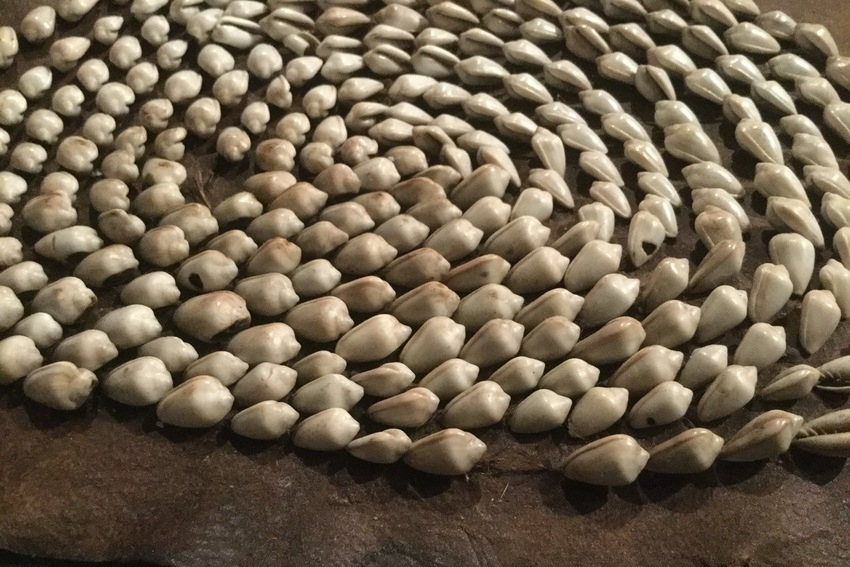 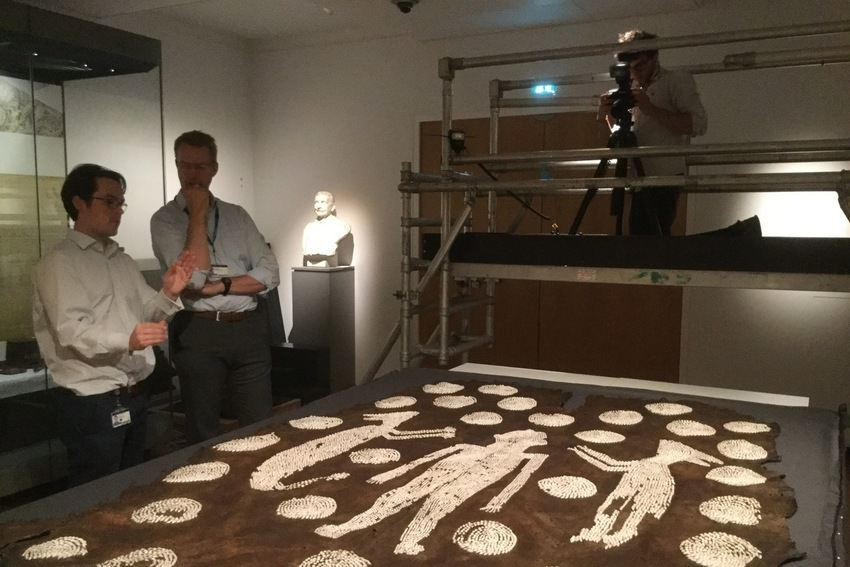 Curators at the Ashmolean Museum watch the recording equipment setup 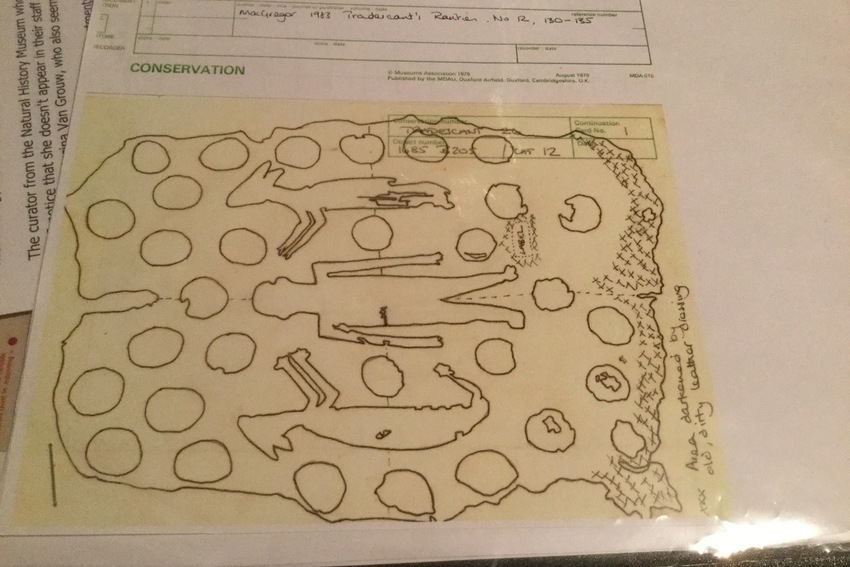 Sketch of the mantle and it's beadwork decoration

In May 2017, Factum Foundation carried out the digitisation of this important artefact for the purposes of conservation. During the refurbishment of the mantle’s display case, we had the rare opportunity of recording the surface using photogrammetry as a non-contact high resolution technique.

The project was carried out by Manuel Franquelo and Pedro Miró from Factum Foundation together with André P. Jáuregui and Halley E. Ramos, two students from the Columbia University (New York) Preservation Technology Studio. Factum Foundation is running a series of workshop and training sessions in collaboration with the Graduate School of Architecture, Planning and Preservation at Columbia. Jáuregui and Ramos spent some months interning at Factum, where they were able to apply their knowledge of recording techniques for digital preservation to existing projects.

The aim of this recording was to employ photogrammetry to obtain high-quality 3D and colour data of the complex surfaces of the mantle (front and back), its shell embroidery and small surface punctures, for further study. The digitisation resulted in a highly-detailed model of the mantle’s front. The back was impossible to record with photogrammetry because the Perspex slab on which the mantle was lain proved too thick and too reflective to obtain usable colour data. The colour was instead obtained using a flat-bed scanner and the results processed together with the rest of the photogrammetry. This part of the process was carried out by the conservation department at the Ashmolean museum.

As in other Factum Foundation projects, we have provided the Ashmolean Museum with a simple, easy-to-use browser interface that displays colour and 3D data in parallel. This online browser tool is ideal for conservators, who are now able to inspect small details from the original mantle without the need for removing the delicate object from its display case.

The mantle cannot be vertically positioned due to the fragility of the seams. For the recording process, it was placed on a translucent Perspex slab (235x160 cm) parallel to the surface of the floor and we had to use scaffolding to access the central areas of the mantle. We also used the scaffolding to attach our lighting system, as well as to get close to the surface of the mantle and capture images from multiple angles.

Two sets of images were obtained; one set was meant to correctly perform a texture (i.e. colour) reconstruction (nadir images maintaining light intensity and colour calibrated with an x-rite colour chart); the rest of the images were used for geometry reconstruction. The general shape and volume of the object was recorded first, then a step-by-step close-up strategy was followed. The main difficulties were linked to the necessity of avoiding reflections in the leather (which meant the loss of light intensity) whilst both maintaining a correct exposure and also not losing information on the shells because of their whiteness. This was achieved to a point. In the images, some colour channels on the shells are slightly clipped even despite later post-production. In addition, reflective and poor contrast surfaces are challenging for photogrammetry. Artefacts such as small holes on some shells (see results below) might have appeared for this reason.

In the recording, a total of 2103 images were taken of the mantle. The basic equipment used consisted of a Canon 5DSR camera with a Sigma 50mm Art 1.4 DSM lens. All the images were captured in RAW format (CR2) and were also provided to the Ashmolean as part of the documentation process. Due to the problematic the shell surface, a complex multiple-light-source system was used, positioned at 45 degrees to the object and with cross-polarised technique. Cross-polarised capture allows for the elimination or reduction of the reflections in scanned materials. 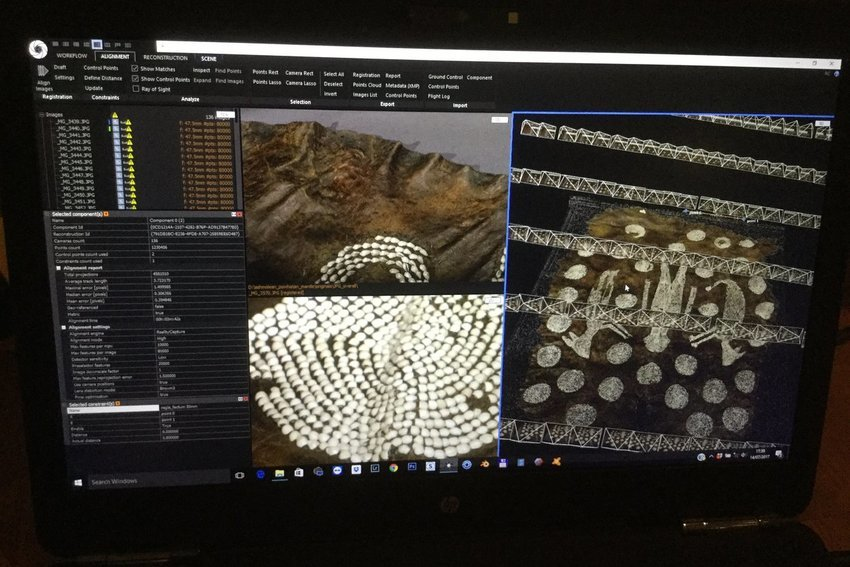 Pre-processing the data on a laptop on-site 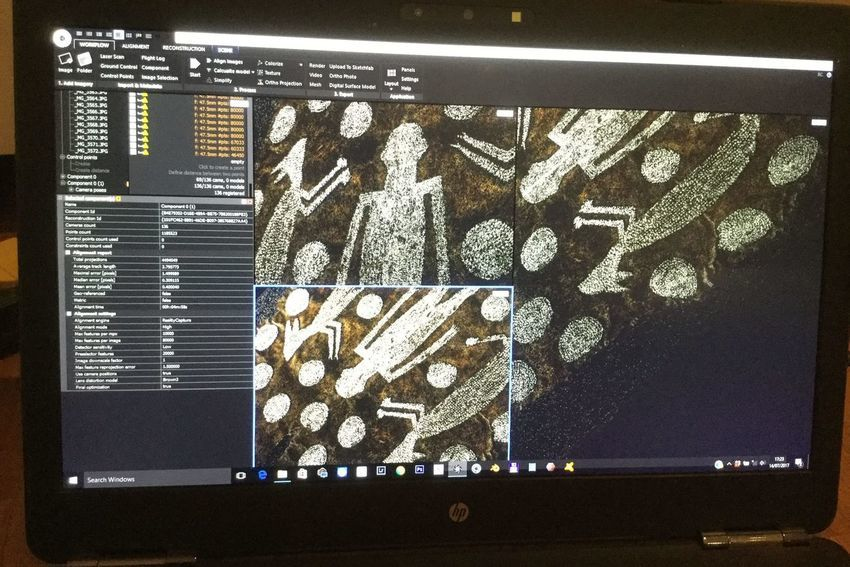 The Raw images were developed using Adobe Lightroom to reduce highlights, lighten shadows, and for colour correction using a classic x-rite colour chart. This process is essential for enhancing the quality of the image in preparation for running them through the photogrammetry software. Once all the images had been processed in Lightroom, they were loaded into Capturing Reality and aligned, obtaining a point cloud with 11923762 points. Factum Foundation has been using Reality Capture, one of the most powerful software on the market, and one which has allowed us to obtain incredible models for conservation purposes, for most photogrammetry projects realised in 2017.

The final model had a raw polygon count of 835.5 million; this had to be reduced without losing surface quality to a more manageable polygon count of 14 million. The average resolution between measured points was around 200 microns – a level of detail below 1 mm. The software can also generate ortho-colour images of the whole mantle, which are very useful images for study as they provide exact dimensions of the object. The final image size was around 16384 x 16384 pixels.

Recording the back of Powhatan's Mantle 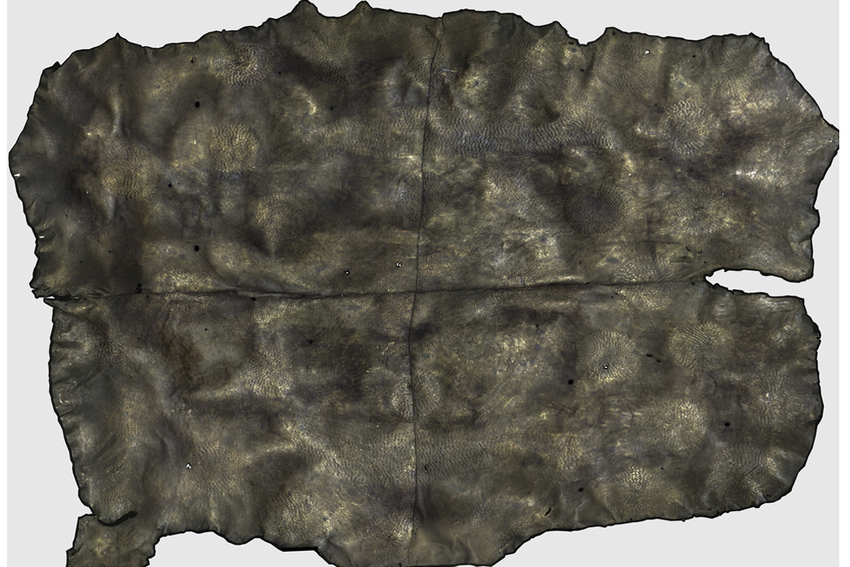 Stitched colour image of the back of Powhatan's Mantle 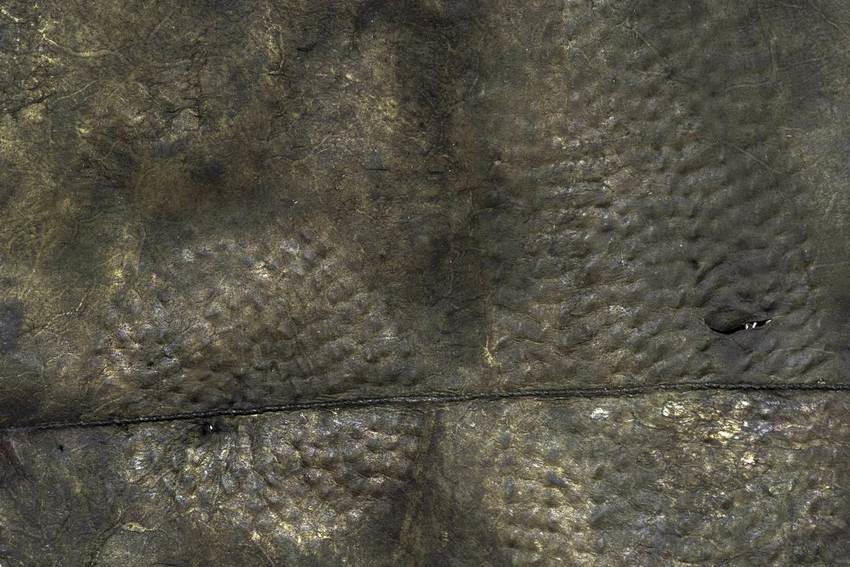 The 2D scans of the back taken with the flat-bed scanner were WB and exposure corrected using a grey chart belonging to the Ashmolean team. Some images were slightly out of focus, probably because the flat-bed scanner lens focussed on the dirt and tiny dust particles on the Perspex slab. Moreover, the colour on this side of the mantle could not be adjusted as there was no reference chart.

The stitched 2D representation, from 109 images provided by the Ashmolean, is not geometrically perfect for an optical reason: perspective and viewpoint change when moving. Stitching several images with viewpoint change is possible, but not if the object represented in the image has depth. The mantle’s volume introduced parallax errors that can be seen as “ghosts” in some areas of the mantle, something especially noticeable along the outer perimeter. This can be manually fixed with time-consuming efforts and at best, results still won’t be 100% objective.

As the surface was captured and lit with a flatbed scanner linear light system, the 2D representation contained a strong presence of lighting information, that is, shadow information that may not be interesting. This was fixed to appear ‘realistic’ in post-production, although it was not a straightforward process: it was necessary to calculate an ambient occlusion map from the 3D file of the opposite side, invert it and flip it horizontally, and then apply a very simple arithmetical calculation in Photoshop to the 2D flatbed colour map to obtain an albedo map that better represents the colour surface of the object.

The image has been scaled so that the largest side of the mantle measures 235 cm according to Ashmolean’s measurements. The final file provided is an 16bit PSB ProPhoto RGB.

The final results can be inspected through the online browser. Here, the user can swap between the 3D data and colour data, or blend them together and zoom down to incredible detail on the original object.

Factum Foundation provided the museum with both the raw and processed data for their use.