Factum Arte and Factum Foundation digitally reconstructed a damaged Monet´s Water Lilies (1916). The painting, originally in the collection of the Museum of Modern Art in New York, was heavily damaged in a fire in 1958. The burnt painting was donated by the MoMA to NYU´s Institute of Fine Arts.  A guiding factor in this reconstruction was the absence of colour documentation – only one black-and-white conservation image existed –despite the fact that the painting created huge sensation on its arrival at MOMA in the 1950s. 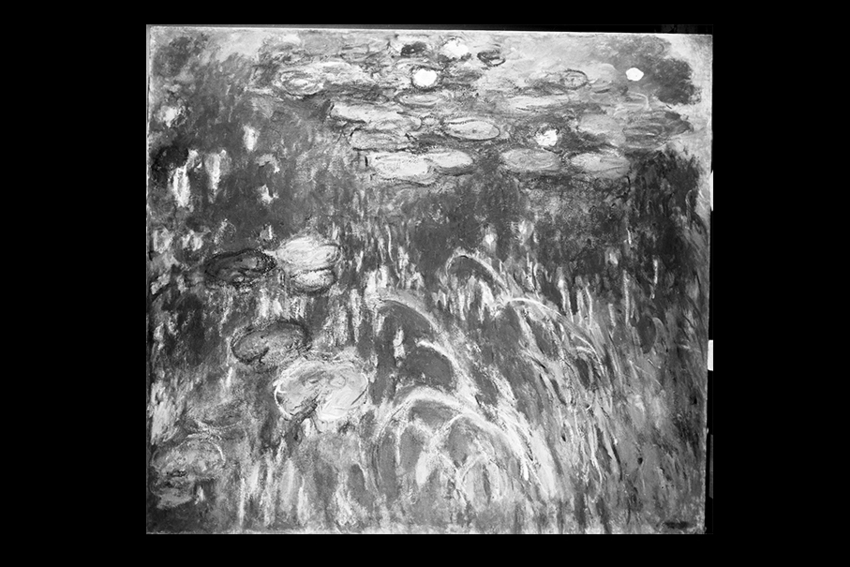 Photograph of Monet´s painting before the fire in 1956

Digitizing the painting
Both the colour and 3D texture of the painting burned surface were recorded using close-range photogrammetry. This is a non-contact technique whereby images of an object are taken with more than 80% overlap at approximately 50cm from the surface. The images are processed with specialised software (RealityCapture in this case) to output a 3D object file and an 8bit image file (colour information).

The surface of the painting was highly reflective –this lead the Factum team to record the painting twice: first with ambient light, then withcross-polarised flash illumination to minimise reflections and thus the potential for noisy data. Areas of the painting were also recorded using Factum’s Lucida 3D Laser Scanner to corroborate the quality of the photogrammetry model. Both 3D models had resolutions within 100 microns. 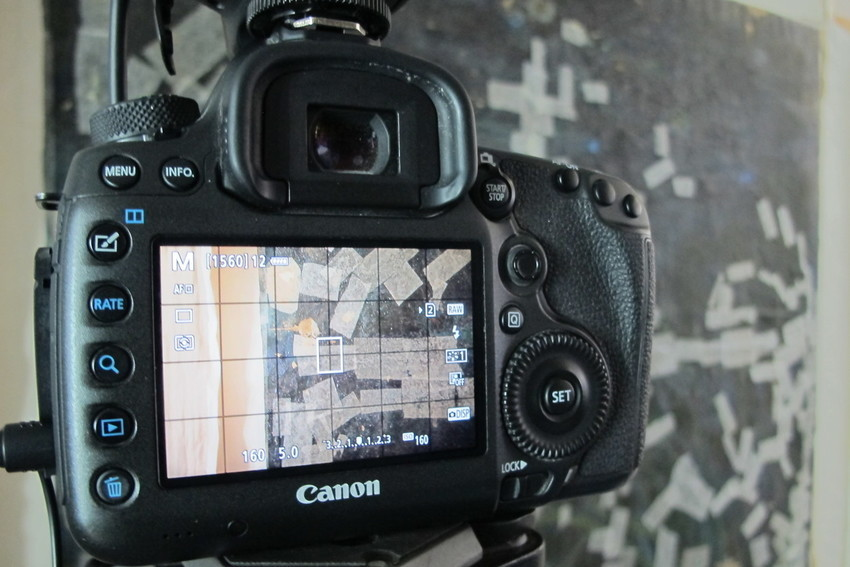 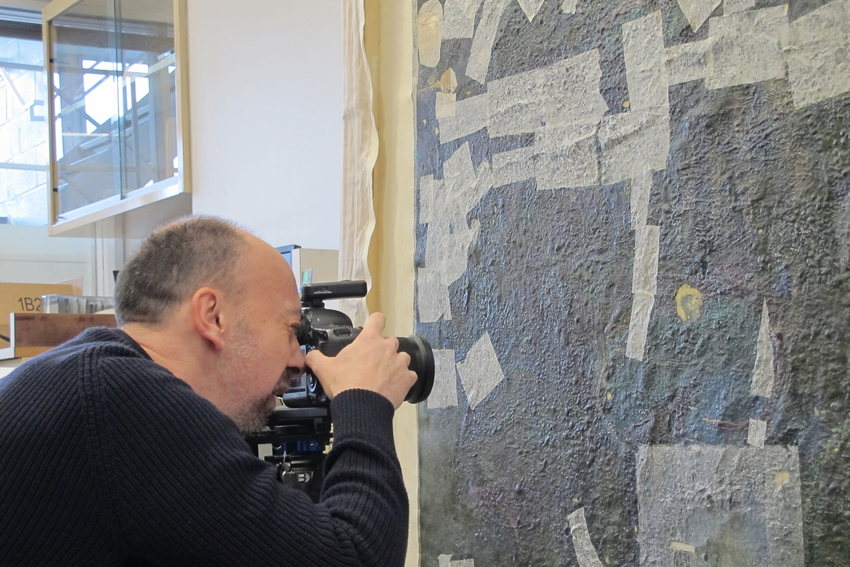 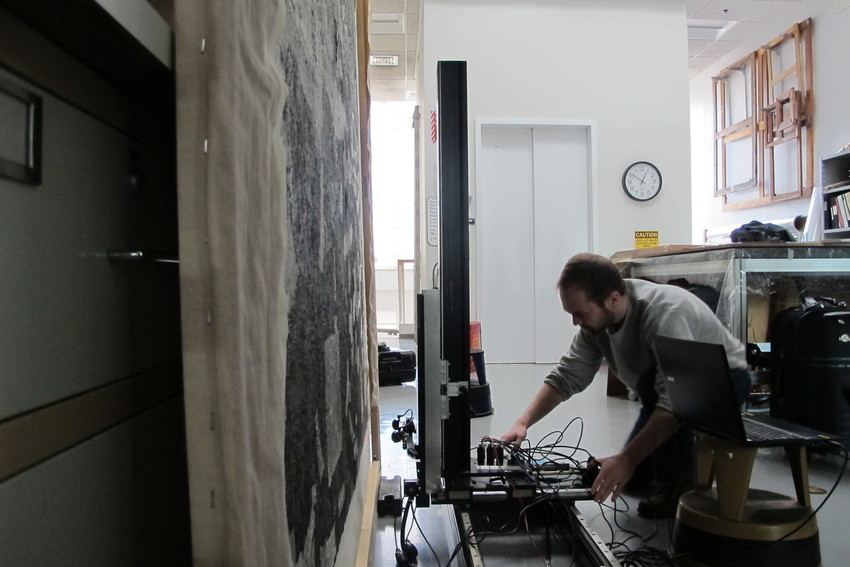 The Lucida 3D Scanner recorded the relief of the painting

Some of the original surface of the painting had survived the fire but the canvas was badly creased, ruptured bubbles had marred the texture, which was also damaged with bumps and scratches. The objective in this part of the process was almost to carry out a physical ‘restoration’ on the surface of the facsimile. The 3D model of the canvas obtained via photogrammetry was converted into a greyscale height-map and printed using OCE’s 3D printing technology. A silicon mould was taken from the 3D print and cast in plaster. 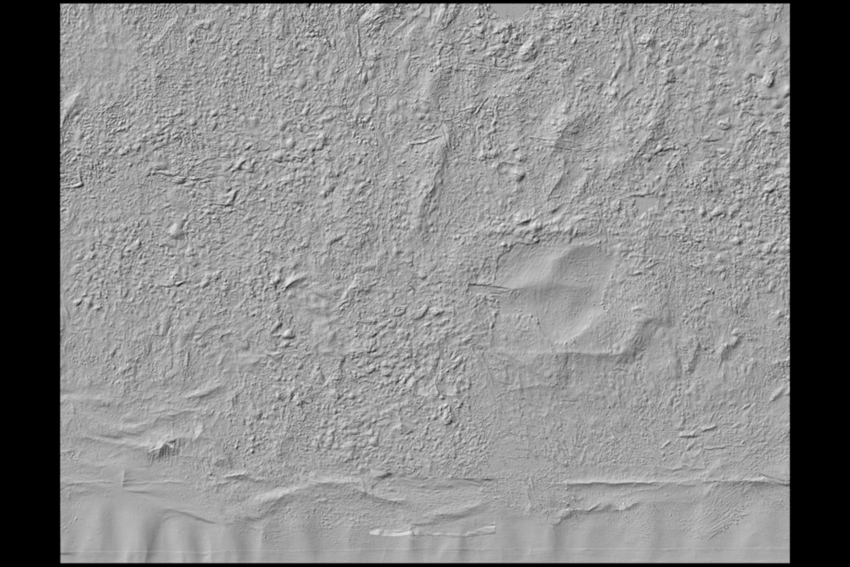 Close up detail render of the 3D scanned surface 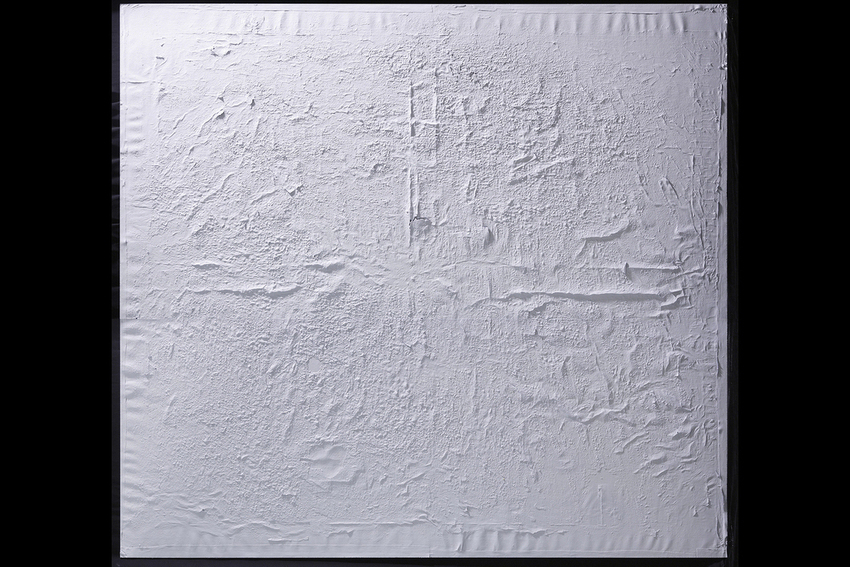 This plaster cast was used as the basis for the restoration: creases were levelled, holes filled, and texture added to the areas beneath the conservation patches. The ‘restored’ plaster cast was used to produce a second silicon mould that was itself cast in gesso. The back of the gesso cast was glued onto a linen canvas, using a vacuum during the transfer to ensure that no air remained between the textured gesso and the linen. 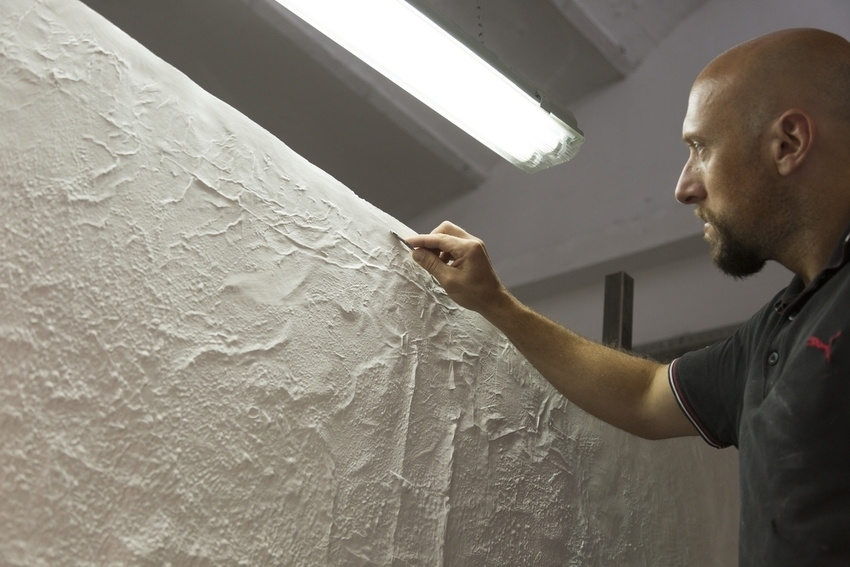 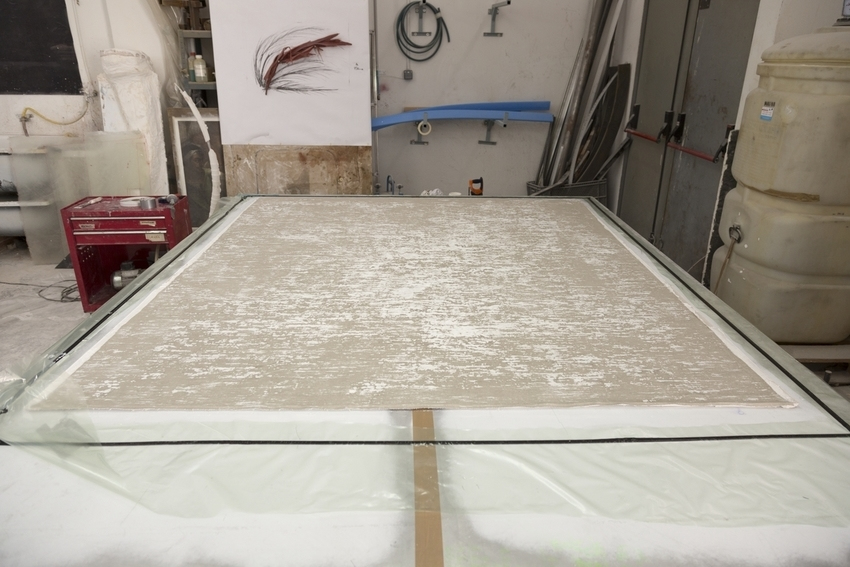 The silicone mould transferred onto a linen skin 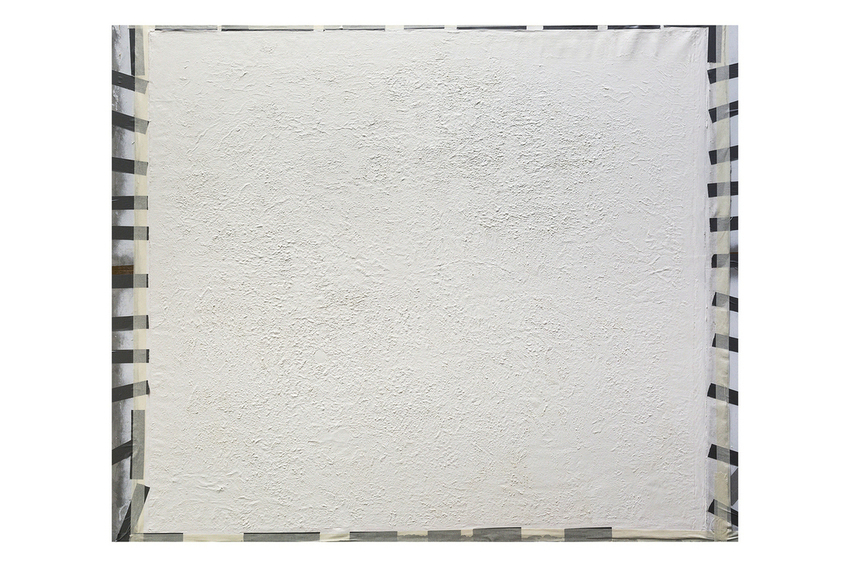 Texture gesso over linen ready to be printed

The image file revealed far more usable data than initially expected: the powerful flashes used to light the painting during the recording had exposed remnants of colour hidden within the charred surface. At this point, the decision was taken to perform a digital restoration in Photoshop, employing the image file as a means to recover as much information as possible from the original. Visible colour was cloned to surrounding areas where colour had been less well-preserved, thus recovering the vibrant colours in the greater part of the canvas. Reconstructing patched or severely damaged areas was more complex; here the existing black and white image was used as a guide when recreating shapes and brush strokes. In some cases, colour was visible even beneath the patches and here too was used to direct the digital restoration. 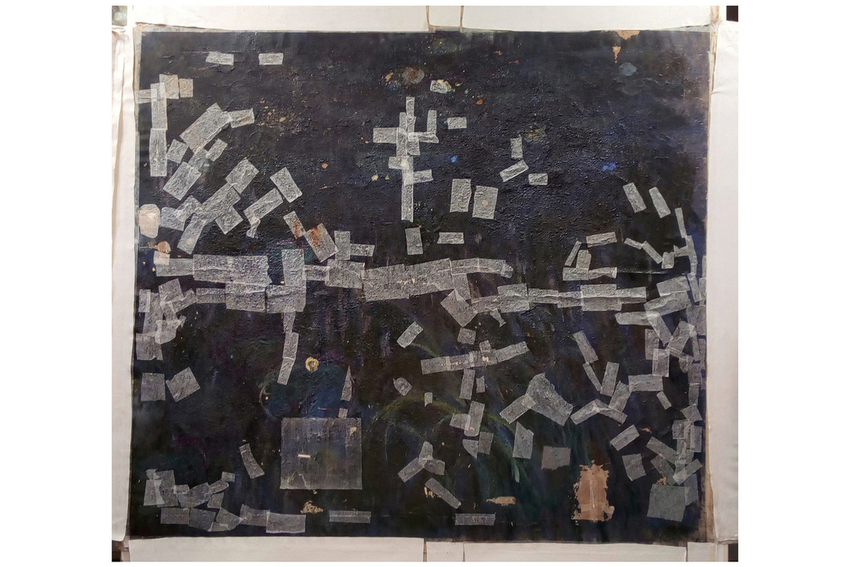 Actual state of the painting after the fire in 1958 Second part of digital restoration after colour reconstruction and clearning. 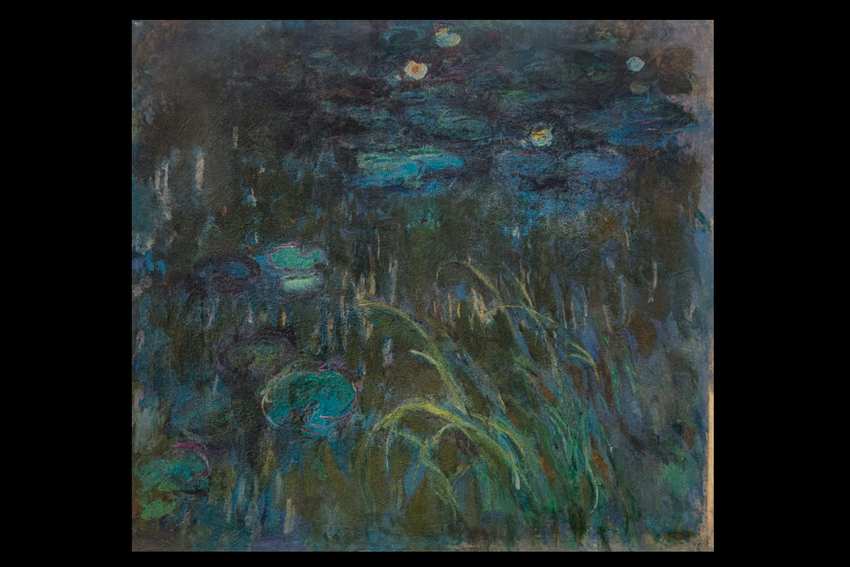 Third part of digital restoration after clearning and removal of consolidation tapes. Files ready to be printed for colour correction

In the early stages of the process, it was unclear whether or not the fire had also damaged the tones of colours exposed in the image file; whether, for example, the pigments had been oxidised and lost their original tone. This issue was approached by analysing Monet’s Water Lilies series from the same period, which would have been painted using similar colour palettes. It was found, for example, that the turquoise and green tones ‘lifted’ from the blackened canvas were almost identical to those used by Monet in canvases of the same time. The blues in our painting, however, had lost their original tones and were corrected in a final adjustment through comparison with this contemporaneous series. 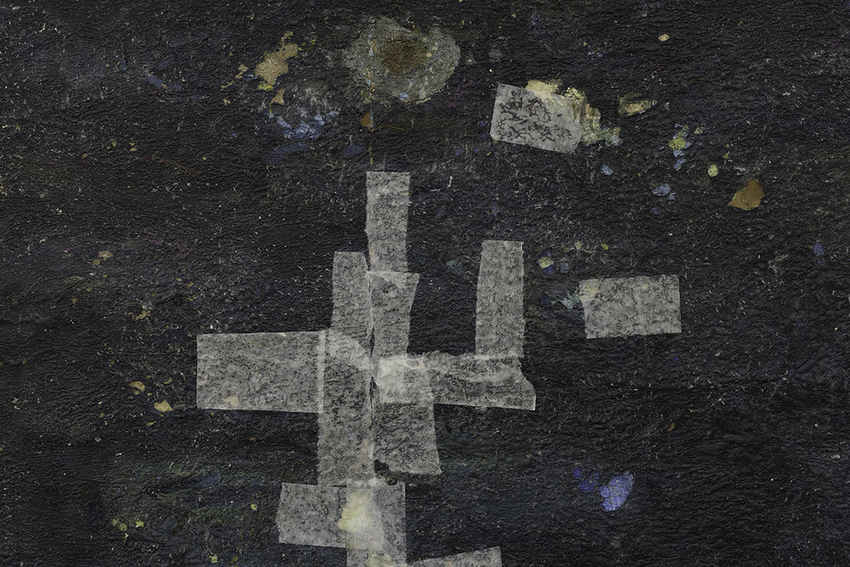 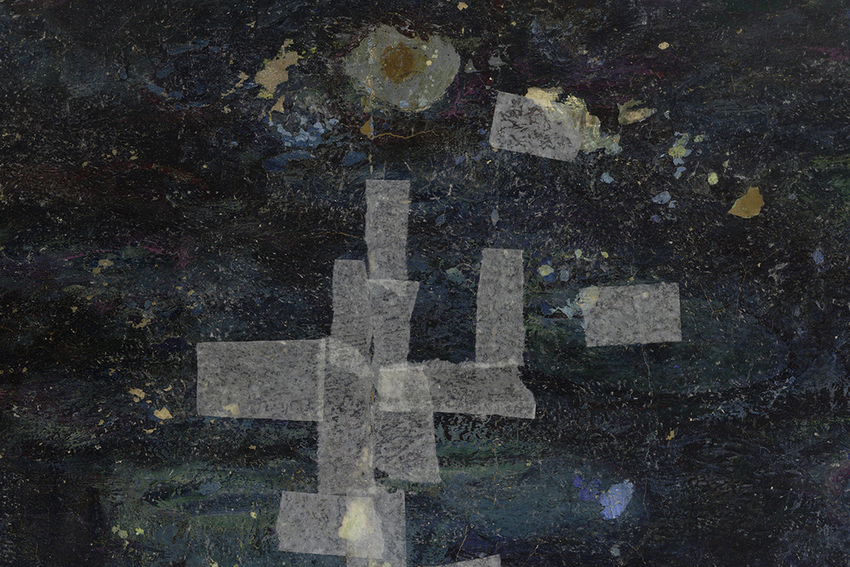 Bringing 2D and 3D together

The colour data was printed directly onto this textured gesso using Factum’s flatbed printers with which it is possible to register the colour very exactly onto a surface, ensuring that the colour is lined up very accurately with texture. For the final varnish, several options were tested before deciding on rabbit glue which gave a semi-matte surface similar to that of other Monet paintings. 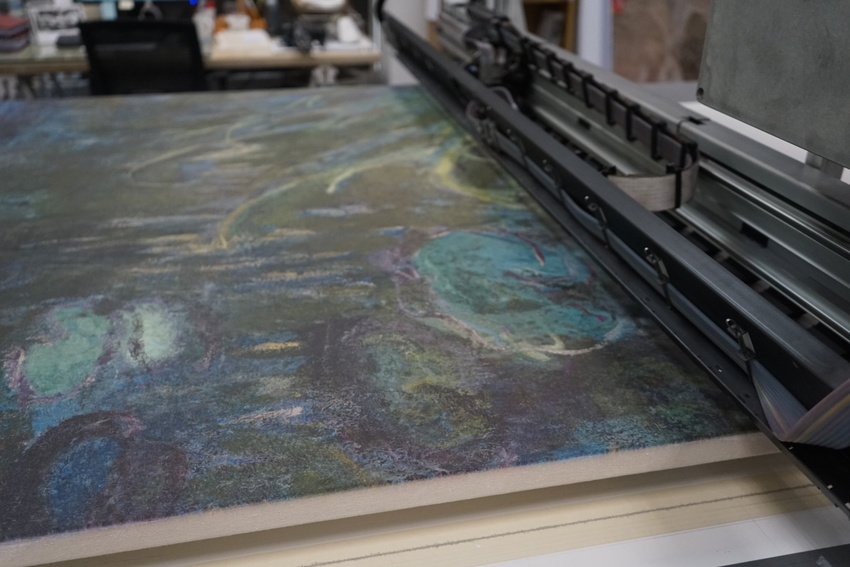 Pringting the colour onto the textured canvas