Factum Foundation is working with the Fundación San Millán de la Cogolla on the digitisation of the Glosas Emilianenses, considered to be the earliest surviving Castilian-language text, in Madrid’s Real Academia de la Historia. During the first week of April, Factum Foundation recorded several pages of the manuscript in high resolution, photographing the colour and using the Lucida 3D Scanner for the surface.
Learn more on the project

We are working on ways to reuse Alvar Aalto's Silo in Oulu as a creative research centre focused on the documentation of industrial buildings in northern Europe, on innovative technologies to record environmental change, and research into sustainable materials including cellulose.

Recording carpaccio's Young knight in a landscape at the Thyssen-Bornemisza

Factum Foundation is delighted to announce a new collaboration with the Thyssen-Bornemisza National Museum, beginning with the high-resolution recording in 3D and colour of Vittore Carpaccio's Young Knight in a Landscape (1510), one of the most celebrated works in the collection. The recording will take place in late March, in the same room where the painting is being cleaned and restored in full view of visitors.
Learn more

Next year is the hundredth anniversary of the discovery of the tomb of Tutankhamun by Howard Carter and his team. Factum's 3D and colour data, recorded in 2009, is in demand and we are following instructions from the Egyptian Ministry of Tourism and Antiquities about how to make the data accessible.

More on our work on Tutankhamun

Ceilings for the Spanish Gallery at Bishop Auckland

By merging 3D recording, 3D modelling, virtual simulation, architectural details and craftsmanship, we are revisiting the relationship between Islamic, Christian and Jewish influcences on Spanish interior design. After months of work, the four complete ceilings will be leaving Madrid in a few days to be installed in the Spanish Galleries in the north-east of England. More on the exhibition display

Recording and facsimile project for the Benaki Museum

In honour of the 200th anniversary of the formation of the Greek State, the Rothschild Foundation has commissioned a facsimile of Sir Thomas Lawrence’s portrait of John Capodistria, which normally hangs in the Waterloo Chamber at Windsor Castle and forms part of the Royal Collection. After its recording in high-resolution in August 2020, the painting was re-materialised as a facsimile and will be on display at the Benaki Museum. More on the project

Factum Foundation’s team is currently finishing the ground recording of the Nabatean heritage site of Hegra and the dadanite site of Dadan, expecting to soon move to Jabal Ikhmah and Abu Ud.

Commissioned by the Royal Commission for AlUla (RCU), this work is the largest high-resolution 3D recording project carried in the Kingdom of Saudi Arabia. Learn more

Recording The Sacrifice at Lystra tapestry in Mantua

Between February 24th until the first week of March, a team from Factum Foundation has been recording the tapestry made after Raphael's Cartoon The Sacrifice at Lystra at Palazzo Ducale in Mantua, Italy. The recording, arranged with Arnold Nesselrath, is part of the ongoing research into the production of tapestries and the cartoons from which they were made.
Learn more

Factum Foundation is delighted to announce that, after the closing of the exhibition 'La riscoperta di un capolavoro' at Palazzo Fava, the facsimile of the Polittico Griffoni will remain in the city of Bologna, on display at Palazzo Pepoli. It will also return to the Basilica of San Petronio on occasion of the city's patron saint day. It is a demonstration of how digital technology can create new ways of studying, displaying, sharing and experiencing a work of art.

Installation of a Canon Elevated Printer in Factum's Madrid workshops

We are delighted to bring our collaboration with Canon Production Printing to the next level with the installation of an elevated printing system in our workshops in Madrid. Factum Arte and Factum Foundation have been working closely with Canon since 2015, applying their elevated printing technology to the reproduction of exact facsimiles using Factum’s approach to 3D scanning and colour management. More on our 3D printing outputs

From 25th to 27th January, Factum Foundation carried out the recording of the Chart of Juan de la Cosa, from the collection of the Museo Naval in Madrid, using non-contact technologies: the Lucida 3D Scanner for the surface and composite photography for the colour. The digital data will belong to the Museo Naval for study and conservation purposes. An exact facsimile of the map will also be produced and will be part of the exhibition display at the Spanish Gallery in Bishop Auckland. More on the project

The Raphael Cartoons at the V&A: the digital content is now available

On January 25th, the V&A launched a new online platform where the data from the Raphael Cartoons, recorded by Factum Foundation in high-resolution 3D, colour and infrared, was made available to the public for the first time.

In collaboration with the Spanish Museo Nacional de Escultura and in agreement with the Spanish Ministry of Culture, Factum Foundation carried out the recording of the missing fragments from the sepulchre of Cardinal Tavera, sculpted in 1552 by Alonso Berruguete. The white marble sepulchre was damaged during the Civil War and plaster fragments from the only cast of the original have been since kept in storage within the Museo Nacional de Escultura. More on the project

Factum Foundation has initiated a collaboration with a team from the Physics, Materials Science and Engineering, and Art History and Art Departments at Case Western Reserve University in Cleveland, Ohio. The goal is to apply machine learning methods to surface profilometry images of paintings in order to attribute stylistic components of brushwork in some of the later paintings of El Greco, with the aim of exploring differences between the hand of El Greco and those of his son, workshop and later interventions. More on the project

DIGITISING THE SEPULCHRE OF CARDINAL TAVERA In May 2018, a team from Factum Foundation carried out the digitisation of Cardenal Tavera’s sepulchre in Toledo. After creating an accurate 3D model from the data, a facsimile of the marble sarcophagus will be part of the exhibition display at the Spanish Gallery in Bishop Auckland. More on the project 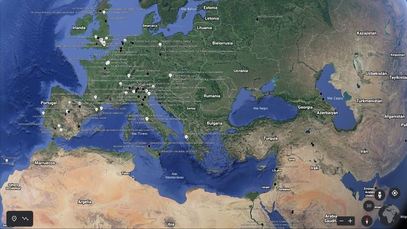 Since its creation in 2009, Factum Foundation has worked on recording and facsimile projects across the globe. We can now present this visually on Google Earth.