Factum Foundation is collaborating with the Trust for African Rock Art (TARA) and the University of Calabar (UNICAL) on a project aimed at documenting, conserving and raising awareness about the Bakor monoliths, also known as the ‘Cross-River’ or ‘Ikom’ monoliths, and locally referred to as ‘akwanshi’ or ‘atal’. The Bakor monoliths take their name from a group of linguistically and ethnically related communities (‘clans’) in an area of approximately 350 square miles in the Middle Cross River region in which they are exclusively found. The word ‘Bakor’ means ‘come and take’, a name that was chosen as a collective title because the phrase is identical in the languages of each of the original eight clans that make up the Bakor people.

The monoliths are primarily basalt or limestone that has been naturally shaped in nearby riverbeds and range from 20 cm up to 3m in size. The natural forms of the rock are embellished by carvings of facial features, beards, decorative markings (probably indicating scarification), protruding navels, etc., which distinguish each as an ancestral clan leader. The age of the monoliths remains the subject of speculation, particularly in the absence of proper archaeological investigation. It seems probable that the tradition developed over a number of centuries, gradually falling out of practice over the period of British colonial influence. This must, however, have occurred some time before direct colonial engagement in the area as the earliest account, Charles Partridge’s ‘Cross River Natives’ (1905), demonstrates that the inhabitants had already lost the custom of producing them. The situation of cultural disconnect today has been exacerbated by the strong influence of Pentecostal Christianity in the area, which associates the monoliths with 'juju'.

An extensive survey of the monoliths was commissioned by the National Museum in Lagos and was carried out by Philip Allison, formerly of the Nigerian Forestry Department, over a period of two months in 1961 and 1962. This put the number of carved stones at 300. In the course of three periods of fieldwork, of about one month in total, Factum Foundation, TARA and UNICAL have visited all the major sites recorded by Allison and have, in addition, identified a handful of others not yet recorded. The condition of the monoliths and their sites vary greatly: the greatest threat to their preservation comes from forest clearance and subsequent farming activity, in particular slash and burn methods which heat up the stone, causing it to crack as it cools.

Allison’s survey has proved an invaluable resource in addressing the other chief problem that the monoliths have faced: theft. It has enabled the identification of monoliths in international museum collections as well as a number of private galleries and collectors. Research indicates that the monoliths were predominantly stolen from the sites in the 1970s, following the crisis of the Biafra Civil War, and smuggled over the nearby border with Cameroon before entering the antiquities market. The issue of theft has led to the inclusion of the monoliths on ICOM’s Red List of West African cultural objects at risk. In addition, the critical condition of the Bakor monoliths has lead to their being listed on the World Monuments Fund’s ‘World Monuments Watch’ (inscribed in 2008) and UNESCO’s tentative list of World Heritage sites.

The immediate goals of the project are to promote the preservation and understanding of the monoliths at a local and an international level:

The long-term goal of the project is to have the Bakor monoliths registered as a World Heritage Site.

The generous grant from the Carène Foundation will allow the upcoming exhibition about the monoliths at the British Museum (planned for November 2022) to travel to the sites in Nigeria and be installed as a permanent display in Alok. 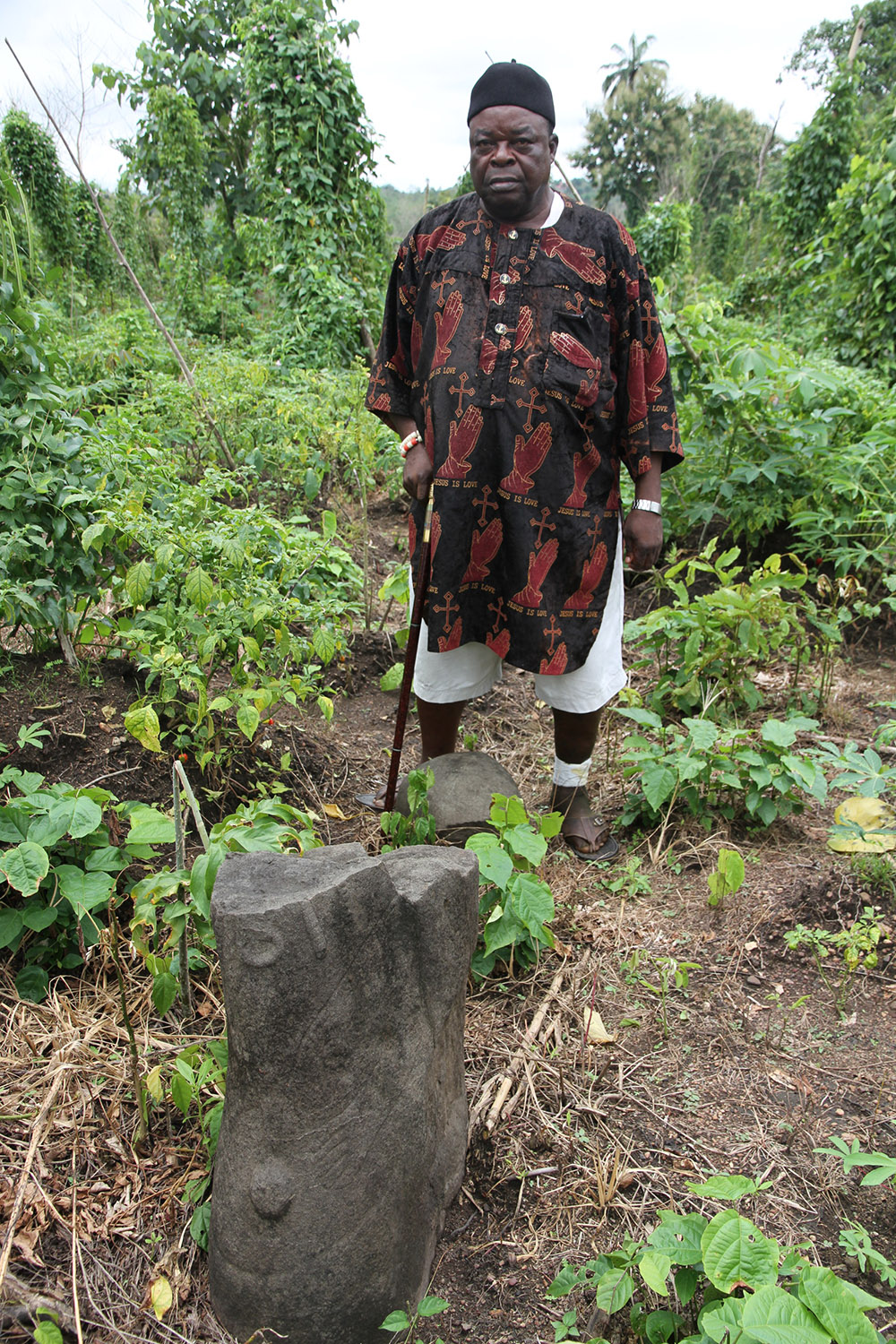 It is with great sadness that Factum Foundation reports the passing of Chief Sylvanus Akong, known to his friends as Orlando, and recognised by all as a friend of the Bakor monoliths.

In his early career, Orlando was an educator and he successfully founded and ran two schools. In 1983, at the recommendation of the great Nigerian archaeologist Ekpo Eyo, he was appointed by the National Commission for Museums and Monuments as the curator of the Alok Open Air Museum, located in his home village.

Respected and admired throughout the Bakor communities, Orlando was an invaluable source of knowledge and help to UNICAL, ABU, Factum Foundation and the Trust for African Rock Art's collaborative project to preserve the monoliths. He will be sorely missed by all those who encountered him.

‘The Ancient Rock Art of Nigeria’